You Tarzan, me-thane: Exposing the most powerful source of greenhouse gas 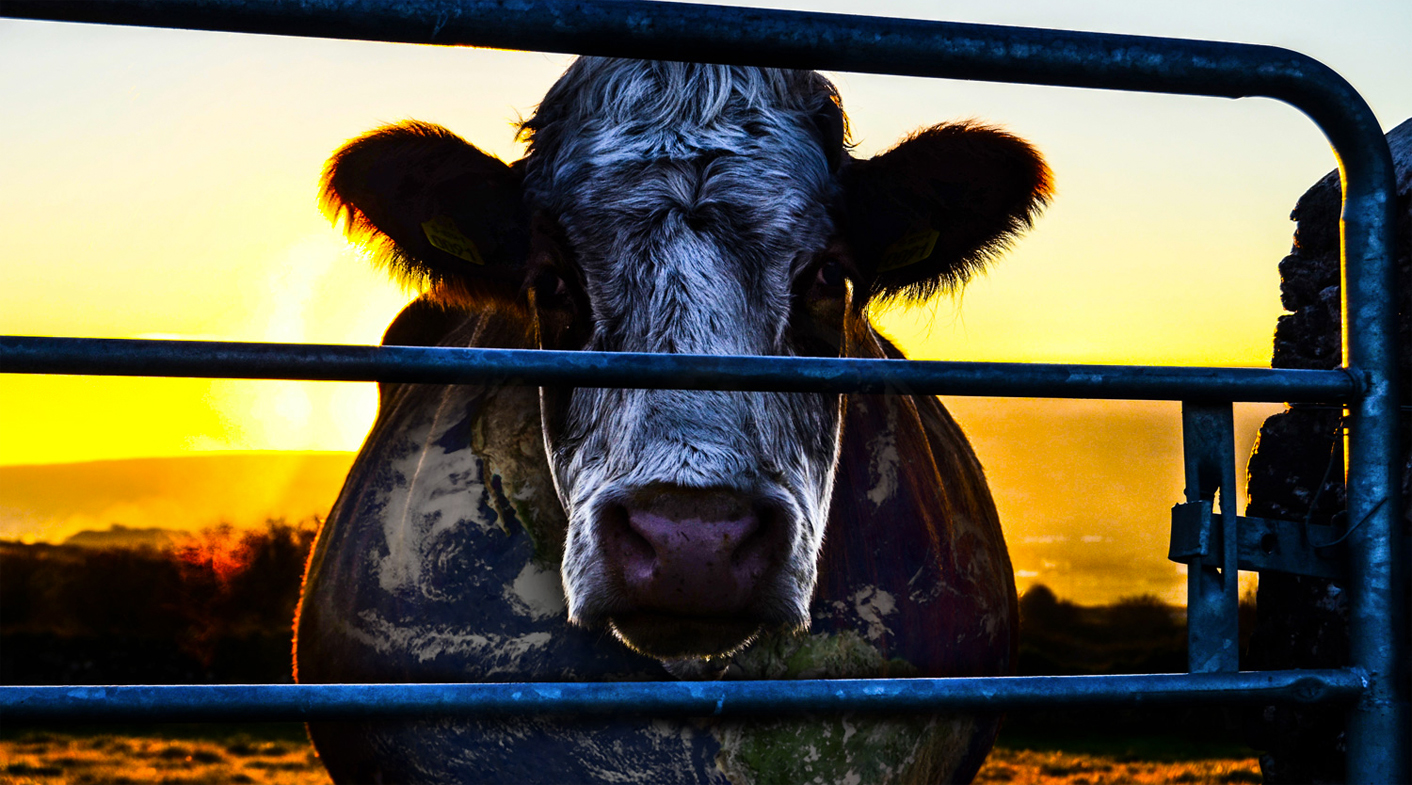 The filmmakers of environmental shock-documentary Cowspiracy expected to find solidarity among environmentalists. They were wrong. By MARELISE VAN DER MERWE.

“If I had a stick of butter for every time I was asked about banting…” says Brett Thompson wryly. Thompson is national programme manager for Meat Free Mondays, which, in association with While You Were Sleeping, is bringing Cowspiracy: The Sustainability Secret to South Africa.

Thompson, it seems, is fighting an uphill battle. At a time when the posh and privileged are guzzling steaks and cheese like it’s going out of fashion in an attempt to trim their bottoms, Thompson and his team’s attempts to raise awareness around curbing the consumption of animal products must feel like pushing a snowball up a hill.

“I am really concerned about what this diet means for animal welfare,” he says. “The high fat, low carb diet requires the intake of large amounts of animal protein and by-products which results in more suffering imposed on factory farmed animals.”

Moreover, he adds, it doesn’t even help that the meat is meant to be organic and grass-fed. This is the privilege of the few: around 80% of our meat is factory-farmed, and there just isn’t room to meet the demand otherwise. “Is it possible to feed the nine to 12 billion people that will inhabit this planet by the end of the century [on a meat-heavy] diet?” he asks. “I would argue no. We are already struggling to feed seven billion mouths presently because of the meat-laden Western diet, which depletes the resources of this planet. [Increasing the meat intake] would only worsen current world hunger and result in more environmental damage.

“Vaclav Smil, author of Feeding the World, estimated that if everyone ate a Western diet, we would need 67% more land… now imagine if all those animals were free range! We just don’t have enough planet.”

But hey, we didn’t come here to talk about banting. We came here to talk about Cowspiracy, which is being screened around the country this month. Filmmakers Kip Andersen and Keegan Kuhn initially simply wanted to find out what they could do to live more consciously to protect the environment. You know, recycle, ride a bike, use less water, that sort of thing. Andersen had seen An Inconvenient Truth and wanted to do his bit.

What came out of his research was a surprising amount of stonewalling from environmentalists and anti-environmentalists alike, he says. Nobody seemed to want to confront the single biggest contributor to greenhouse gas emissions: the animal agriculture industry. (Ironically, even Al Gore’s film – the inspiration for Cowspiracy – hadn’t really touched on it.)

Animal agriculture accounts for 51% of all greenhouse gas emissions produced and released into Earth’s atmosphere, according to a 2009 Wordwatch Institute report. Yet, amazingly, decreasing meat consumption does not make it onto the top three in the agendas of many – if any – major environmental organisations.

“I was shocked that the organisations I had trusted were not talking about it. I tried emailing and calling these groups for months in order to get answers, but no one would ever get back to me. I realised that I was going to have to take a camera into these organisations’ headquarters if I wanted answers,” Andersen says.

The bottom line, the film argues, is that the attempts at saving the planet that are currently underway are simply not enough. They miss the point.

Growing food organically or protecting expanded areas of the ocean will not do enough. Keeping timber operations out of the rainforests will not be enough. Cutting down on use of aeroplanes and vehicles and switching to solar power will not be enough. All this amounts to aiming solutions at the peripheral problems.

In a Meatonomics interview, Kuhn added, “These groups and organisations are doing good work, but they are misleading their supporters and the public into believing the fossil fuels are the only environmental ill we face. Absolutely the fossil fuel industry is causing huge ecological devastation, but when compared to what animal agriculture is doing to the climate, water pollution, topsoil erosion, deforestation, species extinction, ocean dead zones and habitat destruction, it pales in comparison.”

Cowspiracy is chock-full of outrageously quotable statistics. For instance, if you wanted to save over 600 litres of water, you could not shower for two months… or you could skip one hamburger.

And: It takes a thousand litres of water to make just one litre of milk.

Or: Pigs in the US consume more fish than human beings do. One of the best ways to help save fish is not to eat pigs.

Animal agriculture uses 55% of the water in the US. Homes use just five percent.

The demand for animal farmland is responsible for 80% of the destruction of the Amazon rainforest.

“First and foremost, the most effective step is to learn the truth and spread the message far and wide as to what is happening to our planet and, more importantly, the real reason why,” says Andersen. “Many people are not aware of the devastation caused by rearing animals for food and other products but, once they do, hopefully they will rally to the cause and evolve the way they and their loved ones eat and how they spend their hard-earned money.

“The number one way to curb climate change is to adopt a plant-based diet and stop supporting industries that are serving to obliterate the earth. Plain and simple.”

But is it realistic to just expect everybody to become vegan? Probably not. This, however, is not an insurmountable problem, believes Thompson. Enter Meat Free Mondays, which he believes is already having a massive impact. “We have done our presentation to nearly 15,000 people in South Africa and have had over 7,000 pledges, although the number of people actually adopting Meat Free Mondays is probably higher.” Their research, says Thompson, suggests that a significant percentage of South Africans are aware of the campaign, which also has a strong online presence and regularly posts recipes on Facebook and Twitter. Globally, the campaign is being promoted in 36 countries.

The idea, says Thompson, is to remain aware of the impact each choice can make. “Your choices make a massive impact,” he says. “Every day you have the opportunity to be an agent for positive change on this planet – not only one opportunity, but three.”

Some examples of this impact: If all Americans ate no meat, chicken or fish for just one day a week, this would result in the same carbon savings as taking 19.2 million cars off the road in the States for an entire year. If every South African gave up eating meat for one day a week, on the other hand, it would be equivalent to the annual carbon absorbed by 1,000,000 acres of pine forests. In terms of water consumption, each South African committing to a Meat Free Monday could save approximately 3,360 litres of water per week. And in terms of food shortages, it requires 500 times as much land to produce one kilogram of beef as it does to produce one kilogram of vegetables. By some estimates 20 vegetarians can be fed on the amount of land needed to feed one person consuming a meat-based diet.

“Every meal you choose to eat plant-based foods instead animal products, you are part of the change that will end animal cruelty, mitigate global depletion of resources and improve your health,” says Thompson. “It starts with you and it’s that simple.” DM

Photo: A poster cow for Cowspiracy.

Monday 17th November at The Bioscope 7pm in Johannesburg, Monday 24th November 6.15pm at The Labia Theatre in Cape Town and Monday 1st December at The TBA, Durban.

The Bioscope Bookings and enquiries www.thebioscope.co.za

* To get you started after the weekend, here is the writer’s recipe for a Turkish favourite, Imam Bayildi, meaning ‘The Imam fainted’. It makes a fantastic side or main. The legend goes that the Imam ate his wife’s dish and it was so delicious – and so full of olive oil – that he passed out. You’re welcome.

Preheat the oven to 180 degrees (or lower, depending on how much time you have. When roasting, slower is always better). Partially peel the aubergines – you should peel in strips, leaving about an inch of the peel on the aubergine in between each peeled section, so that the aubergines end up looking striped. Cut the aubergines lengthwise and cut a few slits into them, also lengthwise. Cover in a generous amount of salt to release the bitter juices. Allow to stand.

Heat half the olive oil over medium heat. Add the onions, chopped, and stir till translucent but not browned. Add the garlic (crushed or cut) and the tomatoes, also chopped. Allow to simmer until the tomato has reduced somewhat. Add the sugar, lemon juice, dill and parsley (be generous with the herbs). Salt and pepper to taste.

Spoon the stuffing into the aubergines, filling the slits you cut as well. Drizzle the remaining olive oil on top. Pour about a cup of water into the baking tray before roasting, otherwise the aubergines will dry out. Bake in the oven for approx 35 – 45 min (longer if you set it lower), or until the aubergines are tender and not soggy.

Variation: Some people include currants and/or toasted pine nuts in the stuffing.