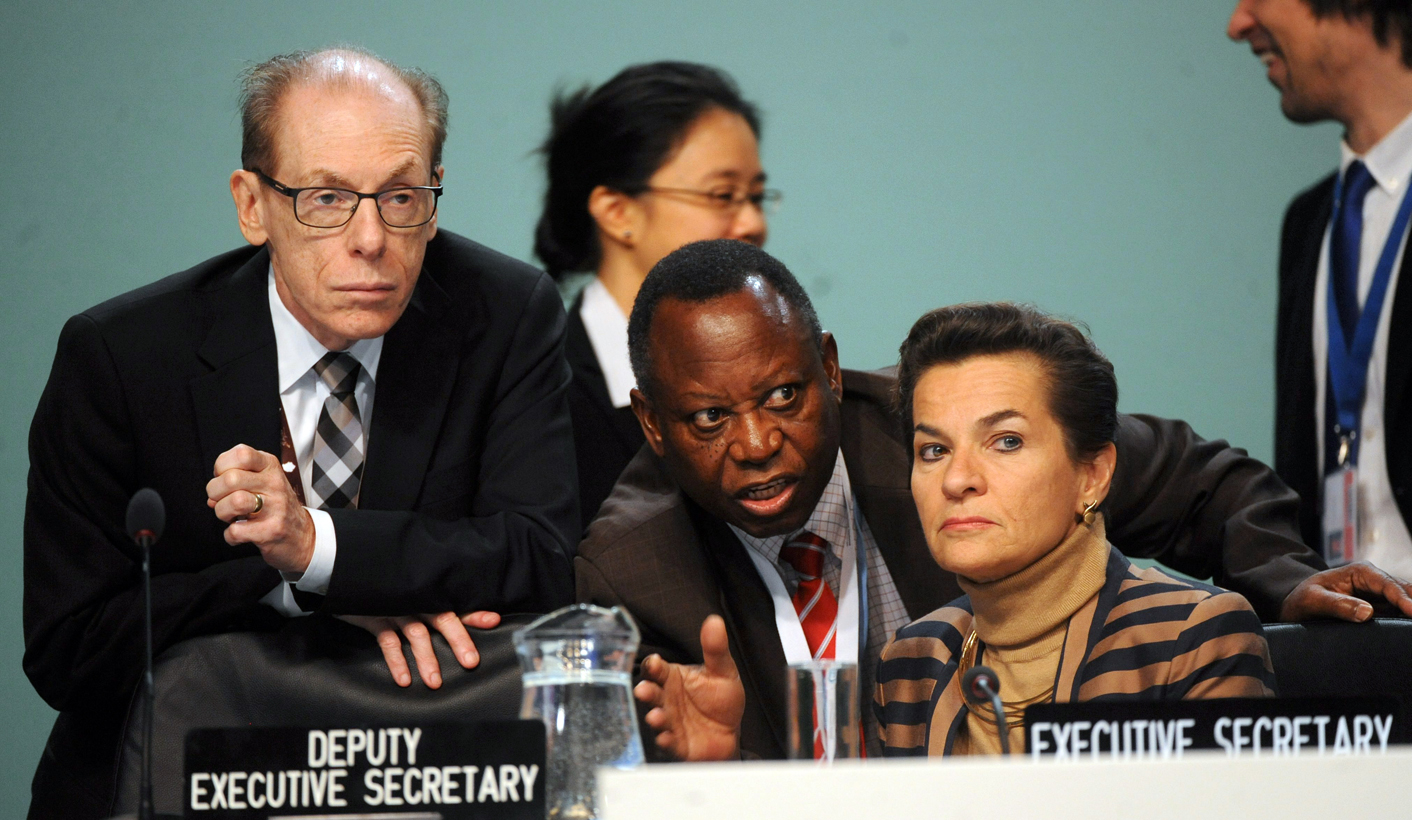 Next year in Paris, governments will have before them an extraordinary opportunity to strengthen the global response to climate change. To succeed, they must draw on the lessons learned over two decades of climate policy, and produce a practical agreement capable of bringing everyone on board. By VALLI MOOSA and HARALD DOVLAND.

Efforts over the years have gone in different directions. Toward the more ‘top-down’ end of the spectrum, the Kyoto Protocol introduced a system with legal and technical rigour, but now encompasses less than 15% of global emissions. The more ‘bottom-up’ approach of the subsequent Copenhagen and Cancún agreements achieved broader participation, but with strictly voluntary pledges well short of a 2C° pathway. Both approaches demonstrated strengths and weaknesses; neither has delivered a level of effort commensurate with the challenge.

Our aim in Paris must be a ‘hybrid’ approach, one that combines top-down and bottom-up elements to achieve broad participation and strong ambition.

That, in fact, is the core message to emerge from a promising dialogue that the two of us are privileged to co-chair. The Toward 2015 dialogue organised by the Centre for Climate and Energy Solutions (C2ES) brings together officials from more than 20 countries for an ongoing series of informal discussions on options for a 2015 climate agreement. Our discussions have been spirited, and they have been productive.

The participants (taking part in their personal capacities) come from developed and developing countries large and small. They naturally bring very diverse views, shaped by differing national perspectives and by differing expectations of the UNFCCC’s role in catalysing a stronger global effort.

We have produced a report offering our summation, as co-chairmen, of important threads from several days of intense give and take. In some areas we were able to sketch out points of convergence; in others, we highlight critical issues and options. It’s important to note that, because the report reflects only discussions to date, it does not directly address some issues such as finance that will be critical to a successful outcome in Paris.

Here are key points that have emerged:

The idea of a ‘hybrid’ approach is to balance two critical dimensions – national flexibility and international discipline – in ways that promote both broad participation and strong ambition. Critical elements include a core legal agreement defining countries’ obligations, a rules-based system ensuring transparency and accountability, and a dynamic element aimed at strengthening ambition over time.

UNFCCC parties have already initiated a bottom-up pathway providing countries considerable leeway in defining the form and level of their commitments, the “intended nationally determined contributions” governments will begin presenting early next year. A central question is how this flexibility can in some way be bounded to promote greater ambition and accountability, without weakening participation.

To be credible, countries’ intended contributions must be quantifiable. But beyond the numbers themselves, it is important that countries “tell a story” about how the goals will be achieved. It is especially important that a party explain how its contribution will be supported by domestic policies, and why it believes it is ambitious and equitable.

Some countries envision their contributions running until 2025, others through to 2030. A common end date would make a side by side comparison easier, but if that cannot be agreed, there are other options. Countries could provide a firm number for one timeframe and an indicative number for the other. Or they could agree on a common timeframe for reassessing and adjusting contributions. This would effectively initiate a second round of contributions from those preferring a 2025 end date, and a mid-term review for those preferring 2030.

Getting intended contributions on the table well before Paris enables a period of ex ante consideration that can help promote ambition by ensuring the clarity of countries’ offerings. It will allow governments, independent experts and civil society to assess intended contributions both in terms of equity and relative to the 2°C goal. Any formal ex ante process within the UNFCCC should be non-adversarial. And while some countries may be able to strengthen their contributions by Paris, others likely will not.

It is critically important that countries’ contributions be formalised in some way in Paris. Parties therefore should strive for as much clarity as possible by Paris on relevant rules such as accounting for land use or the use of emissions markets. Any further negotiation of rules post-Paris should not deter parties from ratifying the agreement, the point at which their contributions would be finalised.

The Paris agreement presents an unparalleled opportunity to elevate and advance climate adaptation. But political parity between mitigation and adaptation may be better achieved through means other than “nationally determined contributions.” The agreement could strengthen adaptation under the UNFCCC, and within countries, by establishing a clearer global vision for adaptation; creating a framework for presenting national adaptation efforts; streamlining and enhancing UNFCCC institutions; and mobilising resources to help particularly vulnerable countries cope with climate impacts.

One important cross-cutting issue is the respective legal form and character of the various elements of the Paris outcome. The core legal agreement should at a minimum bind parties to procedural commitments to, for instance, inscribe their contributions, implement supporting domestic measures, report on implementation, and participate in procedures holding them accountable. Some believe that making parties’ contributions legally binding would encourage ambition and participation; others believe it would have the opposite effect.

Another cross-cutting issue is differentiation. There is clear unanimity that the UNFCCC principle of “common but differentiated responsibilities and respective capabilities” will apply. The question is how. One issue is the degree to which traditional categories (such as Annex I and non-Annex I) or updated categories are relevant in differentiating parties’ responsibilities. A related issue is whether the de facto self-differentiation of “nationally determined” contributions can itself produce a distribution of effort broadly perceived to be equitable.

Our report does not speak to all of the critical issues that will be on the table in Paris. But we believe it helps define the broad contours of a deal. And given the very constructive spirit in our discussions to date, we believe that remaining differences can be bridged. We are confident that governments will seize the opportunity in Paris to forge a practical agreement – one that gets everyone on board, inscribes initial contributions, establishes a clear system of accountability, and works to strengthen ambition over time. DM

Additional information on the Toward 2015 dialogue, and the Report of the Co-Chairs, are available here.

Valli Moosa and Harald Dovland are co-chairmen of Toward 2015: An International Climate Dialogue.