Marikana: Time to meet the commissioners 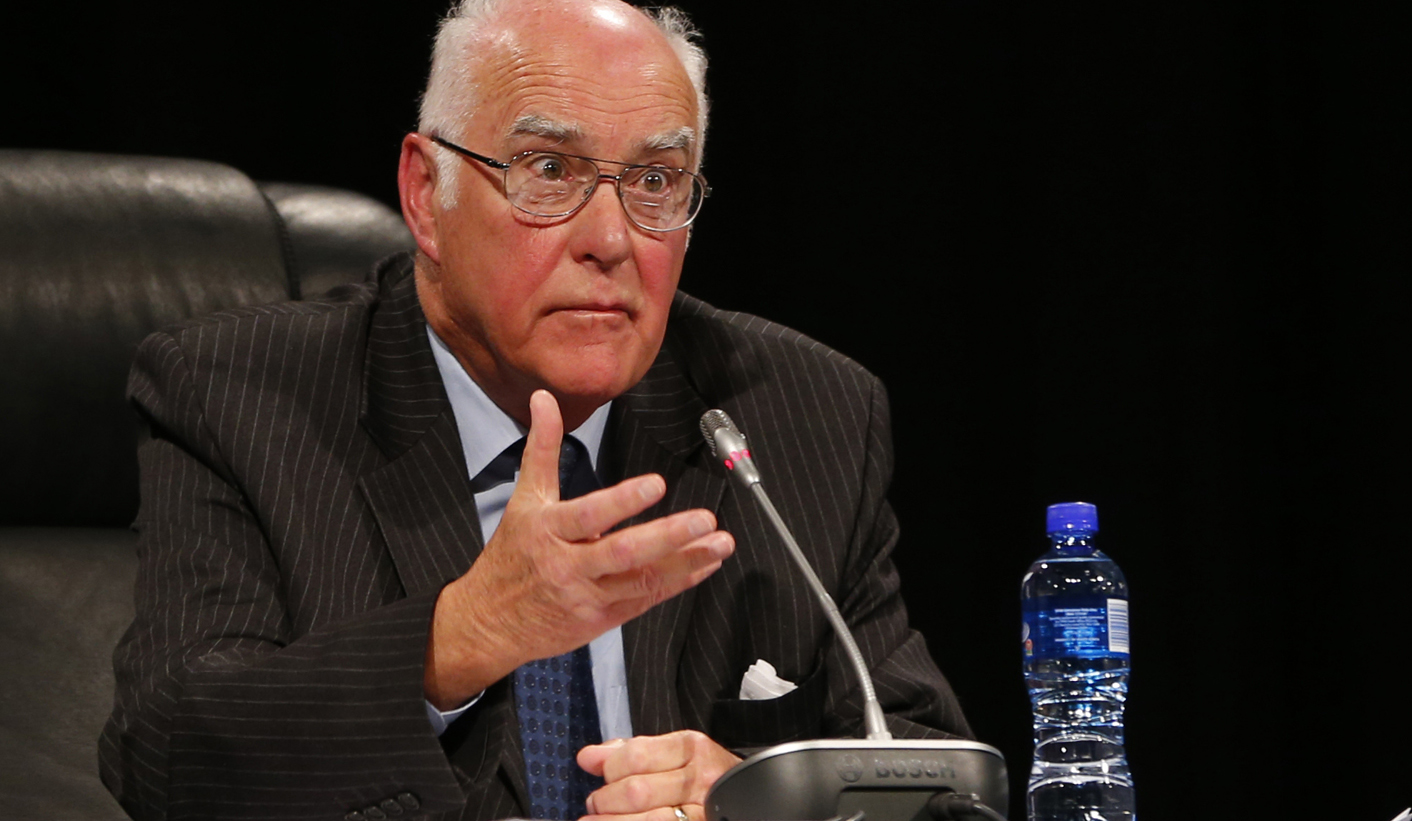 Legal teams continued to present closing arguments at the Marikana Commission of Inquiry on Thursday, but with evidence having concluded, justice is now essentially in the hands of three people. It's almost inconceivable they will believe the police argument. Or is it? By GREG NICOLSON.

His walking stick resting by his side, George Bizos addressed the Commission. “The reputation of the administration of justice during the apartheid regime was at a very low level as a result of findings of commissions that no one was to blame,” he stammered. “It started with Sharpeville in 1960 and finished with the massacres in the Vaal Triangle in the early 90s.”

A grandfather of SA fight for justice, Bizos knows about whitewashes and cover-ups. He acted for the accused in the Rivonia Trial, the families of activists who were killed in detention, and the relatives of Steve Biko and Chris Hani at the Truth and Reconciliation Commission. “A finding by the commission that the police are not responsible for any of the deaths will undermine the administration of justice in our country and the rule of law,” Bizos said on Thursday.

After two years of hearings, the Marikana Commission is hearing its final arguments. Justice’s fate is now in the hands of the three commissioners appointed by President Jacob Zuma after the massacre in 2012: Retired Judge Ian Farlam, Advocate Pingla Devi Hemraj SC, and Advocate Bantubonke Tokota SC. As chairman, Farlam has ruled on procedural matters during the hearings, but in writing their report for the president, each commissioner has an equal voice. What they produce will determine whether there is justice for Marikana or, as Bizos fears, South Africa will see another inquiry legitimising massacre.

There are concerns. On Thursday, Farlam said parties had complained the Commission has been unfair. “We have tried very, very hard to be fair to everybody. We’ve received a lot of criticism.” The concerns go beyond procedural issues. There are questions about how each commissioner will treat the damning evidence against the SAPS.

The face of the Commission, Farlam, briefly acted as a prosecutor for the state during apartheid and then as a member of the Cape Bar, obtaining his silks in 1981, before serving as a judge in the Orange Free State Provincial Division and Cape Provincial Division. He was permanently appointed as a Supreme Court of Appeal judge in 2001. He recently made news when the Spy Tapes revealed former Scorpions boss Leonard McCarthy called him “that cunt” for ruling against the interests of Thabo Mbeki’s camp in a Zuma case.

At the Marikana Commission, some of the injured and arrested mineworkers believe Farlam is biased after his run-ins with their counsel Dali Mpofu, who can test the Commission’s patience. But the chairman is largely seen as objective, if somewhat conservative and responsible for the inquiry’s meandering pace and repeated delays.

Much less is known about Tokota and Hemraj. Miners have accused both of being behind the abandoning one of the in loco inspections at Marikana after AMCU members threatened an NUM member. Family members have privately expressed concerns about which way the pair will sway.

Tokota has been noticeable for his silence. He is reported to have worked for the Ciskei government before joining the Pretoria Bar in 1996, becoming an SC in 2006, and has acted as a judge in the Eastern Cape Labour Court, North Gauteng High Court, and the Mthatha High Court. He represented Pretoria High Court Judge Nkola Motata in his drunk-driving trial and Constitutional Court Justices Bess Nkabinde and Chris Jafta in relation to the misconduct case of Western Cape Judge President John Hlophe.

During closing arguments this week, Tokota has found his voice and posed questions to those highly critical of the police that appear to deflect responsibility.

As the South African Human Rights Commission (SAHRC) began its arguments on Wednesday, Tokota interrupted, “Why was the Human Rights Commission not involved during the incident when people were dying there? […] Why were you not involved there?” He suggested the SAHRC should have intervened in Marikana, despite it being a labour relations dispute and key role players such as Lonmin refusing to negotiate with the miners. (The SAHRC’s constitutional powers include investigating and reporting on human rights, securing redress for rights violations, researching and educating.)

Admitting he had not finished reading the organisation’s submissions, Tokota continued on Thursday. He asked, “Bearing in mind your mandate in terms of the Constitution, I didn’t have an opportunity to go through all the pages here, is there anything right which was done by the police?” (The SAHRC is participating in the Marikana Commission due to a complaint against the SAPS, while it has also submitted recommendations for addressing the broader causes of the problem.)

While Takota has been quiet throughout most of the Commission, there’s more corridor talk about Hemraj, with multiple legal teams, injured and arrested miners, and relatives of victims having mentioned concerns to Daily Maverick that she could be biased towards the police.

Hemraj was admitted as an advocate in 1980 and was the first black woman to become an SC in KwaZulu-Natal. She has acted as a judge in Durban, Pietermaritzburg, Port Elizabeth and Grahamstown and at the Commission is said to have an abrasive character. She has appeared in the media for defending one of Zuma’s bodyguards on trial for shooting at a motorist. On Tuesday she appeared in court in support of KZN Judge President Chiman Patel, accused of swearing at a court clerk.

The SAPS position at the commission is summarised in its heads of argument. “The position of SAPS in these proceedings, and specifically in relation to persons who died as a result of police action, is that their deaths, where evidence is available, occurred in circumstances of self and/or private defence alternatively putative self or private defence,” reads the document, effectively saying the police should be exonerated.

A vast amount of evidence has discredited this argument and counsel from the evidence leaders, families of 36 of the deceased, the injured and arrested mineworkers, and the Legal Resources Centre have all called for the Commission to recommend the SAPS be investigated for criminal charges.

In their heads of argument, the evidence leaders dismantled the police case. They say the cops must take responsibility at scene one for poorly implementing a deficient plan, using disproportionate force and failing to provide medical treatment. “SAPS is plainly responsible for all the deaths at scene two,” they then conclude. At the Commission, the SAPS have been criticised for hiding and fabricating evidence, providing false testimony, and turning on any officers who break the chain of deceit.

Yet there is concern that the final report could possibly be swayed towards exonerating the SAPS. Critics, who do not want to be named because of their involvement with the ongoing inquiry, say Hemraj has been hostile towards witnesses suggesting the SAPS and specific officers should be held responsible. Meanwhile, they claim she is supportive of those who have upheld the police argument that the killings were in self-defence. At times, her style of questioning looks more like leading witnesses to say the right thing for the police.

Over a year ago, Hemraj placed on record that the commissioners “are not arriving at any conclusions, provisional or otherwise, until we’ve heard all the evidence and seen all the documentation in this process.”

It seems almost inconceivable that no police officer could be held criminally liable for the Marikana Massacre. But as George Bizos knows well, state inquires can can be used to legitimise the actions of those responsible rather than hold them to account.

“The police play a very important role in government and more importantly in a democratic state,” Bizos said on Thursday. “It would be completely unacceptable to the people of South Africa that have been following what has been said if the police are said [to be] not to blame for anything.”

While no one expected a massacre to occur in democratic South Africa, the difference between the past and present will be determined by commissioners Farlam, Tokota and Hemraj. Justice is now in their hands. DM