Senzo Meyiwa: One arrest as cops ask for privacy

Senzo Meyiwa: One arrest as cops ask for privacy 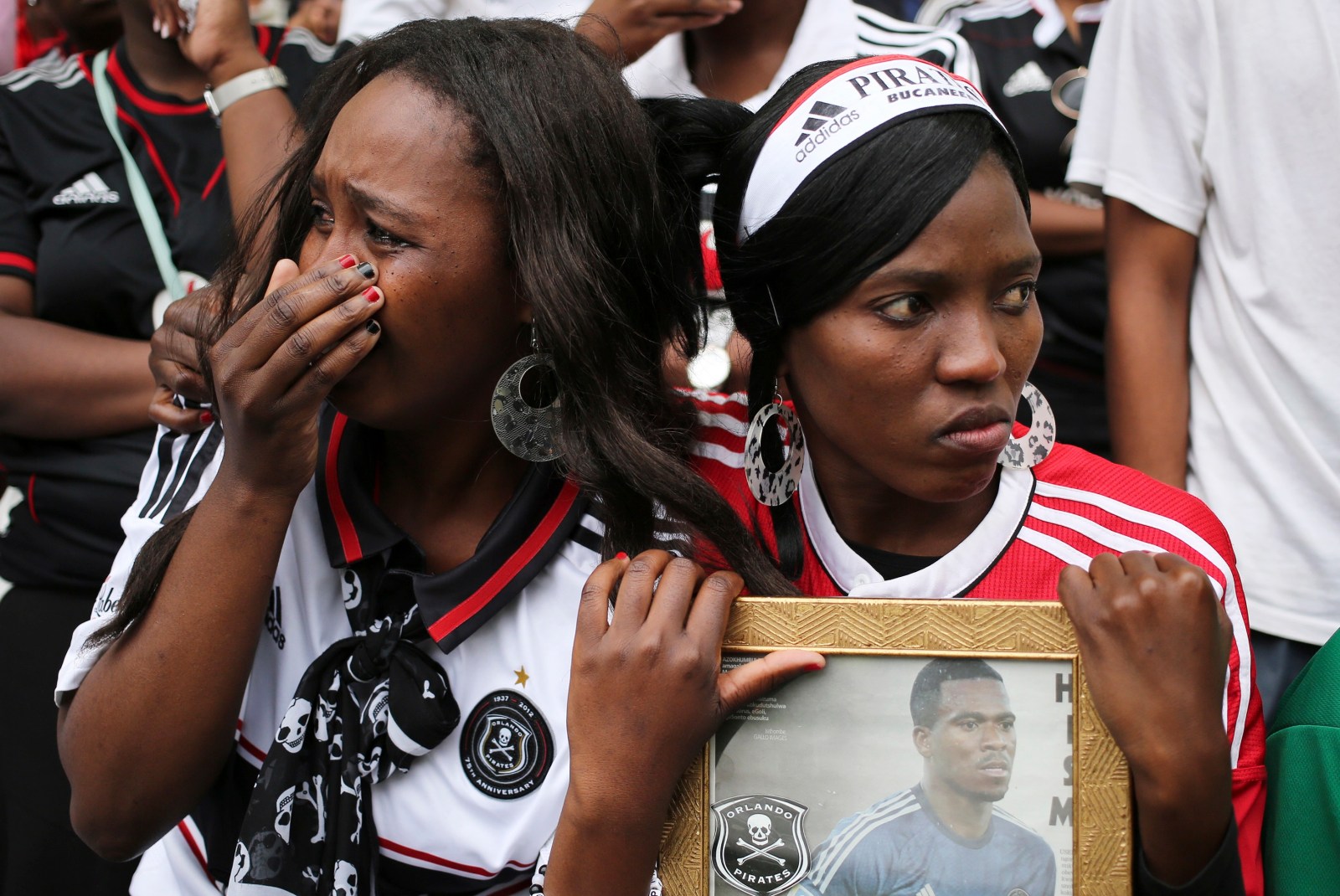 With one suspect arrested for the murder of Senzo Meyiwa, police are confident they have a case and are starting to focus on securing a successful prosecution. With the image of South African police in the pits, could this build faith in the SAPS? Unlikely, but it's too early to tell. By GREG NICOLSON.

Just over a week after the Orlando Pirates and Bafana Bafana star was killed, South Africa’s top detective Lieutenant-General Vinesh Naidoo said on Monday police were confident they got one of at least two people directly involved in killing Meyiwa. The 27-year-old was shot last week while visiting girlfriend Kelly Khumalo at her mother’s house in Vosloorus.

Police have questioned 13 people related to the killing of Meyiwa. A flood of tips from the public came in after identikits of the suspects were released last week and a multi-disciplinary task team was established by Police Commissioner Riah Phiyega the day after the shootings. “This type of loss is undesirable for our country and doesn’t bode well for our image,” said Phiyega when announcing the investigation.

“Since the death of Senzo Meyiwa last week Sunday, the investigation team has been working very hard, day and night, to find the perpetrators of this tragic act,” said Naidoo at the Gauteng SAPS headquarters on Monday. Police are now shifting the focus of the investigation to secure a conviction in court.

Zanokuhle Mbatha, 25 years old and from Vosloorus, appeared in the Boksburg Magistrate’s Court last Friday after police sought advice from the prosecutor. Investigators had no intention to place the matter on the roll but the prosecutor decided it’s best to go to court. Mbatha will be back in court on 11 November, facing charges of murder and robbery.

“But this does not mean the end of the investigation. We have cast the net as wide as possible to look at each and every possibility. We are busy putting the pieces of the puzzle together and it is coming into place nicely. We maintain that it was a robbery gone horribly wrong,” said Naidoo.

Mbatha’s family has said he does not match the profile issued last week of the suspects. However, the lieutenant-general said the depiction will never be 100% correct, but there are similarities. That the accused’s family has denied he was involved shows Mbatha is not helping identify alleged accomplices, said Naidoo. Responding to questions about a third person involved, Naidoo said police can only be sure two people were directly involved in the incident. A third person outside the house where the shooting happened might have been part of the crew or an uninvolved witness.

The SAPS said while it appreciated the media’s help and encouraged the public to share any relevant information (the R250,000 award is still available for information leading to an arrest and conviction), Monday was the last time police would brief the press on the matter. Further details will come out in court, said Naidoo, and detectives need time to work the case. He was reluctant to share details he said could jeopardise the investigation. “We would like to get all our ducks in a row,” said Naidoo.

While the investigation is only a week old and has already yielded one arrest, the high level of public interest and media speculation has made it difficult to discern the facts. When police detained and questioned 13 people, it was unclear whether some had been arrested or not. After suspects were questioned at the Beitbridge border post, media speculated that arrests had been made and pictures of the suspects, since cleared, circulated on social media. There was also confusion about Mbatha’s arrest and when he would appear in court. All this is in addition to gossip and rumours about Meyiwa’s relationship with Khumalo and alternate theories as to why the goalkeeper was killed.

Gareth Newham, the head of Governance, Crime and Justice at the Institute of Security Studies, said police had to look into all tips they received, but not all would receive equal weight. Investigators will be working on a theory and have an idea of what they are looking for. “The longer it goes on, the more pressure it builds,” said Newham, who added that it was smart of the police to be low key about the issue.

Clearly the case may have an impact on the public’s perception of the police and justice system, but Newham said it was too early to speculate. It all depends on how quickly the police can identify the suspects, make arrests and whether a conviction is secured. “Very, very few cases are treated like this… but it’s not unusual with high-profile people because it affects public opinion,” said Newham of the resources devoted to the investigation.

Catherine Moat, head of the Public Safety Programme at Wits School of Governance, also said it was hard to predict what impact the case would have on the perception of policing in South Africa; it may depend on which way a judgment finally goes. “The public is also swayed by the media. A hero was slain. It’s in the media and and people want cops to make an arrest,” said Moat.

While cautious to speak on behalf of the public, she said there was research showing a lack of recognition of police credibility and there was a perception in under-resourced areas that people were left alone on issues of crime. Then there were the common thoughts on how the justice system worked: “People believe that the police should be there to secure them against violence,” said Moat. People also can want justice served through a process of arrests, no bail, and harsh sentences. In reality, police cannot alone prevent violent crime, most of which occurs between people who know each other, and more needs to be done from the Department of Social Development to address community challenges such as drugs and alcohol, said Moat.

Both experts say while the Meyiwa case has received more police resources than the almost 47 killings each day in South Africa, only time will tell whether the high-level investigation changes perceptions of policing. DM