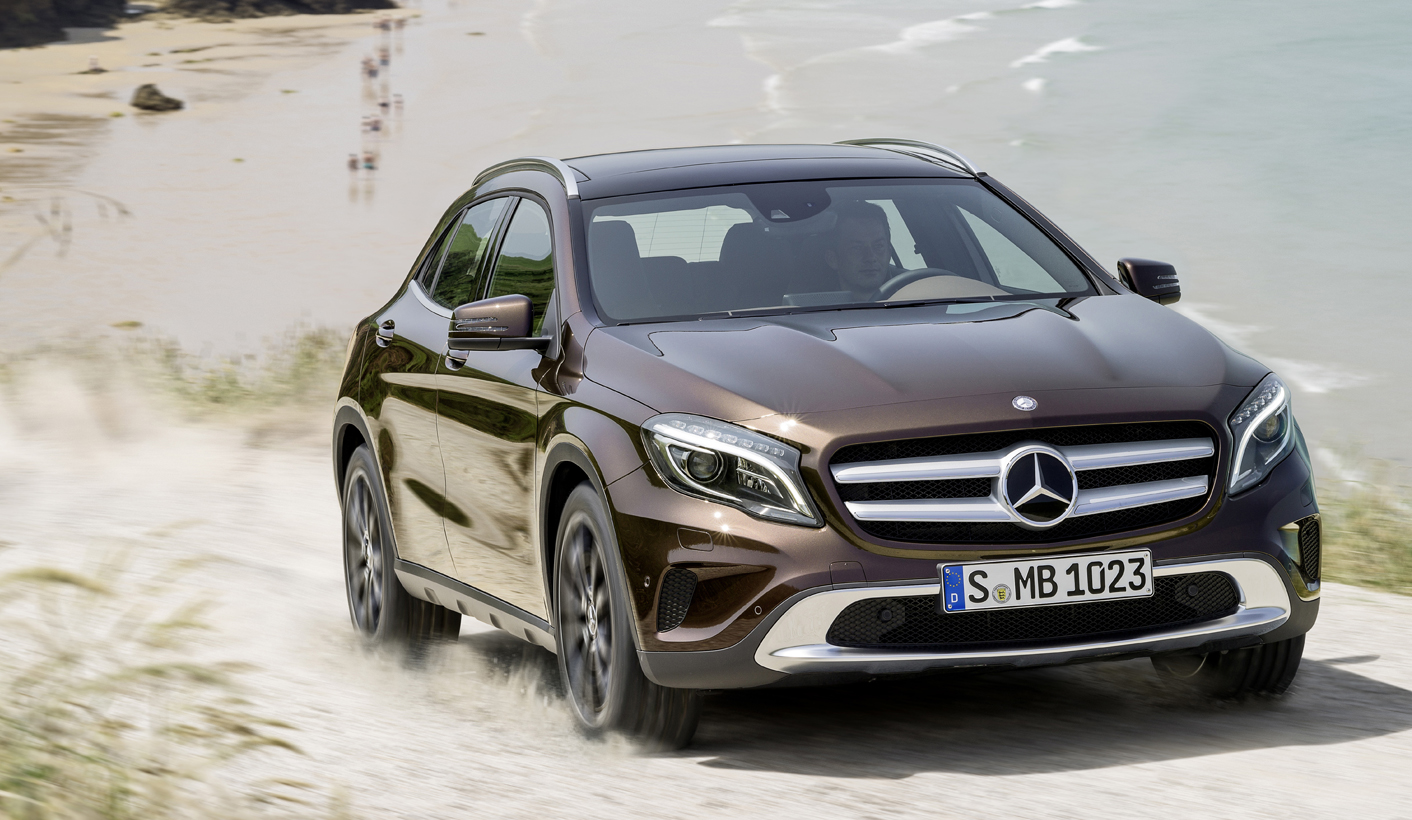 The sports utility vehicle, usually referred to as an SUV, has become a ubiquitous part of the motoring world. Large or compact, all-wheel drive or two-wheel drive, petrol or diesel, really rugged or more lifestyle-oriented – there’s an SUV for every taste and need. And it’s the compact SUV segment that’s showing the strongest growth in demand. DEON SCHOEMAN drives the latest interpretation of the genre from Mercedes-Benz, and wonders why it took the Swabians so long to create the GLA.

The arrival of the latest-generation A-class marked a radical departure from the automotive norm for the traditionally conservative Mercedes-Benz brand. And frankly, it was high time, with Audi’s A3 in particular showing off just how successful a premium compact can be.

Since the arrival of the A-class hatch last year, we’ve seen the same platform spawn the CLA coupé (effectively a four-door sedan with swoopier lines) and the car under scrutiny here, the GLA compact SUV.

Offered in both front wheel and all-wheel drive iterations, it competes head on against the likes of Audi’s Q3 and the BMW X1, in a segment that continues to attract new buyers. But does the Merc have what it takes to make its mark, despite its late arrival?

That depends on the individual expectation of what a premium compact SUV should deliver. In my book, the emphasis is probably less on gung-ho, mountain top-conquering all-terrain talent and more on a mix of style, versatility… and individuality.

The latter trait is sadly in short supply in a segment where a tall stance and a tailgate are defining characteristics. And ironically, it’s the one aspect of the GLA that really stands out.

Okay, so styling is a subjective issue, but for me, the GLA not only represents a different take on the compact SUV formula. It’s also visually the most convincing expression of the A-Class platform-based models.

The almost self-consciously bold grille and oversized Three-Pointed Star that looks so incongruous on the hatchback is much more convincingly contextualised here, adding real identity and aggression to its frontal expression.

What’s more, the GLA’s lines are cohesive and muscular, and despite its raised stance, it exudes an athletic, dynamic character. This is a distinctive vehicle that swaps the typically tall, estate-on-steroids look for a shape that neatly straddles hatchback and SUV form factors, extracting and fusing the best of both genres.

In short, you’d never mistake the GLA for anything else, with our without the Mercedes-Benz badge. There’s just enough brightwork to confirm the Merc’s upmarket heritage, but the big wheels, low-profile rubber and wide stance suggest that dynamic talent hasn’t been sacrificed for the sake of utility.

Indeed, a cabin that is pure A-class, and pure luxury, quickly allays any fears that the GLA’s focus would stray too far into pragmatic, functional territory.

The cabin is a feel-good place, with aero-style air vents, a fascia that sweeps boldly across the width of the car, and a nicely proportioned, widescreen colour screen that acts as the core interface between the GLA’s occupants and the car’s various features and systems.

The cabin is stylish without straying into garish, show-off territory. There’s more interior space than the exterior’s tautly structured lines suggest. And for those who place real importance on versatility, the split rear bench seat will fold flat to create a 1 235-litre cargo area.

But what about performance? Frankly, I expected to be underwhelmed by the GLA200 in that department, given that this most humble member of the five-model GLA line-up also has the smallest engine.

Even so, the 1,6-litre turbocharged unit isn’t short of enthusiasm, with a peppy maximum power output of 105 kW, and a very useful 250 Nm torque peak. It’s not the most refined unit, and despite decent low-down grunt, it actually enjoys being revved.

Of course, the combination of a turbo and a relatively small engine capacity isn’t unexpected – thanks to variable valve timing, direct fuel injection and a host of other efficiency-boosting measures, these small forced-induction engines link a reduced thirst for premium unleaded to more than ample zest.

That said, the GLA220’s power-to-weight ratio of about 75 kW/ton means this compact SUV is best described as swift, rather than sporty. The engine seems happiest in the band between 3,000 and 5,000 rpm, while the dual-clutch gearbox is quite content to operate in full auto mode.

However, it’s worth piloting the GLA in manual mode, using the shift paddles, and keeping the four-cylinder nicely on song. The result is a much more engaging driving experience. For those who like the stats, the quoted zero to 100 km/h sprint time is 8.9 seconds, with a top speed of 215 km/h – nothing earth shattering, but nippy enough.

Also of note here is that the GLA200 isn’t all-wheel driven, and relies solely on the front wheels for traction. The upside is a simpler, more efficient drivetrain. And as it turns out, it also makes for nimble road manners.

Even better, the GLA never feels tall or wobbly. In fact, you’d easily persuade blindfolded passengers that they were ensconced in something faster and wieldier.

Yes, the steering still suffers from numbness, but the chassis has a reassuring tautness that encourages enthusiastic cornering. And understeer is never obtrusive enough to get in the way of driver enjoyment.

Remember, this is not the AMG version, but the GLA200 isn’t scared to thread its way through some twists and turns, while proving just how composed and responsive the chassis is. While the chassis outclasses the engine, it also allows the GLA200 to be thrashed along quiet country lanes without straying too close to the vehicle’s ultimate capabilities.

It doesn’t feature all-wheel drive and is the better for it, while the dual-clutch gearbox is slick and quick. The fact that you have to drive it with some enthusiasm actually adds to its overall appeal. GLA vs. A-class? It’s the former that gets the real A on my scorecard! DM