Op-Ed: Are rhinos abandoned by all but South Africa? 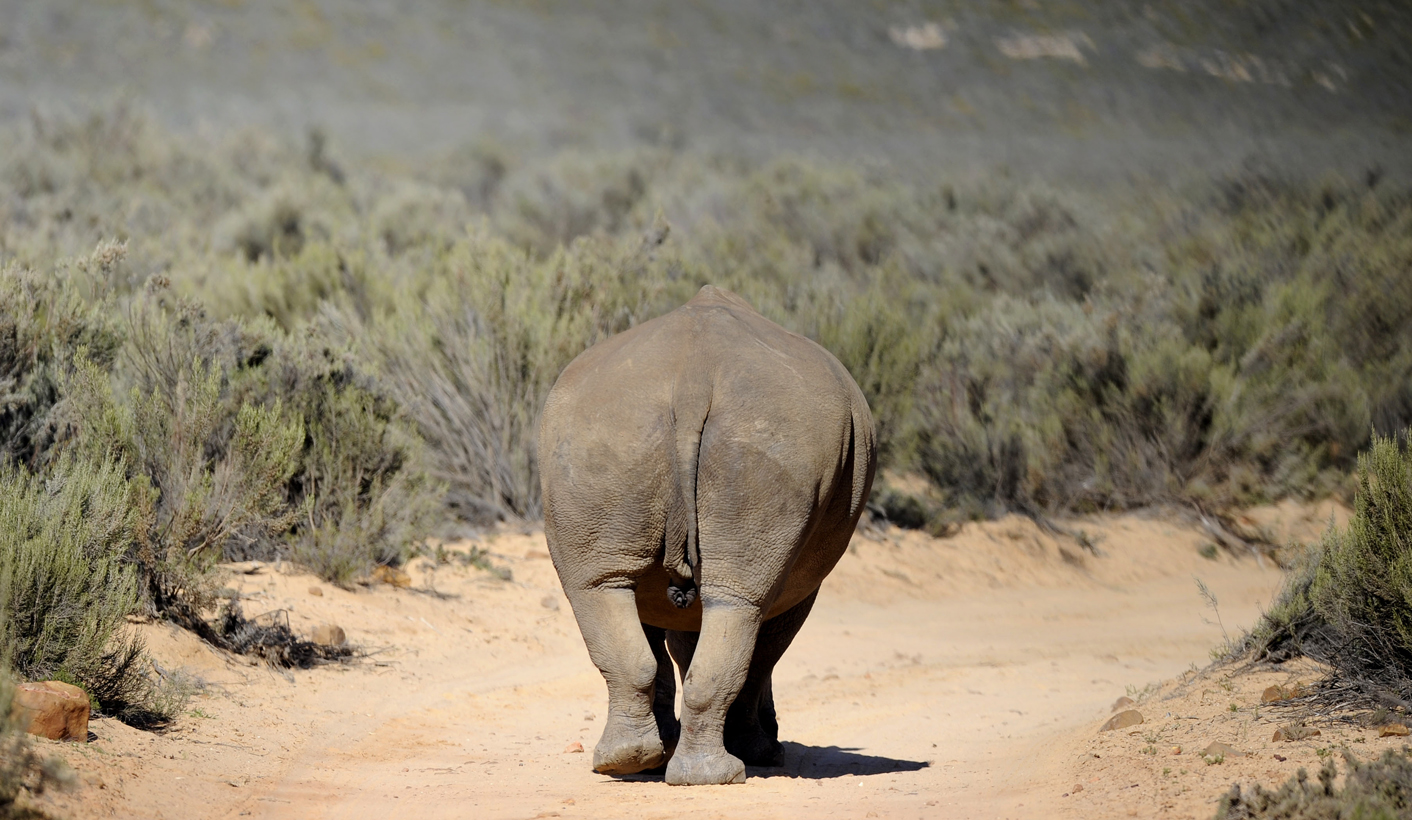 It looks like South Africa is going to break another record: 2014 is set to exceed 2013’s 1,004 rhino poached. But sadly, it’s not as though the nation is sitting back and doing nothing - far from it. And yet the scourge continues, thanks to a lone chink in the South African armour. By ADAM CRUSE.

From the groundswell of the nation’s citizens to the various multi-governmental agencies, South Africans are doing their level best to halt the rampage. Just last week in the Kruger Park, where most of the rhinos met their demise, 24 poachers were arrested and a number of others were shot in a joint operation with the SA Police and SANParks rangers. This brings the number of poachers apprehended in 2014 to over 120.

There is, however, a lone chink in the South African armour. Unfortunately, it’s a substantial chink – the penchant for the SA government to push for a legal trade is a misguided hope that it would torpedo the illegal trafficking of rhino horn. Such messages merely confuse consumers as to whether or not it’s morally right to buy the product.

And herein lies the rub. As long as there are consumers consuming, rhinos will continue to get slaughtered. Therefore it’s the world, not South Africa, where the solution to this horror truly lies.

This sentiment is echoed by the South African Minister of Environmental Affairs, Edna Molewa, who in an interview with VICE News stated that it was “important never to lose sight of the fact that there could be faster attainment results if we involve those Asian countries.”

John M. Sellar OBE FRGS, former Chief of Enforcement at the CITES Secretariat and currently a leading anti-smuggling, fraud and organised crime consultant (including for the UN Office on Drugs and Crime) also believes that the real fight lies outside South Africa. Sellar maintains, in an article posted on LinkedIn entitled ‘Is This Really the Best We Can Do?’ that “since the demand for the horns of these animals originates on another continent, the dedication, and often considerable courage, shown by South African park rangers, police, customs, military, prosecutors and other officials can only go so far.” In order to really tackle the problem, South Africans “need the support of their counterparts abroad.” Such support, unfortunately, has not exactly been forthcoming.

It all boils down to a lack of co-operation in dealing with a trade that is now regarded as one of the largest and most lucrative global crimes. But while Molewa et al are concentraing on the demand in China and Vietnam, and rightly so, it is also the trade in the West, particularly the USA, that is of grave concern. Smugglers bring horn and cargo in through poorly policed ports and take advantage of legal loopholes that exempt antiques and some hunting trophies from the ban on trading elephant ivory and rhino horn. Worse, when agents do manage to snare a wildlife smuggler, the courts are often lenient.

“Our nation hasn’t prioritised wildlife trafficking,” said David Hayes, a former Interior Department deputy secretary, who serves as vice chair of an advisory panel for wildlife trafficking formed by President Obama. A major part of the problem, Hayes said in an interview with the Washington Post, “is the lack of inspections at our ports.”

There are fewer than 330 inspectors and agents posted at strategic US ports of entry, something that hasn’t changed since agency’s law enforcement branch was formed 30 year ago. Since then, international wildlife trafficking has grown from almost nothing into a criminal colossus worth an estimated R200 billion per year, making it the fourth-largest­ global illegal market after drugs, weapons and human trafficking.

Rhino horn, much like ivory, cannot be imported into the US without a federal permit,  unless it’s an antique of 100 years or more old. However, there is a gaping loophole – hunting trophies. Although the US has recently banned the sale of elephant and rhino tropies from some countries, notably Zimbabwe and Tanzania, where it has deemed that the animals are unsustainable for sport-hunting purposes, it still allows the practice from others like South Africa, a nation that encourages hunting as a form of eco-tourism and conservation. The trophies – that are essentially tusks and horns – are strictly for personal use, but owners who tire of the trophies may put them up for sale to collectors at an auction. At $45,000 for just a pound of rhino horn, who wouldn’t tire of their trophy? As a result there is a burgeoning trade for these products at antique auctions right across America, with criminals clutching the usual fake documents weighing in heavily on the action.

While the Obama administration in 2013 belatedly issued an executive order to plug  such loopholes, it’s a case of too little, too late, and the willingness is not really evident with one official telling the Washington Post that they have a better job to do than chase after what is still perceived as cases with a low crime priority.

Sellar highlights such unwillingness in the events following the CITES Rhino Enforcement Task Force that met in Kenya in October 2013. During that meeting, which included representatives from 21 countries including the USA, China and Vietnam, it was recognised that organised crime networks, like the infamous Irish syndicate The Rathkeale Rovers, were operating in a wide range of countries from the UK to Australia.

The Rovers achieved notoriety for their snatch-and-grab thefts at museums and other nations, by yanking rhinoceros horn from exhibits, forcing museums across Europe to replace the exhibits with replicas.

All this is removed from the actual poaching taking place in South Africa. In fact, Sellar points out that many of poachers themselves come from beyond South Africa’s borders, mainly Mozambique, whilst citizens of the Czech Republic, Thailand and Vietnam have all participated in fraudulent hunting expeditions within the country.

This realisation led to an agreement at the Kenya meeting for the creation of a directory of the 21 nations present in order to facilitate rapid communication and enable law enforcement officials to realise, for example, that in one particular country the focal point might be in the police, whilst in another it might be in customs. The simple importance of such a directory, states Sellar, is “if the police in Johannesburg need to contact counterparts in, let’s say, Malaysia, we can probably be confident they will be able to find the right phone number or email address.”

In short, all the CITES Secretariat required was for each representative nation to provide information for a comprehensive list. Just a name, email address, phone and fax number of the department most likely to handle rhino-related crimes, whether it’s the CITES, environmental authority or the police, etc.

This is essentially something that takes less than a minute to compile, but each country  was given a little more time. They were allowed to submit details no later February 2014, a whole 3-4 months. By July, however, a reminder had to be issued by the Secretariat. Only in October was the directory finally published. It took a full year, or 1,000 dead rhinos.

But that’s not all…only nine nations were on the list (or eight since, as Sellar argues, South Africa doesn’t count). In other words, 14 countries failed to send their details; and before you correct my arithmetic, Sellar reveals that two of the nine were not even at the Rhino Task Force meeting. “Apparently [they] were interested enough to demonstrate their preparedness to assist, if need be. So stand up and take a bow, Greece and Japan!”

While China, the Czech Republic and Mozambique submitted their information [see list] there was nothing from the USA, Vietnam, Thailand or Malaysia, four of the biggest culprits in the illegal rhino horn trade. And while China and Mozambique have submitted theirs, it probably won’t be of much use to a South African investigator. Mozambique, for example, is notorious for non-compliance, especially if it involves CITES and, if anything, the nation’s officials are initimately linked to the crime syndicates they are supposed to be combatting. I sincerely doubt the name given for Mozambique in the directory carries much authority. A gmail account for such a position doesn’t give one much comfort that much will get done. It’s even more surprising that it was accepted by CITES at all.

What this tardiness and shocking lack of compliance reveals, in this most straighforward of operational tasks, is that the world doesn’t care a fig about rhinos. South Africa will remain fighting a losing and very lonely battle to save the species. As Sellar concludes about the world’s response: “In the race to catch up with criminals, our feet are not even on the starting blocks.” DM