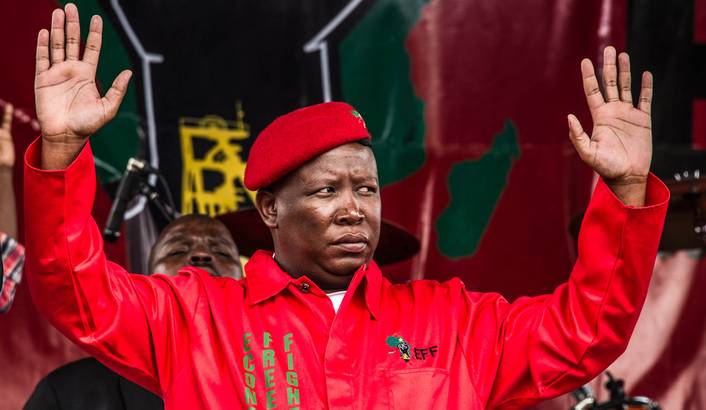 The Economic Freedom Fighters (EFF) will hold its first National People's Assembly in December under the banner “People's power for economic freedom”. In policy documents to be discussed, the party says the ANC is lost and disintegrating. GREG NICOLSON ponders five points the Fighters could look at.

The EFF’s policy discussion document reinforces its commitment to Marxist-Leninist-Fanonian principles, its own post-colonial bent on the militant fight against capitalism and imperialism. The organisation sees itself as underpinned by radical pan-nationalism in response to the ongoing inferiorities being ascribed to black people. According to the documents, the EFF has also managed to fuse together politics derived from the Freedom Charter as well as those from black consciousness, while taking positives out of the liberation movement and learning from the bad. No small feat.

Expect to see the red berets quoting Fanon in protests, sit-ins, picket lines and marches in the future as the organisation “must take part in and lead our own campaigns for radical change and social justice in real economic terms”. Interestingly, however, the party says a “great lesson” from the elections was that during the elections joining protests that the EFF didn’t start didn’t automatically translate into votes.

In its section “Towards Jobs for All” the EFF points to countries in East Asia that it says developed through redistribution of agricultural land, controlling the financial system, maintaining stability in areas affecting long-term investment, regulating foreign competition, promoting exports and building local technology capacity. The essential thing in South Africa, says the EFF, is for the state to control key sectors of the economy.

As a step towards boosting employment, the Constitution should be amended to include the right to work, says the EFF, while a moratorium should be imposed on retrenchments and farm evictions. In the meantime, the party would like 18-year-olds to be conscripted into national service and the Expanded Public Works Programme to be expanded. The EFF suggests the unemployed receive free transport, food security and free basic services while they look for work.

For the poor, by the poor

As an organisation claiming to represent the working class and poor, the EFF’s discussion document suggests the party’s elected leaders represent certain values. Leaders should be biased in favour of the poor and “in no way subscribe to feudal or primitive capitalistic tendencies including narrow nationalism and sexist chauvinism.” They shouldn’t hold shares or directorships in any private companies, should not receive more than one salary, and should not own houses that are rented out.

If capitalists get into the mix they’ll be disciplined, but it’s unclear just what will happen. “EFF will be firm in discipline and gentle in disbursing punishment that shall be proportional with the nature and severity of transgressions committed.”

Your land is my land

“Land return is essentially for the reparation of the haunted African soul and to create new social relations away from the current ones which are essentially racist and anti-black. Without land, there is no redressing the 350 years of dispossession and disfigurement of black life,” reads the EFF document.

The party says while the Constitution is unclear on whether it might allow land to be expropriated without compensation, the EFF doubts the courts would go against property holders. The document says there are three ways the land can be distributed: an overthrow of the landed gentry; the Venezuelan example; and people taking land through “unfavourable conditions such as a guerrilla war”. For now, it seems the EFF is happy to try its luck pushing expropriation in Parliament and lobbying through public demonstrations.

Responding to the question ‘What would happen to the land if expropriated?’ the EFF says, “LAND MUST BE RETURNED BECAUSE IT BELONGS TO BLACK PEOPLE! That’s the first principle. What we would do with the land is none of the business of the land thieves. We want back because it’s ours! That there shall be a new efficient black farming class and that land shall be used productively is secondary question. We want it back even if it’s to look at it every morning and cry out loud IZWE LETHU!”

Those calling for the likes of Oscar Pistorius to rot in prison for life may not like it, but the EFF advocates progressive action to improve the state of jails. To prevent situations where people can’t afford bail and have to wait in jail, the EFF wants the bail system abolished and all accused to await trial at home or in a safe place. It also suggests we have both closed and open prisons.

“Closed prisons will operate on lockdown principles, but still maintain the right to work, rehabilitation and personal development; while the open prison operates on commune-style sharing of own bedrooms and communal kitchen, living room and ablutions. Prisoners will share communes of six.” Open prisons would see inmates receiving the right to work, meet family privately, prepare meals and pay for their accomodation. The EFF also wants the criminal records of prisoners deemed rehabilitated to be cleared. DM