Senzo Meyiwa: A senseless loss, a cry for action

Senzo Meyiwa: A senseless loss, a cry for action 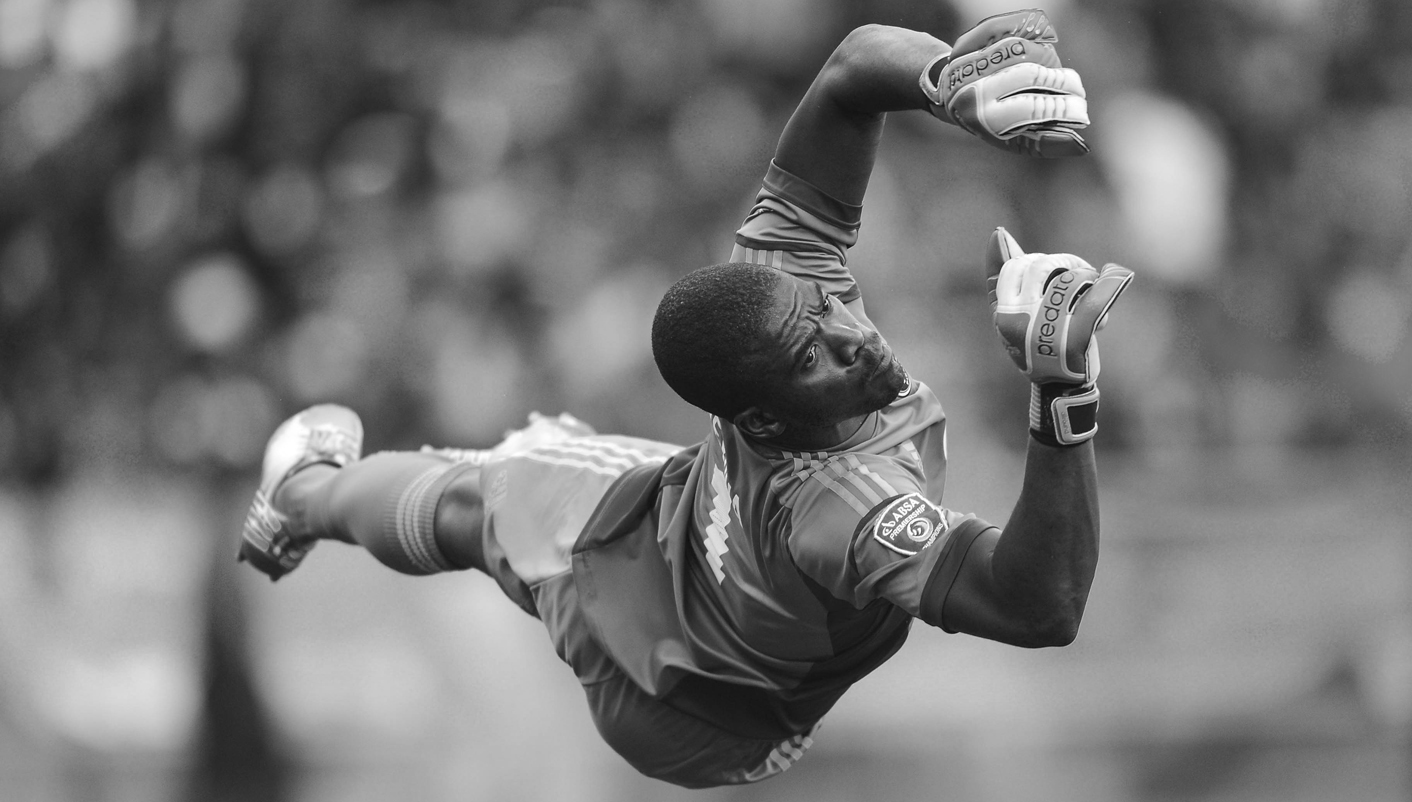 Soccer star Senzo Meyiwa was killed in Vosloorus six years ago. (Photo: EPA / Barry Aldworth) epa04465700 A picture made available on 27 October 2014 shows South Africa soccer team captain, Senzo Meyiwa during a club soccer match, in Johannesburg, South Africa, 09 March 2013. The 27-year-old Bafana Bafana and Orlando Pirates goalkeeper was shot dead on 26 October evening at his girlfriend's house in Vosloorus south of Johannesburg. Two suspects went inside while a third stayed outside, according to police. Meyiwa was shot at, while none of the other six people inside the house were injured. The suspects fled on foot. EPA/Barry Aldworth EDITORIAL USE ONLY EDITORIAL USE ONLY

Senzo Meyiwa was going to be one of Africa’s best goalkeepers. On Sunday night, another young South African life was ended. Crime continues to haunt the country and continues to throw it into the international spotlight for all the wrong reasons. By ANTOINETTE MULLER.

Another day, another senseless killing in South Africa. This time, it was somebody almost everyone knew: Senzo Meyiwa, South Africa’s number one, the country’s safe pair of hands. Meyiwa was shot on Sunday night in an incident which police are treating as a robbery and murder.

At 27 years old, Meyiwa was in the prime of his career. He was boisterous, enchanting and his laughter was infectious. He’d worked his way out of a football rut to become one of Africa’s brightest goalkeeping prospects. South Africa – and the world – lost one of the most hardworking and patient sportsmen of the current era.

In a statement, the South African Police Service said two men had entered the house where Meyiwa was staying in Vosloorus, around 20:00 (18:00 GMT), demanding mobiles phones and valuables. A third man remained outside. All three fled on foot after shots were fired. Meyiwa was taken to hospital and declared dead on arrival.

Exact details remain sketchy at this point, with some reports suggesting Meyiwa took a bullet to protect Kelly Khumalo, his girlfriend. Those reports have, however, been denied by the South African Police Services, who have also stated there is no evidence that it was a so-called contract job.

“The deceased, when he was shot, had moved towards the door when the shot was fired,” Gauteng detective unit head Major-General Norman Taioe told reporters in Johannesburg.

“He was not protecting any specific person at that moment. Another person was struggling with the attacker at the door. Senzo and his friends were leaving the house when the two [attackers] entered the house. One of the attackers bumped into the first friend and a scuffle ensued.

“We do not have evidence which suggests that this was a contract killing or a hit on Mr Meyiwa. There was no gun aimed specifically at him.”

Police have vowed to track down the suspects, but the incident has thrown South Africa’s crime into the international spotlight. Newspapers and agencies across the world beamed the story across continents, and the image that’s being painted of South Africa is not the one you see on picturesque postcards. While most ordinary South Africans are aware of just how bad crime is and can be, too much of it is ignored.

Vosloorus, with a population of just over 160,000, has a high crime rate. In 2013 there were 50 murders, with attempted murder sitting at 31. Assault with the intent to inflict grievous bodily harm had 342 cases in 2013 and both common robbery and robbery with aggravating circumstances had reported cases of 377 on 2013. Those numbers paint a fairly grim picture of just how bad crime is in many areas of the country. The national murder rate sits at close to 50 per day with house robberies sitting at the same rate.

Some reports have suggested that this was a bit more than an ordinary robbery, but that does not change the fact that life is far too cheap in South Africa and the rate at which people are killed, far outweighs the rate at which criminals are prosecuted.

There will be much outrage over Meyiwa’s death and rightly so. It’s not because his life is more important than the thousands of others who are murdered in the country every year, but because he represents every ordinary South African. Meyiwa could have been you. He could been your brother, your father, your friend. He was somebody’s brother, somebody’s friend, somebody’s father and somebody’s lover. Whatever the circumstances he died under turns out to be, he still died a senseless and completely unnecessary death, a fate far too many other people have suffered in the country.

South Africa cannot continue to try to brush its crime issues under the carpet. It’s time that politicians take responsibility for citizens and start taking proactive action to remedy the constant and senseless killing of the country’s own people.

Government also has to take responsibility for the picture that’s being painted of South Africa. From Anni Dewani’s contract killing to Oscar Pistorius’ trigger-happy hands and now Meyiwa’s killing, from the outside looking in, the picture ain’t pretty. It is easy to dismiss the reporting of crime stats as fearmongering from the outside, but even South Africa’s best spin doctors will be hard press to find the yarn thick and long enough to cover the avalanche of high profile cases. It increasingly seems as if though there is no fear of the law from criminals. For all the good that has come out of South Africa and continues to happen here, it keeps on being cast into the limelight for all the wrong reasons.

This anger and grief will resonate with South Africans, not because Meyiwa is not more important than anybody else who has been killed or will be killed, but because this has an immediate and collective impact on the nation’s psyche. While crime impacts individuals all the time, Meyiwa was a family member to each and every sport-loving South African. Now he is a statistic, like each and every other South African.

The shooting also highlights South Africa’s issue with guns. While firearm licences are required, this case shows that weapons and their deadly ammunition are far too easily accessible, both legally and otherwise. Some feel the need to keep guns for their own protection from others who keep guns for more illicit purposes.

It was the second sporting death in two days, with former 800m world champion runner Mbulaeni Mulaudzi dying in a car crash on Friday. He was his way to an athletics meeting when he crashed and became another statistic. Road accidents claim a huge number of lives in the country, with poor roads and reckless driving all being responsible for deaths. While many awareness campaigns have been run over the last few years, there has been little change, and South Africa has one of the highest road fatalities per 100,000 people per year.

Two of the biggest problems in South African society have robbed us of two of our most prized sporting talents. If that doesn’t spur the powers that be into some sort of action, nothing will. DM

Photo: A picture made available on 27 October 2014 shows South Africa soccer team captain, Senzo Meyiwa during a club soccer match, in Johannesburg, South Africa, 09 March 2013. The 27-year-old Bafana Bafana and Orlando Pirates goalkeeper was shot dead on 26 October evening at his girlfriend’s house in Vosloorus south of Johannesburg. Two suspects went inside while a third stayed outside, according to police. EPA/Barry Aldworth