The killing of Anni: A view of South African courts, 25...

The killing of Anni: A view of South African courts, 25 years later 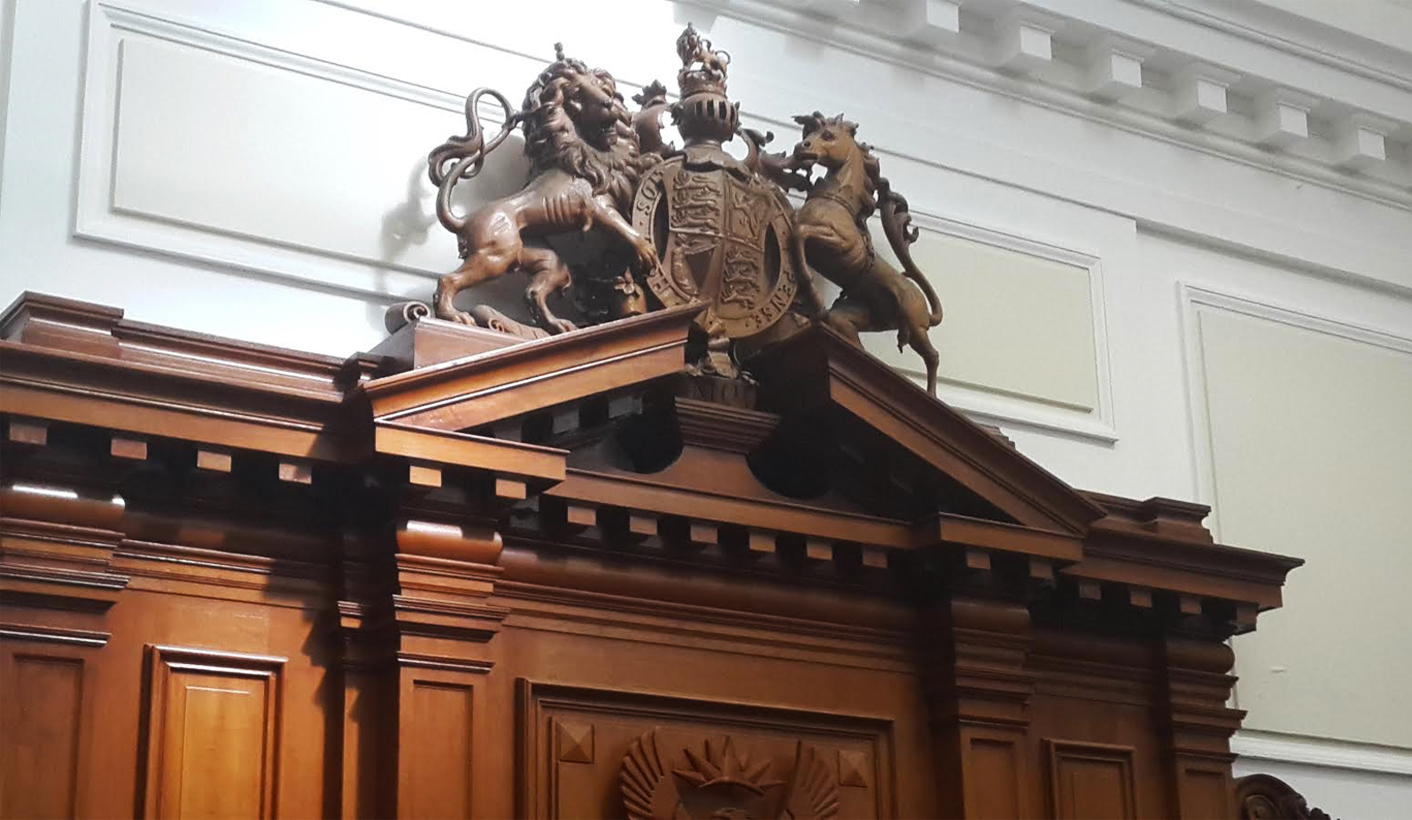 While a few physical manifestations of the past discreetly keep watch over proceedings at the Dewani murder trial, inside Court 2 at the Cape High Court, from the judge to her assessors, the diversity of the South African media on the press bench to the demeanour of the security and court staff and even their manner of dress, there is thrilling evidence of a society transformed. By MARIANNE THAMM.

There was time when all professional journalists were required to begin their careers in the country’s courts. Apart from providing a wealth of stories that reflected the more sensational aspects of society, court duty teaches journalists patience, accuracy, how to procure documents and, more importantly, the powers of acute observation required for a more long-term survival in the job.

Usually ‘cubs’, as young reporters were then categorised, would have to ‘do time’ in the scruffy lower courts with their petty crimes before graduating to regional and then finally what was then known as the ‘supreme’ court.

There is a large heraldic carving of a lion and a unicorn, the Royal Coat of Arms of Great Britain and Northern Ireland, perched atop of the wood paneling behind Western Cape Deputy Judge President Jeanette Traverso’s bench where she sits with her assessors, advocates Penny Magona and Johan Gerber while hearing the Dewani matter. Positioned beneath the lion is a more recent carving of the new South African coat of arms – those two cute, little happy people who look like they’re clinking a glass of champagne (well at least that’s how I see them).

But none of that matters now. The courtroom in the 21st Century in a democratic South Africa is completely transformed. The last time I was required to report from these spaces was in the 1980s in Apartheid South Africa where the law was a blunt instrument wielded entirely by white men in a courtroom populated by white male policemen doing the bidding of white male politicians. It was a hostile space for the media where court orderlies routinely denied journalists access to charge sheets or other relevant documents. It was a space where those who were accused were overwhelmingly black and charged for violating the hundreds of apartheid laws that attempted to regulate and regiment ordinary life.

Anyone who found themselves in the dock was addressed – or rather, barked at – as if they had already been found guilty. While interpreters were used for those who spoke little or no English, the notion of human rights or constitutional protections was non-existent.

As journalists reporting from this frontline we witnessed, at first hand, the utter brutality of the system.

For months we would watch as woman after woman, usually with a baby on her back, would be brought up from the cells below, before being charged and fined for being in Cape Town illegally. All of these women had violated ‘influx control’ laws and had come to the city from the Eastern Cape to be with their husbands in Cape Town. These wives and mothers were relentlessly hounded, arrested, harassed and criminalised. They were routinely brought to court on a daily basis – many could not afford the ‘fines’ and were simply kept in jail to be later placed on buses and trucks and sent back to the then Transkei.

In writing about this the media hoped to consistently expose the sheer madness of the system.

There were many political trials in the 1980s, most of them held in the country’s supreme courts. In March 1981, trade unionist Oscar Mpetha was convicted in the Cape Town Supreme Court of “terrorism” and sentenced to five years after a three-year trial. He was only released in October 1989.

Gay men were routinely arrested after being trapped by policemen in the vice squad who would pose as male prostitutes. I recall one morning when the familiar face of a friend popped up from the cells below the Cape Town magistrate’s courts. He had been arrested for ‘loitering’ in Sea Point, which was, and still is, a popular meeting point for gay men. Gay and lesbian clubs, which were surprisingly non-racial in the 1980s, were routinely raided and those inside arrested and hauled off in the back of police vans, their blue lights flashing and sirens wailing.

My friend, a gentle, professional man, was clearly utterly humiliated as the magistrate denied him bail. He [my friend] desperately appealed to me as I sat in the press bench to help bail him out, which I did. Eventually he was acquitted of solicitation but only after paying for an advocate to prove that the policeman had done the soliciting and not my friend. But not every gay man could afford legal representation and many were held illegally for weeks.

And almost every single black person arrested for ‘violating’ the myriad laws of the land could not afford to pay bail or for legal representation. Life in that country for the majority was nasty and brutal and the state and the courts colluded seamlessly to enforce the state ideology of the time.

Scholar and author Padraig O’Malley writes, “law societies and bar councils, which are supposed to be the watchdogs of law and legal standards, struck from the roll anti-apartheid activists convicted of crimes against the apartheid state, including Bram Fischer, Ntobeko Maqubela, Kader Hassim, MD Naidoo and Rowley Arenstein. In the 1980s, in particular, innocent people were charged with ‘public violence’, when in fact the violence arose from the police and not the public (as in the infamous Trojan Horse case in Cape Town)”.

The bricks, mortar and wood of what is now been renamed the Cape High Court have stood as mute testimony to this shameful and brutal past and it is, for this reporter at least, a particular thrill to find myself in the same building all these years later and to find its heart and soul and its physical contours utterly changed and transformed.

The diversity of the media bench, the sense of ease and confidence with which everyone who works in the building goes about their work, the manner in which an accused person is advised of his or her human rights feels at times miraculous.

An editorial in The Guardian earlier this week after the Oscar Pistorius sentencing suggested that the trial had been a “seminal” one in “a country where major democratic and social transformations remain unfinished”.

Twenty years after democracy, opined The Guardian, the Pistorius hearing has been “something of a mirror held up to the new South Africa”.

“There was no more striking illustration of this than the central figure of the judge, Thokozile Masipa, a black woman who presided over two Afrikaner colleagues. Judge Masipa has been a vivid symbol. Imprisoned during the struggle against apartheid, in 1998 she was only the second black woman to become a judge in South Africa. One of her final comments on Tuesday carried a message of reconciliation and mercy that may have deliberately echoed something of Mandela’s philosophy: ‘Righteous anger,’ she said, ‘should not cloud judgment.’

“South Africa still battles with issues of race, social inequality and difficult governance, but the spirit of seeking ‘mercy’ and ‘achieving the right balance’, as expressed by Judge Masipa, is also testimony to the admirable path that the country has nevertheless travelled over the past two decades. The Pistorius trial has demonstrated this in a striking way. South Africa emerges from it with much credit.”

The Shrien Dewani trial offers us a similar mirror. The ruling that the accused’s sexual orientation is of no consequence and does not prove motive was one that baffled many international journalists yet South Africans in the court immediately understood the decision.

While justice may still be elusive for those who are poor and who cannot afford expensive legal teams, the fact is that justice is, at least theoretically, a notion that is possible. The law is as imperfect as society itself but South Africa and our legal system – with all its challenges and flaws – can stand proud in the international spotlight. DM

Photo: A large heraldic carving of a lion and a unicorn, the Royal Coat of Arms of Great Britain and Northern Ireland, perched atop of the wood paneling behind Western Cape Deputy Judge President Jeanette Traverso’s bench. (Marianne Thamm)