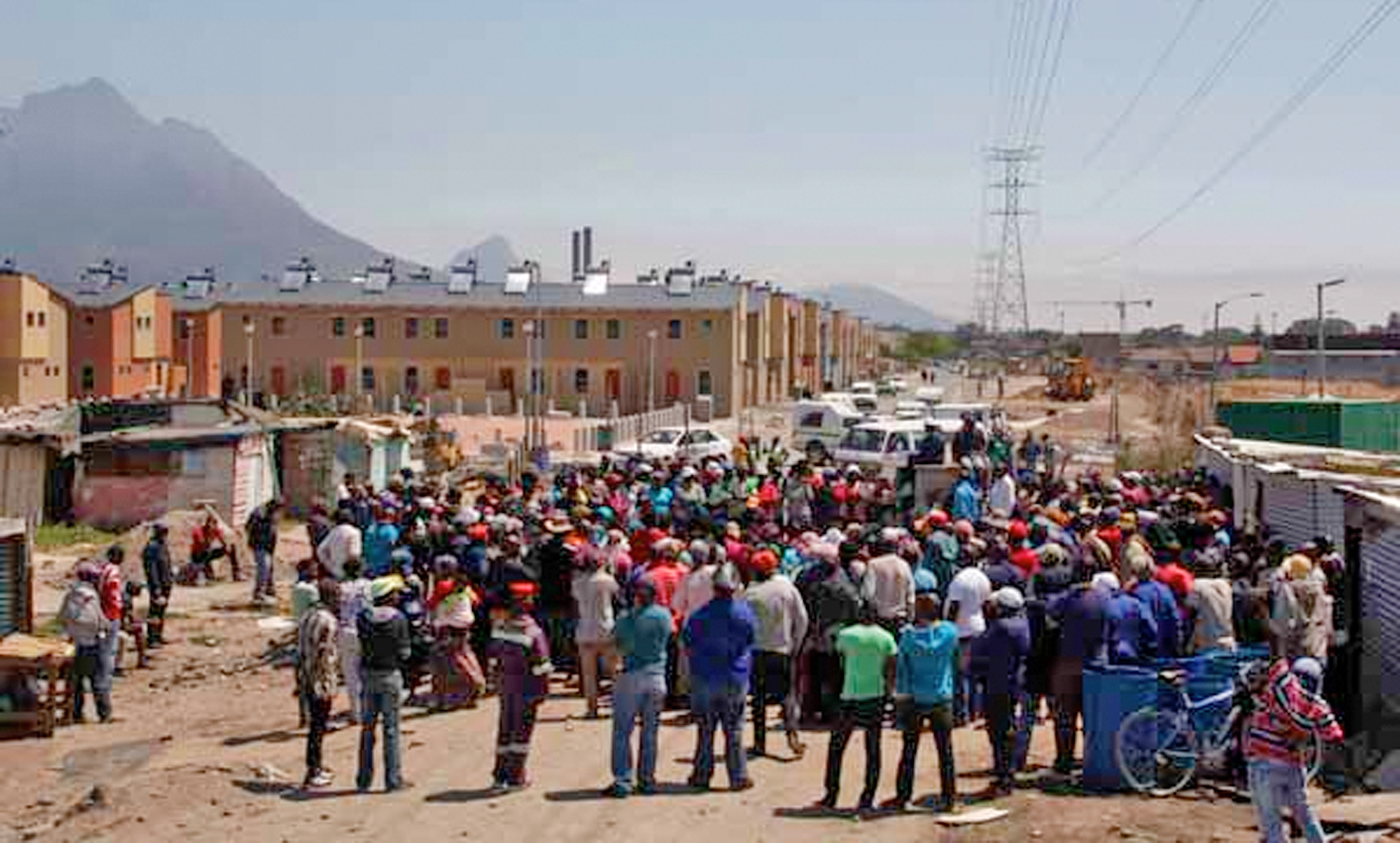 Residents of Joe Slovo informal settlement, Langa, have been left homeless after they started demolishing their shacks under the impression that keys to new housing units would be handed over to them. The MEC for Human Settlements, Bonginkosi Madikizela, has said that the shack demolitions were premature and that many of the beneficiaries are “too young” to be prioritised for housing. By Daneel Knoetze for GROUND UP.

On Wednesday, when community leaders told Ntombi Mpozolo, 26, and dozens of her neighbours to move out of their shacks in anticipation of receiving new houses, they were happy to oblige. Mpozolo’s section of Langa’s Joe Slovo informal settlement borders the newly completed Phase 3 of the N2 Gateway Housing Development. She and 55 neighbouring households claim that they have been registered as beneficiaries in line for new houses at the development since 2010. Title deeds for the units have already been signed, she says.

“We have been waiting for those houses a long time. Our ID numbers are all on the list and we were not expecting to be so disappointed. Instead of sleeping in our new houses, we were left outside to sleep among our possessions.”

Mpozolo showed GroundUp to the hearth around which some of the families slept the night before. The coals were still smouldering, which would make it easier to light the fire later, she said. Couches, fridges, kitchen cabinets, luggage, clothing and remnants of shacks lay scattered about.

Nearby, Mzwanele Zulu, of the Joe Slovo Task Team, had convened an impromptu community meeting. He used a loud hailer to address some 200 people who had gathered.

The Task Team is the community’s liaison to government and the N2 Gateway project managers – the Housing Development Agency.

“There is a lot of sudden confusion on our side and, more so, from the community,” he told GroundUp after the meeting.

“We are just here to show that we are in solidarity with them. Last night I was here until 2am, sitting with people who had no option but to sleep outside – mothers and infant children.”

Zulu said the Task Team, on instruction from the HDA, told 56 families to move out and to start demolishing their shacks.

“We had a fruitful meeting with the HDA last week and it was agreed that the beneficiaries would move in on Tuesday and Wednesday. Now, suddenly, we are told that these beneficiaries are too young and that they will not receive houses at all. That has come completely out of the blue. The community feels that they have been stabbed in the back. It may seem peaceful now, but this is a recipe for violence.”

The issue of age and housing allocation was addressed by national Minister of Human Settlements, Lindiwe Sisulu, at the 6th Planning Africa Conference in Durban on Tuesday. According to Sapa, Sisulu told reporters that people below the age of 40 are not “a priority” for government housing allocation.

“Our intention in giving free houses was to right the wrongs of the past and make sure that we can give our people dignity. And that group of people is not the people below the age of 40,” she is reported to have said.

“I don’t know of a country that gives free houses to young people. Free housing in a few years will be something of the past. You (the young people) have lost nothing (to apartheid).”

The HDA could not confirm reports that the issue of age came up in their discussions with the Joe Slovo Task Team this week. Spokeswoman Kate Shand said that the HDA would only be able to respond to GroundUp’s queries later this week.

Madikizela of the Western Cape Human Settlements department, which is a partner in the N2 Gateway project, acknowledged that expectations had been raised in the Joe Slovo community that keys would be handed over this week.

“But, at no stage were those residents told to move their possessions or to demolish their shacks,” he said.

“The development’s contractor is the only body tasked with doing this. If they do not give the instruction, which they did not do, it would be irresponsible to start the process of moving.”

On the issue of age, Madikizela said:

“There is no way that we are giving houses to kids in their 20s. It cannot be fair that youngsters – who are new on the waiting list – get houses when there are people in their 60s and 70s who have lived in shacks for decades. They may threaten violence, but government will not bow to this pressure.”

But Mpozolo, a mother with a four year old boy, said that she was merely asking for government to make good on previous agreements that she and 55 of her neighbours would move into the new houses.

If they were not handed the keys to the new houses, Mpozolo said, the community would violently resist relocation.

“We are old enough to vote for these politicians to be in power, but now all of a sudden we are not old enough to be given the houses that we were promised.”

“They themselves agree that we have been on the housing waiting list. We qualify for these houses, they are ours. This is unfair and, as you can see, we must now live outside without a roof over our heads.” DM

Photo: A meeting of angry residents from Joe Slovo, Langa took place next to the newly completed Phase 3 of the N2 Gateway housing development on Wednesday. Photo by Daneel Knoetze.