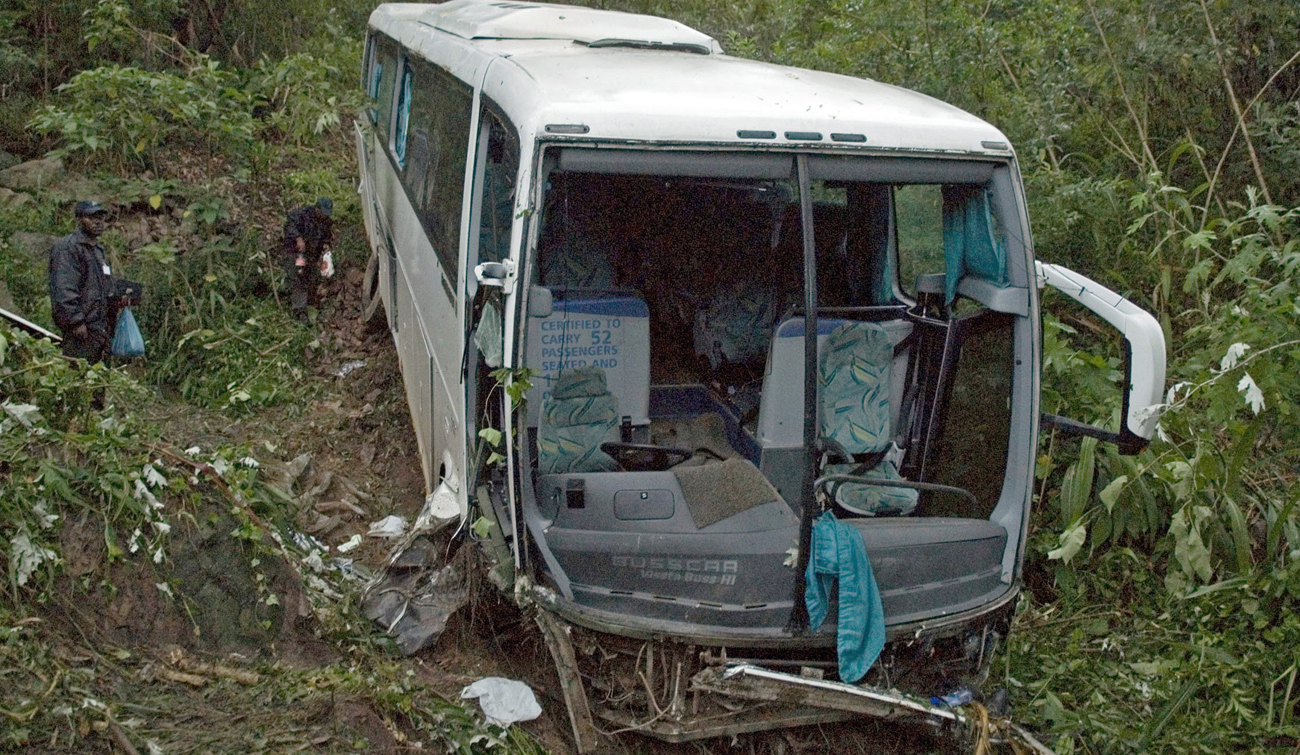 In South Africa at least 5,000 people are killed on the country’s roads every year. Or is it close to 14,000? Or more than those dying of HIV/AIDS and tuberculosis, as has been claimed? Researched by Sintha Chiumia for AFRICA CHECK.

Crosses from wood. Markers from stone. Some decorated with plastic flowers, others displaying photographs of the dead.

Roadside memorials marking the locations of fatal traffic accidents have become a common sight in South Africa, as in other parts of the world.

Suppose a roadside memorial was to be erected for all South African crash victims in a given year, would their number exceed deaths due to tuberculosis and HIV/AIDS?

Yes – according to a press release issued after a recent meeting of parliament’s portfolio committee on transport. It stated: “Carnage on the roads causes more deaths in South Africa than HIV and TB.”

How true is the claim?

According to Stats SA’s 2012 Mortality and Causes of Death report, released last month,  TB was the leading killer in South Africa, accounting for around 9.9% of all deaths in that year.

Obtaining accurate data on HIV/AIDS deaths is trickier. The Mortality and Causes of Death report suggests that HIV/AIDS accounted for just 3.9% deaths (18,663) in 2012.

But HIV/AIDS deaths are said to be ten times higher than those recorded on death certificates and do, for instance, account for many deaths ascribed to diseases like TB. According to Ria Laubscher, a senior scientist at the Medical Research Council’s Burden of Disease Research Unit: “It is important to note that a large number of HIV deaths have been misattributed to immediate causes of death such as tuberculosis, diarrhoeal diseases and lower respiratory infections.”

“In particular we use the HIV prevalence rates coming from the ante-natal clinics and then we also use the information coming from department of health related to antiretroviral treatment for adults and children separately,” Iturralde said. “This is compared to other causes of death [as reported in the Mortality and Causes of Death report] that are HIV-related but coded as something else in order to convince ourselves that the numbers are correct.”

By following this process, Stats SA estimated that in reality 203,293 deaths could be attributed to HIV/AIDS in 2012.

Were more people dying on our roads? Not nearly, it would seem. The corresponding figure in the 2012 Mortality and Causes of Death report is almost forty times lower than the AIDS death estimate:

Confusingly though, the number of deaths reported by the Road Traffic Management Corporation (RTMC) differs. The RTMC is a government agency responsible for compiling and analysing accident and traffic data and gain their information from accident reports by South African Police Service (SAPS).

A senior manager for road traffic information at the RMTC, Magadi Gainewe, provided figures for up to 2011, but said data for 2012 “has not been approved” yet and could not be released.

How do we then know what the road death toll really is?

While deaths are fairly accurately recorded they are often poorly categorised and this impacts on the Mortality and Causes of Death report, Richard Matzopoulos – a specialist scientist at the MRC’s Burden of Disease Research Unit – told Africa Check.

“Even though reporting of total injury deaths is fairly complete, the [death certificates] have poor coding of injury deaths, that is, a poor distinction between road accidents, other unintentional causes, homicide, etcetera,” he said.

On the other hand, the accuracy of RTMC statistics is affected by underreporting. “This forces them to estimate by applying an adjustment factor to take into account the unreported deaths, which are disproportionately pedestrian deaths,” Matzopoulos said.

Previously, a death was recorded as a road fatality in South Africa when a person died within seven days of the accident. This changed last year when the RTMC adopted the international standard of counting all deaths that occur within 30 days, the corporation’s Gainewe said.

Still, the RTMC is dependent on the police to follow-up with hospitals on whether a badly injured crash victim has died, a practice that has been described as “problematic”.

Given the way RTMC data is adjusted to provide for underreporting, Matzopoulos estimates it could be 20% higher – therefore in the region of 16,700 road deaths for 2011.

He attributed inaccuracies to different reporting systems used by South Africa’s provinces and said that the RTMC plans to create a national standardised system as well as appoint accident information officers at all key police stations. He said the RTMC would also work closely with the Departments of Health and Home Affairs, the Council for Scientific and Industrial Research (CSIR), the MRC, and SAPS to improve data accuracy.

But personnel we spoke to at the MRC were not yet aware of this. We made various attempts over the course of ten days to contact Msibi. He did not return calls or text messages.

When the MRC train forensic pathologists to categorise deaths correctly, road fatality statistics can improve immensely. This has been the case in the Western Cape province, Matzopoulos said. There raw data is collected on a daily basis and is available online.

“The data informs all interventions [to reduce road deaths],” said a spokesman for the provincial Transport minister, Siphesihle Dube. Statistics showed that on average 6.2 people are killed per day over payday weekends – ascribed to people having money to buy alcohol and travel – up from 3.6 people, allowing them to at least warn motorist to be vigilant.

Conclusion: The claim is false

Road accident deaths in South Africa are far lower than those that can be attributed to HIV/AIDS and tuberculosis.

But we cannot say for sure how much lower. The number of road deaths reported by the Road Traffic Management Corporation (RTMC) is almost three times higher than that contained in StatsSA’s mortality report. The data that is collected is also detrimentally affected by underreporting.

South Africa has adopted a UN resolution to reduce traffic fatalities by half at the end of the decade. In order to achieve this, the RMTC must implement their planned improvement of traffic fatality statistics as a matter of urgency.

To tackle a problem you need to be able to quantify and understand it. Accurate data forms an integral part of infrastructure and enforcement planning and policy implementation.  Marius Luyt, a spokesman for the Automobile Association (AA), summed it up: “If you know 500 pedestrians were killed on a specific stretch of road, you could put up a bridge there.” DM

Photo: The wreckage of a bus carrying Japanese tourists to Durban after a trip to the Drakensberg Mountains is seen after an accident in Westville February 8, 2008. The bus veered off the freeway, crossed the oncoming traffic lanes and then left the road about 30km (18 miles) before Durban. REUTERS/Rogan Ward (SOUTH AFRICA)