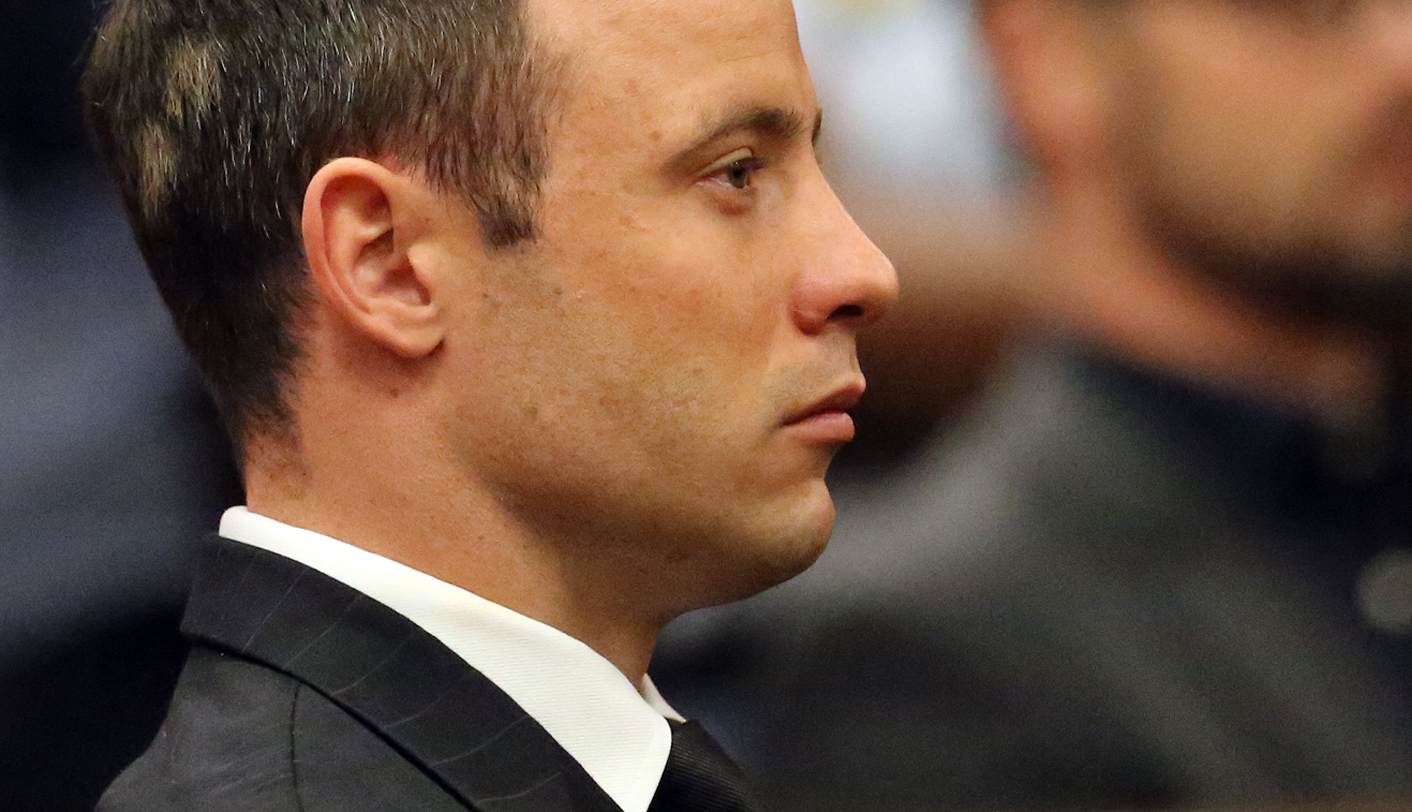 Oscar Pistorius was sentenced on Tuesday in the North Gauteng High Court after being found guilty of culpable homicide for the killing of Reeva Steenkamp. Judge Thokozile Masipa sentenced him to five years in prison. GREG NICOLSON was there.

The world’s press is back. Journalists take selfies outside the court. Photographers and cameramen line the entrance on cascading shelves of ladders. Even the public’s returned, crowding around Golden Miles Bhundu as presenters circle him previewing the day.

“Oscar Pistorius will finally hear his fate today. Will he go to jail or be sentenced to home arrest?”

Extra marshals and police are on hand and start turning the public away.

“This is crazy,” I say to Gina Myers as we wait in the throng outside the courtroom.

Pistorius enters court and talks to his lawyer Brian Webber. Henke approaches. Father and son embrace over four white roses that rest on the edge of the dock. Oscar received them from a fan.

Masipa enters. The gallery falls silent. Pistorius is guilty of culpable homicide and contravening the firearms act. Sentencing is Masipa’s responsibility alone and she has considered the nature and the seriousness of the offences, the circumstances of the accused and interests of society. Opening statement: sentencing is an imprecise procedure.

Masipa starts with the evidence in mitigation of sentence. On Dr Lore Hartzenburg’s evidence in mitigation Masipa cites the post-traumatic stress disorder, depression and what Pistorius has lost: his career, love and reputation. Joel Maringa from the Department of Correctional Services suggested Pistorius should be sentenced to house arrest, 16 hours weekly community service and obliged to attend various programmes. “In the process of compensating for the wrong done he will get an opportunity to restructure and modify his offending behaviour within the community context where there are sufficient resources to produce the expected outcome,” Maringa told the court. Pistorius’s manager Peet van Zyl cited the athlete’s charity work and lost endorsements. Annette Vergeer, a social worker, said prisons aren’t equipped to adequately cater for Pistorius’s disabilities.

Masipa turns the page and looks at Pistorius’s personal circumstances. He is unemployed, has no income, no previous convictions, lives with his uncle Arnold and has faced challenges living with a disability. She elaborates on how hard it is for Pistorius to walk on his stumps. Defence Advocate Barry Roux said as such the sentence should be non-custodial, three years of house arrest.

Masipa weighs up the witnesses. “I was not impressed by Mrs Vergeer as a witness,” she says, while taking note of Maringa’s testimony. She describes Vergeer as “unhelpful” and “quite disturbing”. Modise meanwhile “impressed me”. She does not hesitate to accept his “evidence is true and reliable”. “The Department of Correctional Services has made strides and is moving with the times,” says Masipa. “If the accused in this matter would be given a custodial sentence it would not be the first time that the department would be confronted with an inmate with disabilities,” she adds, swinging the sentence in the state’s favour. “I am satisfied that the Correctional Services Department is equipped to deal with inmates with special needs.”

Pistorius does not react. The Steenkamps continue to stare at the judge.

Modise’s testimony is crucial in light of Vergeer’s capitulation. Masipa says she is satisfied Pistorius can get the appropriate physical and psychological treatment in prison and won’t have to terminate his relationship with his own doctors. “I have no reason to believe therefore that the accused would present the Department of Correctional Services with an insurmountable challenge.”

The judgment appears well-considered and cites multiple other cases. Masipa offers soundbites, but gives little away. “It would be a sad day for this country if an impression was created that there is one law for the poor and disadvantaged and another for the rich and famous,” she says, once again turning the tide against Pistorius. She says she had a “a feeling of unease on my part as I listen to one witness after another placing what I thought was undue emphasis on the accused’s vulnerability.” This was the man who competed against able-bodied athletes.

But Pistorius’s impact on others through charity work “cannot be ignored”, yet needs to be seen in perspective – he’s a sportsman and needs to do such.

On the seriousness of the charges, Masipa says Pistorius, who knew how to handle a gun, knew the toilet was small, fired four shots and there was no room for escape. “In my view that is very aggravating.”

Rushing through the judgment, she continues. Masipa accepts Pistorius’s shows of remorse, his depression, and that the media can affect Pistorius’s reputation and career prospects.

The interests of society are that crimes be punished severely in deserving cases but “society cannot always get what they want as courts do not exist to win popularity contests but exist solely to dispense justice,” says Masipa. Courts can’t act on a demand for vengeance and have moved away from an “eye for an eye” approach. It isn’t wrong however that indignation should receive some recognition.

“The loss of life cannot be reversed. Nothing I do or say today can reverse what happened on February 14… Hopefully this judgment on sentence can provide some closure to the family and those concerned so they can move on with their lives.”

Finally, Masipa begins her conclusion. The gallery is on edge, not sure which way the sentence will swing. A sentence which overemphasises one element cannot be balanced, she says, and courts need to be merciful, but a loss of an innocent life is always serious. The judge cites a number of other.

“I’m of the view that a non-custodial sentence would send the wrong message to the community. On the other hand a long sentence would not be appropriate as it would lack the element of mercy.”

Pistorius is escorted downstairs into the cells. The Pistorius family stand stunned, whispering among themselves. The Steenkamps stand still.

Leaving court, Pistorius’s father looked distraught and would not talk to journalists. Barry and June Steenkamp said they were satisfied with the sentence but will never find closure: Reeva is gone.

The Oscar Pistorius Trial is over. DM