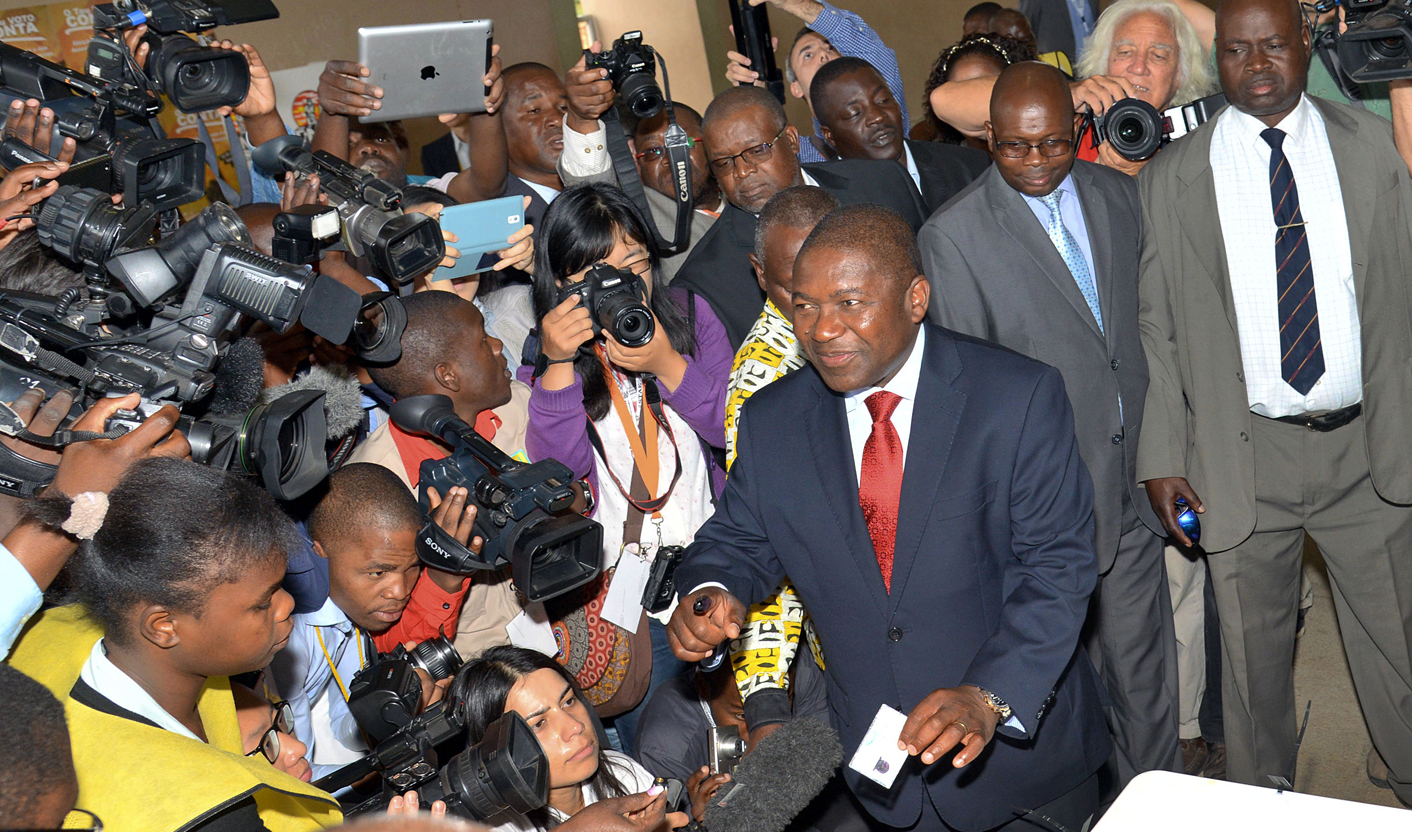 Although final results are still to be released, it’s already clear that Mozambique’s ruling party has clung onto power by a comfortable margin. Perhaps too comfortable – both major opposition parties are contesting the results, alleging widespread irregularities. Even so, Frelimo has not had it all its own way. A precipitous drop in support means the party has lost that precious two-thirds majority in parliament, and might just have to compromise every now and then. By SIMON ALLISON.

In the run-up to last week’s presidential election in Mozambique, both main opposition parties were bullish about their prospects for success. Renamo, the old civil war militia, thought they could win the thing entirely, all on their own. The Mozambican Democratic Movement (MDM), meanwhile, was focused on denying the ruling party an absolute majority, and forcing a run-off election in which an opposition coalition could cause an upset.

It didn’t happen like that. The Frelimo juggernaut rolled on, its potent combination of huge funding, unlimited airtime on public broadcasters and historical appeal proving effective enough to garner more than half the electorate. Although official results are yet to be released, provisional results and a parallel count from the Electoral Observatory of Mozambique give Filipe Nyusi, the Frelimo candidate, 60% of the vote, compared to 32% for Renamo and just 8% for MDM. Barring some kind of cataclysm, Nyusi will succeed Armando Guebuza as the next president of Mozambique.

In most democracies, this would be cause for celebration. Sixty percent is a pretty convincing majority. But not in Mozambique, and not for Frelimo, for whom this represents a precipitous decline in popularity from the 75% they garnered last time round. Nonetheless, Frelimo are still celebrating, because it could – and perhaps should – have been even worse. Both the MDM and Renamo have lodged complaints with the electoral commission, alleging that the vote was fixed. Renamo leader Afonso Dhlakama went so far as to call it a “charade”, and maintains that his party were the actual victors (granted, Dhlakama has claimed this of every election in which he has participated).

Even more concerning than the percentages in the presidential vote – which, once a winner is confirmed, become irrelevant – is that this decline is mirrored in the parliamentary election which was conducted at the same time. The MDM were big winners here, going from eight seats to 30 at the time of writing, with more still to be decided. Renamo did well too, securing at least 75 compared to the 51 they held in the last session.

This means that while Frelimo maintains a slim majority in the National Assembly, it has lost its two-thirds majority which allowed it to make constitutional amendments at will. And the resurgent opposition will make it very difficult for it to simply dictate legislation, despite that majority; to avoid stoking tensions, and to avoid becoming even more unpopular, Frelimo will have to be seen to be working with MDM and Renamo in parliament.

“Now Frelimo have to listen,” said Luis Job Mutembene, a senior MDM official. He told the Daily Maverick that MDM and Renamo would work together to keep the Frelimo government in check. “That will be the way, the opposition must be together in the parliament. Nobody can walk alone.”

Renamo, however, seems to have other ideas. Empowered by its sudden surge in support – it looks to have doubled it percentage of the vote – it wants a share of the spoils in the form of the creation of a government of national unity, along the lines of the ones created in Kenya or Zimbabwe, with Renamo leaders given ministries and perhaps a vice-presidential position created for Dhlakama. In fact, it’s not hard to see where Dhlakama may have got this idea – Raila Odinga, who became prime minister in Kenya’s government of national unity, was the head of the African Union observer mission in the country for these elections.

“Nyusi will have to deal with a reinvigorated Dhlakama on steroids, putting pressure to get more benefits,” commented Mercedes Sayagues, a freelance journalist (and Daily Maverick contributor) who specialises in Mozambican politics. “Renamo is looking to apply the South African band aid, the magical ointment for all African problems – a government of national unity! This South African export sometimes work, but balloons government administration so everyone gets a turn to eat.”

Underpinning Renamo’s demand is the ghost of the civil war which Renamo resuscitated earlier this year. Renamo renewed attacks on government targets, killing scores of military personnel as well as civilians in the process, and Dhlakama retreated to his military base in the bush. He only returned to electoral politics when the president gave in to his demands, and Frelimo will be desperate to avoid a repeat performance. Not that they’ll roll over quietly.

“Clearly Frelimo will not accept a unity government,” said political analyst Joseph Hanlon in the Mozambique Political Process Bulletin. “Its bottom line in the 1990-92 Rome peace talks was that Renamo had to accept the legitimacy of the government and constitution, which Dhlakama finally agreed. But the importance of the Kenya example is that there was high level international mediation, Odinga was finally given a senior post, and the government was hugely expanded to create relatively unimportant ministerial and vice-ministerial posts for Odinga’s party. Dhlakama hopes that diplomats will put pressure on Frelimo and the government to make major concessions, even if not granting a unity government.” DM