Refugees: Out of the frying pan and into the fire of South Africa’s healthcare system 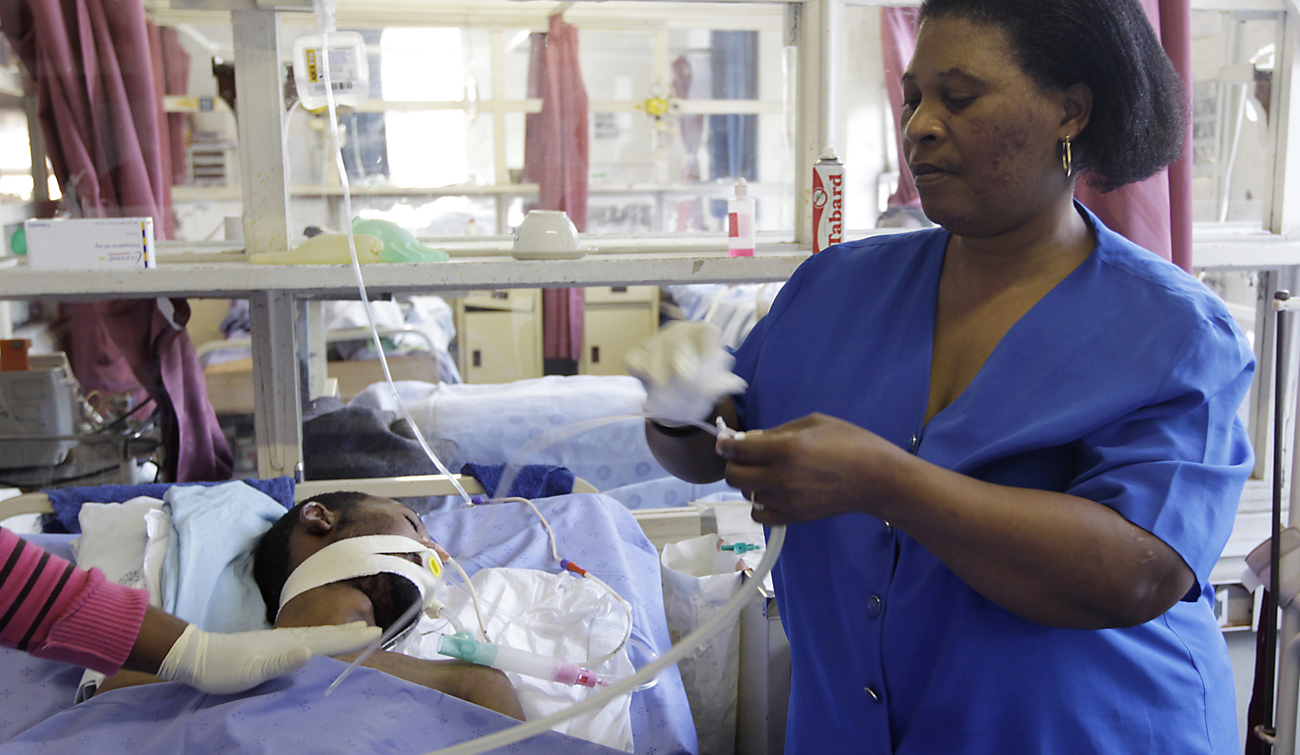 Signatory to the UN refugee convention, and boasting arguably the most progressive Constitution in the world, South Africa is often perceived to be a safe-haven for refugees fleeing conflict and persecution in their own countries. This is a misperception. A 2012 report by the African Centre for Migration and Society found that South Africa consistently failed to meet its legal obligations to protect asylum seekers. SA receives about 61,500 asylum claims annually (although the figures are sketchy), of which it grants only around 16%. Obtaining refugee status is a lengthy, laborious process, and access to healthcare is just one more battle that migrants have to fight. By ANDREA TEAGLE.

Hakim sits uncomfortably on the outside bench at the Jesuit for Refugees Services (JRS) centre in Johannesburg. The profile of his face is red and scarred, his skin dry and cracked. When he starts to talk, his reedy voice strains to break a whisper.

“I am a sick person. I have epilepsy. High blood [pressure]. High sugar… diabetes. Eczema… I am falling always two, three times a week [because of the epilepsy]… The hospital refuse to treat me,” his thin shoulders shrug helplessly. “I must pay money. I don’t have money.”

Fifteen years ago, Hakim arrived in South Africa with a bullet in his back, fleeing ethnic conflict in Ethiopia. Today, despite carrying a refugee permit, Hakim still feels a stranger in this land, whose public servants dismiss his right to healthcare with a single word: ‘foreigner.’

South Africa’s public sector hospitals work according to a means-based payment system: patients are classified according to their income level and charged accordingly. This means that those who can afford it pay the full cost of treatment, while those without no or very little income receive treatment free of charge. It is a system that is intended to protect the poor and vulnerable, and to ensure that we can all realise our right to healthcare. Except that it does not extend to foreign patients without the ‘correct documentation’.

Major Gauteng hospitals, including Charlotte Maxeke (Joburg Gen) and South Rand, openly implement a two-tier admission policy that sieves foreigners from the pool of patients awaiting admission and demands they pay the full costs of treatment upfront. If they can’t? Simple: no payment, no care.

The Migrant Health Forum (MHF), comprising a number of human rights groups including Section27 and JRS, has banded together to challenge the system. While the stated purpose of new draft policy guidelines pertaining to foreigners is to address “… an increase in unplanned patient utilisation, poor budget planning and loss of revenue” in hospitals, MHF contends that the policy merely deflects responsibility for poor services to migrants, thereby failing to address the root causes of a deteriorating healthcare system.

The South African Constitution provides that everyone has the right to healthcare. The wording here is important, says Bonita Meyersfeld, director of the Centre for Applied Legal Studies (CALS) at the University of Witwatersrand. Certain rights laid out in the Constitution, such as the right to vote, are particular to South African citizens; however, everyone is read to mean every human being, regardless of nationality.

“It’s a no-brainer that what they are doing is a breach of the Constitution,” Meyersveld says, adding, “South Africa owes so much to other African countries, which granted refuge to thousands of exiles during Apartheid. That we are now turning our back on them is an absolute shame.”

Although both the Refugee Act (no 130 of 1998) and the Patient Classification Manual provide for documented foreigners to be treated like South Africans, the distinction between those with permits and those without is not always made in practice. Equally, the right to emergency care (in theory enjoyed by everyone) is one that is often forgotten when the patient in need is clearly not South African.

When Hakim arrived at Charlotte Maxeke Hospital (Joburg Gen) a few weeks ago with a serious internal head wound from falling during an epileptic fit, he was told he was a foreigner and therefore must pay.

“I have to pay first R5,000 and then they will tell me how much I must pay [for treatment],” Hakim says, recounting the experience.

The pricing schedules on display at Joburg Gen confirm that R5,000 is the amount to be paid upfront by foreigners for ‘emergency/outpatient’ visits. (Maternity care is priced at R15,000 and cardiology at R125,000). At South Rand, foreign patients are charged a minimum of R1,500 for emergency care, and R8,000 for maternity cases. Nowhere do these schedules indicate that these prices pertain only to undocumented refugees, or that the emergency fee does not need to be paid upfront.

Despite the posters, Joburg Gen public relations officer Lungiswa Mvumvu maintains, “Refugees and asylum seekers receive treatment free on presentation of documentation. Where there is no documentation, emergency treatment is not denied.”

In August this year, Gauteng North High court ruled that a 12-year-old Somali girl must receive heart surgery after she was denied treatment at Steve Biko Academic hospital. Her family says that she was refused admission because she was unable to pay the R250,000 deposit. The hospital denied the claims.

If turning away legal migrants or those in an emergency situation is unlawful, why is there no provincial overlook to ensure correct and consistent practice at the hospital level? Part of the problem seems to lie in the confusing array of policy documents that relate to foreign patients access to healthcare.

“The various policy documents in circulation contradict each other, sometimes the Constitution, and frequently the practice in hospitals,” says Sasha Stevenson of Section27.

The Patient Classification Manual clearly provides that refugees, asylum seekers, as well as undocumented SADC citizens and pregnant women and children under six are all exempt from the upfront payment system. However, the ‘Non-South African Citizens Guidelines’, a draft policy document, provides only ‘basic health care’ for maternity cases, and makes no mention of exceptions for SADC citizens. Moreover, the guidelines make it the responsibility of admission clerks to report illegal foreigners who present for treatment, presenting yet another healthcare hurdle for asylum seekers who fear deportation.

Although the guidelines are still in draft form– and according to Gauteng Health, not in force – JRS has noticed an increase in complaints from refugees seeking healthcare since their circulation late last year. “In line with this new policy a lot of people are being denied treatment. Pregnant women, children younger than 6…” says Samson Ogunyeni, regional officer at JRS.

Further contributing to tissue is unclear wording (e.g. ‘emergency’ and ‘basic healthcare’), which makes policy interpretation subjective and enables hospitals to defend decisions to turn away patients. To illustrate the issue, Lungiswa Mvumvu of Joburg Gen affirmed, “The patient classification manual clearly states that non-south African women and children…are expected to pay”. Yet the Gauteng Department of Health revealed, “basic healthcare [provided for everyone] includes but is not limited to health care services provided at primary health care facilities, maternal and child health, HIV & AIDS etc.”

Susanna (not her real name), a nurse who assists refugees at JRS in seeking healthcare, says that HIV positive patients, and people with other chronic conditions, have also been affected.

“Some of the patients [who come to JRS] have been told free ARV medication is not available. They must travel a long way to get to clinics that will treat them. Many are defaulting on treatment. Dying before they are even attended to.”

The Gauteng Department of Health has dismissed claims of discrimination, maintaining that the Patient Classification manual applies to South Africans and non-South Africans equally. Responses from hospitals either denied discriminatory practice, or referred questions to the Gauteng Department of Health. Meanwhile, the rights groups of MHF continue to fight for the healthcare rights of refugees like Hakim. He cannot go home, and for him and others like him, receiving treatment is a matter of life and death.

The Ethiopian gets up from the bench and limps away. He is lost amidst a crowd of refugees waiting patiently for assistance at JRS: one of the few havens willing to help them translate their rights from paper to reality, and to negotiate a new life here. DM

During filming for the Wolf of Wall Street Jonah Hill had to be hospitalised for snorting too much fake cocaine.