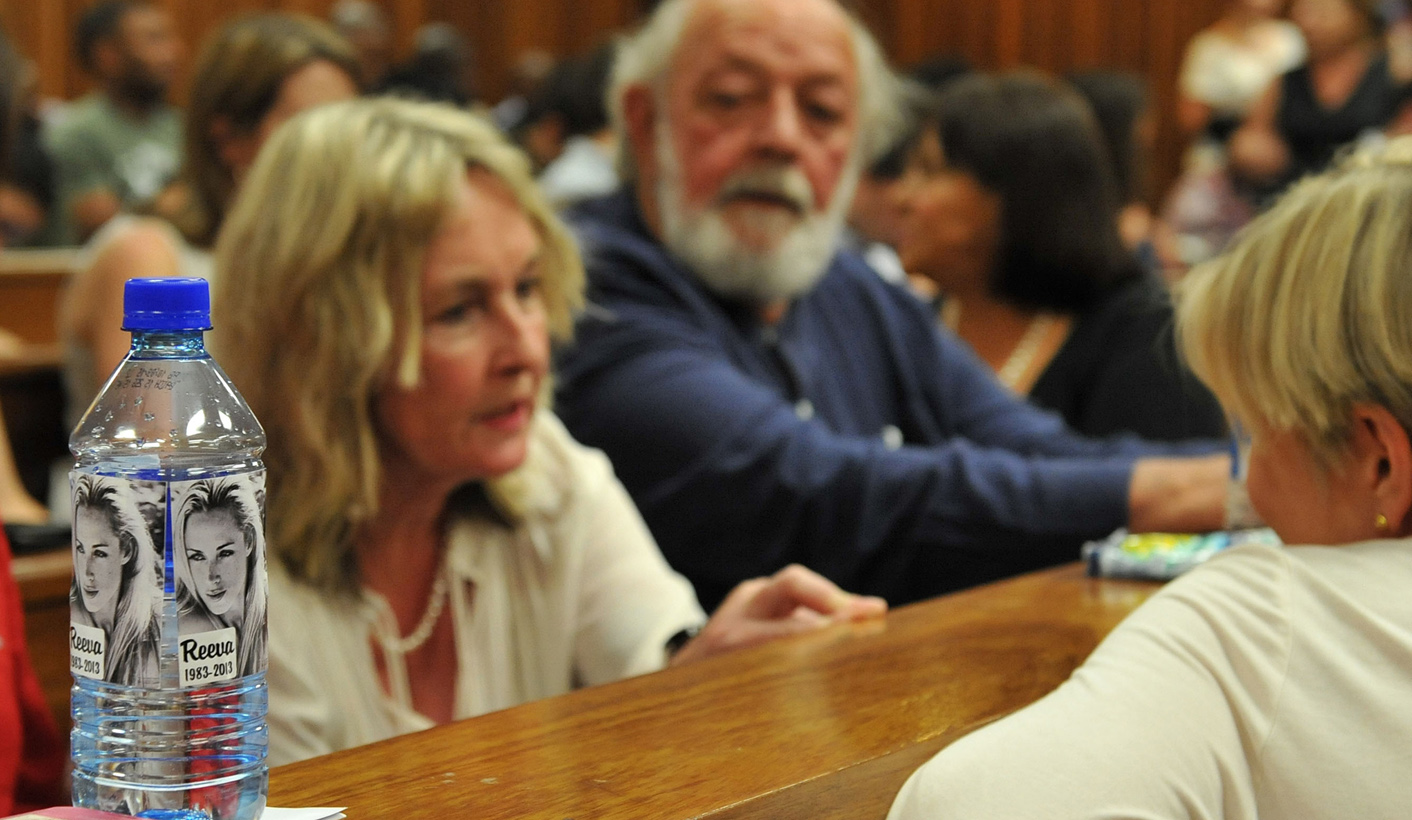 So far the sentencing of Oscar Pistorius has been dominated by those sympathetic to him – his counsellor, his manager and two officials recommending correctional supervision. On Thursday, the court heard the side of Reeva Steenkamp's devastated family. By GREG NICOLSON.

“I hope to God he’s cheating on Reeva,” Steenkamp’s cousin Kim Martin told her husband when she heard on the radio Pistorius had allegedly shot his girlfriend. She called Reeva repeatedly; there was no answer. Her husband turned the car around and drove to Martin’s mother’s house. The door was already open. “Please just tell me it’s not Reeva,” Martin pleaded. But her worst fears came true.

Martin, the prosecution’s first witness in the sentencing of Pistorius, told the court on Wednesday of Steenkamp’s work ethic, her love for her family, and ultimately the devastation caused by her killing. She followed four witnesses brought by the defence who claim Pistorius accepts responsibility for what he has done, is a broken man, and will best be served by a three-year sentence of correctional supervision, including house arrest and 16 hours of community service a month.

Pistorius, who was found guilty of culpable homicide for killing Steenkamp and illegally discharging a firearm, wept in court – like many who listened to Martin’s emotional testimony.

For the first time since the trial began, Steenkamp was no longer the dead corpse occasionally featuring. Her trials and tribulations were brought to life. Martin, who was 12 years older than her cousin, says they had a “very strong bond from a young age”. Reeva loved animals and even as a child was nurturing. Their pet poodle became paralysed, couldn’t walk and would have to be put down. Instead, Reeva decided to carry it everywhere. She “became its legs”, said Martin.

Reeva’s parents Barry and June were never well off, embarking on different business ventures, with various degrees of success, and always had “broken down cars”. Contributing to their financial difficulties, the family was always helping others. Reeva, a hard worker at school, won a bursary and completed her law studies at Nelson Mandela Bay Metropolitan University. Her mother was strict and did not allow Reeva to have boyfriends until she left school.

“Reeva never wanted for love. That’s where her love for family came from,” said Martin, emotional on the stand in the Pretoria High Court. “Family was very, very important to Reeva. Family was everything.” After Reeva broke her back in a horse riding accident – horses were long a part of the family’s life – she decided to push her modelling career. The money was good and she could support Barry and June in Port Elizabeth.

Compared to the Pistorius clan, the Steenkamp family have been relativity inconspicuous throughout the trial. There was doubt whether a family member would take the stand. Through her tears, Martin told the court that she decided to testify because “Reeva needs a voice and it’s my way of being able to pay her back for what she went through”. She was worried about giving evidence about Barry and June Steenkamp but they gave her their blessing to do so. Barry wanted to take the stand himself but was not strong enough to do so, said Martin.

The most emotional part of Martin’s testimony was relating the aftermath of Reeva’s death. When Martin arrived in Port Elizabeth, June was hysterical. She was medicated and just walked around the house shrugging her shoulders the whole time. Barry “just sat in the corner crying, crying crying”. Since then, Barry, who already had health issues, has had “a couple of strokes”. June is showing obvious signs of stress and trauma. “It’s terrible. I’d say it’s ruined our whole family,” said Martin. She is seeing a psychologist for trauma counselling and her daughter spent two weeks in a youth institution for coping mechanisms. “Her and Reeva were close.”

During Martin’s testimony Barry leaned on the wooden railing in front of him to support himself as he sobbed. June removed her glasses to wipe her eyes. Prosecutor Gerrie Nel set out to show the court the damage Pistorius had caused in what he considers a high degree of negligence that should result in jail time for the former athlete.

“Taking the life of another human being is always a serious offence, which leads to outrage and demands heavy punishment and that sentences should indicate to society that our courts and society value human life,” Nel said earlier in the day to defence witness Annette Vergeer, a social worker who recommended giving Pistorius a sentence of correctional supervision.

Vergeer said there are multiple reasons why this sentence is fitting, but Nel honed in on her claims that the prison system cannot cater for the athlete’s disabilities. Her evidence was poorly researched. She used information from a speech by former Popcru general secretary Abbey Witbooi from 2005. Her information on overcrowding came from 2005 and 2008. Vergeer claimed she had contacted the Department of Correctional Services and spoke to a woman but couldn’t name her.

“What I find very interesting [is] that you want to come to court and deal with conditions in prison and you don’t know how the prison is run. How can you do that?” asked Nel. Vergeer had also not referred to legislation that states that prisoners will be assessed for their vulnerabilities, can apply for a single cell and cannot be denied of their medical equipment unless ordered by a health worker. Nel said over the last decade, an average of 128 disabled persons have entered the prison system each year.

“I find it so irresponsible that you would come to court and give an opinion but you don’t know anything about the correctional services department,” Nel told Vergeer, who was frustrated by his persistent questions that at times looked to be stretching for any discrediting factors.

The prosecution will call two or three more witnesses, one who will likely testify on how prisons cater for people with disabilities. Nel will need to counter testimony from the Department of Correctional Services that Pistorius should be given correctional supervision and that he accepts responsibility, has shown remorse and can still be a benefit to society if he doesn’t go to jail.

Judge Thokozile Masipa told the court she is only available this week for the trial as she is occupied in the upcoming weeks. At the beginning of sentencing she asked if the matter would be concluded by the end of the week, but it remains uncertain how longs the state will take to conclude the matter.

Martin will continue testifying on Thursday morning. But it was only on day 46 of the Oscar Pistorius trial that through her, Reeva Steenkamp became a real person instead of the bloodied corpse killed in a bathroom. DM