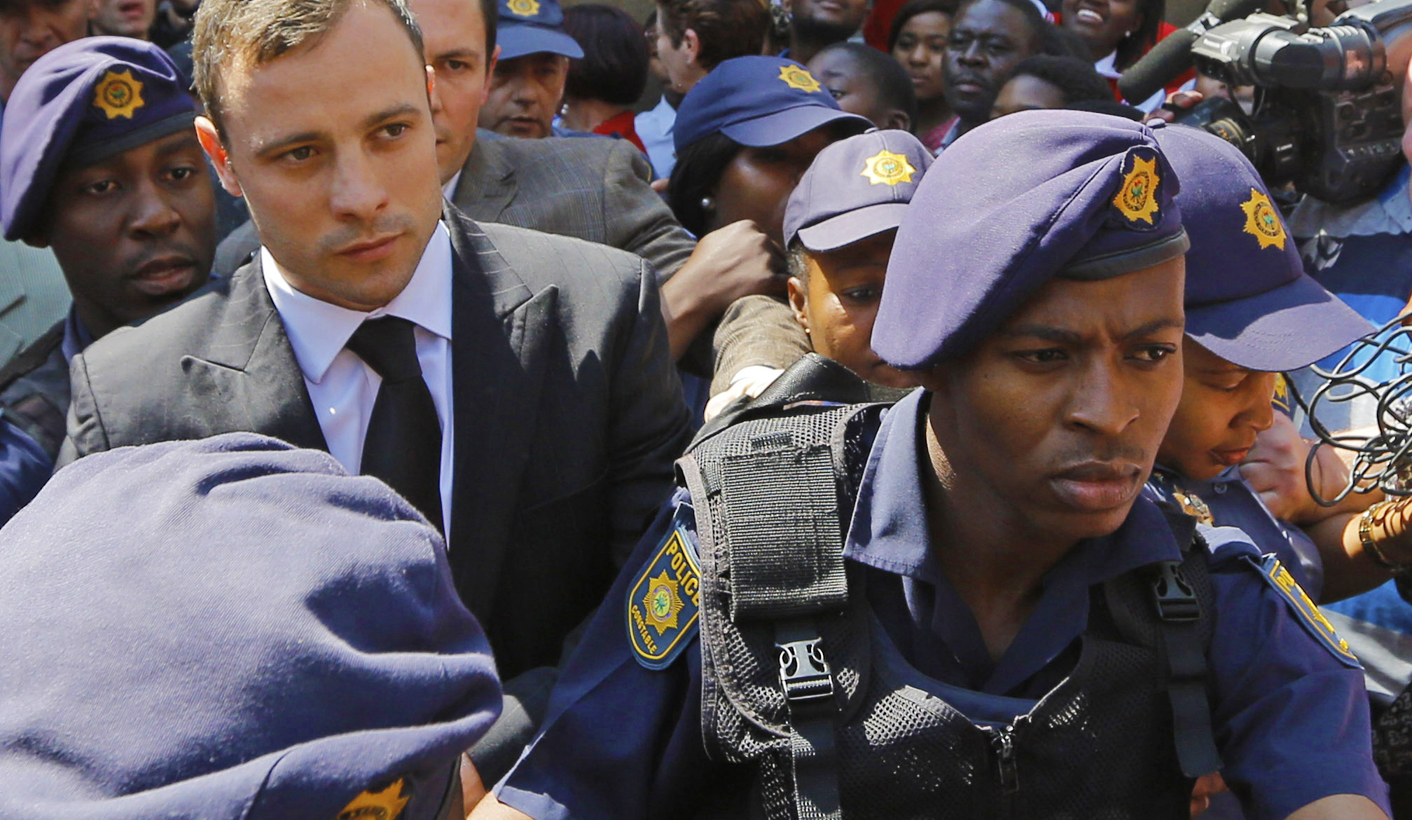 While Oscar Pistorius is due in court to be sentenced for culpable homicide in the killing of Reeva Steenkamp, GREG NICOLSON previews the days ahead and asks what it may mean for the public's perception of the justice system.

“I don’t think they’ll send him to jail,” says one waiter outside a Braamfontein cafe on Sunday. Why? “Bribery.”

“There are many black people in prison with wheelchairs so if they [don’t send him to jail because of his disability] they must release them too,” says his colleague.

After a marathon trial that last month found Oscar Pistorius guilty of culpable homicide for shooting his model girlfriend Reeva Steenkamp and for negligently handling a firearm in Tasha’s restaurant, the former athlete returns to the Pretoria High Court on Monday for sentencing. Judge Thokozile Masipa could send Pistorius to jail for a lengthy period or he could avoid jail completely with a suspended sentence. Commenting in the media, experts have offered different opinions, but some have said Masipa may show leniency after accepting the argument that he acted negligently while shooting through his bathroom door at what he thought was an intruder.

When Pistorius was found not guilty of premeditated murder, many people reacted with shock and some expressed a lack of faith in the local justice system. Now, they’re looking at what happens in sentencing to either confirm or challenge the belief that a different system of justice exists for the rich, white and famous.

Stan, a 24-year-old entrepreneur who didn’t want his surname mentioned, and 20-year-old creative Tshepiso Tshabalala are discussing the case in a nearby bar. “I believe he killed this girl,” says Stan. “I’m not gonna lie; if it was a black guy, even a rich one, he’d be [found] guilty.” Stan did not believe Pistorius’s defence and says that if he doesn’t go to jail for culpable homicide, he also believes bribery has been involved.

The accusation of bribery and related jokes were frequent after the verdict was delivered but there’s no evidence to even remotely suggest it has occurred and is extremely unlikely. However, it suggests a deep distrust of the justice system stemming from the country’s social divides, inequalities and common lack of accountability for public figures seen as guilty of wrongdoing.

“Murder is murder. No matter what, murder is murder,” argues Tshabalala. “He killed a human being, whether or not it was a mistake. Murder is murder,” she says. “I hate the law because I feel like justice is never served. He’s shot a human being and he’s not even in jail.” The 20-year-old, who struggles to accept that Pistorius is only guilty of culpable homicide, argues that the trial has largely been a waste of time and money. She says the benefit of the hype around the case is that we can all see that the justice system is flawed.

Sentencing is likely to last for a number of days. Both prosecution and defence will get a chance to present their case on what Pistorius’s sentence should be as well present witnesses to support their positions before the sentence is delivered. Judge Masipa will need to weigh the seriousness of the offence, Pistorius’s culpability and society’s interests, but she won’t take into account public perception. The degree of negligence, the regard he had for human life, will determine Masipa’s decision.

Speaking to The Times, criminal law expert Martin Hood said the country now focuses more on rehabilitation than simple punishment when sentencing. “The theory behind this is that punishment should be such that an offender does not commit the crime again. He must be taught why his conduct was wrong and understand the consequences.” Hood added, “Pistorius has only been convicted of a crime of negligence. The law treats a person who’s been found negligent very differently to someone who’s done something [wrong] intentionally. Because of this […] he will probably be punished relatively leniently.” Another expert told the paper that Pistorius’s contribution to society, disability, and level of remorse will be taken into account.

Pretoria News, however, quoted “one of the country’s top criminal law experts and a judge himself”, that the paper said could not be named, who argued the athlete should go to jail for 10 years or more. “There are guidelines in our law pertaining to punishment for culpable homicide, but it all depends on the degree of negligence. In my view, this case was serious. I would think a sentence of 10 years or more is appropriate, but it is entirely up to the judge.”

Outside the Braamfontein Pick ‘n Pay brothers Louis and Coert Vermaak, who have both spent time in prison, think Mapisa was lenient on Pistorius. Coert says what happens will inform the public’s perception of the justice system. “It will set no example [if he doesn’t go to jail]. He must go to jail.”

“At least seven or eight years,” adds Louis. “I don’t judge him or wish him bad or anything but you’ve done the crime; why can’t you do the time?”

From their experience, the brothers say Pistorius will have an easy time in jail compared to average inmates. “Because he’s got money and things I think he’ll be comfortable,” says Louis.

“Anything is possible. You can even buy the wardens, they will bring everything for you,” adds Coert.

“He’ll go to hospital section and things like that. He’ll stay mostly better.”

“I was in prison before; it’s very hard if you don’t have money. But him, he’s got money, his family’s got money, he can go live very nicely, comfortable in jail,” Louis says. DM

South African Paralympic athlete Oscar Pistorius has a police guard as he makes his way through a mass of media upon leaving court following judgement in his murder trial, Pretoria, South Africa, 12 September 2014. Pistorius was acquitted of the premeditated murder of his model girlfriend Reeva Steenkamp in February 2013 but found guilty of culpable homicide (manslaughter). He was granted bail until sentencing in October EPA/KIM LUDBROOK