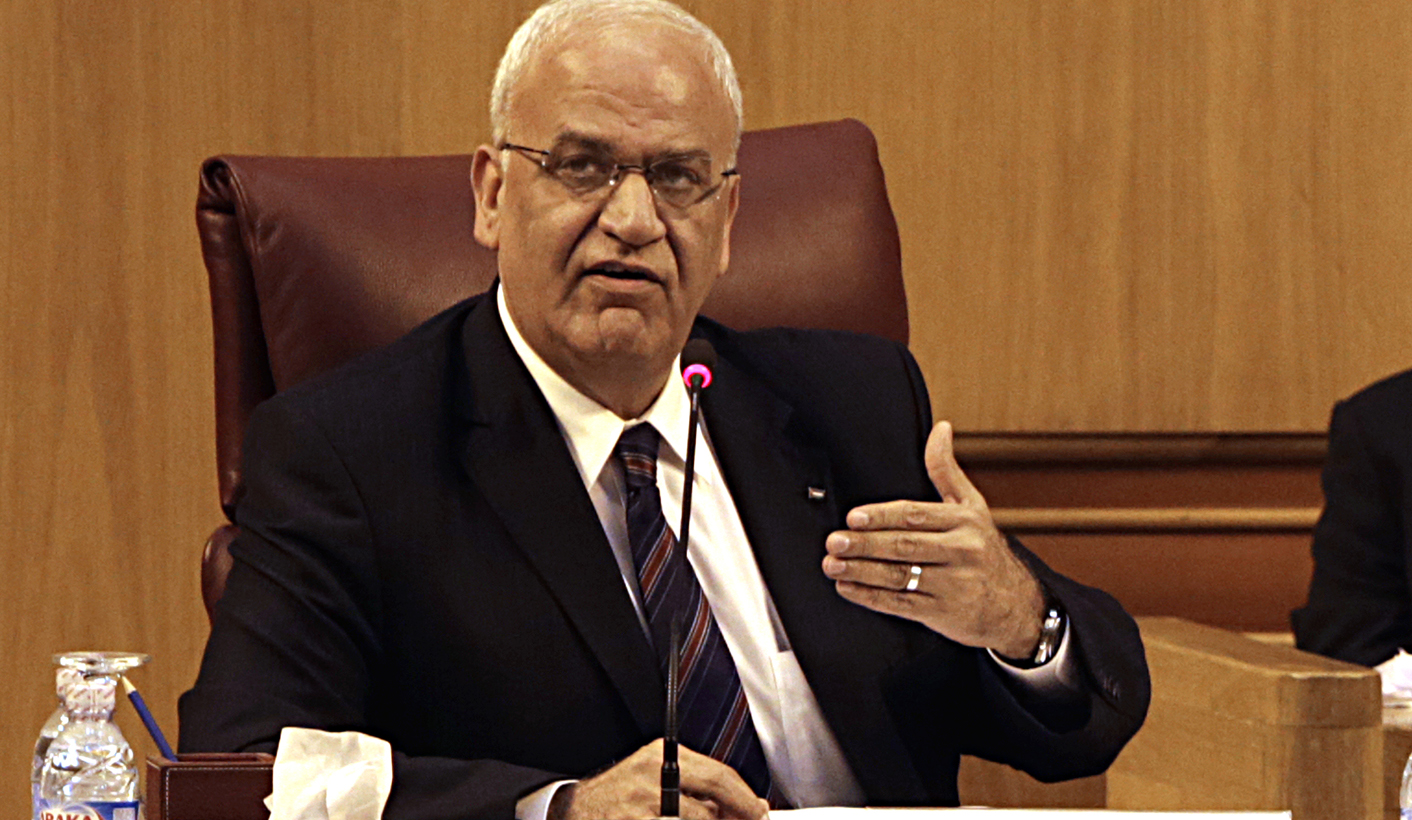 Over coffee, before the formal press conference, J BROOKS SPECTOR gets an unusual opportunity to speak with Dr Saeb Erakat, the Palestinian Authority’s lead negotiator with the Israelis.

While the cameramen for local television stations were slowly trickling in to the room where Saeb Erakat’s media conference was scheduled to take place, the author sat with him over coffee in a Sandton hotel breakfast room. Erakat is, of course, the Palestinian Authority’s chief negotiator – and has been in that position pretty much as long as most people can remember.

Curiously, Erakat looks younger than the image seen so often on television. He’s been a prominent figure on the news and in newsmaker interviews hundreds of times over the past two decades. Erakat jokes that it is the beard – or, rather, the lack of one now. He explains he shaved it off fairly recently and now he has that “youthful look”.

This is a man who knows his way around the West. There are those two university degrees from San Francisco State University in the US as well as a PhD from Bradford University in the UK in the field of peace and conflict studies. He notes with some pride that he has just finished writing a book entitled Islamic vs. Western Negotiation Traditions, which he says is probably the first systematic treatment of specifically Islamic approaches to international negotiations – in a comparative format. One can easily imagine there will be a run on copies of this book by those who find themselves opposite Arab representatives at international conferences – not least in a wide variety of offices scattered all around Jerusalem and Washington.

After all this time in academia, but before becoming a politician and international negotiator, Erakat had taught political science at An-Najab University in Nablus on the West Bank. Thereafter, in 1991, he was deputy head of the Palestinian delegation to the Madrid peace conference and then, three years later, he was the PA’s Local Government minister for the Palestinian Authority as well as the chair of the Palestinian negotiating delegation. In 1995, he was the PA’s chief negotiator at the Oslo peace process, and a year later a member of the Palestinian Legislative Council on the Fatah Party’s slate for the Jericho district as well. (Fatah has held an electoral majority on the West Bank, while the more radical Hamas has held power for nearly a decade in Gaza.) There was obviously some friction with Mahmoud Abbas historically. Erakat resigned as head of negotiations after he had been excluded from a delegation from Abbas’ government to meet Israeli Prime Minister Ariel Sharon. Erekat was later reappointed to that same job and he was active in the 2007 Annapolis Conference. While he reportedly resigned again in 2011, he is clearly still at work at this near-thankless task.

Erakat has actually been an early exponent of peace negotiations from the Palestinian side. In a 1982 article, he had advocated a dialogue between Palestinian and Israeli academics. This article provoked a boycott of his classes by Arab students who protested his “betrayal” of the Palestinian cause. Reportedly, his 1983 exchange project that had brought Israeli students from the University of Tel Aviv to his An-Najah University then earned him the epithet from Palestinian students of carrying out “treason” – as well as an arrest by the Israeli military authorities for “sowing division among Israelis”. Sometimes you just can’t win.

Speaking about the future of negotiations, Erakat explains that after this quick trip to South Africa, he’s off to Cairo for the Gaza donors’ conference where he will be meeting, yet again, with US Secretary of State John Kerry. There is some gentle laughter over the thought that he may well have known Kerry even longer than Kerry and his wife have known each other.

This time around, Erakat is in South Africa to receive the 2014 Global Champion for the People’s Freedom Award from the Mkiva Humanitarian Foundation, in a ceremony in the Eastern Cape town of Butterworth, on Friday. Previous Mkiva awardees include Nelson Mandela, former Ghanaian president Jerry Rawlings and former Cuban president Fidel Castro. Also on the agenda before heading off to the Eastern Cape was a meeting with South Africa’s foreign minister to deliver a formal note from Abbas to President Zuma, accepting the South African president’s invitation to Abbas to visit South Africa.

While Erakat is adamant that it is the Israelis that must change their policies in this confrontation with the Arab world, Erakat also takes care to ensure that it is very clear that he has no truck with the policies of the Islamic State. He asks angrily: Where in the Quran does it call for the chopping off of the heads of one’s opponents? And he rues the attraction the Islamic State seems to have to some young Muslims in Western Europe and other parts of the West.

In this conversation, Erakat seems in a curiously contemplative mood. As we talk, Erakat points to the South African miracle and says that the protagonists in the Middle East should spend time examining more closely the way the South African settlement was achieved, despite the obvious pitfalls and dangers. In effect, Erakat is saying that Arabs and Israelis could learn much from the way a peace accord was reached in this country – as an inspiration for what needs to be accomplished in his part of the world.

As Erakat said some years earlier on the US PBS network’s news program, Frontline, “The uniqueness of my conflict with the Israelis is that it cannot be played as a zero sum game. It’s two winners or two losers, and two losers we have been – dictation, walls, settlements, occupation, bigotry, racism. And winning is only through the path of peace and negotiation. That’s what I’m offering them.”

In this regard, Erakat thinks South Africa could also be more aggressive in inserting itself into Mideast issues, precisely because of its own experience. He added that around a decade earlier, he had been part of a group of Palestinians and Israelis invited by then-President Mbeki to come together with some of the central figures in the South African settlement to draw lessons that might be applicable for the Middle East. And former Deputy Foreign Minister Aziz Pahad and former Cabinet member and high commissioner to the UK, Zola Skweyiya have recently visited the region to search out a possible place for South Africa in negotiations – even though the government has been extremely tight-lipped over what they observed or recommended. Despite the lack of public engagement by the South African government, Erakat obviously believes there is space for South Africa to engage more fully, saying, “If South Africa could be solved, we in the Middle East shouldn’t despair.”

Once in the media conference itself, Erekat said that following the collapse of the most recent negotiations initiative, the Palestinian Authority was would now advocate a UN Security Council resolution to set a definite date for the end of the occupation of Palestine and the establishment of a Palestinian state alongside Israel. Moreover, Erakat indicated the Palestinian Authority looks to sign the Geneva Convention on war as well as the Rome Statute for the International Criminal Court. In theory, at least, that would open the way for the Palestinian Authority to make formal representations to the ICC on Israeli actions in Gaza and the West Bank territories. (How the ICC would respond is, of course, an entirely different matter.)

Running through Erakat’s comments, it seems as if he were challenging the Israeli government to take that deep breath and reach out resolutely to an embrace of the two-state solution – along those 1967 borders, Erakat is quick to add. In effect, Erakat was asking, as has been argued in other circumstances, if the current Israeli government actually has the vision to take to embrace this opportunity, to carry out the Mideast equivalent of “Nixon goes to China” – or, perhaps, an “Anwar Sadat goes to Tel Aviv and Jerusalem”? From what Erakat says, and even in his body language, it appears he doesn’t fully believe Israeli Prime Minister Binyamin Netanyahu is prepared to take this step, however. But will the geographic reality that is there, the demographic trends that are there, and the dribbling away of Israel’s moral standing internationally all serve to be powerful goads to that potential Damascene conversion?

Erakat – perhaps via a rhetorical flourish, but almost certainly as a reflection of the feelings within his own heart as well – says he’s lived with this state of sometimes active hostilities and the more general state of antagonism virtually all his life; and now he hopes this will not be the fate of his grandchildren. Surely it must be a rare person from the Middle East who hopes this conflict will overwhelm the lives of their grandchildren as well. DM

Photo: Saeb Erakat, top Palestinian negotiator (L) addresses an Arab League emergency meeting as Arab League Secretary General Nabil al-Arabi (R) looks on, in Cairo, Egypt, 11 August 2014. The emergency meeting started on 11 August, hours after a new 72h ceasefire had been agreed upon between the Palestinian group Hamas and Israel. Erakat is part of the negotiating team in Cairo which is attempting to reach a peace deal with Israel under Egyptian auspices. EPA/AMEL PAIN