Shuttleworth, The State and the Ubuntu 2.0 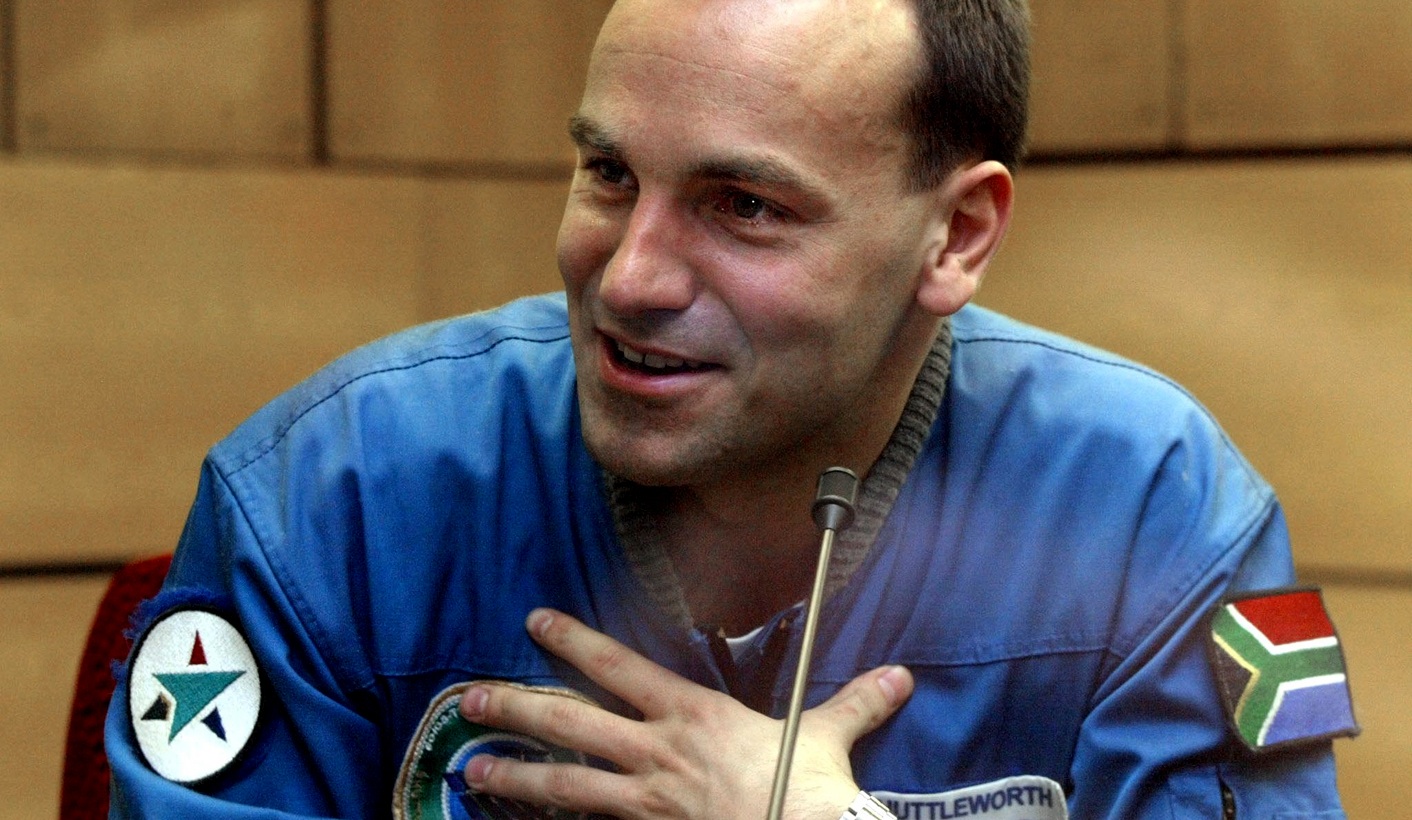 On 1 October, Mark Shuttleworth, the billionaire IT entrepreneur, won a landmark victory against the South African Reserve Bank, who were ordered to repay him a quarter of a billion rand in mis-charged exchange control levies. He then decided to do something that may end up changing our future by rewiring our minds. By RICHARD POPLAK.

What’s in a name? Mark Shuttleworth, it turns out, was indeed shuttle worthy. When the superrich computer nerd rocketed off into the cold black nothingness of God’s armpit, he apparently behaved like a proper astronaut—although he puked a bit of orange juice, he didn’t go acid-trippy like in 2001: A Space Odyssey, even though it was actually 2001. South Africa’s second most famous internet billionaire dropped $20 million to become one of the world’s first space tourists, a trip he treated himself to after selling his Thawte Consulting to VeriSign for $575 million in the heady dot.com boom days of 1999. And what did Shuttleworth learn as he stared into the icy void and contemplated his own insignificance in the face of the Infinite Mother?

Specifically, Shuttleworth does not like exchange control levies—the 10 percent tax once imposed on South Africans looking to ship monies in excess of R750,000 out of the country prior to 2009, when the levy was scrapped because it wasn’t a levy but a tax. Well, we need to be careful here. The levy, said the South African Reserve Bank—the superbly efficient grasping claw attached the long arm of the modern extractive state—is not a tax, but a levy. It says it right there on the box, dammit! Exit levies were meant to disincentivise—SARB’s word—rich folk from shipping their ducats out of the country, and instead encourage them to spend that money here by, say, flipping properties on Clifton or ordering both a salad and an entrée at The Grillhouse.

But Shuttleworth disagreed. Back in 2001, along with dozens of other newly minted hyper-loaded tech royalty, he decided to decamp for the Isle of Man, a British tax haven. (Those who live on the Isle of Man don’t like the term “tax haven”, and prefer “progressive tax regime”. It’s a tax haven.) He was now a rand billionaire, and wanted to move a portion of his R4.2 billion Madibas out of the country. But South Africa’s Exchange Control Regulations, in line with the Currency and Exchanges Act 9 of 1933, blocked him from doing so. This was a somewhat outdated Act, one used by the heavily sanctioned Apartheid regime to dissuade terrified whites from shipping their ill-gotten gains to Atlanta or Brisbane every time there was an uprising in Soweto. For his efforts, SARB dinged Shuttleworth R250 474 893,50.

Now, that’s a lot of money.

It’s almost enough to cover a security upgrade should President Zuma require a second residence. And Shuttleworth believed that it was levied unfairly. Any exchange control, he argued, was wholly unconstitutional, mostly because it represented taxation without representation—Shuttleworth was now a proud resident of the Isle of Man, remember—and that the executive branch of government, under whose jurisdiction the SARB falls, has no authority to impose taxes. So he did what anyone with R4.2 billion would do under the circumstances—he took the bank to court.

In a middle-income economy as absurdly unequal economy as our own, taxes are a funny business. During the early 90s, after the fall of the previous regime, we decided to pretend that money was real and join the global cabal of neo-liberal shell game specialists, thus falling quickly into a trap. Those who worked were taxed, thus underwriting social safety nets both for themselves and for those who didn’t work. In exchange for bankrolling the system, those who paid taxes—along with those who didn’t—were granted a say in how the government went about its business. Every time SARS dinged us, we were literally buying our enfranchisement.

Problems arose when we learned that we weren’t buying anything at all, because the government wasn’t selling. More to the point, they were emptying the treasury in order to build—or should I say, rebuild—a patronage network that benefited a narrow, politically connected elite at the expense of the country’s taxpayers. Just as aApartheid’s white middle class once waltzed through the proverbial spring flowers like so many coked-up Heidis—a privilege they paid for with their taxes and was cheap at the price—the current crop of multi-hued middle and upper classes live in a different universe from the have-nots.

The trap? This sort of arrangement is difficult to sustain when there is no longer a police state to enforce its terms. Which is not to say that it’s possible to sustain with a police state. And yet, governments always try to sustain it. Those Nyalas in your neighbourhood? They’re there to prop up the lie.

I say taxes are a funny thing, because many working South Africans already support five, ten, fifteen family members who aren’t working, and therefore live within a parallel tax system—a very old one that dates back many generations. Which brings us, believe it or not, to our friend Mark Shuttleworth. Following the sale of Thawte, he released a Linux operating system called Ubuntu. That term, of course, refers to the African humanistic ideal—a person is a person through people. Ubuntu rubbishes the central idea of any capitalist society, in which we are all conceived as lone lions chasing down tasty four-legged treats, and too bad if you can’t run fast enough to snag yourself a kudu.

Shuttleworth’s Ubuntu is an open source software with limited proprietary components, meaning that users are encouraged to upload it, improve it, upload those improvements, and make the world—or, rather, the computer—a better place. Once, back when these things were discussed by men with nicotine-stained fingers and furtive eyes, open source promised to be the keystone in a shared economy ushered in by the digital revolution. Open source too often fell in a paradoxical grey zone—software created by a billionaire who lives on an island of money is not exactly the stuff of utopian dreams. But that shouldn’t detract from the fact that it once offered very real possibilities. Sadly, the digital revolution was thoroughly co-opted by non-visionaries like Bill Gates, a man so boring he made a fucking office out of pixels, and those who helped turn the Internet into a one-click shopping mall.

Meanwhile, back in court, Shuttleworth and his lawyers went after SARB. The Pretoria high court ruled against him, so he went to the Supreme Court of Appeal. They were more forgiving. The ruling is worth your time:

The SCA held that a founding principle of Parliamentary democracy is that there should be no taxation without representation and that the executive branch of government should not itself be entitled to raise revenue but should rather be dependent on the taxing power of Parliament. The Court stated that the levy raised revenue for the State in that it brought in ten per cent of the value of any capital in excess of R750,000 exported out of the country, into the National Revenue Fund. Whilst in force, it raised approximately R2.9 billion. The SCA found therefore that the levy thus fell within the category of ‘taxes, levies or duties’ contemplated by sections 75 and 77 of the Constitution.

Booyah! And so last week, the SCA ordered SARB to #PayBackTheMoney, and Shuttleworth decided to take his R250 474 893,50 (plus interest) and give it to—us! You read that correctly, South Africa! You’re a quarter of a billion richer!

“I will commit the funds returned to me today by the SCA to a trust run by veteran and retired constitutional scholars, judges and lawyers, that will selectively fund cases on behalf of those unable to do so themselves, where the counterparty is the state,” Shuttleworth said in a statement on his website. That’s not all. “The mandate of this trust will extend beyond South African borders, to address constitutional rights for African citizens at large, on the grounds that our future in South Africa is in every way part of that great continent.”

A person is a person through people.

Thing is, Shuttleworth’s gift is not charity. Nor is it philanthropy. It’s a statement of belief in the Constitution, and a resounding endorsement of due process. More importantly, the case offers us a small moment to imagine a future based on ideal of the past. Oh, I’m not one of those people who wants to revert back to Olden Tymes, when toothaches were terminal and men were basted in mamba venom for skeefing the chief wrong. I am suggesting that South Africa will at some point need to develop a re-upped version of Ubuntu (the ideal, not software), one that can be formulated into a legislative and economic system—mostly because what we have now will not last. I promise you, my friends, it will all come crashing down like mud huts on the embankment of a flooding river. The middle-class dream propagated by everyone from Nelson Mandela to Julius Malema is a chimera, and there isn’t a revolutionary in this country worthy of the name.

Nonetheless, Mark Shuttleworth, billionaire denizen of the Isle of Man, one-time space cowboy who gazed down upon the little blue marble that is Earth, has given us a glimpse of the future. He’s reminded us that we are networked, that our lives are open-sourced, that any nation is a software programme that only works if the code above and below is properly rendered. He’s reminded us that South Africa has ideals as native as the soil, and that perhaps its time to start digging them up again.

And while you’re at it, go out there and sue the government. It’s on him. DM