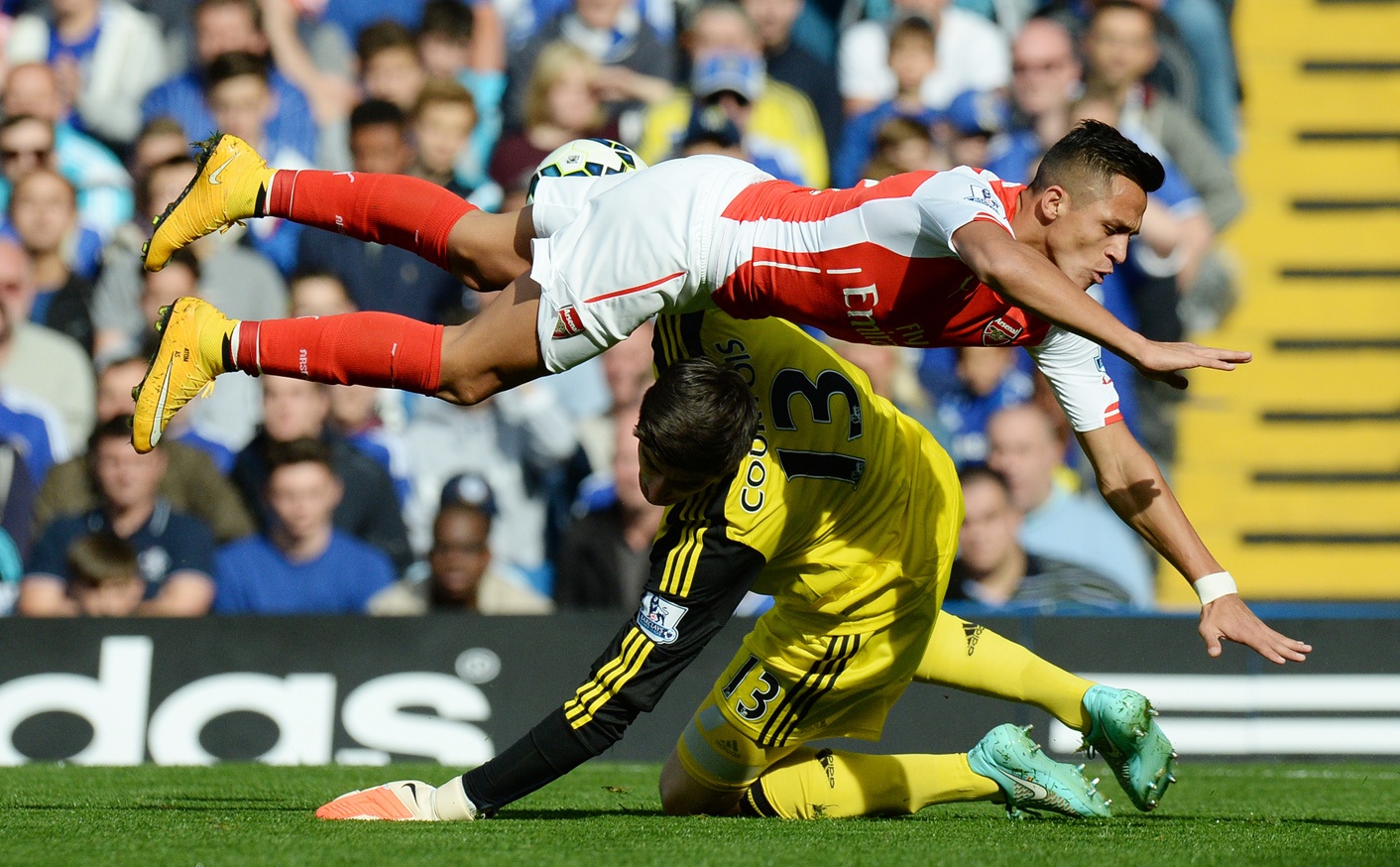 Soccer continues to lag behind in its management of head injuries. Thibaut Courtois might have been fine in the end, but the sport still needs to be far more careful and considerate when it comes to the safety of players’ noggins. By ANTOINETTE MULLER.

Here we are again. Another weekend gone, another head injury on the pitch and another inadequate handling of the issue. It’s nothing new. Last season, Hugo Lloris was knocked out and carried on in a league match against Everton. During the World Cup final, Christopher Kramer was concussed to the point of not remembering that he was in the final, but still carried on before he was subbed. It happens all the time and you’d think that by now, soccer would have learned its lesson. Yet it hasn’t.

At the start of the season, the Premier League introduced new rules that stated a player should be taken off the pitch even if there is just a suspicion of concussion. On Sunday, Thibaut Courtois played on for 13 minutes against Arsenal after a brief – 56 seconds to be exact – examination from Chelsea’s medical staff. He was later subbed and taken to hospital “as a precaution”. His tests came back all clear and Chelsea have subsequently defended their decision to let him play on.

This all happened despite new rules implemented by the Premier League at the start of the season. These rules were meant to see head injuries finally taken seriously in football, but all that has happened is that questions have been raised about whether professional soccer actually gives a hoot about the safety of players.

The Premier League is satisfied that Chelsea’s on-pitch medical team, the first-team doctor Eva Carneiro and electrotherapy lead physiotherapist Jon Fearn, followed the head injury protocols put in place at the start of this season.

Clubs in the Premier League now also have an independent “tunnel” doctor who can assist in recognising the signs of concussion. Premier League medical staff also have a guidebook to help them spot the signs and the rules state: “Any athlete with a suspected concussion should be immediately removed from play, and should not be returned to activity until they are assessed medically. Athletes with a suspected concussion should not be left alone and should not drive a motor vehicle.” In the latest case, there clearly was no reason to suspect a concussion, but Headway, the brain injury association, are questioning just how seriously these rules were being taken.

The tunnel doctor in the Chelsea game could have requested for the match to stop. It didn’t happen. The player correctly answered a series of questions following the collision, which served as their justification for why additional action was not taken immediately.

Peter McCabe, the chief executive of Headway, said: “The new rules introduced this season were designed to ensure no risks to players’ health were taken. They clearly state that, ‘If there is any suspicion of the player having sustained a concussion, they must be removed from the field of play and not allowed to return.’ This incident calls into question whether these rules are working effectively. For example, was the third tunnel doctor consulted on the decision to allow Courtois to continue? If so, did he or she agree that there was no suspicion of concussion?

“From television footage alone it is difficult to assess the severity of any injury and the decision of the medical team assessing the player has to be respected. However, it is hard to understand how a concussion was not suspected following the sickening clash.

“Bleeding from one or both ears is one of the symptoms to look out for that requires an immediate visit or return to hospital following a head injury. The fact that the bleeding only became apparent 15 minutes after the injury also demonstrates the evolving nature of concussion and highlights why a safety-first approach must be taken with all head injuries.”

The Premier League have new rules while Fifa have suggested a three-minute stop in the case of a head injury. No official word has been made on this yet, but at least the Premier League looked like they were making progress, only, they clearly haven’t. In hindsight, of course Courtois was completely fine and nobody wants an overreaction, but the rules clearly aren’t going to be workable.

An alternative could be to follow the NFL model. When hit in the head, a player is taken off, taken to a locker room and tested. If any signs of concussion are shown, the player is taken off the field and cannot carry on. It’s different with soccer because of the rules allowing just three substitutions. With soccer, you would need to introduce some sort of “concussion sub” who can come on and then go off if the test comes back as completely negative. It might impact on the flow of the game, but that is a small price to pay for safety, not just in the immediate future, but also further ahead. DM