Mozambique: The little opposition party that could 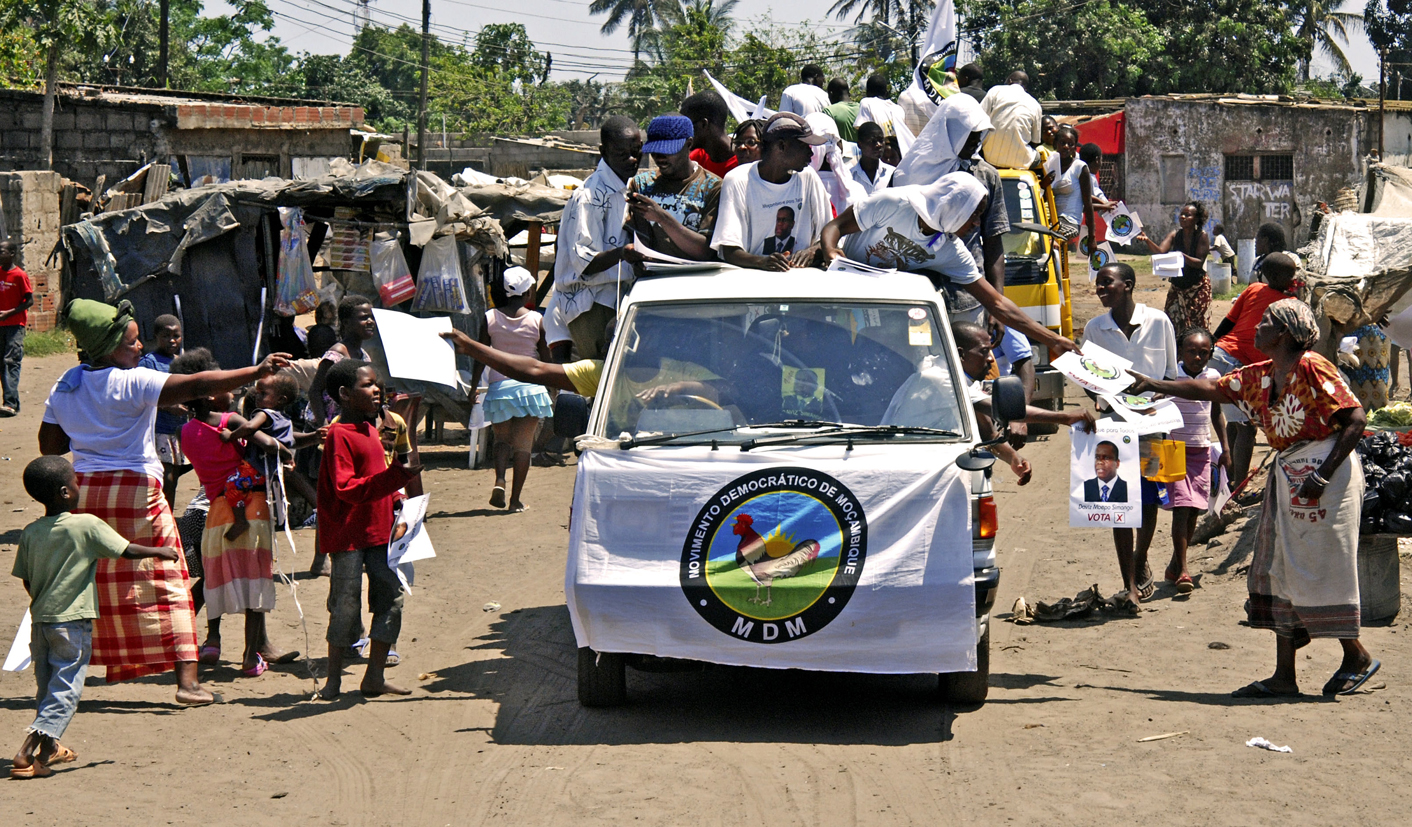 Mozambique’s political duopoly is being shattered by the upstarts of the Movimento Democrático de Moçambique, who reckon they could cause an upset – if not in these presidential elections (coming up next week) then in the next. SIMON ALLISON visits the unlikely Maputo headquarters of the opposition party that is causing consternation in the ranks of the powers-that-be.

Oddly, there is nothing on street level to indicate that the Movimento Democrático de Moçambique (MDM) might be found here, not even a plaque, and inside their third floor office the mystery deepens. It is stark and functional – more doctor’s waiting room than campaign nerve centre – with little other than a desultory light blue table cloth thrown over the meeting room table to indicate party affiliation, or the fact that there is a presidential election in exactly a week’s time.

The MDM presidential candidate, Beira mayor Daviz Simango, won’t win. The dominance of the ruling party Frelimo is such that nothing short of a miracle will prevent their candidate, Felipe Nyusi, from claiming his first term. Unlike the MDM, Frelimo doesn’t shy away from branding. Nyusi’s face is festooned on bright red billboards and t-shirts the length and breadth of this country.

The MDM aren’t expecting a miracle. Not this time, anyway. But they do want to cause a stir, and early signs indicate they might do just that.

Founded in 2009, the MDM has already upset the fragile duopoly of Mozambican politics, in which Frelimo comfortably occupies the Presidency while long-term opposition and civil war foes Renamo snipe on the sidelines (both figuratively and, at times, literally). Simango himself has roots in both movements: his parents were Frelimo stalwarts during the fight for independence from Portugal, before being executed in secret by another faction in the party; while he first won the Beira mayoralty under the Renamo banner in 2003.

Left off the Renamo ticket next time round, however, Simango decided to go it alone – and won. Since then, his new party’s popularity in Beira and other urban areas has soared. They now run three of Mozambique’s four largest cities, and gave the ruling party a major scare in Maputo during the last local elections in 2013. The 41% won by the MDM in the capital is more than Renamo has ever managed here.

This statistic is important. It is easy to dismiss MDM as just a Renamo faction gone rogue, but this would be a mistake. It has cultivated its own powerful constituency among the country’s urban youth, many of whom are disaffected with the lack of opportunities afforded them by the status quo.

“We have a new generation who have never seen war,” said Luis Job Mutembene, the MDM’s head of organisation and communications, in an interview. His implication is clear: this generation is not bound by the sentiment and tradition, by the old ties of comradeship. “They want to prosper, to have a family and a life. But they don’t have the opportunities to build a career or a home.”

It is a large constituency, and in the long term the electoral mathematics could work in the MDM’s favour. While Renamo is struggling to replace its ageing war vets (despite the party’s best efforts to stoke the conflict fires earlier this year), the fountain of disaffected youth is inexhaustible. Mutembene claims there are 100,000 new voters this year in Maputo alone, and that 90% of them will vote MDM (a figure to be treated with caution given its source).

Mutembene bristles, however, at the suggestion that his party needs a rural base if it is ever going to seriously challenge for power. He insists that the party’s one million members are evenly distributed across Mozambique, and that its structures are more widespread and efficient than Renamo’s.

He also doesn’t want to talk just about Renamo. MDM’s ultimate goal is not just to succeed Renamo as the official opposition, but to replace a ruling party that it thinks has lost its way. “We live like we don’t have a government,” he said. “Frelimo the liberation movement was a good idea. But after independence we have seen a new Frelimo that consolidates all opportunities for themselves as businessmen. People who have a different mind are excluded. They work like they are the private sector.”

It’s fighting talk, and Frelimo would do well to take note. The Mozambican economy may be one of the fastest-growing of Africa, but little of that is trickling down. As urbanisation increases and poverty remains endemic, so will the calls for change.

No, Daviz Simango and his MDM won’t win these elections. Frelimo is still too powerful, and Renamo will inevitably split the opposition vote. But watch this space. DM