Elephant conservation: The need for political will 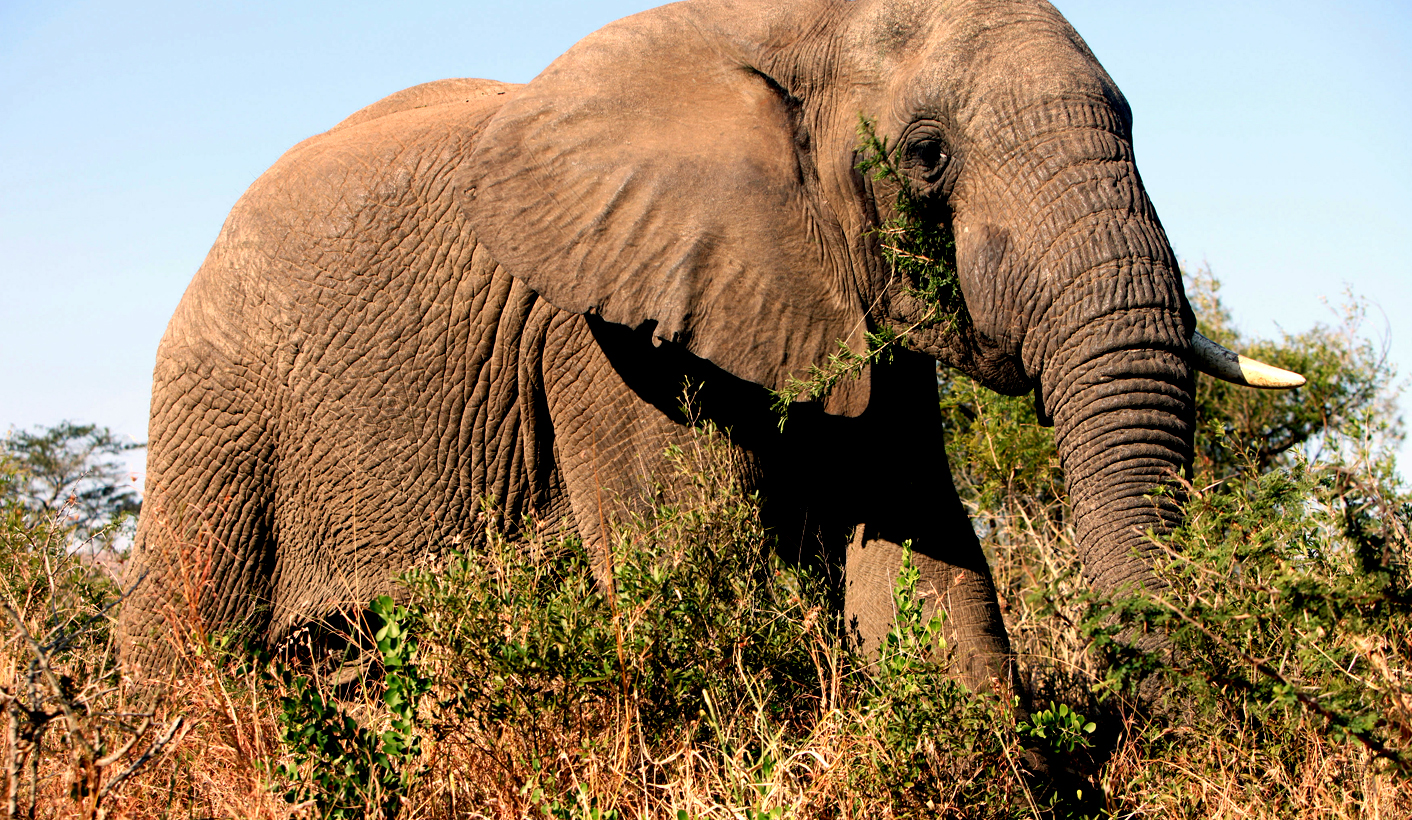 The greatest threat to the safety of Africa’s elephants is not the poachers who prey on them for their tusks; rather it’s the governments of many of their homelands who lack the political will to ensure their safety. Indeed these very governments are in many cases complicit in the demise of these great animals. By SHAUN SWINGLER.

In 2010, Chad had a poaching problem of such magnitude that its elephants were on the brink of extinction in Zakouma National Park. In five years its elephant population plummeted from 4,000 to 450 as poachers wreaked havoc on the herds.

The slaughter of 60 elephants by Sudanese poachers in early 2010 was the final straw. The government called on African Parks Network, an NPO which manages seven African national parks, to take control of Zakouma in an effort to stop the carnage. Between 2010 and 2013 Zakouma’s elephant population had stabilised, and this year the population has actually increased.

This success wouldn’t have been possible had the Chadian government not shown the political will to bring in African Parks, giving them full management control of Zakouma.

Encouragingly, this is not an isolated example of the country’s commitment to saving its elephants. In February this year, the Chadian president, Idriss Déby Itno, signed an agreement which places a 10-year moratorium on any request for permission from the Convention on International Trade in Endangered Species (CITES) to sell Chad’s ivory stockpile. And as an even stronger gesture of goodwill, in the same month the country burnt its 1.1 tonne ivory stockpile.

In a region where the elephant population has dropped by 62% in the last decade, according to a 2013 academic report, Chad’s message is now more important than ever.

Further south, Botswana’s elephant population is thriving. With an estimated 150,000 elephants, according to the WWF, it has the biggest population in Africa – and continues to grow by 5% annually. In part this is due to the country’s small human population, but it is also because Botswana’s stable government has continually committed to ensuring the safety and well-being of its elephants, by deploying its military year round to guard against poachers.

In what many have called a ground-breaking decision, in December 2013 Botswana placed a ban on trophy hunting on state land on the basis that the trophy hunting industry was difficult to regulate, made it easier to facilitate illegal hunting, and had little benefit to local communities.

Conservation groups celebrated the decision, saying it would put pressure on neighbouring countries to take the same action.

Chad and Botswana show us that real improvements can be seen when countries commit their resources to protecting their animals. Unfortunately, countries with strong political will such as this are rare. There are still far too many examples of governments plagued with red tape, bureaucracy and corruption that are failing in their fight to save Africa’s elephants.

In 2013, CITES singled out Kenya and Tanzania as part of its ‘Gang of 8’ problematic countries. They were criticised for lacking any semblance of a competent national action plan to combat the rampant poaching and Interpol has identified them as major source and transit countries in the illegal ivory trade. Sadly, the ‘Gang of 8’ has recently swelled to a total of 19 countries identified by CITES as lacking national action plans to combat poaching. African countries on this list include: Uganda, Angola, Cameroon, Congo, DRC, Egypt, Ethiopia, Gabon, Mozambique and Nigeria.

These national action plans are important because poaching is huge business in Africa. Without clear and concrete plans, it’s going to be impossible for these countries to stay ahead of organised and ruthless international poaching syndicates – wildlife trade being the fourth biggest illicit market in the world after humans, arms and drugs.

Worryingly, Kenyan authorities appear to be in denial about the extent of the problem. Kenyans United Against Poaching, a consortium of community groups, gathered 20,000 signatures to encourage Kenyan President Uhuru Kenyatta to declare poaching a national disaster. The Kenyan Ministry of Environment along with Kenyan Wildlife Services (KWS) have hit back with what can only be described as dangerous claims that poaching has not led to diminished elephant populations, and that calling the current situation a disaster is likely to scare off tourists, according to the Standard newspaper.

In an interview with the Standard, a retired KWS game warder listed staffing issues, poor leadership and resource constraints as reasons for the KWS anti-poaching unit’s lack of success. He argued that instead of indulging the tendency of the Kenyan government to “argue about carcasses”, it would be more productive to identify where improvements can be made and direct resources towards those improvements.

One of the improvements is the penalties imposed on those guilty of elephant poaching.

Until recently, Kenyan judges paid lip service to the penalties for those found guilty of wildlife crimes. The law stated that they could face a KES40,000 (R4,500) fine and/or 10 years’ imprisonment; but, according to a Wildlife Direct study, only 7% of those convicted of elephant and rhino-related crimes actually served prison time between 2008 and 2013.

Promisingly perhaps, in early 2014 Kenya drastically overhauled its wildlife law enacting far stiffer penalties for offenders. A person involved in the killing of an African elephant can now face life imprisonment or a fine of KES20 million (R2.5 million). The first conviction under this new law occurred in January this year, where a Chinese ivory smuggler was ordered to pay KES20 million or face seven years’ imprisonment.

It’s a positive development, but there is still much more that Kenyan authorities could be doing. Feizal Ali Mohamed, a Mombasa-based businessman and alleged ivory kingpin, has evaded Kenyan police since the beginning of June after an arrest warrant was issued for his role in smuggling ivory. The country’s Director of Public Prosecutions has asked the police for an explanation for their inaction and Mohamed still remains at large.

The overwhelming scale of this problem is exacerbated by accusations of complicity by Tanzanian government officials in elephant poaching. The chairman of the Tanzanian Parliamentary Committee on Land, Natural Resources and Environment, James Lembeli, has claimed that senior government officials in departments responsible for wildlife conservation are directly involved in poaching activities. This, Lembeli argues, is why anti-poaching campaigns in the country have so far been ineffective.

In response to international pressure, Tanzania committed earlier this year to “place beyond economic use” its stockpile of ivory, valued at approximately US$50 million, but has yet to do so and has offered no explanation as to why it has not, casting doubt on the country’s commitment.

More promising, however, is that by 2015, the Tanzanian Wildlife Authority, the organisation responsible for the safety and well-being of its wildlife, will operate independently of Tanzanian government’s red tape, bureaucracy and alleged corruption.

While Kenya and Tanzania show modest signs of hope, the successes in Chad and Botswana demonstrate to us that far more needs to be done by these governments if they hope to put an end to the decimation their elephants. What’s needed is proper political commitment from the Kenyan and Tanzanian governments, to ensure that their law enforcement and judicial authorities implement the law without fear or favour – but one hopes that by these countries finally realise this, it will not already be too late. DM

Photo: An elephant is seen at the Hluhluwe Imfolozi Game Reserve in Kwa Zulu-Natal, some 250 km north of Durban, South Africa, 20 June 2010. The Hluhluwe and Umfolozi reserves were founded in 1895 and are the oldest such sanctuaries in South Africa. EPA/ALI HAIDER