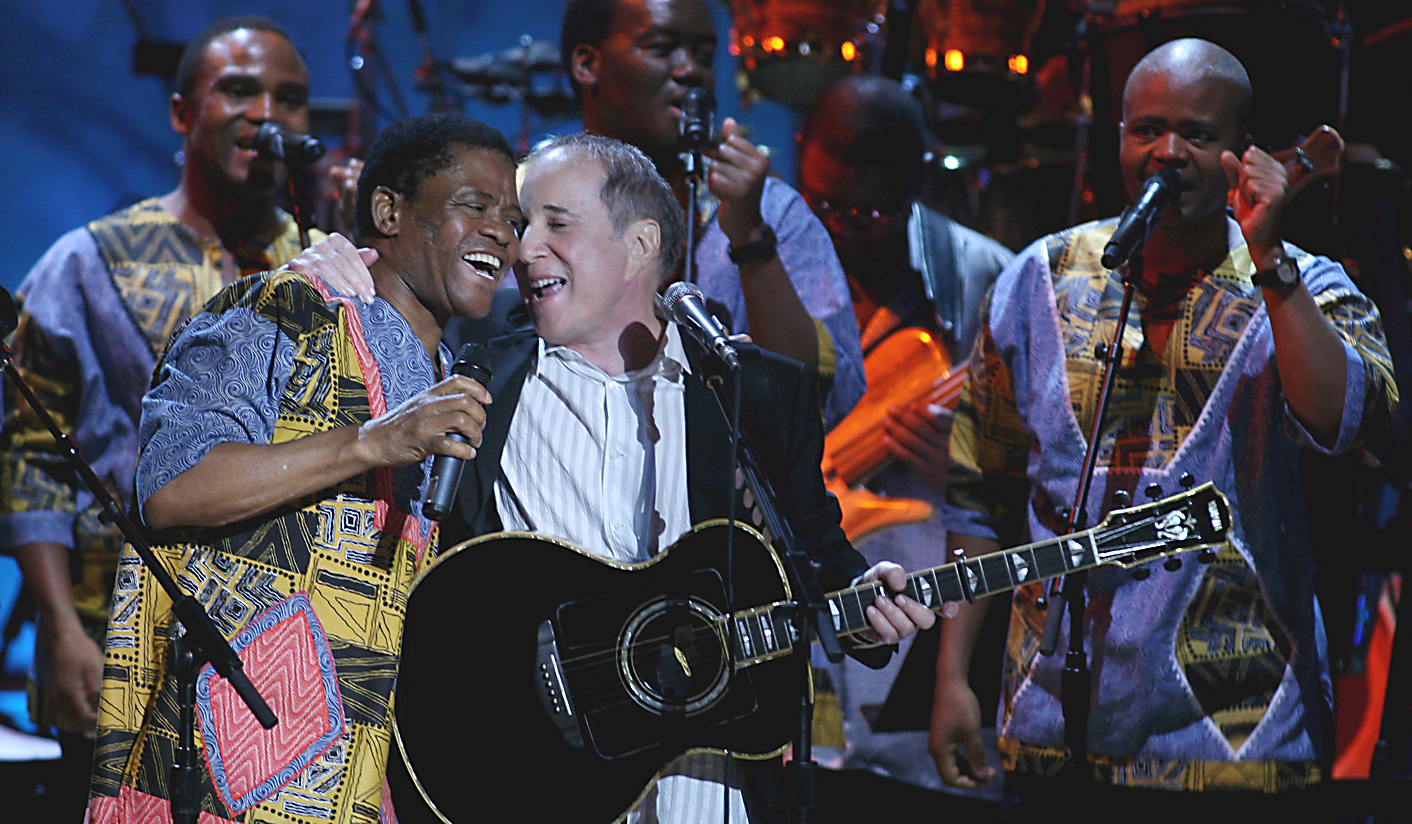 It’s been 21 years since multi-Grammy winners Ladysmith Black Mambazo and Paul Simon last played together in New York and almost 29 years since Simon’s groundbreaking Graceland Album was released in 1985, catapulting several accomplished South African musicians as well as the country’s politics into the international spotlight.

In many respects Graceland was the album that shouldn’t have been – considering the international cultural boycott at the time – but in retrospect it was the best thing that could have happened and today many of the artists who featured on Simon’s collaboration are huge international stars.

Watch: Paul Simon and Ladismith Black Mambazo – Diamonds on the soles of her shoes

Breaking the cultural boycott was a risky move for Simon at a time when the Apartheid government, with PW Botha as president, was responding increasingly violently to ongoing internal resistance. In 1985, the year Simon slipped into South Africa to record with a range of artists whose music was largely ignored by the state broadcaster the SABC, Nelson Mandela was 67 years old and still imprisoned, a State of Emergency had been declared, activist Victoria Mxenge had been assassinated in Umlazi by a hit squad and all around the country bombs and limpet mines exploded regularly.

But it was the unique nature of the collaboration between Simon and the South Africans that brought to the album a palpable sense of celebration and indeed focused even more attention on the country and its politics.

It was the unforgettable bass of Bakithi Kumalo, the guitar wizardry of Ray Phiri, the angelic harmonies of Ladysmith Black Mambazo, the distinct sound of Mahlathini and the Mahotella Queens and others as well as Simon’s extraordinary lyrics that have made Graceland an enduring world classic and a quintessential celebration of South Africa’s artistic spirit.

Ladysmith Black Mambazo will also perform at a Carnegie Hall Family Concert on 19 October in the Zankel Hall.

The Ubuntu Festival, which is a tribute to Nelson Mandela and South Africa’s rich musical heritage, launches on 10 October with Hugh Masekela and Vusi Mahlasela performing a concert entitled “Twenty Years of Freedom” with special guests Dave Matthews and and American songwriter and singer, Somi.

“In creating the Ubuntu festival, we were inspired by the cultural life of this incredibly diverse country,” said Clive Gillinson, Carnegie Hall’s Executive and Artistic Director.

“It is a nation with a dynamic, often surprising culture like no other—the birthplace of larger-than-life musical presences like Hugh Masekela, Miriam Makeba, Abdullah Ibrahim, and now, a seemingly endless array of vocal talent from every corner of the country. Our festival also comes twenty years after the first free elections in South Africa, an anniversary made even more resonant by the recent passing of Nelson Mandela. The country’s landscape continues to evolve, and this makes for fascinating explorations throughout the arts.”

Dizu Plaatjies and his Ibuyambo ensemble will be playing in the Zankel Hall on 1 November at 9pm.

Apart from the performances the festival will also feature a variety of citywide events including a master class by Abdullah Ibrahim and an exhibition by William Kentridge at the Marian Goodman Gallery that runs from 27 October to 26 November. For a the full Ubuntu programme visit carnegiehall.org/SouthAfrica.

The festival is not only a celebration of South Africa’s artistic and musical talent but also the complexity of who we are as well as the spirit that drove and drives us still today, even though sometimes it might – considering the headlines – be hard to hold onto. Beyond the headlines we still sing and dance. And now New York gets to do it our way. DM

Photo: Paul Simon sings with Ladysmith Black Mambazo at the Library of Congress Concert honoring Simon for winning the Gershwin Prize for Popular Song, Wednesday, 23 May 2007 in Washington DC. Paul Simon is the first recipient of the Gershwin Prize for Popular Song, named in honor of George and Ira Gershwin, to be given annually to a composer or interpreter of popular music whose work has been influential on music and society. EPA/Chris Kleponis EPA/CHRIS KLEPONIS