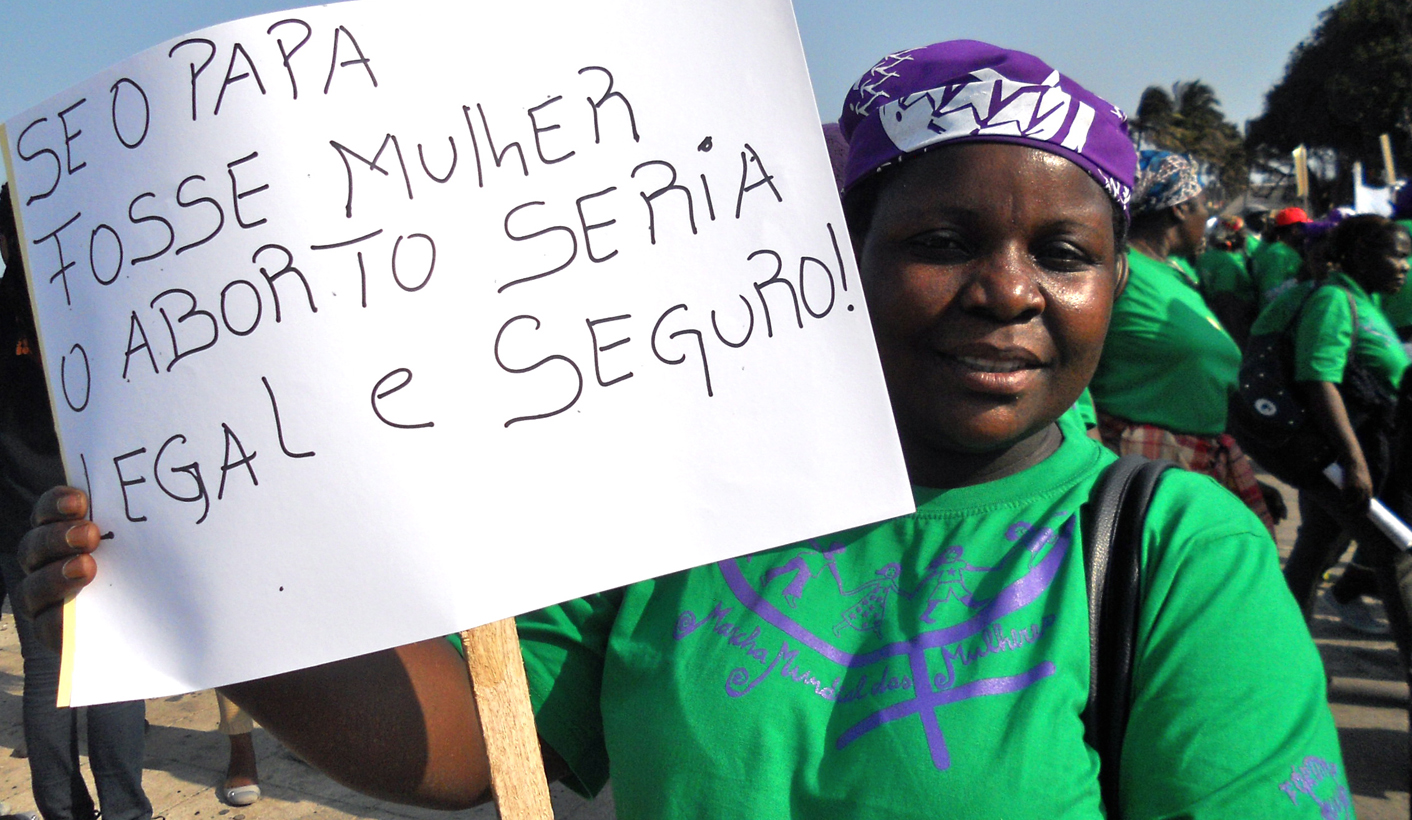 There are only a few countries in Africa where abortion is legal. In the next few weeks, Mozambique will become one of them, with President Armando Guebuza expected to sign a new bill into law. It is a major victory for women’s reproductive rights in Mozambique, and an important legacy for the president as he prepares to step down next month. By MERCEDES SAYAGUES.

This Sunday was the International Day for Safe Abortion, and for once there was good news to celebrate in Africa.

Without fanfare or controversy, Mozambique’s parliament approved in July groundbreaking legislation to legalise abortion and save women from the brutality of clandestine operations. This puts Mozambique among the handful of progressive countries in Africa that guarantee women’s right to control their bodies without unwanted pregnancies. The others are Cape Verde, South Africa and Tunisia.

Fourteen African countries totally prohibit abortion and the remainder severely restrict it, only allowing it, for example, when the mother’s life is in danger. Uniquely, Zambia allows abortion for economic reasons.

The World Health Organisation estimates that every year 1.7 million African women are hospitalised for complications due to unsafe abortion.

Mozambique’s new law, which is part of the revision of the Penal Code dating from 1886, only allows abortions performed by health professionals in health facilities, with the woman’s written request.

Abortion within the first 12 weeks of pregnancy is permitted when the pregnancy can subject the woman to physical, psychological or mental harm, or if she’s at risk of death. In case of severe foetal malformation, abortion can be performed up to 24 weeks into the pregnancy and up to 16 weeks in cases of rape or incest. Girls under 16 or mentally incapacitated females need the consent of a parent, legal guardian or relative.

Photo: To vote for  safe abortion is the duty of MPs (2012 protest)

Amazingly, the law passed without any strong opposition, neither in parliament nor in religious circles, although 28% of the population is Catholic, 18% Muslim and 11% Evangelical Christian.

Back in 2007, the Catholic bishops said in a letter that abortion was a sin and a foreign import, that it corrupts youth and trivialises the sacred power of procreation. But soon religious leaders realised this was a lost battle. The health ministry and the ruling Frelimo party backed the provision of safe abortion. It helped that, after independence in 1975, Frelimo’s Marxist secular regime pruned the churches’ power and influence.

For more than a decade the health ministry has argued that clandestine abortion is a public health problem. It accounts for one out of 10 of Mozambique’s 3,500 annual maternal deaths.

In 2011, according to Maputo city health director Pascoa Zualo, the capital’s hospitals recorded 9,400 admissions due to complications from illegal abortions, with eight resulting in deaths. These figures exclude Maputo Central Hospital, the country’s largest.

Photo: Where is the man who ever got pregnant? Why is abortion only a woman’s crime? (2012 protest)

However shocking, these figures are much better than in the 1990s. One pill changed the abortion landscape: Misoprostol, also known as Cytotec, originally developed in the mid-1980s to treat ulcers, was found to induce abortion. It became popular to end pregnancies in Latin America and reached Mozambique 20 years later. Cheap and stable at room temperature, Misoprostol solved early pregnancy termination in poor settings.

Reporting on abortion in Mozambique in 2012, I found Misoprostol sold in the pharmacies at 150 meticais (ZR55) with a doctors’ prescription and double the price without it.

But self-induced abortion is not a solution. Misoprostol can cause bleeding and requires medical supervision.

He could not change the law – only Parliament can – but he could, as minister, issue a directive. In 1987, he ordered main hospitals to provide safe abortion pretty much on demand. This was a radical gesture, but not enough. Rural women live far from central hospitals. And, as long as abortion was criminalised in the penal code, hospital directors could refuse to provide the service.

Some did. In Gaza province, a project trained nurses to provide safe abortion and community activists to promote family planning and, if it failed, to end pregnancy in hospital. When a Catholic health director took over, he stopped the services.

A law was needed. Unusually, the health ministry and the association of ob-gyns both called for decriminalisation of abortion.

The women’s movement took a strategic position. Formulating the issue in terms of women’s rights could create a backlash. Better to let the health ministry and the doctors hammer out the public health angle, while the NGO, Network for Sexual and Reproductive Rights, trained journalists, produced brochures, lobbied MPs and paid for TV spots.

The strategy worked. On 11 July 2014, parliament approved the new penal code with safe abortion provisions. It must now be promulgated by the President Guebuza, supposedly before a new president is elected on 14 October.

One thorny issue is conscientious objectors: how to ensure that, in rural districts where they may be only one health professional who may object, a woman will still be able to access the service which is now, by law, her right. This, however, is relatively minor in the grand scheme of things, and should be worked out in due course. The important thing is that the reproductive rights of Mozambican women will be legally protected. DM

Photo: If the Pope were a woman, abortion would be legal. (All photos fromk 2012 protest by Mercedes Sayagues)