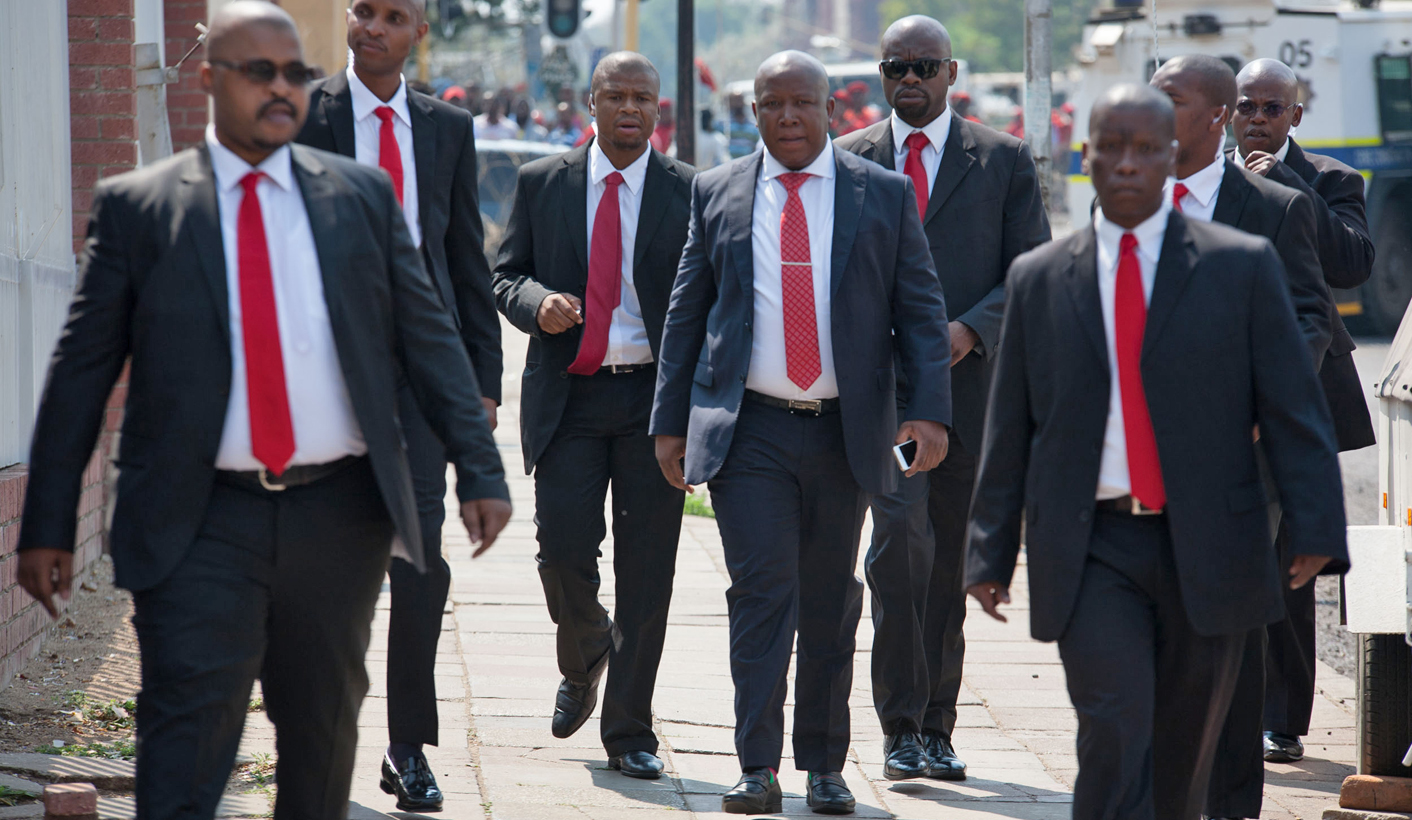 Critics of Julius Malema and the Economic Freedom Fighters hoped the party’s leader would be exposed this month as a hypocrite, the man who sings “pay back the money” but who benefited from an illegal Limpopo tender. It was not to be, and Malema's attack has been bolstered. By GREG NICOLSON.

At 8pm on Monday night, Milton swaggers over after finishing a Castle Lager. “I’ll support him till I fuckin’ die,” says the EFF supporter. “Pardon my French.” Malema’s a Pedi and Pedis need representation, he says.

Cyril hears us talking about the court case. “Justice delayed is justice denied. You’ll see,” is all he can fit in as Milton’s drunken lecture continues. Three students from the University of Limpopo’s Turfloop campus say Zuma is in the news every week for scandals; that’s all we hear. But he’s smart, hard to beat,they say.

Sello Kupa wants to talk. If Malema is found guilty and goes to jail he’ll gladly take his place, he says. “Ask anyone here, they’d do it too.” Standing next to a woman selling meat on a cheap braai, Kupa says the constant postponements in Malema’s case show the state has nothing on him. “What do you think of the ANC?” he asks. Again. “What do you think of the ANC?” Kupa, wearing a polo shirt that barely hides his large waist, says the violence – systemic, like unemployment, and direct, like Marikana – hurts him more than that committed under the apartheid government because he expected more from black leaders. “EFF is doing the right thing,” he says on the antics in Parliament.

Photo: An EFF supporter dances outside the Nirvana Hall on Tuesday morning before marching to the Polokwane High Court where members rallied behind Malema. (Greg Nicolson)

A man in EFF overalls, gumboots and a beret buys boerewors from the braai, takes a bite, and interrupts. “You know why I support EFF?” Mustard and tomato sauce drip on the ground. “Because my father was killed in Marikana. Shot like a dog. If Zuma and Ramaphosa die, I’ll celebrate, have a party!”

About 500 EFF supporters gathered at the Nirvana Hall in Polokwane on Monday night for a night vigil to rally behind their commander-in-chief before he appeared in the Polokwane High Court on Tuesday to face 52 criminal charges, including fraud and racketeering. Malema was to appear with Lesiba Gwangwa and Kagisho Dichabe, co-directors of On-Point Engineering, which won a R52 million Limpopo department of roads and transport contract when Juju was one of the most powerful men in the ANC and his ally Cassel Mathale was premier.

Like Malema’s tax troubles, charges were laid only after the former ANC Youth League leader had fallen out with President Jacob Zuma. Looking into the contract, Public Protector Thuli Madonsela was scathing and saying, “a crime has been committed.” Malema and Co had “benefitted improperly from the unlawful, fraudulent and corrupt conduct of On-Point and maladministration of the department”, Madonsela found.

The supporters on Monday night, however, aren’t convinced. In an environment where for years we’ve heard about politically motivated charges, a one-eyed National Prosecuting Authority (NPA), Zuma’s determination to stay at the top, and the triple ills of poverty, unemployment and inequality, Julius is their leader and they worship him.

“Pay back the money” is their new theme song. The stars of Parliament didn’t appear on Monday night but the officials who addressed the gathering focused on the same theme: Malema’s innocent, Zuma’s corrupt, and the EFF will free the black working class betrayed by the 20 years of democracy.

For Malema’s critics – everyone who doesn’t support him – Tuesday’s case was supposed to expose him and the EFF as opportunist hypocrites. He chants “pay back the money” and was allegedly involved in defrauding the state of R52 million. He is the media’s darling and was successful in the May elections given the party’s recent founding, but a criminal conviction would forever smear his name and potentially relegate the EFF to the status of Cope, or worse, Agang. While endless talk about Breitling and Louis Vuitton have failed, the criminal charges have the potential to damage Malema’s career and thus boost the election chances of the Democratic Alliance and ANC.

But on Tuesday it wasn’t not to be. The Polokwane High Court was on lock down. Rolls of barbed wire stretched around the block as the night vigil 500 massed in a parking lot. Two of Malema’s security personnel waited patiently on a corner. Nyalas and a water canon were ready. EFF leaders such as Floyd Shivambu, Mbuyiseni Ndlozi and Magdalene Moonsamy arrived at court as the media were getting instructions on where to stand and when to shoot.

Finally, Malema arrived with bodyguards in EFF chic – black suits, white shirts and red ties – like a boy band on a reunion tour. He was in court for five minutes. Prosecution and defence had agreed to postpone the trial against he and his co-accused once again, this time until 3 August 2015 because lawyers for his co-accused were unavailable to try the matter now.

“Next year?” a shocked supporter yelled as Malema addressd supporters after his brief court appearance. The EFF leader said he wanted his day in court “so we can close this chapter of allegations against us” and he is willing to be tried separately if his co-accused are not available. That the prosecutor agreed to the postponement showed they have no case, he argued. “We want this case to be held as of yesterday because we have nothing to fear. If they had a case they would have trialled us long ago.”

Malema continued. He claimed NPA head Mxolisi Nxasana saw the evidence and wanted to drop the case, but to keep his job Nxasana told Zuma that the charges would remain. The EFF leader alleged that Gauteng Judge President Dunstan Mlambo was adamant that he must be tried and had intervened in the matter on behalf of Zuma and the ANC.

Then Malema turned to the ANC. “My ambition is to show people there is life outside the ANC.” He said the governing party has no concept of leadership and is now irrelevant because it doesn’t lead discussion on any of the key issues facing South Africa. People say it’s cold outside the ANC because the party would use state resources to punish opponents, he added. “What are the things we discuss when we speak about the ANC? We speak about Nkandla and Jacob Zuma’s corruption,” said Malema, who had to use a megaphone when the generator powering the sound system and microphone stopped working.

Those hoping to turn the conversation from Nkandla to Malema’s dodgy deals will have to wait at least another year for their chance. Meanwhile, the EFF leader’s attack has been bolstered instead of blunted. If the state does have a case, Malema will go on trial roughly six months before the 2016 municipal elections, scant consolation for his critics.

Malema claims he is ready for his day in court, but what of Zuma? DM