The Zuma poser: Will Nkandla break Parliament and SA’s democracy with it? 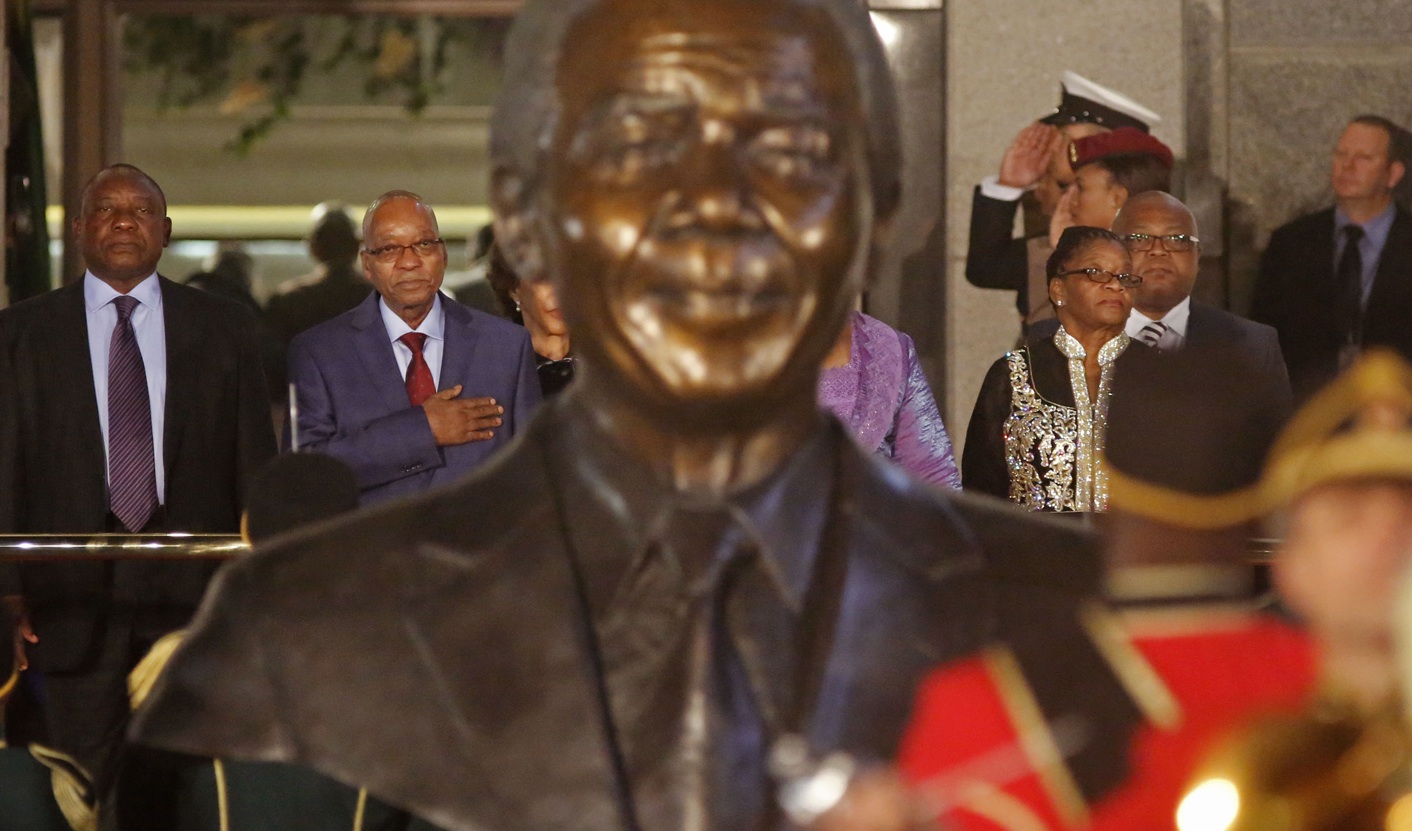 The “Eiffel Tower” code allegedly consenting to corruption, the Spy Tapes transcripts, the mystery of the Russian nuclear deal, the deadlock in Parliament over Nkandla – where does it stop? President Jacob Zuma has been plagued by controversy and scandal many times in his life. Now, however, his presidency is teetering close to the edge and there is no telling which of the various crises swirling around him will push it to the tipping point, if any. This time, there is also a pushback from opposition parties against ANC efforts to protect the president. One option, says Julius Malema, is for the opposition to withdraw completely from Parliament. What then? By RANJENI MUNUSAMY.

There has never been as much public focus on Parliament as there has been in the past four months. It is becoming virtually impossible for any major issue to be debated in Parliament without heated exchanges, MPs being asked to leave the House, the presiding officers being tested or opposition parties walking out.

Parliamentary debates are meant to be vigorous affairs. A clash of viewpoints is almost obligatory as political parties have different policies, interests and perspectives. But the atmosphere in the South African Parliament these days is by no means normal and there is a growing sense that a huge explosion is coming. What exactly? That remains to be seen.

It is important to note that none of the major battles in Parliament in the new term have been over policy or disputes over legislation. They have all, directly or indirectly, been about President Zuma. The ANC has had to go to extraordinary lengths to shield the president from the newest opposition onslaught. The entry of the Economic Freedom Fighters (EFF) in Parliament has sparked new militancy in the opposition, forcing other parties to step up their own pace.

EFF leader Julius Malema and Democratic Alliance parliamentary leader Mmusi Maimane are finding common ground and building a working rapport, and several of the minority parties are following suit. The ANC finds this difficult to fathom and they expected that other opposition parties would have been cautious about working with the EFF. But when it comes to a grand corruption scandal like the state spending on the president’s home at Nkandla, opposition parties have discovered that their voices are most effective when they work in tandem.

The Nkandla matter will not be easy to contend with – for either the ANC or the opposition parties. At the crux of the battle in the ad hoc committee is whether Public Protector Thuli Madonsela’s recommendations in her Nkandla report are advisory or mandatory. Her recommendations included that Zuma should pay back a “reasonable percentage” of the benefits he received unduly and take action against the ministers allowed the exorbitant spending on the project.

The easiest way out, it would seem, would be for Zuma to comply with the recommendations and everyone could move on. But the matter is not as simple as that. The only wrongdoing Zuma has ever admitted to in the series of scandals he had been immersed in was to acknowledge that he had sex without a condom with the woman who accused him of raping her, and apologised for it. In that instance, he was criminally charged and had to admit the facts in order to defend himself in court.

For as long as Zuma is not in the dock, answering questions and standing accountable are not among his list of priorities. Opposition parties in the ad hoc committee on Nkandla therefore want him to appear before them so that he has to answer the questions that he had rebuffed from Madonsela and the Special Investigating Unit.

As DA MP James Selfe put it: “If you look at all the reports, there is a type of scheme that permeates all of them. That is the elephant in the room, the extent of knowledge and consent by the president of South Africa”.

The ANC is well aware that Zuma will not be prepared to answer those questions and therefore need to avoid the possibility of him being placed in the position where he has to. They also know that the opposition, particularly the EFF, would go for the jugular the moment they are presented with the opportunity to question the president. In order to prevent this opportunity from presenting itself, the ANC has to make sure that it relegates Madonsela’s findings and recommendations to an advisory role.

From their side, the opposition cannot let this issue go either. Malema had promised his constituency that he would take on Zuma and the ANC, and the Nkandla matter is as good as it will probably ever get. Malema knows he has the moral high ground and that sections of society that would ordinarily not look in his direction have a grudging respect for the way he is pursuing Zuma on Nkandla.

Maimane has also a lot to prove. Nkandla was his predecessor Lindiwe Mazibuko’s baby. She was the complainant to the Public Protector and the person who tried all possible means to hold Zuma accountable. Maimane came in to Parliament somewhat wet behind the ears and appeared out of his depth initially. However, the Nkandla matter has given him a foothold, and together with Malema, they are marshalling the opposition in a united front against the ANC.

But the matter in question is the enforceability of Madonsela’s recommendations. Under ordinary circumstances, the Public Protector makes recommendations, which are then submitted to the president, who then takes the necessary action. She has no powers to enforce the recommendations. The additional problem is that the person she would ordinarily submit her recommendations to is also the subject of the investigation and the person affected by her proposed remedial action.

Zuma’s correspondence makes it clear that he considers Madonsela’s recommendations to be advisory and that there is no obligation on him to do exactly what she says. Speaking on eNCA’s Judge for Yourself on Sunday, Madonsela said her understanding of the law and Constitution was that the president should respond to her report in its entirety, and if he was of the view that she had acted “irrationally”, he should say so to Parliament. Parliament could then consider her report together with Zuma’s detailed response and “look at whether the president is more rational than myself”, Madonsela said.

But Zuma has not responded in detail to Madonsela’s report, neither has pronounced on her recommendations – other than to defer responsibility for deciding whether he should pay back the money to the Minister of Police. The ad hoc committee therefore cannot properly consider the matter and decide whether the remedial action is appropriate without all the facts. In any event, neither the president nor Parliament can overturn the finding of the Public Protector’s report as only the courts have the authority to do so.

And so the Mexican stand-off persisted in the ad hoc committee for two days last week until the opposition parties eventually walked out, saying they refused to be part of the cover up and defiance of the Constitution being orchestrated by the ANC. By doing so, they left the ANC as the only remaining members of the ad hoc committee, who could now go ahead and prepare a report for the National Assembly based on just their perspectives.

Walkouts might not be the best opposition when the ANC has the numbers to vote on their own. This was what happened during the motion of no confidence debate against the Speaker of Parliament Baleka Mbete, when the ANC voted against the opposition’s motion after they walked out. This is likely to recur on the Nkandla matter.

The opposition parties do not have many options for as long as the ANC can outvote them. They have the option of going to court to force judicial intervention in the matter. There is no guarantee that they would succeed because of the separation of powers rule. They can fight the might in the National Assembly once the ad hoc committee’s report is tabled. But again, with the ANC having overwhelming voting power, they can vote for the House to adopt the report.

Once that happens, the matter would have passed through Parliament without Zuma answering the questions the opposition parties want answered. There will probably not have the opportunity to pin him down on the issue again.

But should that happen, the opposition would fight the ANC outside the bounds of Parliament. ANC secretary general Gwede Mantashe’s warning of “rebels” fighting government would then not be so far fetched. It means South Africa would no longer be a multiparty democracy but an illegitimate one.

Is that really where the Nkandla scandal will take South Africa? Could government and Parliament become illegitimate just so that Zuma can avoid answering questions? Who then exercises oversight over the R1 trillion nuclear deal that already has a fishy stench? Who then asks the hard questions when the opposition is outside the parliamentary framework?

The opposition parties and the ANC better think long and hard before the next steps are taken. There is still ways to pull the situation back from the brink. But hot heads and desperation can push the situation over the edge of the precipice. Unrest and instability could ensue which would be devastating to the economy.

On Tuesday, the ad hoc committee reconvenes. Rationality is desperately needed from both sides. The future of South Africa’s constitutional democracy could depend on it how they deal with the “elephant in the room” – the extent of knowledge and consent by the president of South Africa.

It is in fact the question that hangs over every scandal surrounding the president. And in none of these matters is he prepared to provide a straight answer.

But with every new scandal, the ability of South Africa’s fledgling democracy to absorb the hits and heal the bruises is slowly vanishing. Nkandla could just be the one that could finally break the democracy itself. The one which, if not resolved properly, could render rest of the Parliament’s term a farce, taking down the entire system with it, the system that the ANC spent an entire century fighting for. DM