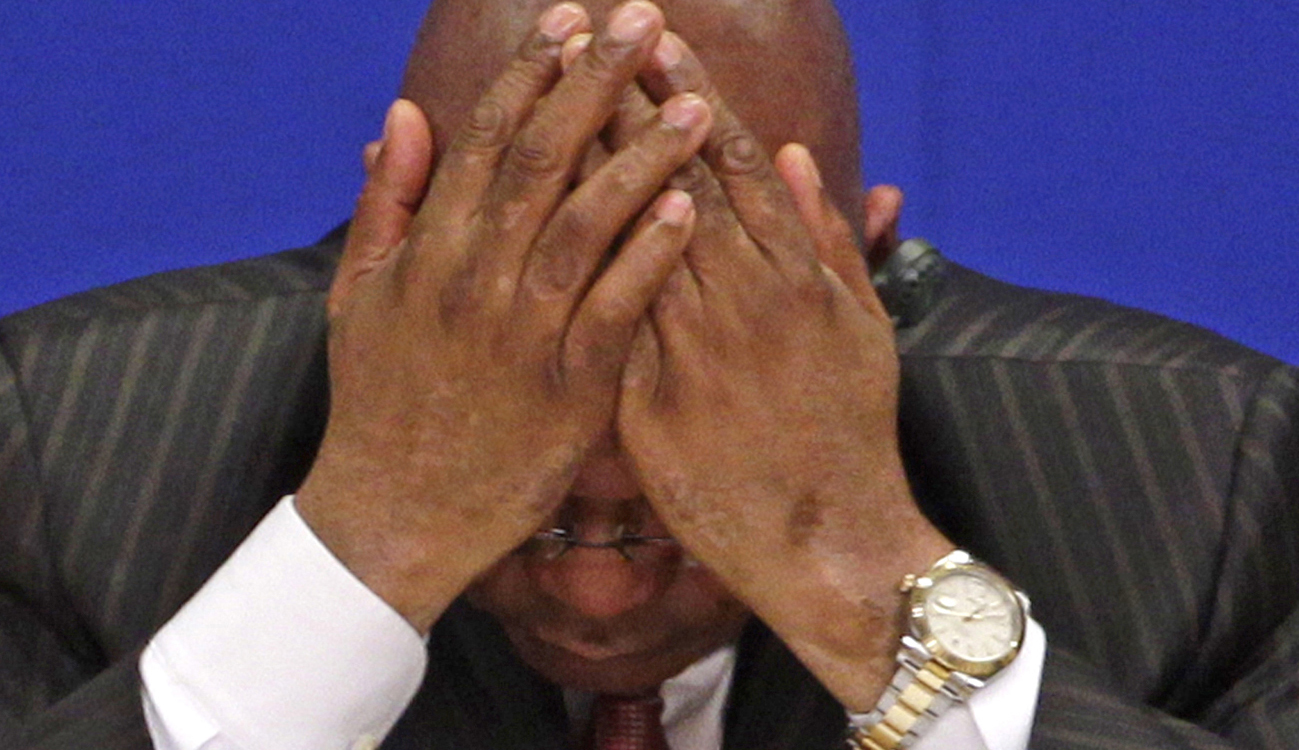 There must have been a way for the ANC and President Jacob Zuma to deal with the scandal over the security upgrades at Nkandla to avoid it becoming the giant, red hot, rumbling volcano it is now. For over nine hours on Thursday, the parliamentary ad hoc committee on Nkandla was bogged down on how to process the Public Protector’s report, as well as the Special Investigating Unit (SIU) report, into the R246 million upgrades. The opposition wants answers to key questions, including how much did Zuma know and was involved. They want president to appear before the committee to answer these questions. The ANC has embarked on a massive stonewalling exercise. Now a legal and constitutional confrontation looms and Zuma’s escape routes are looking increasingly limited. By RANJENI MUNUSAMY.

With the benefit of hindsight, the ANC probably should have dispensed with the Nkandla matter during the previous term. The matter had been successfully delayed since Public Protector Thuli Madonsela’s report on the Nkandla upgrades was released in March. An ad hoc committee set up during the last term was abandoned because the ANC argued there was insufficient time to deal with the issue. The real reason was that the ANC did not want the Nkandla issue exploding on the eve of the May elections.

The ANC and President Jacob Zuma probably thought that deferring the matter until the establishment of the new Parliament would neutralise it somewhat.

How wrong they were.

Opposition parties are determined to deal with the matter extensively, to ensure that Madonsela’s recommendations are implemented fully – including that Zuma pay back money to the state for undue benefits he received – and that the president be made to account for his role and knowledge of the upgrades. Had the matter been dealt with in the last term, it probably would have caused some discomfort and embarrassment for Zuma, and had repercussions for the ANC. But there would have been a finite timeline to deal with it, and if Zuma had given the cursory impression that he was implementing some of Madonsela’s recommendations, it would have taken the sting out of the issue.

Instead it was all put off until now. A new ad hoc committee has been established, and the ANC has made sure that all the Nkandla investigation reports are before it, including the SIU and government task team reports. The official mandate of the committee however is to consider the president’s rather fleeting response to the Public Protector’s report.

Perhaps it is the presence of the Economic Freedom Fighters (EFF) or perhaps other opposition parties are simply fed up with being treated with disdain. The Democratic Alliance (DA), EFF, Freedom Front Plus (FF+), Inkatha Freedom Party and African Christian Democratic Party are now resolute that Zuma needs to appear before the committee to answer the questions he avoided answering to Madonsela and the SIU. Both had sent extensive sets of questions to him about the upgrades; in both instances he disregarded the majority of these.

The ANC MPs on the committee had a pre-determined mandate to demand heavy penalties for the government officials and consultants who were involved in the upgrades, but protect the president from any scrutiny or repercussions. They stuck doggedly to the line, and even seemed willing to throw Public Works Minister Thulas Nxesi and former Police Minister Nathi Mthethwa under the bus for “dereliction” of their duties, along with senior government officials.

But the problem for the ANC is that it cannot control where the opposition ventures now. EFF leader Julius Malema threw in new issues, which up to now had not featured in discussions on Nkandla. He said Zuma should be charged for corruption over the excessive and irregular expenditure on his Nkandla home. Malema said it was not possible that Zuma had no knowledge of the upgrades and costs, particularly after the matter was exposed in the Mail & Guardian in 2009. He also called for transactions from Zuma’s architect Minenhle Makhanya’s bank accounts to be investigated, alleging that there had been a money-laundering scheme to redirect cash funds to Zuma.

“The president is involved in the looting of money of our people. The president must take full responsibility because he willingly took part in this corruption and as result he must be charged,” Malema said. “I smell money laundering. I smell racketeering. I smell corruption.”

He said the president should be made to pay back 90% of the cost of the undue benefits he received. (Madonsela had recommended that he pay back a “reasonable percentage”, to be determined with the help of the National Treasury and police.)

DA parliamentary leader Mmusi Maimane said it needed to be “put to bed that the president was somewhat ignorant of a massive project taking place at his house”. Maimane said Zuma’s responses to the Public Protector and SIU were insufficient and therefore he needed to be held to account by Parliament. His colleague James Selfe alleged there was collusion between Makhanya and Zuma, and that the committee needed to “drill down” on this. With regard to reimbursing the state, Selfe said “everybody seems to accept that the president is responsible for some of the costs”. He said what was left to determine was how much Zuma had to pay and for what.

The ANC’s defences ranged from arguing that the president was unaware of the costs to not having time to pay attention to details. ANC MP Mathole Motshekga argued that people could have name-dropped and that this was hardly evidence that Zuma had influence or involvement in the upgrades. He said the president introducing Makhanya to the government officials could not be construed as him imposing his architect on the project. Motshekga said the opposition had an ulterior motive for wanting to summon Zuma to answer questions and not the accounting officers from government departments.

Opposition MPs became increasingly frustrated when ANC MP Nkhensani Kubayi argued there was no reason to summon any witnesses before the committee as this was effectively starting a new investigation. This launched Malema in assault mode, charging that every time Zuma had to be defended, the institutions of state had to be sacrificed.

“Sometimes you want to defend things that aren’t defendable. That’s what happens when you love party more than the country,” Malema said. “Only person who can tell us if he knew or not is the president. We need to agree that the president must come and explain.”

“If President Zuma cannot be held accountable, then no one can. Why should one man be above the law?” Malema demanded to know. He then went on to question whether Zuma really had a bond to cover the renovations at his home, as he had previously claimed, as no evidence of the bond had been produced. “I don’t think President Zuma has a bond. He has a bad credit record. We know. He even went to ask Mandela for money,” Malema said. He challenged Zuma, who is currently attending the United Nations General Assembly in New York, to produce the bond documents.

Chairman of the committee Cedrick Frolick pointed to a section in Madonsela’s report where she stated she had verified with the director-general in the presidency and the president’s legal team that a bond was in place. However FF+ MP Corné Mulder drew the committee’s attention to a letter Madonsela wrote to Zuma in which she appeals for documents showing proof of the bond. None was provided.

As the meeting proceeded late into Thursday night, opposition MPs proposed that a list of people they wanted to appear before them be drawn up, and that in the meantime, the recommendations of the Public Protector’s report be implemented.

However, ANC MPs then dug in, with Motshekga arguing that the remedial action set out in Madonsela’s report could not be implemented as they were in dispute. He said the question that needed to be answered was whether the Public Protector’s recommendations were “advisory or mandatory”.

Malema threatened to walk out and take the matter to court. “We are not going to be bullied here by the ANC,” he said. Mulder cautioned Frolick not to force decisions on the committee about whether to call Zuma and Madonsela to testify, as well as whether the Public Protector’s recommendations could be implemented, as he said the matters could end up before the Constitutional Court.

After hours of head butting, it was agreed that the meeting should be suspended till Friday morning so that MPs could get expert advice on the way forward.

But the Nkandla matter is now looming large over the president again, and he might be running out of options to evade accounting to Parliament. It seems that after years of employing stalling tactics and deferring responsibility to others, he is running out of room to manoeuvre. The ANC is also floundering as to how to protect Zuma from having to face the consequences. The only option might be to sacrifice the Constitution and confront the prospect of a full-blown constitutional crisis.

If it goes there, there will be nothing left. Except the memory of a once glorious liberation movement and the leader who brought it to its knees. DM