Planes, Blame and Autocracies: How T.B. Joshua will get away with murder 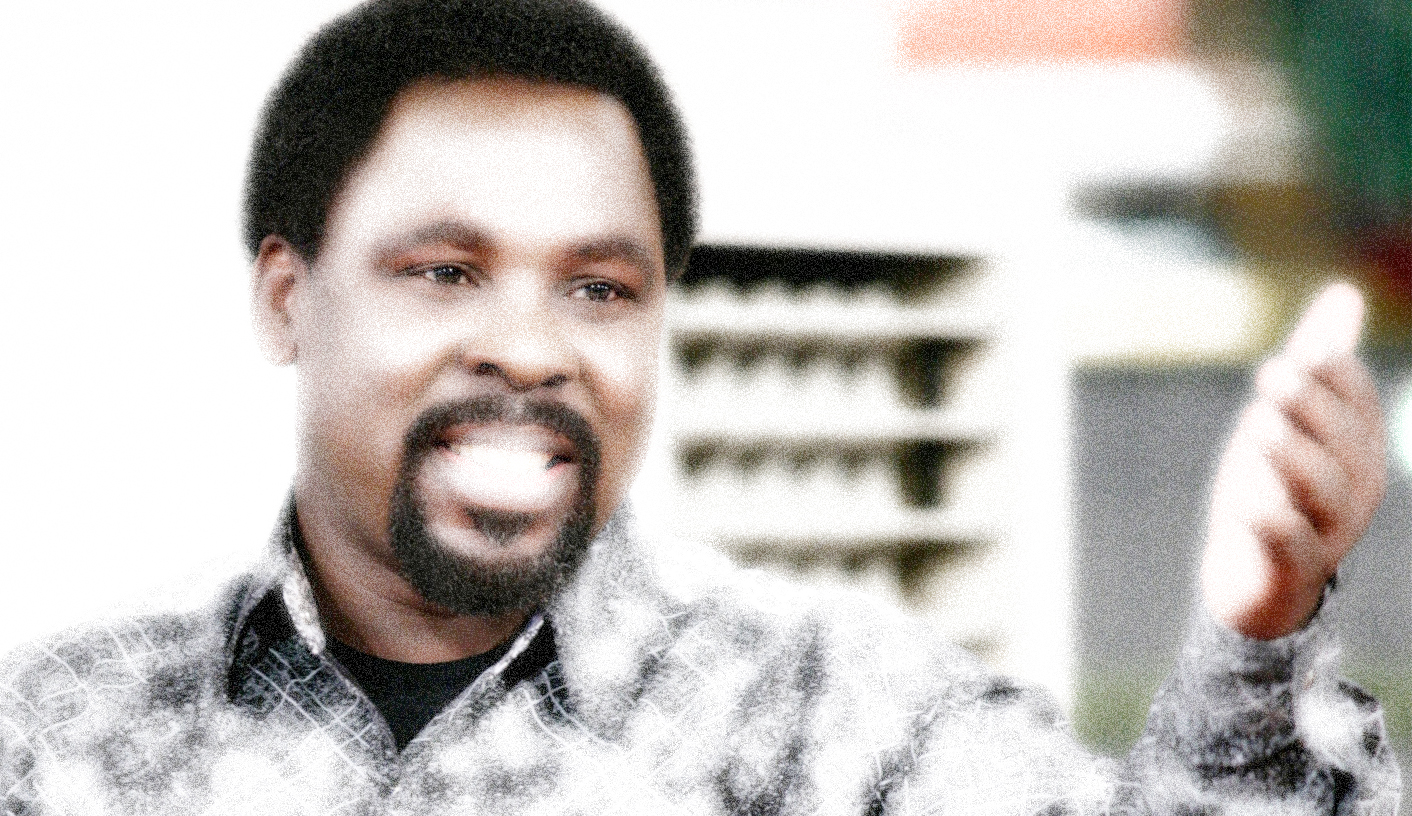 The Prophet T.B. Joshua, of the Synagogue, Church of All Nations, recently released an official press statement explaining the collapse of the guesthouse that killed 84 South Africans. In the Prophets world, where visions abound, this was no mere construction failure, but an attack by nameless aircraft. RICHARD POPLAK looks heavenward for signs.

Therefore this iniquity shall be to you as a breach ready to fall, swelling out in a high wall, whose breaking cometh suddenly at an instant.
—Isaiah 30:13

In these dark days of the Demon Virus, visions abound. So here’s one: by the middle of the century, sub-Saharan Africa will no longer harbour beasts with tusks and horns, but will instead be paved over by concrete and sheltered from the elements by zinc kept in place by bricks. Terminating just south of the tenth parallel, the line of latitude that slices through the continent 700km north of the equator, this New Africa will exist as one enormous mega-structure. Instead of roads and highways and dirt tracks, there will be endless rows of pews and flat screens, and we will travel by drone guided by an unseen hand. In the north, somewhere atop the burbling black gold of the Heglig oil fields, he will wave us into the Kingdom of Christ: Prophet Temitope Balogun Joshua, swathed in a wearable computer, all-seeing and all-knowing, all of us congregants, all of Africa rebranded as his Synagogue, Church of All Nations.

As far as visions go, it’s not much of a stretch. I take my mantic cue from T.B. himself, who casts a wide net, and catches a few big ones here and there. (He predicted Michael Jackson’s death; Michael Jackson died. He predicted a plane’s disappearance; a plane disappeared.) As it happens Synagogue, Church of All Nations, or SCOAN, is already a Sub-Saharan staple. For believers, T.B. is all things to all men. He is a minister, a healer, a humanitarian, a football impresario, an entertainment guru. He whispers God’s word into the ear of Power—Mama Winnie has visited, as has the Commander in Chief of the EFF. T.B.’s spongy, moisturized, perfumed hands touch every aspect of African life, and he shepherds more lambs into his pasture by the day.

Unfortunately, he is a lousy construction manager. On 12 September one of the guesthouses that now proliferate around the site of his Synagogue Church collapsed, killing 84 South African worshippers. The guesthouse tumbled into the Nigerian information abyss—it was days before the news broke in South Africa, and even then the details were patchy. God works in mysterious ways, and that mystery apparently extends into the circumstances of the collapse itself. Was it bad building practices, a theory bolstered by the fact that the guesthouse renovations were not approved by the Lagos State authorities, and looked about as solid as Lego set built by a drunk toddler? Or was it caused by a small plane/jet/UFO allegedly hovering over the site directly before the calamity?

Regardless, the guesthouse was reduced in an instant to a mulch of concrete, dust and humans. The skeptic might ask why a man known for his visionary nous allowed so large a number of his flock to perish so near his church. If he can prophesy the King of Pop’s death in faraway LA, why not the flattening of 84 paying customers in Lagos? In statement he released to the press, and in a sermon on his Emmanuel.tv channel, T.B. has explained the tragedy in no uncertain terms—which is to say that while his terms were uncertain, the details fuzzy, and his explanation muddy, the reasons for the collapse were clear-ish: SCOAN was under fire, probably from invisible lasers.

The church views this tragedy as part of an attack on The Synagogue, Church Of All Nations and in particular, Prophet T.B. Joshua. In due course, God will reveal the perpetrators of this unfortunate tragedy.

The target, then, was Prophet T.B. himself, who narrowly dodged this assault, which was in turn an assault on SCOAN and its congregants. Those who died are not to be considered victims of a construction accident, but are instead something more elevated: martyrs. They died so that the Prophet could live:

The Prophet T.B. has an interesting relationship with language. His Nigerian accented English is not particularly thick, and yet all his sermons on Emmanuel.tv are subtitled in case viewers are unable to understand him. The effect of reading him and listening to him simultaneously tends to cancel out the chaff and leave us with the keywords: God; Kingdom; Heal; Christ; Home. His diction, again by no means typical of Nigerian English, tends to loop back and modify what has come before it, cancelling everything out in a great linguistic hedge. He is not fire and brimstone, because African life is fire and brimstone. He is soft and cuddly—he looks like he’d tickle Satan right out of us.

He is also very rich.

Despite the shakiness of the Prophet’s prophecies, SCOAN’s rise is the future of Africa. North of the tenth parallel, Islam hardens into something more than itself: an all-encompassing hyper-religion ruled by a vicious interpretation of sharia, sucking from the Internet like a vampire at a vein all the fear and rage and anguish of its followers. South of the tenth parallel, the holy rollers keep on rolling. Ostensibly less politically minded than Islam, evangelical Christianity is nonetheless deeply linked to power structures across the continent. (Note how T.B. welcomes ministers and luminaries at the start of his sermons. Note how he hasn’t been thrown in freaking jail after 84 foreign nationals died on one of his church’s properties.) Both religions—if you can call them that any longer—have undergone awakenings over the course of the last several decades. Both have come to define African life. As believers grow up and older and move into the political sphere, it shall come to pass that we’ll all inhabit one endless warring theocracy. Battles with our neighbours will be battles for our souls.

It is good business to have a piece of the action. In Nigeria alone, there are roughly 55 million Pentecostal Christians, a number that grows by about 1.8 percent a year. T.B. Josha’s outfit, as we’ve learned, has no borders. He is able to operate with impunity; those who die on his watch have no recourse; he cannot be touched. According to Eliza Griswold, in her essential The Tenth Parallel: Dispatches From the Fault Line Between Christianity and Islam, there are good reasons for this:

Being a citizen in Nigeria means next to nothing; in many regions, the state offers no electricity, water, or education. Instead, for access to everything from schooling to power lines, many Nigerians turn to religion. Being a Christian or a Muslim, belonging to the local church or mosque, and voting along religious lines has become the way to safeguard seemingly secular rights.

The 67 South Africans that tumbled into the void were already in the void—while nowhere near as dire as Nigeria in terms of development, the majority of South Africans live in open animosity with the government. When the state assassinates workers engaged in a wage dispute with a mining company, the contract between government and people is nullified, and all that remains is the void. It must be filled. In jumps the Prophet.

Once, I would’ve called T.B. a huckster and a fraud and a rat-bastard murderer, but unfortunately you need a baseline of honesty from which to make such a declamation, and where oh where would I find such a thing? All of the “official” agencies digging through the guesthouse’s rubble—the Federal Government of Nigeria, the Government of the Republic of South Africa, Lagos State Government, the National Emergency Management Agency (NEMA), the Lagos State Emergency Management Agency (LASEMA), the Lagos State Ministry of Health—are compromised to one degree or another. The Nigerian state, already locked in a religious war, kills its citizens north of the tenth parallel by the truckload. The Lagos State Ministry of Health is more a Ministry of Death. On the Government of the Republic of South Africa, enough said.

And so the Prophet T.B. Joshua is no more or less dishonest than the institutions he is saving his congregants from. His pulpit stands over the gaps in governance, the holes where our leadership should be. His prophecies are the promise of certainties in places where there are none. His failures to prophesy are due to God’s enduring mystery. Death comes from the sky, via unexplainable aircraft. Die in the street, and you die as a dog. Die in his church, and you die a martyr. “No one knows by the present sign or situation what the future holds,” read his press statement. “We must therefore live each day as if it were our last and leave tomorrow’s trouble for the One who bore our troubles on the cross. We thank God for the martyrs and we pray for the family members and loved ones left behind.”

Soon, we will all live in his Synagogue Church, butting up against the howling minarets of the north, freed from of the shackles of citizenry. And the Prophet, being a real prophet, knows just who to thank. Not God nor his son, but Goodluck Jonathan, Jacob Zuma and others like them, who build for him an endless church, brick by teetering brick. DM