When green hats turn blue: the UN takes over in the Central African Republic 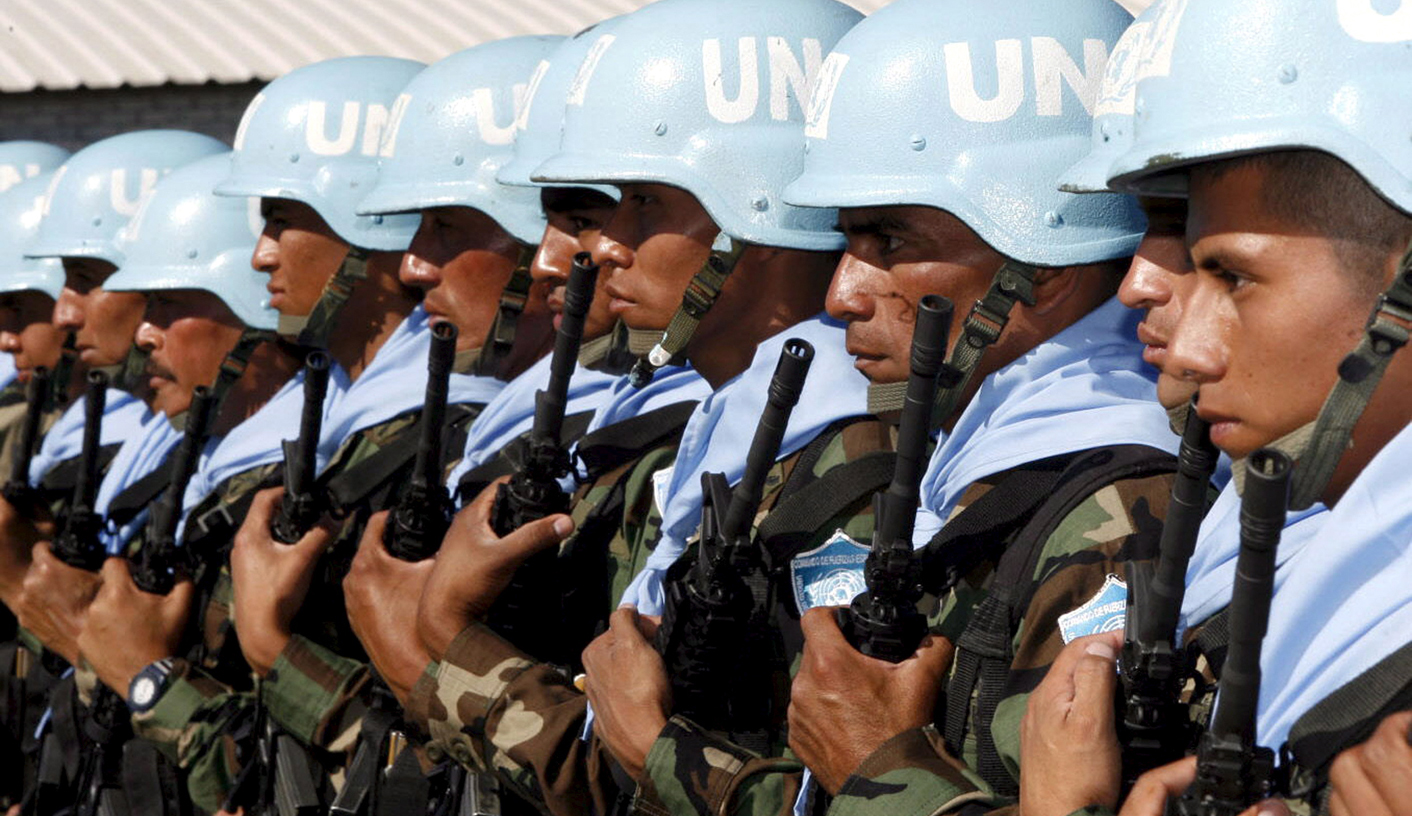 Here’s another one to add to the acronym soup: welcome, Minusca, the UN’s new mission in the Central African Republic – which, at the time of writing, looks suspiciously like the African Union force which came before. Except for those smart blue berets. Can the rebranded peacekeepers make a real difference? By SIMON ALLISON.

Not so long ago, at the height of the conflict in the Central African Republic, there were more than 110,000 people living in temporary shelters at Camp Mpoko. The huge Internally Displaced Persons camp lines the only runway of Bangui’s international airport, and it was once the only safe place in the city.

Things are different now, however. With the influx of continental peacekeepers – and the near-complete evacuation of Muslims from the capital – Bangui and its surrounds are a little safer than they once were. It shows: the population of Camp Mpoko has steadily declined, and is now just 20,000. People are going home, and humanitarian organisations are considering closing the camp altogether.

Also going home are those continental peacekeepers – some of them, anyway. Misca, the African Union peacekeeping force in the CAR, was replaced on Monday by a United Nations mission, to be known as Minusca. The majority of troops, however, will simply be absorbed into the new mission, merely replacing their olive green AU hats and helmets for the UN’s sky blue variety.

In theory, Minusca will deploy 12,000 peacekeepers, including a military and police contingent, as well as a smaller civilian component. It is mandated (as per Security Council resolution 2149) to protect civilians first and foremost, but also to support the political transition; facilitate access for humanitarian aid; and promote human rights, the rule of law, and general disarmament and demobilisation.

It’s a big job, even for a 12,000-strong force, but alas Minusca is far from operating at full capacity. In fact, so far the mission includes just 6,500 soldiers and 1,000 policemen – which is, incidentally, almost the exact size of the Misca force that the new mission is replacing. In other words, besides those new blue helmets, not a lot is changing immediately.

And the CAR desperately needs something to change. The relative calm in Bangui is not representative of the rest of the country, where violence has continued and even increased in the last few months. The frontline of the fighting may have moved a little further north – centred around the town of Bambari – but few areas are really secure. Hundreds of thousands of people remain internally displaced, meanwhile, and more than half of the country’s 4.6 million population requires humanitarian assistance.

“Civilians are being killed by all sides at an alarming rate and people are desperate for protection,” said Lewis Mudge, a researcher for Human Rights Watch. “There is no time to lose. The new UN mission urgently needs to get more troops into eastern and central areas and take bold steps to protect civilians from these brutal attacks.”

Other priorities for Minusca include preparing the ground for elections, originally scheduled for February 2015 but pushed back because of the security situation; and getting stalled peace talks back on track. The latter involves first figuring out who to actually talk to – given the fractured, semi-autonomous nature of both the anti-Balaka militants and the Seleka rebels, this is far from straightforward.

Aside from more troops – if and when they eventually arrive – it’s unclear what impact the transition from Misca to Minusca will have in the CAR. One potential upside is that a greater international presence may diminish the often malign influence of other countries in the region, who played a prominent role in Misca. Chad, for instance, only withdrew its troops from Misca in April this year, despite having played a crucial role in bringing the Seleka rebels to power.

However, it’s hard to be optimistic. Minusca is but the last in a long line of foreign intervention and peacekeeping efforts, none of which have proven to be particularly effective in the past.

“Well, I certainly hope for the best,” said David Smith, director of Okapi Consulting and a long-time observer of the CAR. “But if history teaches us anything, and it should, then Minusca is likely to be as successful as its numerous predecessors. From the time of Misab and Minurca…through Bonuca, Binuca, Fomuc, Fomac, Micopax, Misca and now Minusca we have, to a large extent, many of the same players trying to do the same thing all over again – stabilise the country and prepare the ground for presidential elections. The big problem is that MINUSCA is preparing the ground for, to a large extent, many of the same people who have been looting and pillaging the CAR for decades to take over once again.”

Smith argues that to really make a different, Minusca needs to be able to replace some of this dead wood. “The peacekeeping effort needs drastic surgery that includes a strong and lengthy mandate that help to create a new network of functionaries, politicians and professionals that can start building the institutions any normal country has for running a country and providing the services and infrastructural needs that have yet to be created in this shadow of a state.

“My biggest fear concerning MINUSCA is that once the UN containers are packed up in a year, two years, three years from now, the same people, both inside and outside the country who have benefited from a culture of impunity will be free to carry on as they have been since founding father Barthelemy Boganda was killed in a plane crash in 1959. What will the next peacekeeping mission be called?” DM