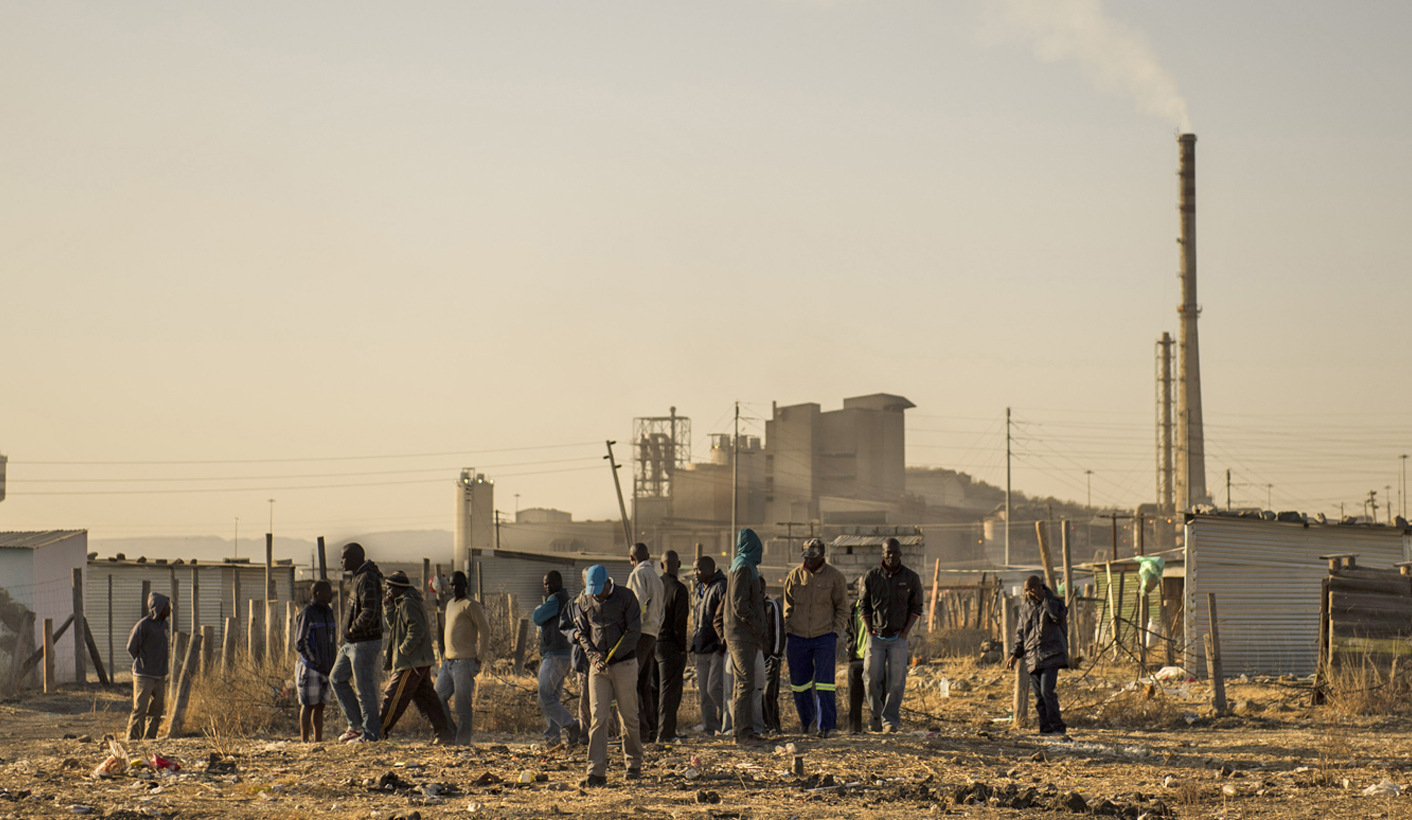 Finally, it is Lonmin’s turn to be publicly scrutinised at the Marikana Commission of Inquiry, writes GREG MARINOVICH. And it’s not a pretty spectacle.

Lonmin is the third largest producer of platinum in the world. A global mining giant. Or at least they should be. To hear the former COO Mohamed Seedat tell of how the company has been operating for the last decade would not make you rush out and buy Lonmin shares, despite their control over a hefty chunk of South Africa’s mineral riches. Seedat has 32 years of experience in mining, and was at BHP Billiton before moving to Lomin as chief operating officer from 2007 to 2010. He took a retrenchment in the wake of the global recession but is still a consultant to the company, and was brought in during 2012 strike.

Last week Friday, Lonmin’s counsel, Advocate Schalk Burger, asked Seedat what would have happened had he invested in the company 10 years ago. Seedat responded that he would have lost 70% of the value of that investment. Similarly, an investment made five years ago would have seen a loss of 80% of the invested sum.

Lonmin is clearly trying to build the case that they are a financially constrained company who deserve our sympathy, rather than the denunciations that have been heaped upon them by people from outside the industry.

Those same facts might lead others to see this as evidence of a poorly run business. In fact, it was this rather widely held opinion that led another mining company Xstrata to make a play to control Lonmin just before the financial crisis hit in September of 2008, buying just under 25% of its shares. Xstrata were critical of Lonmin’s mining operation and dismissive of the London-based management whom they described as complex, enlarged and dissociated from the operation in South Africa.

Xstrata, now part of Swiss-based Glencore, might have fancied themselves as better miners, but did not foresee the financial meltdown of 2008, and are now stuck with vastly devalued Lonmin shares. Seedat says that the price Xstrata paid per share, £33, is now valued at under £3, what with the dilutions of reissuing shares as well as the precipitous drops from the recession and the strikes.

Lonmin, despite its poor performance, is still a major player, with 11 shafts that stretch over 35 kilometres of the North West province’s bushveld. It holds a license to mine huge amounts of platinum and various other costly metals, from chrome and nickel to gold. Yet that license is a little precarious, if the holding company fails to comply with the requirements of that very same license.

One such requirement under the Mining Charter that was introduced after the end of Apartheid is that mining companies have Black Economic Empowerment (BEE) shareholding.

Seedat gave a frank explanation of how this requirement was viewed by Lonmin: “I guess the old saying, ‘tell me how you measure me and I’ll tell you how I will behave’ (applies). If the Charter makes it clear that one of the non-negotiables is (that) you have to maintain your BEE 26% shareholding, so if you are running the risk of that BEE shareholder defaulting on their loan, you will do whatever you can to prevent compromising that BEE structure because if it is compromised you run the risk of losing your mining license and if you then have to repeat that exercise and get a new BEE shareholder and go through the whole exercise again. You’re going to spend hundreds of millions of rand just to establish that structure again.”

For this reason, Lonmin kept paying dividends to enable their black shareholders (Incwala Resources) to ensure they kept up with bank repayments, even as they failed to substantially increase miners’ wages or affect a significant improvement to how those workers lived.

One of the biggest criticisms of Lonmin has been the appalling conditions that their lower/lowest earning employees live in. The Commission had documents before them that 84% of Category 3 to 9 earn R4,336 per month (this was before the pay rise from the latest 2014 strike). This accounts for over 20,000 of Lonmin’s employees. On top of that, those who choose not to live in the hostels receive R1,850 a month as a housing allowance. Workers earning so little will more than likely use a sizable portion of the housing allowance to help feed, clothe and school their families, and that is exactly what every interviewee I have spoken to over the last two years does.

For this reason, they either rent a room in a ‘ma-line’ compound, or erect their own shack on rented land, enabling them to use part of the housing allowance elsewhere. But it is not exactly as if they could incrementally improve their living conditions by spending the full amount of the allowance – as in any mining town, rental accommodation is scarce, and prices are high.

Lonmin has 23,000 full time employees, and also utilises 13,000 contract labourers. Most of Lonmin’s workers live in shacks or company hostels that accommodate four or eight men in a single room, forced to live closer to each other than many married couples. Those hostels are being renovated into decent single and family quarters. Yet this also adds to the burden of those without accommodation as about 7/8 of the hostel denizens will be forced out by the upgrades. This adds to the shack-dwelling community.

As part of their deal with the state, from 2006, Lonmin promised to build 5,500 houses that could be owned or rented by workers. They were due to build about 1,200 per year. They did not. To date they have built three show houses.

There are reasons that Lonmin give for their lack of delivery – the slow pace at which land has been proclaimed for residential areas, lack of water and sewerage, the banks being unwilling to lend to the miners, miners who are not sure of how long they will be employed for being loathe to enter into a long term financial burden.

In a telling account of just how poorly Lonmin has been run, and also of their values, Seedat spoke about the Karee K4 shaft, a long-term project that has yet to yield any income for the mining company, “K4 shaft is a shaft that has been in development I think since around 2000. My guess is Lonmin has probably invested to date around R9 billion in K4 shaft and currently from K4 shaft you are getting zero return… Why? Because K4 shaft needs a little more development. So there is circa R9 billion of capital sitting there, cannot be used and we can’t finish the shaft because we don’t have enough cash available to finish the shaft.”

Seedat went on to say, “And it may not sound politically correct to say this, but if I have a choice between putting money in housing or hostel conversion, I would say rather put that into finishing the shaft because if you finish the shaft, K4 has the potential of employing a further 10,000 people, generating lots of cash which then puts you in a position to do the kind of good things like converting hostels and building houses.”

The Phase 2 Preliminary report for the Commission by Dr Kally Forest spells out that this was not a nice-to-have: “As a condition for the conversion of the old order rights, Lonmin undertook in its social and labour plans that it would convert all of its existing hostel blocks to decent single and family units by 2011 and would, in addition, build 5,500 new houses for its employees over the period 2007 to 2011.”

The report gives some indication of just what living in those shacks is like. “When it rains it is so muddy….there is mud inside [the shack] and mud outside…”

This was particularly bad for those whose shacks had no cement floors: “There is dirty water everywhere…and shit…our children live in filth.”

The lack of roads and drainage systems made the simplest activity difficult. “The clay soil stuck to the soles of shoes so people covered them in plastic bags until reaching the tar road.”

Residents told the researchers, “We don’t need tar roads; gravel roads will do. And we can make them ourselves…” They added that “the mine must work with us, and so must the government.” At times during the rainy season workers carried corpses to the grave as the hired hearse could not access the grave site.

This is not news to anyone who has visited Marikana. The living conditions examined in great detail by the Benchmarks Foundation report came out just before the massacre of 2012.

Judge Ian Farlam quoted Lonmin chairman Roger Phillimore from the 2013 AGM as saying, “Lonmin has a duty to its employees to ensure that they “have access to decent accommodation and the essential utilities for fresh water, proper sanitation and electricity.”

Seedat responded that he absolutely agreed with the duty, and that the obligation was recognised, yet he had to concede that those living in informal settlements do not have “those essential utilities”.

Farlam asked Seedat what Lonmin’s daily turnover was, believing it to be in the range of one million rands worth of platinum a day. Seedat’s answer was “about R50 million a day.”

“50 million if all of the shafts are operating.”

“In turnover, yes, that’s what they produce, the value.”

“And despite that the majority don’t have access to decent accommodation and essential utilities of fresh water, proper sanitation and electricity?”

“I understand, thank you.”

Lonmin had, of course, previously been in an even better position to build housing for their employees prior to the financial crisis, when platinum prices were above $2,200 an ounce (it is now between $1,350 and $1,380). They had two years of great earnings before the financial crisis, yet they merely dabbled in sorting out their workers’ housing.

Yet somehow, in the period following the financial crisis, the Commission has unearthed very large payments made from the South African based mining company to a Lonmin subsidiary based in the Caribbean. These offshore islands have long been used by companies as tax free havens, mostly to the countries they are mine or manufacture in tax revenues.

Mohamed Seedat has not finished his time at the Commission yet, and perhaps this coming week he will be able to explain this to the nation’s satisfaction. DM

Photo: The Lonmin plant looms over the shantytown where Lonmin workers live at Wonderkop, a day after the Marikana massacre, 17 August, 2012. (Greg Marinovich.