Analysis: On journalism in a post-Oscar trial world

Analysis: On journalism in a post-Oscar trial world 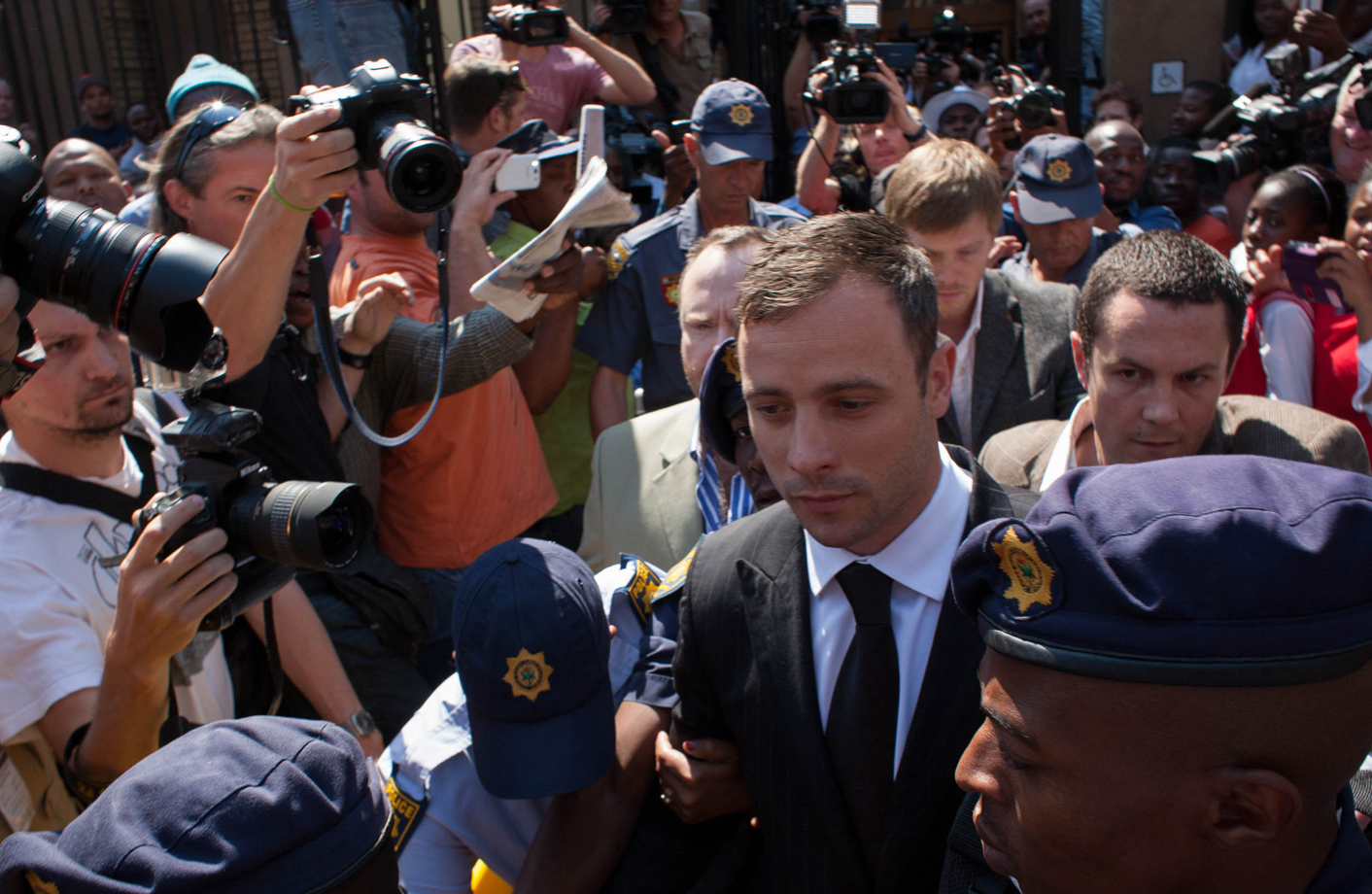 The Oscar Pistorius trial may be over, but there’s a high likelihood of an appeal coming. So long live the Oscar Pistorius trial, long live. Certainly there are plenty of media outlets that would make that call. As a trial it has been more than sensational. Never mind that it’s the world’s first criminal case to get its own television channel, there’s been no shortage of consumers flocking to other channels either. In fact, the trial might in its own way mark a real change in how media works, and what is needed to add value to a news product. It may also be a major step forward on the long road to the democratisation of information, which could have massive implications for people in the media. Let's put it this way: We either add value to the media consumer, or we don't have a reason to exist. By STEPHEN GROOTES.

As someone who works in the media in various ways, shapes and forms, I am technically paid to know something about what’s going on. To try to know before anyone else what has happened, and then to bring that information to various audiences. But in this case I kept bumping into people who were not directly connected with the Pistorius case who appeared to know more than I did. Now don’t get me wrong, I don’t claim for a moment to be a know-it-all. (Really? That’s not what you said in your job application, buddy. – Ed) But I am used to knowing more than people who are not directly  involved or also reporting on public events. And of course I wasn’t reporting on the trial from within the courtroom. The people who were knew far more than just about anyone including possibly some of the people directly involved in it. They worked incredibly hard, and delivered a first-class product under demanding time-constraints to fulfill an almost insatiable hunger.

But the reason non-journalists knew more than myself, who was following it from a distance, was because the trial was broadcast live on television and radio. That allowed everyone to follow it pretty much first-hand. As Judge Thokozile Masipa found out, it also allowed everyone to have an opinion on what transpired, and on her eventual ruling.

To add to the information available, Twitter was continually obsessed with the OP trial. This was partly because of the sheer number of journalists who were live-tweeting it. But it’s also because of the huge international interest. Who can forget my colleague @BarryBateman going from roughly 10,000 Twitter followers in the week before Pistorius killed Reeva Steenkamp, to having over 160,000 after the bail application?

Twitter brought the conversation into the open as well. People like Wits law professor James Grant were adding informed comment on the judgment as it was being handed down. Which meant that anyone on Twitter had direct access to some of the best legal analysis on the subject. Which meant that for probably the first and last time in Twitter’s history, #DolusEventualis came very close to trending.

That, bluntly, means that the role of the journalist in all of this could become diminished. What need is there for a detailed description of the state of Pistorius’ nose and chin when you could see it for yourself, and in glorious high definition? In the past we could easily have argued that we did have a role in providing proper context and expert commentary. But it was on live TV, anyone could see it, everyone knew the context, and the expert commentary was available for free on your Twitter stream.

Twitter is only going to grow. And so is television. For around a decade, Sky News in the UK has started broadcasting a press conference only to then announce that if you want to keep watching it, “press the red button now”, while the main channel switches to other breaking news. As the video and transmission technology improves and gets comparatively cheaper, this multi-channel broadcasting model is only going to expand, massively.

Having said all of that, there are several strategies that do work and are likely to be credible and sustainable for many years to come. Even in a trial as sensational as Pistorius’ was, there is always going to be a genuine need for a comprehensive summary that allows people to know what happened without having to follow it themselves: the people who are interested, but not obsessed with the trial. Or those who can’t follow it as much as they would like. For radio, that’s the forty-second voice report. For the web, it’s those who do the one-A4-page summary in an interesting way that will still find audiences. In a way, this is exactly the function that, say, J Brooks Spector fulfilled when he examined who the Yazidis were and why the ISIS militants hate them so much that they want them wiped off the face of the earth. While anyone could have spent an afternoon on search engines and online encyclopedias, Spector’s account was insightful beyond a one-afternoon search: it was based on lifetime of experience and volumes of materials consumed over many decades that enabled such a story to be contextually perfect and enrich reader’s understanding beyond anything that could be found in a wire- or TV-report.

The other people who find an audience are those who could provide a unique insight. It’s a small number, but people who have been involved in a trial like Pistorius’ before (the OP channel had an exclusive interview with the guy who defended OJ Simpson, for example) could gain some traction.

At the same time, the OP trial did have certain features that made it easier for people to be able to know more than some media practitioners. For a start, it all happened in a relatively short space of time. So long as you were paying attention from the day of the shooting until the verdict, you could claim to know a lot about it. The same does not hold true for economics or politics, where experience and therefore age really counts. What really matters for the day-to-day reporting of those fields is the ability to provide context, to explain why events are happening, and to give pointers as to what could happen next.

And, of course, both these fields are contested, which means that the identity of the person acting as the journalist plays a role as well in gaining them audiences. The experience and contacts of someone like Carol Paton and the back-story and knowledge of Daily Maverick’s own Ranjeni Munusamy, means that people want to know how they view events and what their analysis is of the main forces that shaped the same events.

But for what used to be called “news reporters” or non-specialist people, life is probably going to become much harder. Reporting is an expensive business and, in the cost-cutting obsessed business environment, it will be difficult to maintain fully-fledged teams. And as the social media creeps ever deeper into the breaking news sphere, it will become even more important to develop a beat, or some kind of unique selling point. As always, the more you know, the more value you can add to the reporting, the more likely it is that your product will be consumed.

It also means that news organisations may find they have to, in order to survive, buck the cost-cutting trend and actually invest even more resources on journalists of age and deeper experience, to provide this all-important context that will make their stories unique, and thus attract audiences.

The other direction, of course, is to follow the Fox News model in the US. It started when Rupert Murdoch and his henchman, Robert Ailes, realised that, while the overwhelming majority of the US media is considered liberal and only 5 percent (and none of national networks) is conservative, almost 50 percent of the population describe themselves as conservative. That was a birth of the new model: Fox News would cater for that, until then, mostly silent majority. The rest is history: it attracted large audiences by catering to the chunk of population whose (low) common denominator was living a mostly IQ-free life and, of course, was a fertile ground for advertisers. While great business that is, good journalism it certainly is not. Journalism should make readers more intelligent, not stupider.

Nailing up the masts of fate to such a business model, while certainly tempting in the short-term for the cash hungry operations, could not be a basis for a long-term sustainable business. The only way to survive and thrive in this Internet, post-Oscar trial world, is to become much better, much more knowledgeable, faster and more dedicated to our work. Otherwise, if our readers don’t learn anything from our work, why would they need us? DM

Photo: On Friday, 12 September 2014, Pistorius left court with a heavy police presence and was caught in a throng of media and onlookers. (Greg Nicolson)