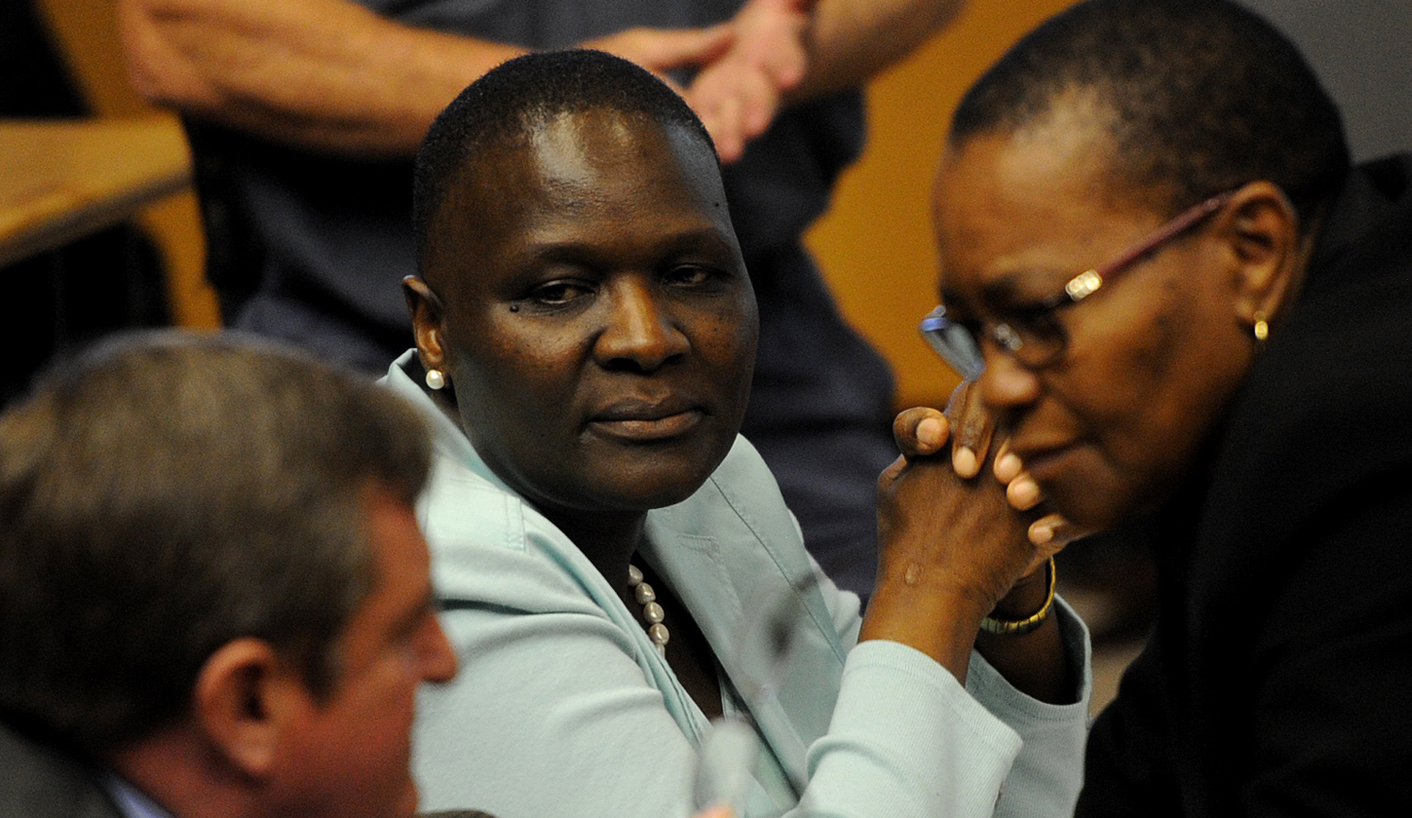 National Police Commissioner Riah Phiyega appeared at the Marikana Commission on Wednesday to clarify questions on how decisions were made from the top. Instead, she further tarnished the SAPS position in the inquiry, painting top officers as uninterested in operational matters and effectively laying the blame at the feet of ground commanders. By GREG NICOLSON.

Riah Phiyega listened to chairman Ian Farlam. “You swear that the further evidence you give to this Commission will be the truth, the whole truth and nothing but the truth?” In a floral skirt, teal blouse and blazer, with matching pearl earrings and necklace, Phiyega agreed.

The national police commissioner appeared in front of the Marikana Commission again on Wednesday for the last time before the inquiry wraps up. As the top cop in August 2012, when 34 mineworkers were killed in a single day and 10 people were killed in the preceding week, Phiyega’s testimony is crucial to the Commission’s goal of pursuing truth and restorative justice. She is ultimately responsible for the police operations. She’s also the link between alleged political influence and SAPS actions.

On Wednesday, however, Phiyega stonewalled Farlam who for most of her appearance quizzed her on issues that either hadn’t been resolved or had come to light since Phiyega’s previous lengthy appearance. To most questions, she simply said she doesn’t remember what happened over two years ago. In her silence, she painted a picture of a leader unwilling to cooperate with the inquiry, senior police officers who failed to perform their duties, and an SAPS that has tried to mislead the Commission.

Farlam wanted to talk about the extraordinary meeting of the police management forum on 15 August when top provincial and national officers discussed Marikana. It was in this meeting when the decision was taken to implement the disperse, disarm and arrest plan the next day, which ultimately led to the massacre. Incredibly, the police didn’t hand over any evidence of the meeting nor mention it when they made their submissions to the Commission. It only came out later.

“You’re now seriously stating we would be in error if we find SAPS didn’t cooperate [with the Commission]?” Farlam put to Phiyega. Only after a third party pointed them towards the meeting did the Commission find out about it. There was nothing untoward, she claimed, and when requested, they admitted the meeting took place. “It certainly appeared to us to be a secret when it came out at a later stage,” said Farlam.

Phiyega agreed the Marikana strike was the most challenging public policing situation during the democratic era, but she could not remember details of the meeting which approved the plan to tackle it. In the hour-long session on 15 August 2012, North West Provincial Commissioner Zukiswa Mbombo made a presentation for 10 to 15 minutes and the SAPS from different provinces also discussed sharing the necessary resources for the operation. Beyond that, Phiyega said she didn’t have a “photographic memory” and could not remember “pedantic details” about what happened in the meeting.

“It’s very important for us to know why the decision was taken to proceed on Thursday morning,” said Farlam. “It’s important for us to find out was exactly was said.” Phiyega didn’t help, but she was clear about what didn’t happen in the meeting. While most of the country’s provincial police commissioners were present, some of whom come from policing backgrounds, Phiyega said no specific details of the plan to confront the mineworkers were discussed before it was approved.

“Are you seriously suggesting that the meeting endorsed the proposal without knowing what the details of the response were?” asked Farlam. Phiyega’s response was that police know how to conduct disarming operations and they’re are essentially the same. She said this despite two officers being hacked to death when a disarming operation went wrong on 13 August. Incredibly, reflecting on the meeting on 15 August, Phiyega could not recall any of the country’s top police officers raising the fear of further bloodshed while they decided to approve the plan.

While shocking, it also seems extremely unlikely given the volatile situation in Marikana at the time and widely publicised problems with policing protests. Yet if Phiyega acknowledged they knew and spoke about the dangers, the next question is, so why did they implement the plan, or why this plan, and why wasn’t greater precaution taken?

Farlam, however, seemed shocked. “The fact that the proposal was endorsed by the meeting, the fact that the people there all agreed to make resources available as required, surely means that they cannot evade responsibility and say, ‘We knew about the plan. Sure go ahead. We’ll make resources available. And if it goes wrong because it’s managed badly or defective planning, that’s nothing to do with us.’ Surely there comes a time when responsibility must rest with those people in that meeting as well.”

He was equally surprised that Phiyega had no recollection of a conversation with SAPS expert witness Cees de Rover about political influence on police decisions at Marikana. “My questions have been straightforward on the issue; the answers have not been,” De Rover said last week, claiming Phiyega was evasive. Farlam said surely she would remember being asked if political pressure played a part in the death of 34 people in a day. Phiyega said she couldn’t remember and refused to engage the chairman’s questions.

Already evasive and difficult, the national police commissioner’s credibility was shot when Farlam brought up the review panel. When Phiyega had appeared at the Commission before, she was asked whether the SAPS had established a review on certain issues related broadly to Marikana and Phiyega said she had not. But when a police hard drive was analysed, it emerged a review panel had been established and Phiyega’s signature was on the call up instructions. No evidence the panel existed was voluntary handed to the Commission by the police despite their commitment to do so with all relevant information at the start of the inquiry.

It is impossible to look at Phiyega’s cross-examination on Wednesday and believe she’s being honest.

While she plays the amnesia card and tries to distance the country’s top officers from the details of the plan to confront the miners, she opens up herself and other officers to allegations of incompetence and dereliction of duty. But by doing so she shifts the greater responsibility to the commanders on the ground who she says the SAPS relied on.

Phiyega is also putting a wall between the police and the politicians who got involved in Marikana. Last week, De Rover, a policing expert who has worked in over 60 countries, said he couldn’t fathom a situation where politicians were not involved.

If there was any doubt that Phiyega was untruthful, Advocate Dali Mpofu showed her the transcript between the SAPS’s Mbombo and Lonmin’s Bernard Mokoena on 14 August 2012. In relation to the police ending the strike, the two speak of Cyril Ramaphosa, Julius Malema, the pair’s relationship in the ANC disciplinary committee, problems with Malema potentially ending the crisis, and nationalisation of the mines. Asked about the political nature of the discussion and whether it is legal for the SAPS to use policing operations to influence party politics, Phiyega responded, “What’s political about this?”

“They could have used different words, but what I hear is people who are interested in ending a protest.”

Let us say it once more: It is impossible to look at Phiyega’s cross-examination on Wednesday and believe she’s being honest. DM

Photo: National police commissioner Riah Phiyega (C) looks on during a break in proceedings at the Farlam Commission of Inquiry on Wednesday, 10 September 2014. Picture: Werner Beukes/SAPA