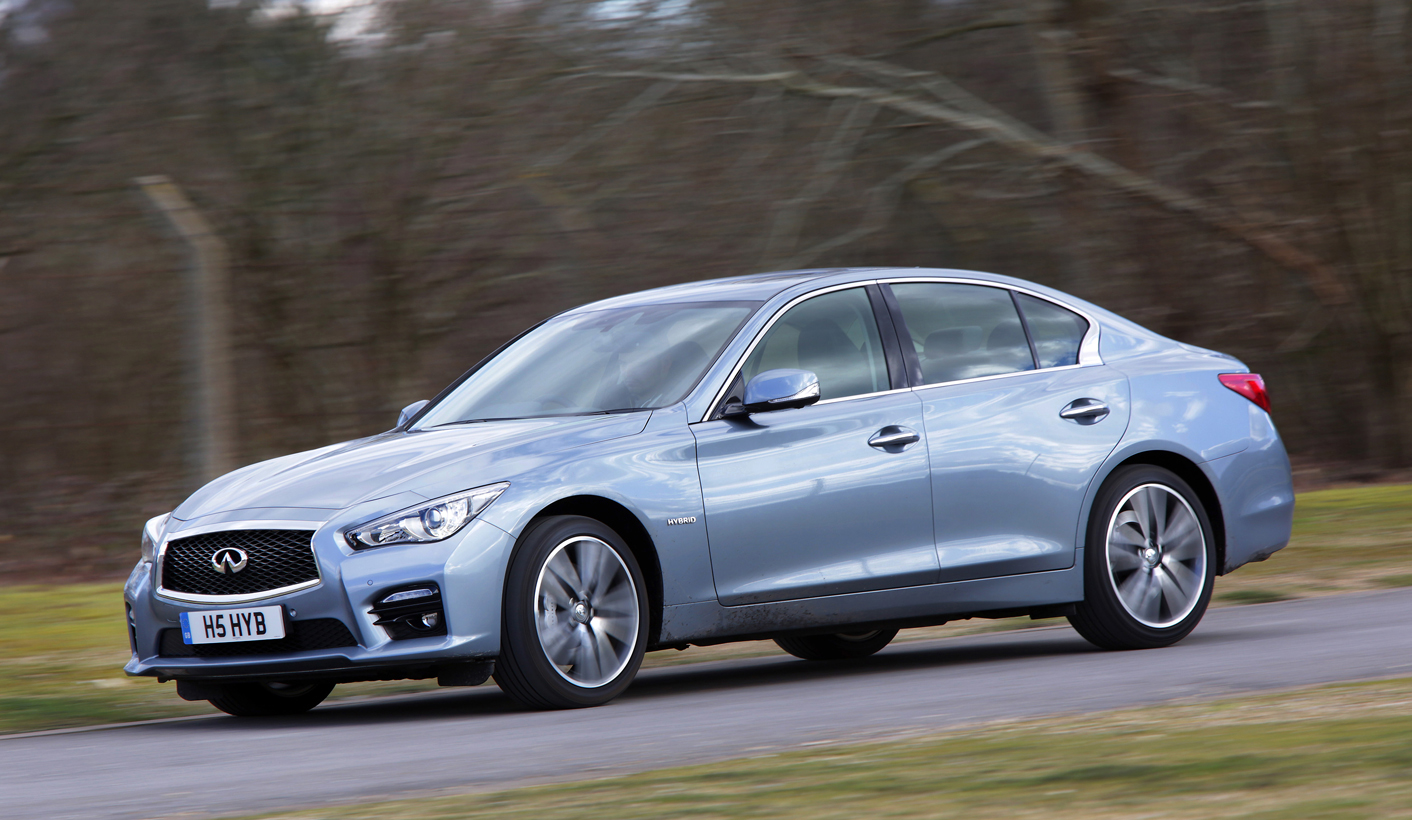 In a car-obsessed country like South Africa, brand recognition is often more important than the actual cars produced under that brand’s banner. Which means that models from unknown marques struggle to attract attention, regardless of how good they are. Infiniti is still establishing its premium brand credentials locally, but the new Q50 compact premium sedan suggests that it has the potential to make the grade – with some provisos. By DEON SCHOEMAN.

The current model line-up comprises a medium sedan, a coupé and a convertible, a crossover, an SUV… and now also the Q50, the marque’s first compact premium sedan. Infiniti here is hoping the Q50 will finally put the brand on the map after a somewhat hesitant entry into the local market.

Compared to mainstream luxury players such as BMW, Mercedes-Benz, Audi and even Lexus, Infiniti is a small (or is that exclusive?) player. The past six months have seen the brand sell an average of only 33 cars monthly.

Admittedly, the Q50 only came on stream in June, and its arrival has certainly increased Infiniti’s sales volumes, but not by a major margin. And therein lies Infiniti’s dilemma: low sales mean an equally low profile brand presence, with brand recognition levels to match.

Infiniti’s struggle for recognition in a highly competitive local car market – and a particularly cut-throat one as far as luxury brands are concerned – is not unique.

Rival marque Lexus, nominally Toyota’s premium brand, faced a similar situation when it arrived in South Africa in 1995. At the time, it was perceived as little more than a fancy Toyota, and sales were slow, at least until the compact and sporty IS arrived, and finally attracted viable sales volumes.

Even then, it was only when Lexus was relaunched as a completely autonomous entity, and built up its own network of very smart and highly visible dealerships, that it cemented its status as a recognised luxury marque.

The Q50 competes with some of the toughest players in the premium segment: the Mercedes-Benz C-class, BMW 3-Series, the Audi A4 – and yes, the Lexus IS. But it’s also Infiniti’s best shot yet at achieving viable sales volumes.

In a country where people like to judge by appearances, the styling of the Q50 is almost as critical as the way it drives. And while it’s a handsome enough sedan, it struggles to project a convincing, individual identity.

The design is clearly upmarket, but the execution is too generic to turn heads. A lack of brand recognition is definitely part of the problem here, despite the bold Infiniti nomenclature.

Even so, there is a lot to like. The silhouette is sleek, with the Q50’s extended nose and bold, convex radiator grille exuding a certain level of aggression, while the shorter rear and profiled haunches suggest some visual muscle.

The unusual rear door, which intersects the C-pillar with a pronounced curve, is an eye-catching design detail, but that apart, nothing here really breaks any new ground. The overall impression is attractive, yes, but the execution is too derivative, and thus too easily dismissed.

One of the Q50’s highlights is the interior. It oozes style and quality, thanks to smart materials, upmarket trimmings and tactile appeal. But perhaps most apparent is the level of high-tech on offer, including two touchscreen displays, truly keyless operation, and extensive personalisation options.

Q50 owners can set up personal profiles that will register settings across 10 function categories for up to four different drivers. These extend from seat and steering wheel position to preferred driving mode, lighting set-up, and activation of the available safety systems.

There’s even a collection of apps, accessed via the touchscreen, which can activate online services such as e-mail and Internet access, or real-time performance such as cornering forces and fuel flow, a la Nissan GT-R.

It’s all very high-tech and says much about the way Infiniti is positioning this car to a well-heeled, smartphone-wielding young executive audience.

The tech spills over into an extended array of active safety features – even though many of those cost extra on the Q50 2.2D Sport tested here. From active cruise control and proximity warnings to lane departure warning and blind spot alerts, the Q50 does more than most to keep its occupants safe and sound.

The space offering is good front and rear, with legroom appearing more generous than all but the new-generation C-class. The boot has a 500-litre capacity, which is also competitive in this segment, and the split rear seatback can be folded down to boost luggage space, even though a narrow aperture, limiting usable space, restricts the load-through section.

The Q50 range is offered with a choice of two petrol engines, and the turbodiesel powerplant in our test car. It’s a 2.2-litre unit, good for 125kW and 400Nm, and is linked to a seven-speed automatic gearbox.

If you want more urge, a two-litre turbo petrol engine will deliver 155kW and 350Nm. And topping out the range is a 3.5-litre V6 petrol, combined with an electric motor in a hybrid configuration. Total power output is an admirable 261kW and 536Nm. There’s even an all-wheel drive option.

But back to the diesel, which on paper should be the sensible – and the most popular – choice, as confirmed by the success of BMW’s 320d. But as it turns out, the engine is one of the car’s biggest disappointments.

It’s not only down on power compared to its closest rivals (the 320d now has 140kW and 400Nm on tap), but it’s unexpectedly short of refinement. The diesel sounds agricultural and thus old fashioned, with a pervasive gruffness that’s out of place in a premium application.

Not only that, but the power delivery is compromised by the kind of turbo lag made virtually obsolete by modern electronics and technology. Once on song, there’s enough urge for effortless cruising, but even tractability isn’t as punchy as that 400Nm shove promises.

Then there’s the seven-speed automatic gearbox, which offers a manual shift mode and steering wheel-mounted shift paddles in line with the car’s ‘Sport’ designation. Again, response is slow by modern standards, even in Sport mode, where you’d expect the shift action to be snappier.

Sport mode, one of four drive modes activated via a drive mode selector on the centre console, should sharpen throttle response, add heft and feedback to the steering, and enhance overall performance.

While the gearshifts are more incisive, they’re simply not quick enough. And the lag remains, despite a more eager throttle response. The other drive modes include standard, snow (for slippery conditions) and personal – the latter a customisable mode that allows individual parameters to be fine-tuned.

One of the more contentious technologies employed by the Q50 is what Infiniti calls its Direct Adaptive Steering system – effectively a steering-by-wire system that electronically links the steering wheel to actuating motors on the steering rack. You can even set the level of feedback and effort to suit personal preference.

I had my misgivings about the system, but in practice it works better than I expected: turn-in is quick and precise, and in the sport setting, there’s ample feel and loads of heft. It’s not as finessed as the best mechanical systems, but it works well, and the adjustability will please some.

The system is a R12 000 option on the Sport, and it’s probably not worth the money in the overall picture, but it provides a fascinating glimpse of the future. It also includes Active Lane Control, which automatically prevents the car from straying from one lane to then next. Together with options such as active cruise control, and blind spot warning, the Q50 achieves a high degree of autonomous operation.

It might be the Diesel Sport, but this Q50 is not going to set any speed records. That dreaded turbo lag means it lacks real enthusiasm off the line, and the gearshifts could be snappier, too. The claimed zero to 100km/h sprint time is 8.5 seconds, but at Reef altitudes, it feels slower. Top speed is 237km/h.

The 2.2D also promises impressive fuel consumption, with a factory figure of just 5.0 litres/100km for the combined cycle, and a CO2 emissions rating of 130g/km.

That may be possible in ideal conditions on open roads, but in traffic, attempts to overcome the lag results in lots of throttle input – with consumption to match. Our real-world figure came to around 7.6 litres/100km, which is still pretty good for a big, luxurious sedan weighing close on 1.8 tons.

The Infiniti Q50 2.2D Sport presents buyers in the compact premium sedan segment with an intriguing alternative to its more conventional compact premium rivals. It’s handsome in a neutral kind of way, but solidly screwed together, and with a decent array of standard kit.

The high-tech stuff will please some, and intimidate others, but the turbodiesel’s lack of refinement won’t win the luxury sedan any friends. The pricing is competitive, though, and those seeking something a little different may just find that the Q50 fits the bill.

For extra money, the hybrid flagship might be a more appealing package, while value-conscious buyers might seek out the 2.0-litre petrol model, which has the potential to be a more involving car.

Either way, the Infiniti deserves more attention from premium segment buyers. And let’s face it – there’s some exclusivity value in a brand that sells in small numbers only. Perhaps it’s that exclusivity Infiniti should focus on – at least until its sales achieve the momentum it is hoping for. DM