In defence of the African Union 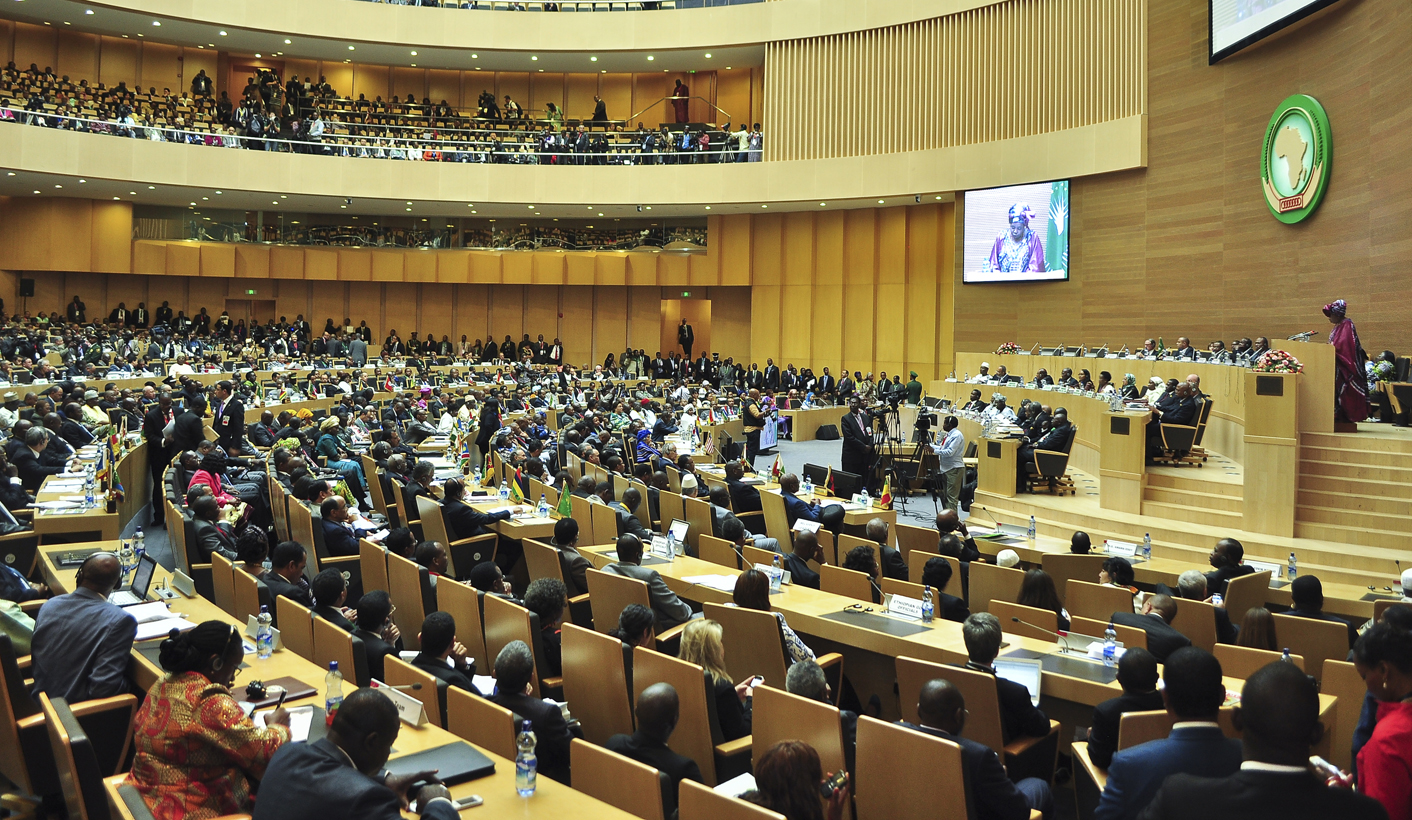 It’s easy to take pot shots at the African Union – and frankly, these can be well-deserved. But it’s a mistake to write the organisation off entirely. In fact, it does plenty to justify its standing as Africa’s only continental institution. For all its faults, Africa is better with the AU than without it. By SIMON ALLISON for ISS TODAY.

The African Union (AU) gets a lot of flak. Critics often argue that it is slow to respond to security threats; that it prioritises power over justice; and that it fails to adequately represent the needs of this continent’s 1,11 billion citizens.

The continental organisation is often dismissed as a talk shop for tyrants, or depicted as an ineffectual, lumbering bureaucracy that worries more about per diems than it does about Africa’s most pressing political problems.

There is merit to some of these critiques. But they don’t tell the whole story, and they leave out the good bits. It is time to give credit where credit is due, and to recognise that – as imperfect as it may be – Africa is in much better shape with the AU than without it.

First we must acknowledge that the AU operates under several massive constraints, which greatly limit the scope of its ability (if not its ambition, so often couched in the lofty rhetoric of pan-Africanism).

Firstly, it faces an immense financial challenge. Africa is the poorest continent, and also the continent most afflicted by violence. Yet the AU’s budget in 2014 is just US$308 million (to put this in perspective, the United Nations’ budget is US$5,2 billion). In the context of the challenges that the AU is supposed to address, this amount is wholly inadequate. Member countries are intended to contribute to the AU, but while countries such as South Africa and Nigeria pay more than their fair share, many struggle to meet their financial commitments. Still more funds must be raised from international partners.

Why does this matter? Because successful interventions – be they medical, humanitarian, military or police – are expensive. For example, the United Nations (UN) estimates that US$600 million is necessary to contain the spread of Ebola (the AU has so far contributed just US$1 million from its humanitarian fund), while there is an US$800 million shortfall in the international fund to prevent famine and relieve suffering in South Sudan.

Peacekeeping is particularly expensive. The latest budget for Monusco, the UN mission in the Democratic Republic of Congo, is US$1,4 billion. It’s all very well to strive for African solutions to African problems, but the truth is that Africa simply can’t afford to address major crises on its own. Nor should it. The developed world, with its long history of interfering in Africa’s affairs, often with disastrous results, must bear some responsibility – and not just when the interests of the major powers are at risk.

Another major constraint is the structure of the institution; essentially a club of member states with no distinction between elected or unelected national leadership. All African countries, with the exception of Morocco, are members – and all have an equal vote. In organisations such as the European Union (EU), by comparison, membership is by invitation only and countries must meet certain economic criteria. This distinction is crucial. The AU is a political organisation first, whereas the EU is premised on economic cooperation. Although often compared, the two organisations are fundamentally different.

Giving all African countries a say, regardless of their political, economic or human rights background, can make it difficult for the AU to execute a progressive mandate. (It should be noted that the AU does take a stand against unconstitutional changes of government, with suspensions handed out recently to Madagascar and Egypt until both had held new elections.) Present at every AU summit are some leaders who do not domestically subscribe to the values of individual human rights, democracy and the rule of law. Nonetheless, one of the true ironies of the AU is how these same leaders are prepared to commit – on paper, at least – to high standards of human rights, democracy and good governance on the continent.

It is in this context, and mindful of these constraints, that the achievements of the AU and its Commission should be assessed – rather than against the rubric of impossible ideals.

Take, for instance, the recent amendment to the protocol on the proposed new African Court on Justice and Human Rights, passed in June at the AU Summit in Malabo. The amendment sparked an outcry from civil society and rights groups, because it gives heads of state and senior government officials immunity from prosecution for serious crimes. Fair enough.

But the outraged headlines failed to mention that there is a lot more to the draft protocol than this amendment – and much of it is ground-breaking stuff. It gives the proposed new court jurisdiction over corruption, money-laundering, human and drug trafficking, and piracy – in addition to war crimes and crimes against humanity. The scope of the court’s ambit is a tacit recognition of the deep links that exist between conflict, corruption, terrorism and other transnational crimes, and gives prosecutors the necessary legal tools to take on these networks as a whole.

African leaders did vote to protect themselves in the African Court protocol, but they also broke new legal ground in adopting a holistic approach to the prosecution of serious crimes. This approach will be vital to the continent’s future counter-terrorism and conflict resolution strategies, when (cynics would say if) the court gets off the ground.

The AU also attracts criticism for not responding fast enough to crises (such as in Côte d’Ivoire, the Central African Republic and Libya), leaving it up to the likes of France to intervene militarily. A general lack of military muscle (and finances) makes such intervention impossible – but this doesn’t stop the AU from assuming important conflict prevention and mediation roles.

“In terms of peace and security issues across Africa, there have been considerable achievements from the African Union, even though there are still challenges,” says Ambassador Olusegun Akinsanya, regional representative for the Institute for Security Studies in Addis Ababa.

Some of these achievements are high-profile, such as the African Union Mission in Somalia (Amisom), which has almost single-handedly stabilised large parts of Somalia in the absence of the UN. (After the Black Hawk Down incident, the UN was just not prepared to engage.) Other efforts go under the radar – such as the recent special meeting in Nairobi of the AU’s Peace and Security Council, where African leaders gathered to adopt a unified counter-terrorism strategy. Threats like terrorism are often transnational in nature, which means responses must be at the regional or continental level. The AU plays a vital role in coordinating these responses.

This coordination role extends to other areas too. It was under the auspices of the AU that African leaders agreed on Agenda 2063, a 50-year roadmap towards a more peaceful, prosperous and integrated Africa; and they approved the common African position on climate change, which ensures that Africa has a unified (and therefore more powerful) voice at international climate talks.

It’s easy to dismiss documents such as Agenda 2063 as fanciful indulgences, but the truth is that when the AU does seek to support specific values, they do eventually frame approaches elsewhere in the continent. One good example of this is on the issue of regional integration, which the AU has strongly encouraged.

This is now starting to bear fruit, with the East African Community leading the way by relaxing work permit restrictions for citizens of member states, allowing freer movement across borders and minimising cross-border tariffs. Another is the adoption of the 2050 African Integrated Maritime Strategy, which encourages governments to adopt a broader – and likely therefore more effective – definition of maritime security, even if it is a bit unwieldy.

Under severe institutional constraints, the AU can’t always take the big decisions or make the grand gestures that we’d like it to. But it puts a lot of effort, much of it effective, into smaller initiatives that yield incremental results, and for this it deserves recognition.

“I believe that Africa is better off with a pan-African organisation like the AU,” says Akinsanya. For all the organisation’s faults, it’s hard to disagree. DM