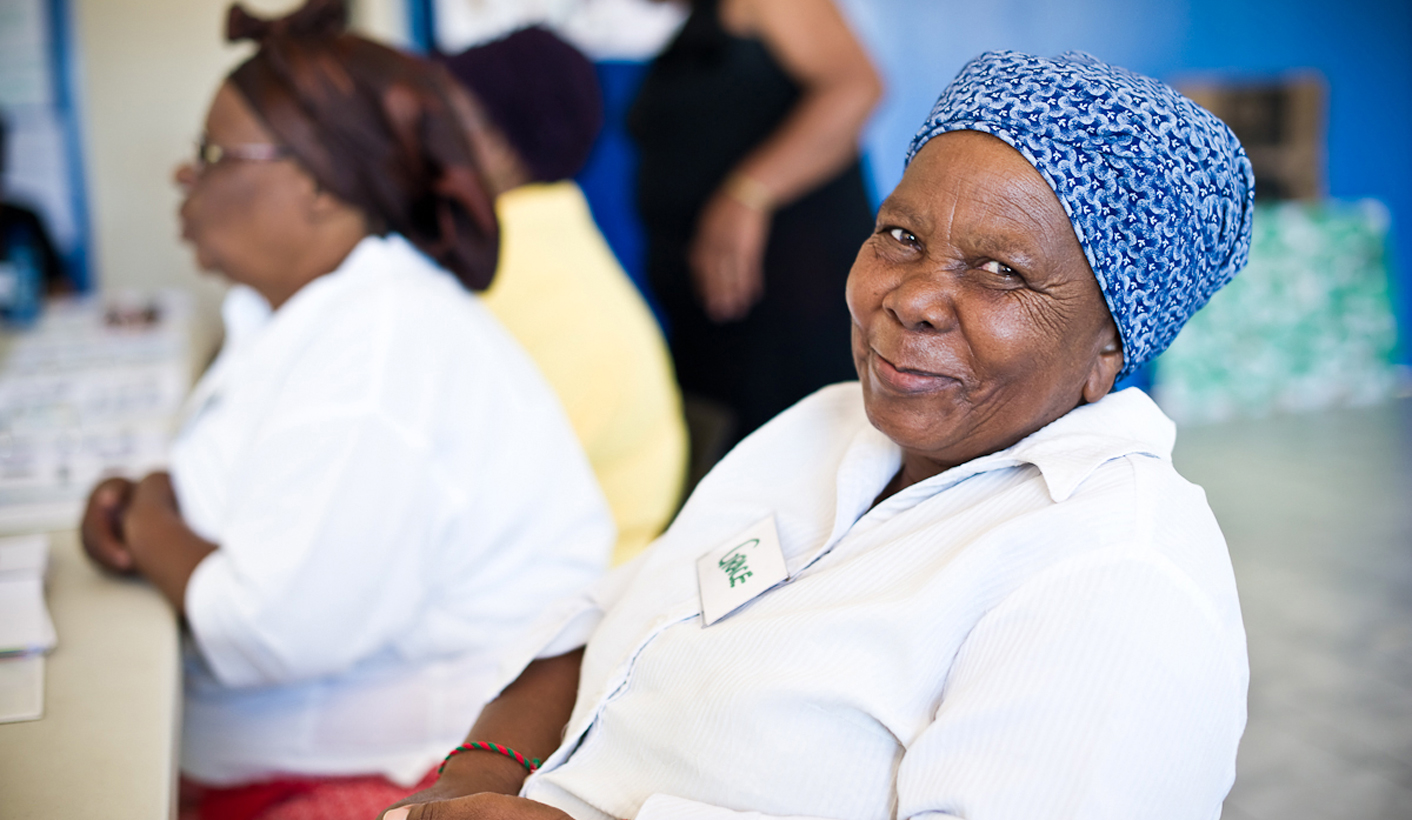 South Africa, like the rest of the world, is facing an age bulge. We’ve got more and more old people, and they need all the same things the rest of us do: care, companionship, and to make ends meet. So what better way to make all this happen than to get seniors taking care of each other, while earning in the process? By MARELISE VAN DER MERWE.

“Since working for AgeWell I am like a child who has just started school. When I wake up in the morning, I feel happy to be working at my age. I learnt a lot from my training on technology. AgeWell knows how to teach older people who are over 60 years. I enjoy my work every day.”

Riorita Mathe is an AgeWell: a fit, able-bodied elderly caregiver in the employ of AgeWell Global, whose job is to go on scheduled visits and check up on the health and wellbeing of other seniors – known as clients – in the AgeWell programme. She and the other AgeWells, of which there are 34 in total, service some 220-plus clients in the Sea Point and Khayelitsha areas, working 20-hour weeks on a schedule they determine on their smartphone dashboards.

Riorita is not the only AgeWell who has benefited from the job opportunity. “I love my job,” says 69-year-old Mandisa Nxala. Gloria Gxabeka, meanwhile, says AgeWell has taught her, “It is never too late to learn about technology while contributing to the community”. Mavis Simayile is learning skills she never thought she would; she only attended school up to Grade 5.

That’s what makes the project successful, explains site co-ordinator and programme advisor, Joy Zhang; it’s beneficial to the givers and the receivers. Zhang, who originally hails from the US, knew something of South Africa’s history before moving to Cape Town in March 2014 to kick off the AgeWell pilot project in Cape Town. Her exposure to local communities, however, was the first time she encountered the remnants of apartheid face-to-face.

“It really struck me,” she says. “There was one moment where one of the AgeWells said to me: ‘People call this our second chance at life, but for many of us, it is our first.’ Many of the AgeWells have not had a formal education or ever had a decent, well-paying job; even a satisfying job. It is really a privilege to witness their first encounter with that.”

Funded by investors in the US, AgeWell South Africa is a pilot project, which, if it is deemed successful when it ends on 31 October, will be introduced in the US. The hope is that funding will be found for it to continue in South Africa as well. The team is operating in faith that donations will come, which will enable the transition to a more permanent organisation.

Unfortunately, however, not many donors focus on older people. “People want return on investment, and if you want that, you tend to focus on babies and children,” says Zhang. “They’re going to grow up and join the workforce and you’ll eventually get back what you put in.”

What, then, is the argument for investing in seniors? Daily Maverick asks. (A tough question, since South Africa has one of the most rapidly aging populations in Africa – and our elderly population is projected to keep increasing quickly over the next two decades, with seniors numbering 5.23 million by 2025.)

But Zhang is clear. There are several reasons, she says. “It’s not just a humanitarian effort. Everybody should be thinking about how to handle the growth of an aging population. Firstly, if you’re a taxpayer, it’s important to reduce healthcare costs, which are disproportionate and unnecessary.

“Essentially, AgeWell is being tested as a referral system so as to take preventive action where necessary, and prevent future drains on limited resources.”

The system is simple. The AgeWells are not a substitute for medical practitioners, nor do they perform cleaning, shopping or other similar services. But they do perform home visits and a set of 20 basic health checks, known as the ‘20/20s’: 20 questions and 20 observations. If the client shows any signs of being at risk of ill health, physical or otherwise, the AgeWell institutes a referral.

In some cases, says Zhang, referrals have been done for social problems as well, for example in a case where a client was concerned that their grandchild was suffering abuse. In that case, a social worker was called in to intervene. It also helps that AgeWell has a number of community partners, including the CPOA, the NOAH Clinic and Ikamva Labantu – this helps AgeWell to cover all bases.

Mostly, however, it’s a question of straightforward health monitoring and companionship, she says, with perhaps the greatest one being social. “One client simply said, ‘I feel safer knowing my AgeWell lives in my community’,” Zhang says. “It’s important to realise that even for people who live with their families, a lot of them don’t have that peer connection.”

But, she adds, for the AgeWells themselves, the training they receive also often puts them at a distinct advantage in their family environment. “In most families, there’s a technology generation gap,” says Zhang. “But the AgeWells use sophisticated technology on their smartphones and are trained to use it. Now suddenly they are using social media and WhatsApp and connecting with the younger generations that way. It’s more inclusive and empowering. And whereas previously the younger generations in their family might have excluded them, now the kids are coming over and saying, ‘Hey, what phone have you got?’”

For the clients, meanwhile, there’s the undeniable advantage of being able to live at home, with dignity, for much longer – and without the unpleasant and painful challenges brought on by living far away from family or not having the financial resources to perform regular medical checks. “Isolation and loneliness are huge risk factors,” says Zhang. “There’s a far higher rate of morbidity and a host of other health risks.” But, she adds, “In their own communities, people do it [take care of each other] so naturally – AgeWell is a natural extension of that behavior, which is inherent.”

The uptake, she says, has been significant, especially in Khayelitsha – and amazingly, struggles in overcoming language and cultural barriers between AgeWells and clients have been minimal. “Sometimes you’ll find it’s even the first time someone is working with someone of another race. Race has very much been a part of the whole experience. People have had to overcome massive barriers. They are learning to use new technology, and then they have to overcome mental barriers too. But they do it. Somehow, they always manage to find common ground.”

The results, meanwhile, speak for themselves. According to the first batch of data collected, the programme is definitely doing some good. More than half of the AgeWell clients enrolled in the programme initially said they did not feel they could count on their friends for companionship, and over 40% said they did not pursue involvement in their community. But preliminary data showed a nearly 50% sustained increase in mean client-reported Well Being Index scores achieved after one month and sustained for four months.

Furthermore, almost 40% of clients triggered a low well-being score at the beginning of the programme. But after a few months, preliminary data analysis indicated that that proportion dropped to just under 10%.

But for those who prefer words to statistics, perhaps the sense of community is best conveyed in the words of a client, who recently sent a letter to the AgeWell offices. “The AgeWells are the healer to the wounds we have in our hearts,” she wrote. “I don’t feel lonely anymore even though I lost my one and only daughter. I wish you all the best, AgeWell, and I also wish that you can go to the Eastern Cape where our lonely relatives and friends stay. We are so grateful to have people like you because when we need help, we know where to go. We wish that you can continue because you make older people happy and stronger.” DM