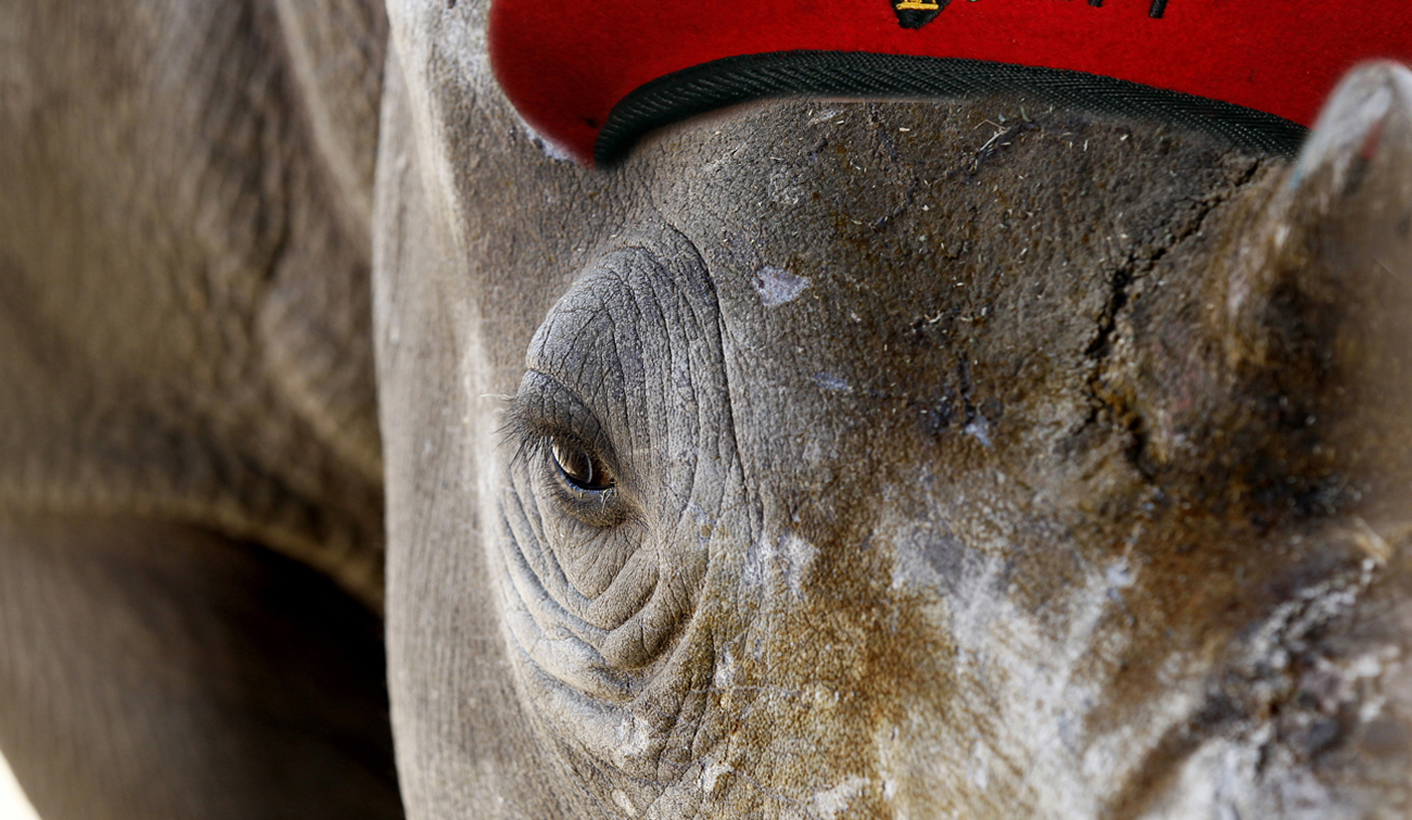 Calm, of a sort, appeared to have returned to Parliament’s National Assembly on Tuesday, following the drama almost a fortnight ago which saw riot police called in to expel members of the Economic Freedom Fighters who refused to leave the House after demanding to know when President Jacob Zuma would pay back the money he owes for Nkandla. Speaker Baleka Mbete confirmed that the matter would be left to Parliament’s Powers and Privileges Committee to resolve, but there was no sign that the Fighters were feeling daunted. By REBECCA DAVIS.

Tuesday was supposed to see an unremarkable plenary sitting of the National Assembly. A debate on the plight of the rhinos was scheduled: surely one issue, at least, that political parties were unlikely to come to blows over. But even before proceedings kicked off, there were subtle reminders of 21 August’s events on the periphery: a smattering of (non-riot) police stationed outside the House; and seemingly stricter regulations than normal governing access to the Press Gallery.

The man who caused all the trouble last time, Commander-in-Chief Julius Malema, was nowhere to be seen. His fellow fighters were there to carry the revolutionary gauntlet, though the hard hats weren’t in appearance.

Speaker of the House Baleka Mbete, with whom the EFF tussled, had been expected to call for the suspension of the party’s MPs at this sitting – though legal expert Pierre de Vos has pointed out that according to Parliamentary rules Mbete only had the power to suspend them immediately, not after the fact.

The EFF had warned that if this were to be the case, they would call for an urgent high court interdict to prevent their suspension. Mbete opted instead to turn the matter over to Parliament’s Powers and Privileges Committee, which met for the first time on Monday and will take five days to deal with the matter, going through video evidence and transcripts.

The committee’s meetings are closed both to the public and the media, but its findings will be made public at the end.

The EFF seems to view Mbete’s decision to leave things to the committee as a vindication, but the Speaker was in a stern mood on Tuesday when she opened proceedings. She could have suspended the MPs immediately, she reminded the House, but had opted for a “lesser sanction”. Despite this lenience, she called the EFF’s shenanigans “unprecedented in the history of this democratic Parliament”, saying that if MPs were dissatisfied with the president’s response to questions, there were “mechanisms” that could be followed.

Apparently seeking to allay concerns that the calling of the riot police was unconstitutional, Mbete said that Parliament “[would] continue to maintain its independence”, and that security had to be called when MPs refused to leave the chamber in “complete and open defiance”.

A situation where rules were not observed, Mbete said, was “tantamount to anarchy”.

She had barely finished speaking before the EFF’s Floyd Shivambu was on his feet demanding the right to reply. Mbete refused, saying that she did not intend her statement to be a matter for response. Shivambu still managed to get out that he objected to her making “these conclusive remarks” about the EFF.

“You are not God,” Shivambu said. “You are a Speaker who must be questioned when you make wrong statements.” The EFF has repeatedly indicated that they have no faith in the Speaker or other Parliament functionaries to maintain a truly neutral line, as opposed to following ANC edicts.

And then the business of the National Assembly resumed its normal dry qualities – but there was no sense that the Freedom Fighters had resolved to keep their heads down. The EFF announced it wanted to debate the effects of genetically modified food; conditions for farmworkers; the question of whether public servants should have to use public services; and a possible link between mining and earthquakes – a matter they mentioned separately twice in the same setting.

EFF spokesman Mbuyiseni Ndlozi also rose on a motion without notice to propose that Zimbabwean President Robert Mugabe should be congratulated on his election as SADC chair, and that South Africa should take cognizance of Mugabe’s statement last week that South Africa’s ability to lead the AU was compromised by its reliance on white capital.

The DA objected that “controversial” matters of this kind could not be raised without notice, and the matter was swept aside.

The DA’s Mmusi Maimane welcomed last week’s Supreme Court of Appeal ruling that the Zuma spy tapes should be released to the DA, saying it was evidence that nobody was above the law. The EFF then said something remarkably similar about the Public Protector, condemning attacks on Thuli Madonsela and saying that her work must be allowed to proceed in order to prove that those in power could be held accountable.

The EFF also accused the ANC of being in thrall to a “cult of personality” where Zuma is concerned, which many will find slightly funny coming from a party often charged with the very same.

But the Speaker was in no mood for any more Zuma-bashing. When a COPE MP rose to quote Zuma as saying that the ANC was “more important than the Constitution”, as he allegedly did in 1996, explaining the ANC’s decision to remove Mosiuoa Lekota as Free State Premier, she attempted to move on to a condemnation of Nkandla but was cut short. The President could not be criticised through this sort of statement, Mbete said: “You must come with a well-researched, substantive offering”.

With Mbete seeking statements from ministers only, EFF spokesman Ndlozi again rose to attempt to speak. “You are not a minister,” Mbete reminded him drily.

And then, finally, matters moved on to the poor rhinos.

There was reasonable consensus among political parties on the basics regarding rhino conservation: that poaching endangers the economy through losses to tourism; that the rhino has both symbolic and conservational significance to South Africa; that communities living around game parks need to be better educated; and that more resources need to be expended bringing poaching kingpins to book as well as the poachers on the ground.

“It’s rhinos today; it could be lions tomorrow,” more than one MP warned.

Lyrical tributes to the species possibly reached their peak when ACDP MP Cheryllyn Dudley referred to baby rhinos as “enchanting, with their soft muzzles” before mercifully running out of time.

But even rhinos, it emerges, provide opportunities for factional fighting. The ACDP’s Dudley claimed credit was due to the party for first drawing attention to the problem. Environmental Affairs Minister Edna Molewa later accused her of being “like a cock crowing and taking credit for the sunrise”.

The DA’s Terri Stander, meanwhile, accused government ministers of “whin[ing] like spoiled children” about the rhino problem without taking proper responsibility. Stander said that gathering and analysing intelligence on rhino poaching was particularly poor. Brandishing a piece of paper, she asked: “Why is it that I can have a list of 72 suspected poachers in my hands, but not one of these have been properly investigated, let alone convicted?”

The ANC’s Jackson Mthembu, acting as sweeper for the debate, got one back in his conclusion: “If Honourable Stander has 72 names of suspects,” he said, “I wonder if she’s not part of the syndicate?”

Yet it was the EFF, as is becoming routine, who staked out the most distinct position on the matter, with Andile Mngxitama saying that part of the problem was that “Europe has eaten all of [Africa’s] animals”.

There was an untenable contradiction between saying ‘save the rhino’ on the one hand, and supporting capitalism on the other, Mngxitama contended. Rhinos have become a commodity and “cannot be protected under an economic system driven by profit and greed”. He condemned the shoot to kill approach to poachers driven by economic need: syndicates, he said, “rely on the desperately poor as their foot soldiers”. The conditions of people living around game parks should be the government’s first priority, Mngxitama said. “The only strategy that will protect the rhino is one that puts people before the rhino”.

And then he seamlessly segued to his conclusion: that the use of public order policing in Parliament undermines the state’s separation of powers and is an attempt to intimidate the EFF.

Photo by Reuters and Daily Maverick.