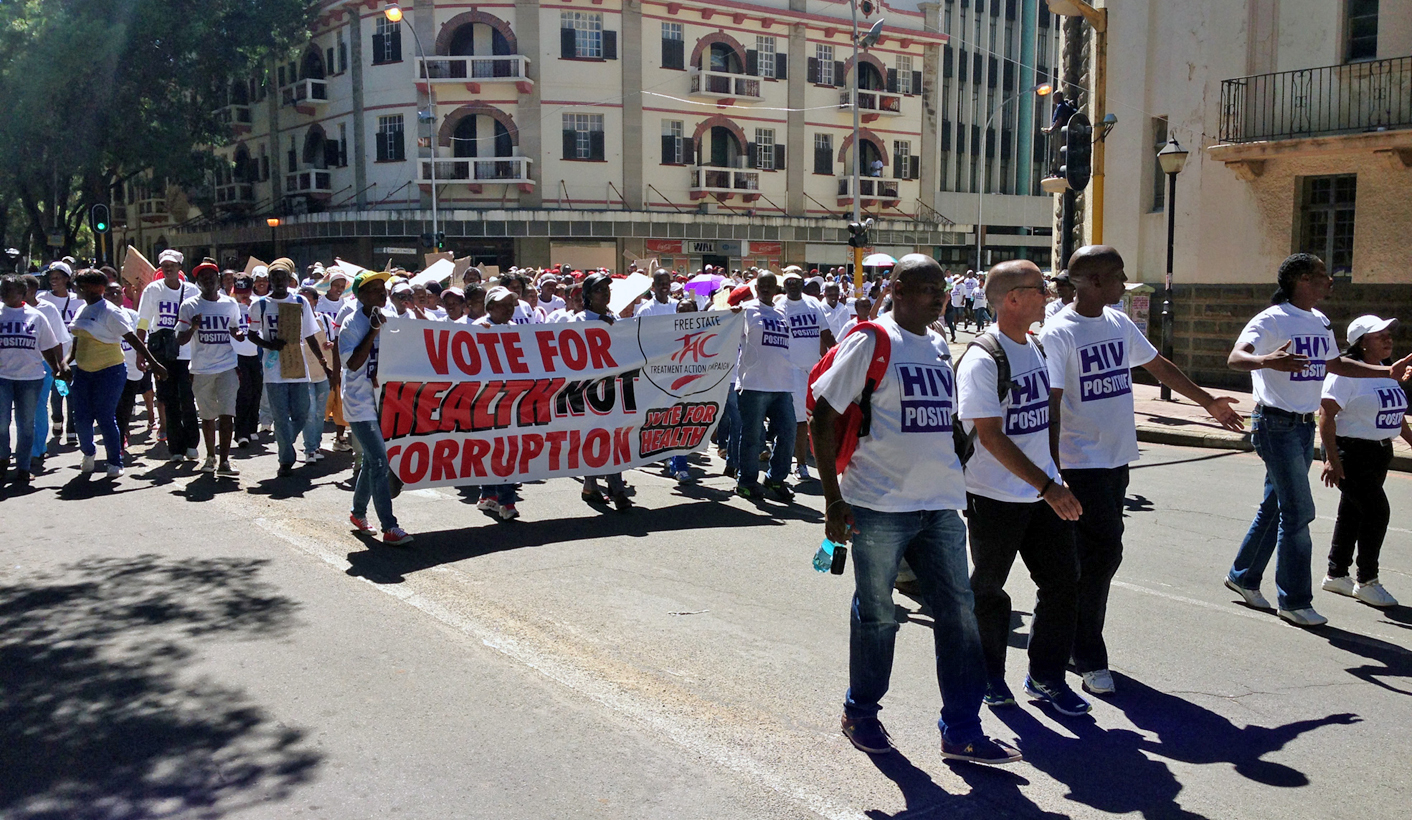 Galvanised by the arrest of 130 community health workers in June, while peacefully protesting their dismissal, activists gathered on Sunday night and Monday morning in Bloemfontein, asserting their right to demonstrate and demanding that the ailing Free State health system be turned around. GREG NICOLSON speaks to the Treatment Action Campaign's General Secretary Anele Yawa for the low-down.

That night 130 activists were arrested while protesting peacefully in Bloemfontein, throwing civil society organisations into immediate action as they were detained for 36 hours, and in the process galvanising support around the campaign to fix the Free State health system.

On Monday, the activists rejected a deal that would have seen the charges dropped. Those charged are community healthcare workers and were campaigning against their dismissal, which is reported to have been due to the department trying to clean the system of ghost workers. Yawa said the Director of Public Prosecutions offered them the chance to plead guilty to “attending a prohibited gathering” and not partake in further demonstrations, and the charges would be dropped.

Who prohibited the gathering? he wondered, suspicious of the wording. Accepting the deal would also mean that if the accused were later charged with the same crime, the dropped charges would be reinstated. Having rejected it, the accused will appear in court on 2 October to get a trial date. Even if they did break the law, said Yawa, it’s sometimes necessary.

The Free State health system has been plagued by problems. In July, the Democratic Alliance’s Patricia Kopane said the party had referred the provincial health department to the SA Human Rights Commission for human rights violations. “The Free State Provincial Department of Health is near total collapse,” said the DA leader. “Public health facilities across the province are struggling with medicine, medical equipment and professional medical staff shortages. Patients in need of surgery are placed on almost indefinite waiting lists. At some facilities, there is no food to feed patients. Reports have also suggested that the provincial health department is an untenable financial hole.”

In 2013, a report from the Stop Stock Outs Project found Free State was the worst province affected by shortages and stock outs of essential medicines. Another review in August found little had changed, with patients in need of life-saving medication being turned away or given lighter doses. The provincial health department’s finances are reported to be in deep debt, with Health Minister Aaron Motsoaledi deploying a team to ensure drug companies are paid and hospitals maintained.

According to Yawa, there are also staffing problems. Instead of bolstering its capabilities, the department dismissed around 300 community healthcare workers and, according to Yawa, did not pay student nurses for eight months. He said those who are employed have poor facilities and poor working conditions.

Crucially, Yawa says, before its disobedience campaign, TAC repeatedly tried to engage with Health MEC Benny Malakoane, but has been denied a meeting, despite promises from the department. In these circumstances, when rights are being violated and government leaders refuse to engage, protest is justified, he said.

Malakoane is accused of being the obstacle to improving the system. Yawa says the first step to fixing the system is for Premier Ace Magashule to fire the MEC. On Monday, the TAC leader filed charges of corruption against the MEC and other senior officials for allegedly forcing doctors to admit a patient, politically connected, into intensive care, even though the patient reportedly couldn’t be saved and took a bed that could have been used by other patients. “Whose life is better?” asked Yawa, saying he laid the charges in the interests of the poor. It is a “gross violation of human rights” for an MEC to intervene and ensure a hospital bed goes to the politically connected, he said.

“Many clinics are still without some essential medicines, surgeries are still being delayed, TB patients are sleeping in cold wards without blankets. While all this suffering is happening on his watch, MEC Malakoane pretends that there is no crisis,” said Yawa in a statement on Monday.

After being appointed in 2013, Malakoane acknowledges the challenges facing the province’s health system, but claims to be making improvements in almost all areas. There’s yet to be a coherent response to the claim he intervened in allocating an ICU bed to a politically connected patient, but the MEC also has other worries. He’s already facing charges of corruption from his time as municipal manager of Matjhabeng Municipality.

“The first step is to get rid of the MEC,” says Yawa. He is waiting to hear back from a meeting TAC had with ANC Secretary General Gwede Mantashe and Motsoaledi last week, and hopes they might help. Meanwhile, the organisation has been galvanised by the recent arrests and is taking action. DM