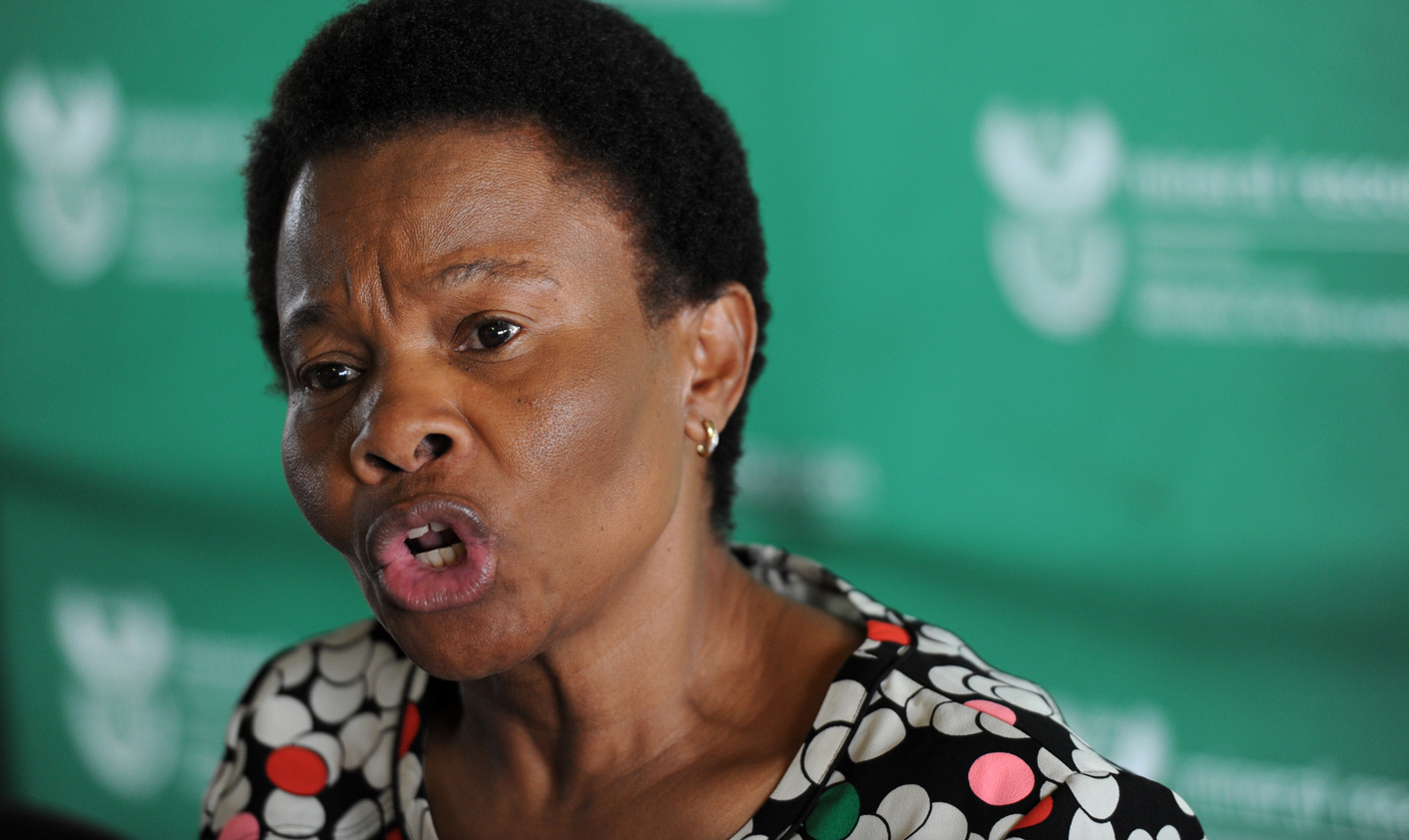 In 2012, Susan Shabangu was Minister of Mineral Resources. Appearing at the Commission on Tuesday, the current Minister of Women was dismal. She was caught in her own contradictions, rarely made sense, and was hostile. Once again the state's actions to end the strike have been shown to be inadequate and an opportunity to avoid the massacre was missed. Shabangu, however, didn't roll on her co-accused and held firm that she didn't do anything illegal. By GREG NICOLSON.

On 21 August 2012, Mineral Resources Minister Susan Shabangu addressed Parliament on what happened at Marikana. She’d been to the area, tasked by President Zuma to discover what happened. “Having spent countless hours either in meetings or consultations with the affected parties, I have come to understand the events that started from a wildcat strike by approximately 3,000 rockdrillers on the 10th of August, a day after we celebrated our National Women’s Day,” she said. “That day is a bittersweet reminder that mothers lost sons, wives lost husbands and the whole nation lost some of the cream of our legendary endeavours underground. We have met with all stakeholders in the industry and it is clear that we will have to work together in tackling the many socio-economic challenges in the mining industry.”

All stakeholders. Shabangu appeared at the Marikana Commission of Inquiry on Tuesday and under cross-examination it was clear that her consultations were in fact limited. Speaking under oath, Shabangu was evasive and contradicted herself and other witnesses.

The minister, whose portfolio shifted after the elections, didn’t meet the most important stakeholders: the workers and AMCU. She told the commission she had met Lonmin, the SAPS, Chamber of Mines, NUM and other affected unions. Pressed, she said AMCU was one of the unions she met. But under cross-examination from evidence leader Kameshni Pillay, she admitted she didn’t meet AMCU or representatives of the striking workers in the days after the massacre.

Why? Shabangu offered a number of reasons. First, she said she’d never heard of AMCU before Marikana and didn’t see it as a stakeholder in what was reported as a strike led by workers’ committees. Chairman Ian Farlam was shocked. Media at the time reported Marikana as a dispute between NUM and AMCU. On 9 August, Shabangu was quoted in an article saying the dispute was between two unions. Furthermore, the 2012 Impala Platinum strike was characterised by the rivalry between AMCU and NUM and early in the Marikana strike the Chamber of Mines suggested the government meet both unions to talk. That she hadn’t heard of AMCU was a lie at worst, a misunderstanding at best.

Then, Shabangu said AMCU wasn’t engaged because it wasn’t the majority union and it was too dangerous to meet the workers in the days after the massacre.

Multiple lawyers asked her why she wouldn’t meet AMCU or workers’ representatives, suggesting she was politically motivated. At a NUM meeting in 2013, she said the union, bleeding members, had to be defended because it’s tied to the ANC. “If you attack workers in South Africa who contributed to the liberation movement of South Africa who are also members of the ANC, we see that as an attack on the ANC,” she said on Tuesday.

Speaking to NUM in 2013, she said, “You are under siege by forces determined to use every trick in the book to remove you from the face of the earth. (They want to make sure) that no progressive trade union will be permitted in the mining sector. It is only those who are wilfully blind who cannot see that the agenda is to defeat and drive the African National Congress from power and reverse the gains of the national democratic revolution.” Shabangu denied she was talking about AMCU and claimed it was Lonmin who was a threat to the NUM because of the history of companies trying to destroy unions, recent Lonmin retrenchments and incidents of racism she said occurred at the platinum company.

Mike van As, representing Lonmin, firmly put it to Shabangu that she was in fact talking about AMCU. Shabangu didn’t mention a Lonmin assault on the NUM in her statement to the Commission nor in her evidence in chief. “I will never, ever, ever see a new union being a rival. It’s always the employer who’s the cause of tension,” Shabangu held firm.

Her views on AMCU are significant in explaining the state’s intervention at Marikana and how it views the mineworkers. For Dali Mpofu, representing the injured and arrested mineworkers, it supports his theory that Lonmin pressured the government through Cyril Ramaphosa, a non-executive director at the company at the time, to use the police to forcefully break the strike so the company would not have to pay rockdrill operators high increases. He argues the motivation for Shabangu and Police Minister Nathi Mthethwa to protect the NUM and in turn the ANC from political opportunists made them push the police into action.

Crucially, Shabangu was quizzed about her discussions with Ramaphosa. Emails between Lonmin leaders and Ramaphosa showed he was determined to convince Shabangu to view the strike as a criminal rather than labour issue. On the morning of 15 August, Shabangu was on radio and said it was a labour dispute. Later that day, it was called a criminal matter. Ramaphosa has admitted it was his intention to get her to change the classification to save lives and he believes he succeeded. Shabangu however said she’s “very independent” and wasn’t influenced by Cyril – she claims she would have made the decision on her own anyway.

Mpofu accused her of lying. “I haven’t lied,” Shabangu responded. Mpofu says the classification was important because if the matter was called criminal, the police could have cracked down and followed “shoot to kill” directives uttered by politicians over recent years. Then the strike would have been over and Lonmin could resume operations without having to pay the increases. “I haven’t committed any criminal act,” Shabangu told him in a cross-examination that saw the two at odds.

During the minister’s appearance, mineworkers in attendance left the Commission. While they may not have believed Shabangu’s comments, they can celebrate the dropping of charges against the almost 300 mineworkers arrested on the day of the massacre, while only charges laid for violence after the 16th remain.

“I feel very happy because we had trouble with the case and had been going back to the courts all the time,” a mineworker who was arrested in 2012, but didn’t want to be named until he appears at the Commission, told Daily Maverick last week. He spent 18 days in jail and experienced brutality, hunger and had his phone taken by police during his incarceration.

For these mineworkers and the relatives of the dead, justice is still elusive. Firstly, the strikers reported widespread brutality and torture when they were arrested. Multiple attempts to contact the Independent Police Investigative Directorate for an update on the torture claims and the investigation into the proportionality of force used on 16 August failed. None of the cops have been arrested, despite reports unarmed and surrendering strikers were killed. The Commission, meanwhile, is caught in a city of legalese and it remains doubtful criminal charges will be recommended in the final report. DM