Libya: The house of cards has collapsed 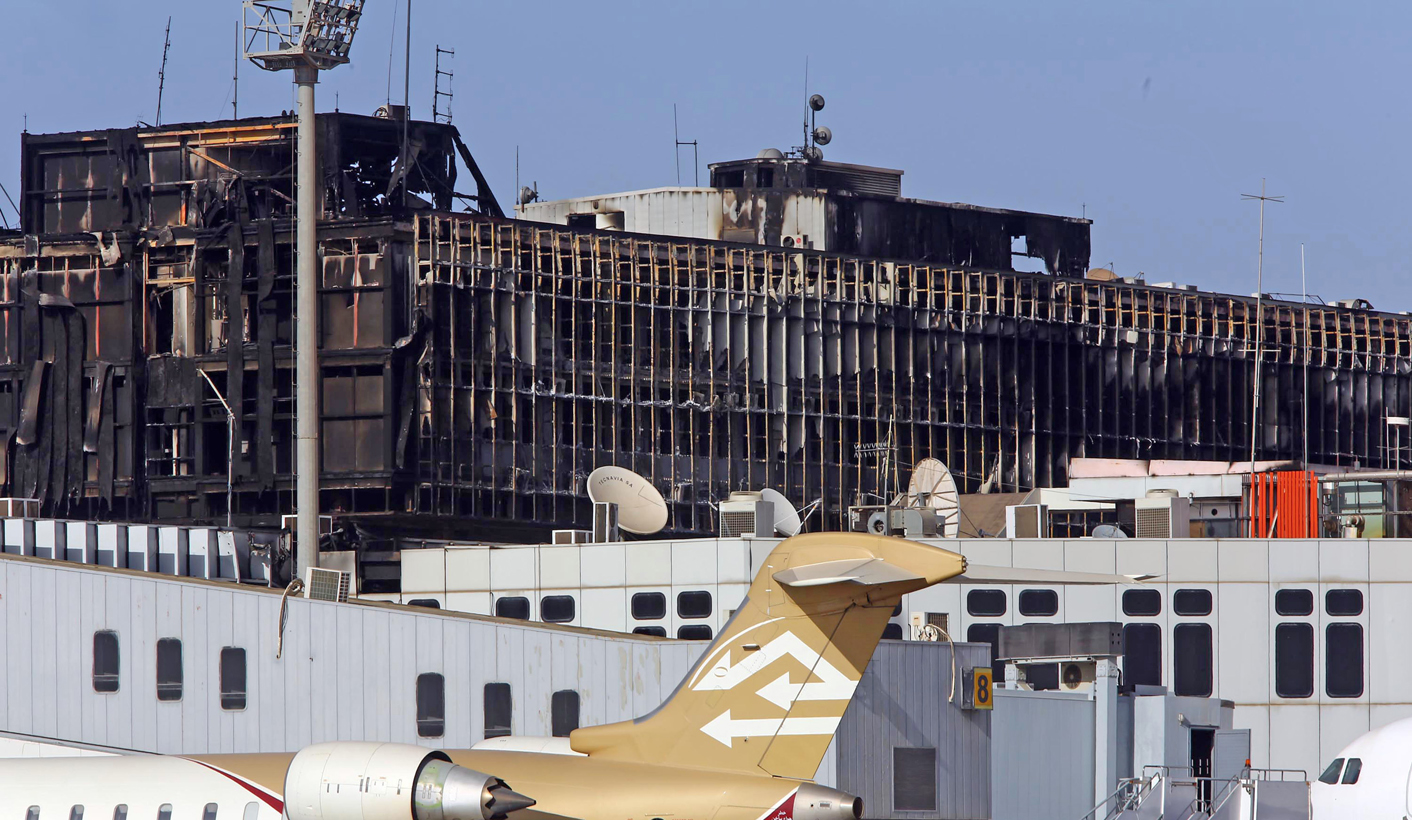 Ever since Gaddafi’s grisly death, Libya has been a state in name alone, held together by a delicate balancing act of rival militias. But even this is now beginning to unravel, with devastating consequences for the country – and, potentially, for the rich Gulf petro-states who are watching these developments with barely-disguised terror. And unfortunately for them, no amount of unilateral airstrikes are likely to help. By SIMON ALLISON.

Every now and then, and this should reassure us, American diplomats demonstrate that they have learned a thing or two from their various military misadventures over the last few decades. Vietnam, Iraq, Afghanistan – maybe it hasn’t all been completely in vain.

“Any kind of intervention or foreign intervention won’t help Libya get out of chaos,” concluded state department spokesperson Jen Psaki at a press conference on Monday. “Libya’s challenges are political, and violence will not resolve them. Our focus is on the political process there. We believe outside interference exacerbates current divisions and undermines Libya’s democratic transition.”

Psaki was echoed by the United Nations’ representative in Libya, who was even less equivocal in his verdict: “Any kind of intervention or foreign intervention won’t help Libya get out of chaos,” said Bernardino Leon, who argued that the only way to end the current instability in Libya was to figure out an inclusive political process in which all Libyans felt represented in the various institutions of state.

Hear, hear. But while the State Department dishes out a rare dose of common sense, other countries are not exhibiting similar restraint. Psaki and Leon’s comments came in response to the news that last week’s air strikes in Libya were launched by the United Arab Emirates, using Egyptian bases as launch pads. Psaki denied that the US had had any prior knowledge of the attacks.

It was an unprecedented unilateral military action from the wealthy little Gulf State – and one that could signal a new phase in the relationship between the western world and its Arab allies.

“On the face of it, this is one of those baffling moments that seem to occur with increasing frequency in the Middle East these days: why has the United Arab Emirates, a small, wealthy Gulf state, been secretly bombing targets in distant Libya from bases in Egypt – and without telling the US, its closest ally? Looked at a little more closely, however, the news reflects wider changes in the region, and a sense that Washington is retreating from it,” wrote Ian Black, the Guardian’s Middle East editor.

“The US, UK and France went to war to overthrow Gaddafi in 2011. But now that the hopes of the Arab spring are a distant memory, they insist that military support for Libya’s warring factions will not help restore desperately needed stability and that only dialogue can succeed. The Emiratis and Egyptians clearly disagree,” Black said.

To understand why they disagree, a little bit of context is necessary. Since Gaddafi’s death, the Libyan government – in its various transitional forms – has been little more than a shell, governing in name alone. Real power is held by various militia groups, many of whom were formed during the revolution and organise along geographic or tribal lines. Others are religious in nature, although even the Islamist movement is fractured between more and less radical elements.

Over the last three years, whatever stability Libya has enjoyed – and it hasn’t been much – has been thanks to the delicate balancing act between these various armed groups. Over the last couple of months, however, that fragile house of cards has begun to crumble.

First came the fight for Tripoli airport between the Zintan and Misrata militias, eventually resulting in its destruction. Then came the loss of the eastern city of Benghazi, cradle of the revolution, to a radical Islamist group with ties to the Islamic State in Iraq and Syria. And then last week came the battle for Tripoli itself, as more moderate Islamists advanced on the capital and the government fled to Tobruk. It was these Islamists that the Emirati airstrikes were supposed to stop. They failed.

And why, you may ask, does the United Arab Emirates care what happens in faraway Libya? It doesn’t – but it, along with Saudi Arabia, does care deeply about the spread of political Islam, which poses an existential threat to these countries’ existence. Saudi and the UAE, despite their professed commitment to Islam, are often viewed as having deviated from the true path, sacrificing their principles for their close relationship with the west and their vast oil wealth. By stemming the spread of Islam – as they did in Egypt by encouraging and then financing Abdul Fatah al-Sisi’s coup and subsequent crackdown against the Muslim Brotherhood – they are pre-emptively protecting themselves.

At least that’s the theory. With the Islamic State entrenching itself in Iraq and Syria, and Libya’s two main cities in the hands of Islamist groups, the tide might be turning against the Gulf’s two richest petro-states. The UAE’s unilateral airstrike, apparently conducted against the advice and without even informing their close allies the Americans, is a sign that the pressure is beginning to tell.

In Libya, meanwhile, that house of cards has well and truly collapsed. Yes, the best solution is indeed a homegrown political process that includes all major stakeholders, as the USA and the UN have called for. It might, however, already be too late for that. DM

Photo: The damaged main building of Tripoli International Airport in Libya, 26 August 2014, after fighters from the Fajr Libya (Libyan Dawn) coalition reportedly captured the airport from Zintan forces. Western countries and North African states called for calm in Libya amid a violent power struggle in parts of the country, and reports that Egypt and the United Arab Emirates had carried out airstrikes on Islamist-allied militias. EPA/STR