Desmond Tutu: On the right side of history, still staring down bullies 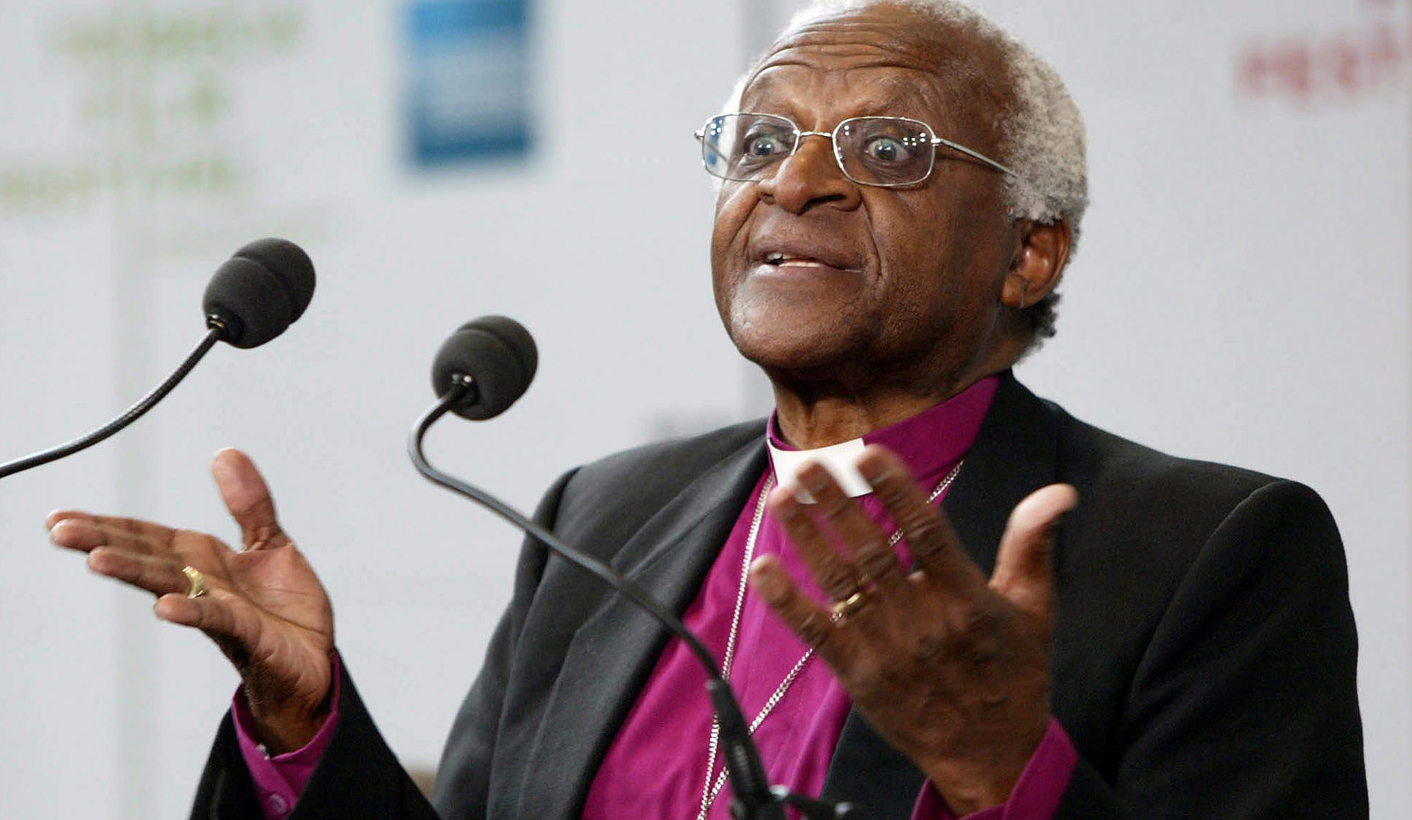 From Vorster to Botha, from Mbeki to Zuma, past and present South African leaders have all had to deal with the blowtorch criticism of Nobel Peace Prize winner and global icon Desmond Tutu. Tutu has been at the frontline of truth, peace and justice in this country for almost four decades. The South African premiere of the first-ever documentary on his life and contribution to democracy will be screened on Sunday, 7 September at Artscape in Cape Town. By MARIANNE THAMM.

The death of Nelson Mandela in December last year left many with the feeling that the moral compass he embodied was lost or buried along with his earthly remains. Somehow the noise, the rallies and the rhetoric that followed immediately after his death and in the ensuing national election in May only served to highlight the perception that there are few authoritative and independent public voices of reason left. The ongoing turbulence and disruption that has become a daily feature of the political landscape has further entrenched this notion.

But there were times during our recent history when the political thunder was far more deadly and ruthless than the present rumbling. In the face of forced removals, mass arrests, detentions and deaths in police custody of anti-Apartheid activists at the height of the civil war in South Africa in the 1980s, Desmond Mpilo Tutu, in his purple Bishop’s Cossack, came to embody the nation’s hope for freedom.

With Nelson Mandela then effectively erased from the physical and political landscape, it was Desmond Tutu (and other church leaders, including, most notably, Allan Boesak) who stepped in to lead the arc of the moral universe towards justice.

From his rousing eulogy at the funeral of Black Consciousness leader Steve Biko – attended by 20,000 people in King Williams Town on September 25, 1977 – to his letters to Prime Minister John Vorster, as well as his tireless international lobbying for economic sanctions against Apartheid South Africa, Tutu was as ubiquitous and uncompromising then as he is today. At 82, he continues to make headlines almost weekly. If he’s not lobbying for End of Life legislation to be revived, he’s pointing out that there are not enough black players in the national rugby squad, leading a chant at a march against the occupation of Palestine or telling BEE fatcats that they are immoral.

So, when you think about it, it is quite astounding that until now, no one has thought to document on film the life of this extraordinary South African, who is as much of a world icon for peace, justice and reconciliation as Nelson Mandela.

Perhaps because he has been so consistent in his criticism, we have simply taken him for granted. Like Table Mountain or the ridges of the Magaliesberg, we somehow believe he will always just be there. Younger South Africans, and particularly those in the ANCYL or in Cosas who have charged that Tutu is “senile”, “out of touch” or “an old man”, would do themselves a huge favour watching Dawn Gifford Engle’s engaging 90-minute documentary, Children of the Light, which will premiere at Artscape in Cape Town on Sunday, 7 September at 6pm.

Watch: Children of the Light trailer

Engle, who worked as a research assistant for US Senator Robert Griffin and later as Chief of Staff for Senator Robert Kasten, is one of the founders of the PeaceJam project, a youth initiative that has seen over 650,000 young people from across the globe participate in projects aimed at improving lives in their countries.

Engle works with her husband, Ivan Suvanjieff (incidentally, they were married by Tutu in 2000). In 2008, PeaceJam’s “Global Call to Action Campaign” was launched together with the Dalai Lama and seven other Nobel Peace Laureates. The campaign hopes to promote one billion acts of service and peace globally by 2018. PeaceJam has made the film available to the Desmond Tutu HIV Foundation in celebration of the 10th anniversary of the organisation.

Watching Engle’s film, one cannot help but be reminded once more of Tutu’s tireless, fearless, uncompromising but always peace-loving attempts at helping South Africans navigate the horrors of Apartheid. The film is simple, featuring a clear narrative of Tutu’s life from his birth in a township near Krugersdorp, his early years – when he first encountered Nelson Mandela in the 1950s when he came to judge a debating contest at the college where Tutu was studying to become a teacher – to his rise as one of the most important voices speaking out against Apartheid from inside South Africa.

Tutu’s life has intersected with an astounding array of extraordinary people, from Bishop Trevor Huddleston, who came to visit him while he was hospitalised for two years with TB, to world leaders including Ronald Reagan.

The film features archival footage of our recent history as well as snippets of some of the more memorable speeches Tutu made throughout the 1980s where he officiated at almost every single mass funeral that took place in the country. These are skillfully edited by Zabe Holloway, who has threaded these throughout the accompanying voice-over lending depth and pace to the narrative. The film steers clear of any religious overtone and focuses on Tutu the man, the moral campaigner, the activist, His Holy Purpleness, who coined the phrase “rainbow nation”.

Those of us who survived those times in that other country, which thankfully no longer exists, will find the film particularly poignant. One is reminded of Tutu’s heartening audacity, the power of his truth and the moral authority of his presence. When the brutalised veered towards violence, it was Tutu who stepped in and saved us from ourselves, always with humility and much-needed humour.

Watching the film I was reminded of Tutu’s extraordinary bravery when, during a mass rally in the 1980s in Cape Town, someone in the crowd shouted out than an “impimpi” (informer) was in our midst. Those were horrifying times when collaborators would be dragged out into the street and “necklaced”. We all watched as Tutu stepped down from the stage to protect the terrified man. I recall that he admonished the crowd for the practice, telling us that if it persisted, he would be forced to leave the country. Tutu was able to calm the crowd and the quivering informer was led to safety.

Those times were unimaginably brutal, and Tutu was always there to wipe the tears, bind the wounds and encourage renewed energy in the face of seemingly unstoppable odds. He led, with others, massive marches for peace, protests onto all-white beaches, the momentum inexorably gathering, although at the time we had no idea that the end destination was actually in sight.

He was there when the unthinkable happened; Nelson Mandela’s release in 1990 and later still to hold and contain us after he was appointed by Mandela to chair the Commission for Truth and Reconciliation in 1995. Apart from hearing the harrowing testimony of thousands of survivors and victims of human rights abuses, Tutu also vociferously took on leaders like former president FW de Klerk and Winnie Mandela for their lapses of judgment.

Engle’s film provides a comprehensive and lucid portrait of a man who is as much of a national treasure as Nelson Mandela, and it is a measure of his greatness that those who are in power today continue to be irked by his fearless criticism. An international reviewer of Children of the Light remarked that the film did in 90 minutes what Mandela: Long Walk to Freedom took two and a half hours to accomplish. It is an astute observation.

Children of the Light records, for those who might be inclined to forget our history, that there were many who were on the right side of it every step of the way. DM

To book for Children of the Light, go to www.computicket.com. Tickets are R250.