Zuma vs. Madonsela, or Zuma vs. The Constitution? 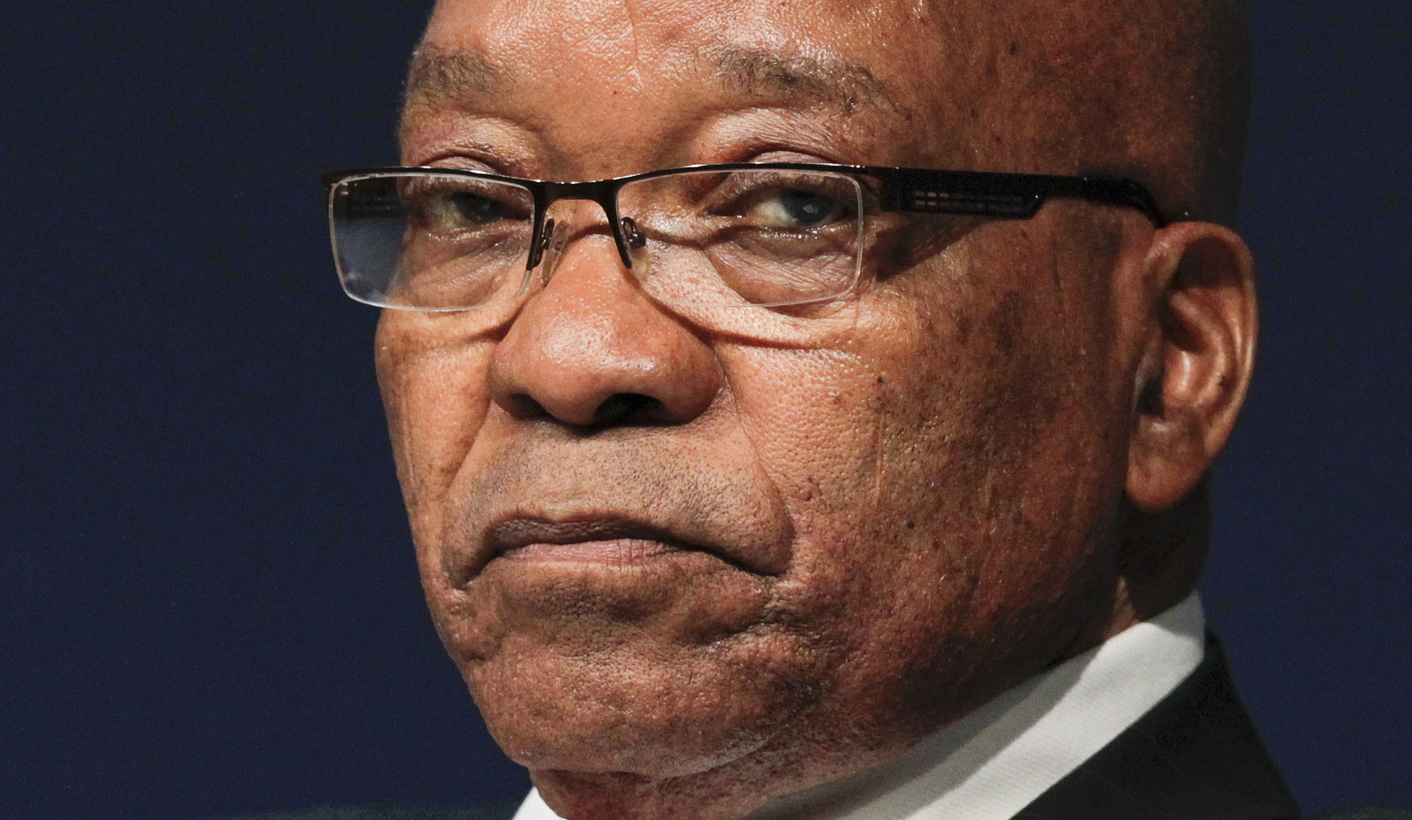 For so long President Jacob Zuma has been the MacDaddy of our politics: unbeaten, unbowed, unrepentant. Now, after a process lasting over a year, we are suddenly at the sharp end of one of the biggest scandals of our adolescent democracy. It’s always seemed that it would be the Public Protector’s investigation into Nkandla that would lead to the most heat, and shed the most light on Zuma’s political personality. It would answer whether Zuma really meant it when he swore to “obey, observe, uphold and maintain the Constitution”. Now we know that Madonsela, the one person who could make a finding on this question, believes he did not. And this is likely to divide our society into two sides: those who support Zuma, and those who do not. By STEPHEN GROOTES.

On Sunday morning both the City Press and the Sunday Times splashed with the same angle on the same story. Public Protector Advocate Thuli Madonsela has written to Zuma and told him, in no uncertain terms, that he has not responded properly to her findings about the government money spent on Nkandla. From almost every objective standpoint, she simply has to be right. If you go through her report, it’s very clear. Zuma and his family benefited improperly from the money spent on Nkandla. And he must make a “reasonable contribution” towards it. Julius Malema puts it more crisply: he must “pay back the money”.

In his response, Zuma merely summarises the findings of the various reports, including that of the Public Protector, and then says that the Police Minister (the newly appointed Nkosinathi Nhleko) must decide whether he’s “liable for any contribution…having regard to the legislation, past practices, culture and findings combined in various reports”.

In other words, somehow the other government reports, all compiled by people appointed by Zuma in some way, shape or form, were suddenly on the same level as that of the Public Protector, and someone he just appointed must now decide whether he must pay back the money, and how much.

This is surely, and was always surely a non-response. Now we know that the person who actually gets to decide whether the response is a legal response or not, Madonsela herself, believes that it does not fulfill her demands.

This is what we now know. But what is going to happen next?

First off, the release of Madonsela’s letter comes just after the EFF was able to use Nkandla to bring the National Assembly to a halt on Thursday. Suddenly Malema can point to Madonsela and say he was right to do what he did, because he was just protecting democracy.

Secondly, all the other political parties are going to jump on the bandwagon and say that this is proof that Zuma does not respect the Constitution. If he did, surely he would have provided a proper response.

At this point, it’s probably worthwhile examining what a proper response would look like. There are many in this country who might think that what was really needed here was for Zuma to simply pay back some money, and, at the same time, admit he was wrong. Even just paying back the money would certainly be an admission that his behaviour was wrong. And if he did it in the correct way, with a certain political flourish, perhaps he could then have been lauded as the President who does follow the Constitution. Certainly the Luthuli House spin machine could have claimed he was like Mandela, and obeyed Chapter Nine institutions when they found against him.

However, as anyone who sat through the Schabir Shaik Trial will tell you, Zuma has a complicated relationship with money. Where would he get it from? These days, leasing out air force runways is harder than it used to be.

At the same time, Zuma is not someone who has apologised easily in the past. Certainly, he issued an apology in person and on live TV after his rape trial. But in office, ‘sorry’ has been one of the hardest words for him to utter.

This means that he has very few avenues open. He has to fight it out, using all the legal avenues that government money will pay for.

It is tempting, for some, to believe that the Nkandla scandal, and the way Zuma is behaving around it, is going to somehow bring his presidency to a premature end. That the ANC is running out of patience, that somehow his enemies within the party will use this to throw him out. That this simply cannot go on for much longer. But that thinking, as rational as it could be, is really not reflecting the reality within the ANC. There is very little evidence to suggest that anything has changed within the party that could make him weaker than he was at the Mangaung Conference just eighteen months ago. Certainly, where it counts, in the National Executive Committee, the one body we know can recall a leader, Zuma’s support doesn’t appear weakened at all. It may even have strengthened considering that one lone critic who was in the habit of being referred to as  “Doctor” has now lost much of his political credibility.

What may be happening within the ANC ranks is that some people might be getting tired of Zuma. Tired of having to justify to friends and relatives, and journalists, why they are defending him. Perhaps even the Luthuli House spin machine is growing weary of doing interview after interview on this, though they did come out with an obligatory fiery statement attacking the Public Protector.

What is most disturbing, really, is that we are now likely to see the country divided between those who support Zuma, and those who stand with the Public Protector. And that means we are going to see the full might of the ANC on the one side, fresh out of an election victory, and probably everyone else on the other. It is a fight that will probably divide the country.

Part of the problem here is that there doesn’t appear to be a mechanism where this could all be settled legally. The Public Protector doesn’t have the power to take the president to court. As UNISA legal academic Professor Shadrack Gutto puts it, should Zuma “fail to respond, then all she can do is go to Parliament and say that we have a president who has failed to do what he should do, and thus we have a president who is trying to behave above the law of the country”. After that, Gutto says it’s all up to Parliament to consider, and that this “would be a ground for the possible recall of the president”.

That’s all good in theory. But it ain’t gonna happen. And we all know it. When it comes to “political solutions”, Zuma always wins.

So then, where does that leave us? Well, Gutto reminds us that there is always public interest litigation. In other words, someone else could take Zuma to court almost as a proxy for Madonsela. A more unholy coalition would be hard to find. Helen finding the money and the lawyers, Julius providing the marchers outside (and possibly Dali Mpofu), Bantu providing the “this is not the ANC I used to know” speech, Ronnie shouting at people who did vote for the ANC, and Pallo just hoping no one asks him any questions. And, of course, there is also the religious community, which seems to be waking up slightly and becoming more politicised, in a way that is unlikely to help Zuma. Already the Anglican Church has led a multi-faith protest about Nkandla outside Parliament. There could be more to come.

At the same time, stand by for a really silly argument about what a “proper response” is. On one level Zuma’s supporters could well claim that if he’s asked when he will pay back the money, his answer could well be “blue”. A question was asked; he answered it. Just because people don’t like the answer, doesn’t mean he can be forced to give a different answer.

This is where the judges are going to be so important. If someone does take this to court, and it is certainly in the political interests of virtually all the opposition parties to do just that, then a judge could well say “blue” is not enough. The answer has to be rational; a proper response to the finding and recommendation that was made here.

But even then, so what? If Zuma decides to just not respond to that, what will happen? We know from experience that when it comes to Zuma, the political tsunami is far stronger than the rule of law. However, it will once and for all answer the question: did Zuma mean it when he promised to “obey, observe, uphold and maintain the Constitution”? And that’s something we’re all dying to know. DM