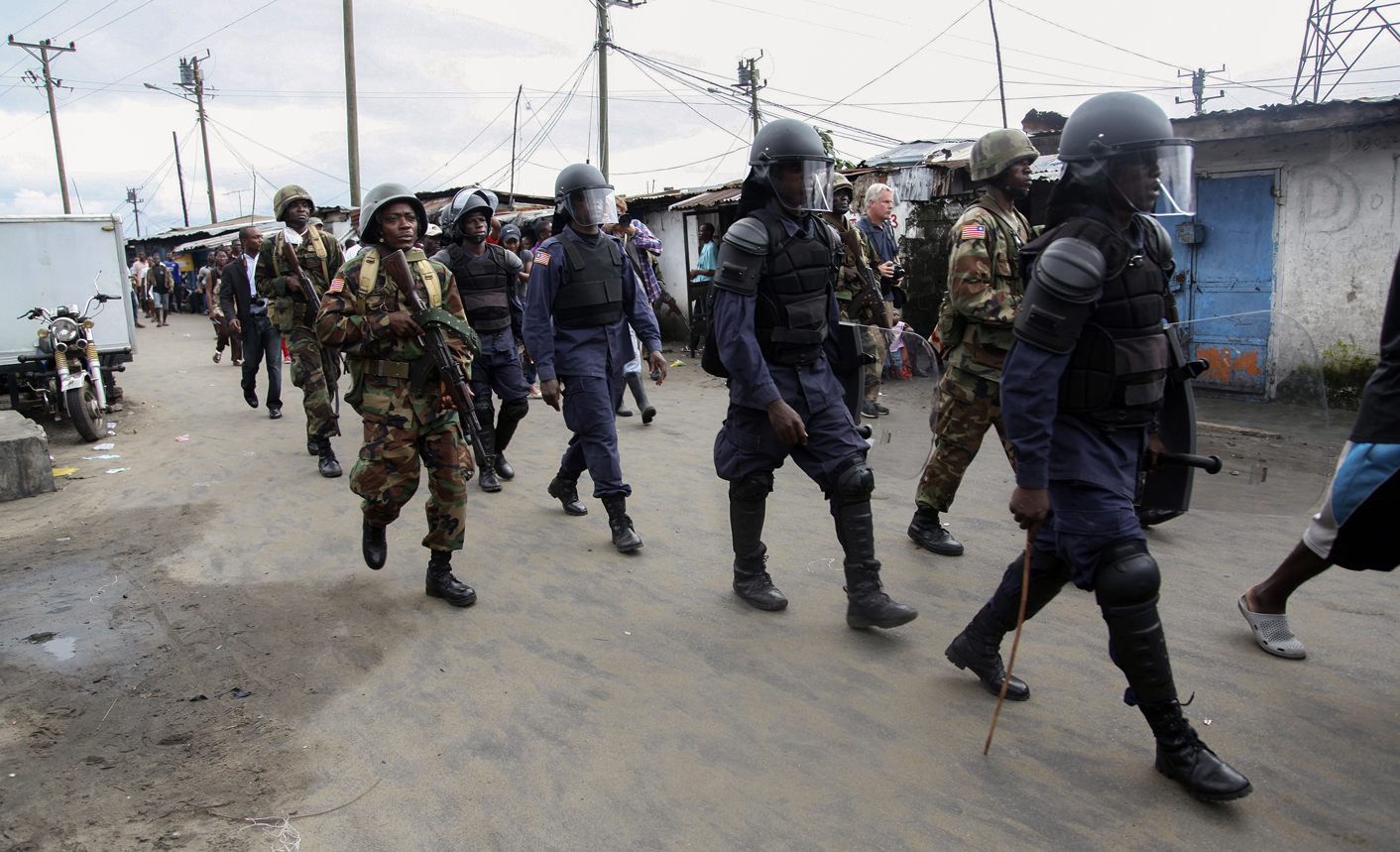 Riot police and soldiers acting on their president's orders used scrap wood and barbed wire to seal off 50,000 people inside their Liberian slum Wednesday, trying to contain the Ebola outbreak that has killed 1,350 people and counting across West Africa. By JONATHAN PAYE-LAYLEH and WADE WILLIAMS for Associated Press.

Hundreds of slum residents clashed with the gunmen, furious at being blamed and isolated by a government that has failed to quickly collect dead bodies from the streets. One 15-year-old boy was injured trying to cross the barbed wire as security forces fired into the air to disperse the crowd.

The World Health Organization said the death toll is rising most quickly in Liberia, which now accounts for at least 576 of the fatalities. At least 2,473 people have been sickened across West Africa, which is now more than the caseloads of all the previous two-dozen Ebola outbreaks combined.

The U.N. health agency also warned of shortages of food, water and other essential supplies in West Africa’s population centers.

And if it’s bad in these capitals, it’s much worse inside West Point, a densely populated slum surrounded by floating sewage that occupies a half-mile (kilometer) long peninsula in Liberia’s seaside capital.

West Point suffers from government neglect even in the best of times, and mistrust of authorities is rampant. Open defecation is a major problem. Drinking water is carted in on wheelbarrows, and people depend on a local market for their food.

Now many of the market’s traders are stuck inside, prices have doubled and “the community is in disarray,” slum resident Richard Kieh said.

“Why are you ill-treating people like this? How can we take this kind of government to be peaceful? It is not fair – We are human,” complained another resident, Mohamed Fahnbulleh.

Ebola is only spread through direct contact with the bodily fluids of sick people experiencing symptoms. Those at greatest risk are doctors and nurses and people who handle the dead. Still, victims often suffer gruesome deaths, bleeding from the eyes, mouth and ears, and the fatality rate of about 50 percent has provoked widespread panic.

West Point has been a flash point. Days earlier, residents ransacked a screening center where people in contact with Ebola victims were being monitored. They dragged out sheets and mattresses covered with blood and feces, accusing the government of bringing sick people into their neighborhood. Dozens of potential carriers were taken elsewhere in the city.

President Ellen Johnson Sirleaf responded by imposing a nighttime curfew and ordering “quarantines” of West Point and Dolo Town, another densely populated slum outside the capital. She also ordered movie theaters, nightclubs and other gathering places shut, stopped ferry service to the peninsula and deployed a coast guard boat to patrol the surrounding waters.

“There will be no movements in and out of those areas,” Sirleaf said in a national address late Tuesday night. “Additional sanctions” were necessary because her citizens failed to heed health warnings, she said.

“We have been unable to control the spread due to continued denials, cultural burying practices, disregard for the advice of health workers and disrespect for the warnings by the government,” she said. “Fellow citizens, these measures are meant to save lives … May God bless us all and save the State.”

She didn’t say how long the blockades would last, or how people trapped inside would get food, water or other help meanwhile.

Police moved in hours after her speech, sealing off the peninsula.

Angry crowds massed, and became violent when a local government representative returned to her home in West Point to get her family out. Hundreds surrounded her house until security forces packed the family into a car, firing into the air and hustling them away.

The outbreak is social problem as well as a public health crisis, the WHO director-general, Dr. Margaret Chan, wrote in Wednesday’s New England Journal of Medicine. “Fear remains the most difficult barrier to overcome,” with people hiding family members suspected of being infected, and people fleeing treatment centers and falling prey to “witchcraft or miracle cures.”

Whole counties and districts have been sealed off in Sierra Leone and Liberia, and Guinea imposed some internal travel restrictions, but the barricading of Liberia’s urban slums are a first.

Some areas already are “beginning to experience supply shortages, including fuel, food, and basic supplies” as airlines and shipping companies curtail services to the affected countries, the agency said. “WHO is working with the U.N. World Food Program to ensure adequate food and supplies, but calls on companies to make business decisions based on scientific evidence.”

The virus is spreading fastest in Liberia and Sierra Leone, but the U.N. health agency reported encouraging signs that it is slowing in Guinea, and there is hope that Nigeria has managed to contain the disease to about a dozen cases.

Nigeria’s health minister, Onyebuchi Chukwu, said Tuesday that a fifth person had died of Ebola, but all of Nigeria’s reported cases have been people in direct contact with a Liberian-American man who arrived already infected. DM

Photo: Liberian security forces deploy in West Point to control protestors, Monrovia, Liberia, 20 August 2014. Residents of West Point protested against government’s decision to quarantine the slum area of West Point in order to contain the spread of Ebola. The quarantine in West Point and a national curfew are the most recent measures imposed by government in the fight to curb the spread. The World Health Organization (WHO) has said the number of deaths from Ebola has risen to 1,229 in West Africa. EPA/AHMED JALLANZO