Eye of the storm: Hlaudi slips through the tangled web – for now 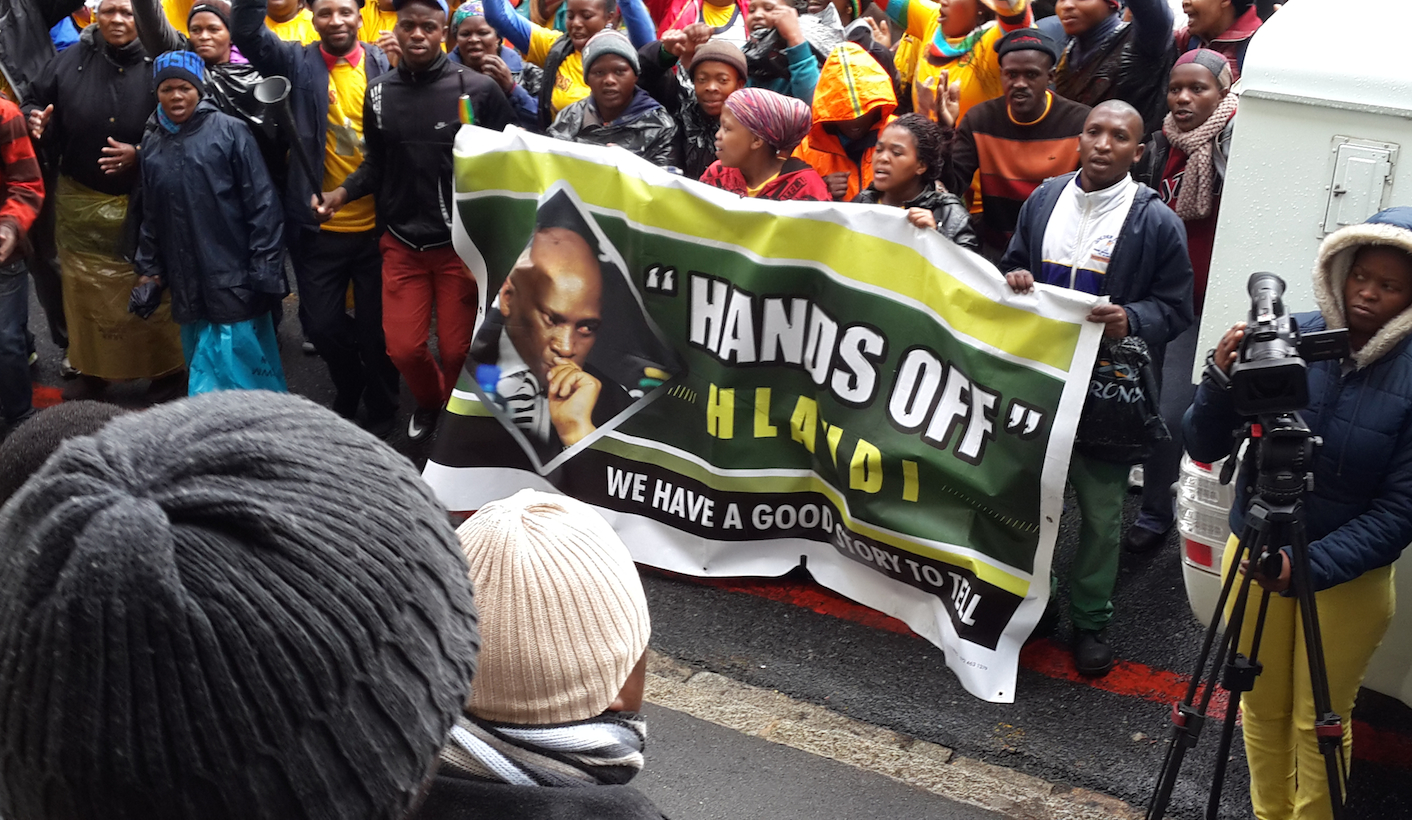 While the Western Cape High court was hearing an application initiated by the DA for an urgent interdict to have SABC COO Hlaudi Motsoeneng’s permanent appointment set aside and for him to be suspended immediately, the Public Protector and the Communications Minister met in Pretoria and agreed to co-operate on the matter. So where does that leave the DA? Or Hlaudi? Or the SABC, for that matter? By MARIANNE THAMM.

More or less the same time Public Protector Thuli Madonsela and Communications Minister Faith Muthambi were meeting in Pretoria yesterday, Madonsela’s legal representative, Etienne Labuschagne, argued in the Cape High Court that the remedial action she had set out in her February report in relation to SABC COO Hlaudi Motsoeneng was binding.

That legal representatives acting for some of the nine respondents (and in particular Norman Arendse acting for Motsoeneng) in the case brought by the Democratic Alliance in the Cape High Court this week had “glossed” over these recommendations – regarding them instead as mere “proposals” – Labuschagne said, “sounded the death knell for the effectiveness of the office of the Public Protector”.

Labuschagne told Justice Ashwin Schippers that organs of state had recently embarked on a variety of strategies to avert compliance with remedial action directed in reports.

The Public Protector’s powers, he added, were derived in the Constitution and the office acted as an independent body serving in the public interest to curb the abuse of power and maladministration.

“The single most powerful weapon in the hands of the Public Protector and that strengthens our democracy is this power to take remedial action. It places it on a different footing to other Chapter Nine institutions.”

In July this year, it appears, then, as if the newly appointed Minister Muthambi, the SABC and the Board completely ignored Madonsela’s recommended remedial action when they permanently appointed Motsoeneng as COO five months after her February report.

In the report, titled “When Governance and Ethics Fail”, Madonsela stated that Motsoeneng’s appointment as Acting COO had been irregular and that the SABC board had to take “appropriate disciplinary action against Motsoeneng for his dishonesty relating to the misrepresentation of his qualifications, abuse of power and improper conduct in the appointment and salary increments of Ms Sully Motsweni and for his role in purging of senior staff members resulting in numerous labour disputes and settlement awards against the SABC.”

She also recommended that a new COO be appointed to the SABC within 90 days.

In July, after Motsoeneng’s permanent appointment by the Minister, Madonsela announced that she would launch a new investigation into the appointment and the process followed.

Make no mistake, the meeting between the Minister and the Public Protector in Pretoria yesterday was by no means a voluntary encounter. Madonsela subpoenaed the Minister so she could not but comply.

Whether yesterday’s agreement will affect the findings that will be made by Judge Schippers (which were on Wednesday postponed to a later date) is unclear at this stage. But it is highly likely that he will have to take into account the PP and the Minister’s undertaking to “work in the spirit of co-operative governance in line with the provisions of chapter three of the Constitution”.

“They acknowledged the fact that the matter under investigation is also under judicial scrutiny in the Western Cape Division of the high court,” Madonsela and Muthambi said in a joint statement.

What this might mean for the DA is that the case is dismissed by the court as being “premature” in light of the Minister’s willingness to engage with the Public Protector on her findings.

Would the Communications Minister have agreed to the meeting with the PP had the DA not mounted the court challenge? Difficult to tell. What is clear is that Hlaudi is still in the eye of a legal storm, with clouds mounting on all fronts. Meanwhile he can safely leave a wet and cold Cape Town and head back to his office at Auckland Park and his job as the de facto most powerful individual at the public broadcaster – for now.

In court yesterday Labuschagne, for Madonsela, told Judge Schippers that an organ of the state against which the Public Protector had issued a direct order could opt for three courses of action. It could comply, declare an intergovernmental dispute or, if it disagreed completely, declare a dispute “and start talking about it. Not just ignore it”.

“This does not mean that the remedial action is suddenly no longer binding, it remains binding during the constructive engagement. This is in line with Constitutional objectives,” he said.

The Communications Minister’s advocate, Vincent Maneka SC, provided some insight in to her thinking during his address to the court yesterday. Mandeka described the DA’s court action as “audacious” and charged that it in fact “does violence to the doctrine of the separation of powers” requiring the court to assume the powers (of suspending Motsoeneng) that are “exclusively vested in the Minister”.

He charged that the DA was “violating the rule of law” in that it was asking the court to “take over power from an institution”. Maneka argued that provisions in the Broadcasting Act and the Articles of Association of the SABC provided “adequate remedies including the remedial action of suspension conferred upon the executive authority and legislative functionaries of government”.

He suggested that the DA had initiated a parliamentary process in the National Assembly to call on the Minister to deal with the issues raised in the Public Protector’s report and that this process “provides an adequate remedy for the DA”. In other words, resorting to the High Court for an urgent interdict was an unnecessary and premature exercise.

Maneka (and by proxy the Minister) reminded the court that the PP “did not find or recommend that Mr Motsoeneng was not eligible to hold office as the Chief Operations Officer of the SABC or that he was precluded from consideration for that post by reason of her findings”.

The use of the words “accurate facts and circumstances” also provides some hint that the Minister and the Board are of the opinion that the Public Protector’s report did not consider several aspects they believe are important in the matter and that vindicate Motsoeneng.

“The Public Protector recommended disciplinary action against Mr Motsoeneng. One cannot anticipate findings of fact, and conclusions of law which may be made in due course, and assume that the only conclusion that will be made is that Mr Motsoeneng is not qualified to hold the relevant office. To do so is make a mockery of the prescribed disciplinary proceedings,” said Maneka.

Lastly, Mr Maneka said that the assumption could not be made that “the logical outcome of disciplinary proceedings is the dismissal of Mr Motsoeneng as the acting chief operations officer”.

Which is precisely what Advocate Anton Katz (SC), acting for the Democratic Alliance, told the court on Monday; that any disciplinary hearing would be “a sham”. For now it appears as if this will be the most likely outcome of a saga that has seen some of the best legal minds in the country navigate a legal minefield.

And after it all, Hlaudi Motsoeneng, like the other Houdini in our midst, has once again slipped out of the tangled web. Watch this space. DM