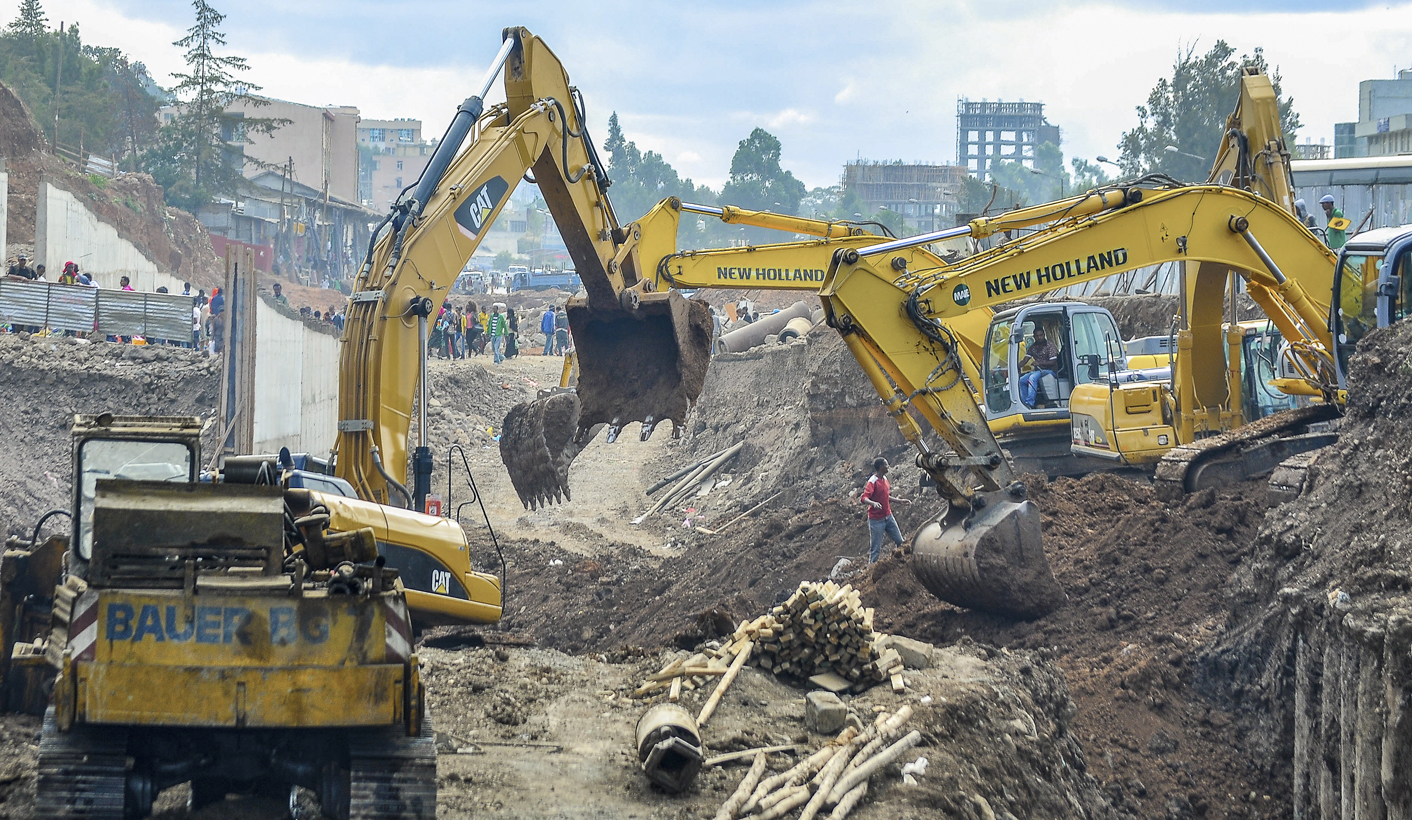 Construction of the electrified railway system enters the final phase in Ethiopia GREG-MIDDLECLASS-SUBBEDM.jpg

Africa, defined by outside, has been viewed in the bipolar narratives of good and evil. Lately, the “rise of the middle class” dominates, calling for investment and telling foreigners the bad times are over. GREG NICOLSON looks at a new report that grounds the issue and should offer South Africa its own opportunities while leaving the Hollywood narratives for Hollywood.

1990s: Kurt Cobain, bless him, dies. The Spice Girls spice up our lives. Baywatch runs for the whole decade; yes, the whole decade. Gangsta rappers actually act gangster. The Real World paves the way for reality TV. And Africa, oh Africa, is a failure of structural adjustment programmes, torn by countries’ inability to unite citizens (subjects, really) beyond colonial divisions, beyond nepotism and a TIA disease of corruption, violence and poverty. There’s Mandela, but otherwise?

2000s: Beyonce goes solo. Aaliyah, bless her, dies. The Kings of Leon emerge. The OC, Arrested Development, Gilmore Girls and, frighteningly, High School Musical hit the screen and Kanye West, pre-Kim, blows up. Along the way, so does Africa. The Dark Continent finds Leonardo DiCaprio and a glimmer of light.

These narratives of “the hopeless continent” and “Africa rising”, pumped by the West, woven into its knowledge with nostalgic pop culture, rubber-stamped by media and financial institutions, are bullshit. There’s truth, of course. The Rwandan genocide, Somalia’s slide into failure, and war in the Democratic Republic of Congo were terrible, very anti-investor. Economic growth, particularly in places like Ethiopia, Mozambique and Ghana, and increased political stability are more positive. But the continent has been played like the character Tyrion Lannister in Game of Thrones, a dwarf who vacillates between good and evil, dividing viewers and their allegiances. Currently, “Africa rising” reigns and investors are pointed towards the boom.

A new study by Standard Bank is trying to ground the narrative in some sort of reality. It looks at Africa’s rising middle class, one of the key drivers of the perception that it’s time to invest in the continent. The report, titled “Understanding Africa’s Middle Class”, notes the African Development Bank’s (AfDB) study “The Middle of the Pyramid” claims that by 2010, 350 million people or 34% were middle-class, up from 27% in 1990. The AfDB study says anyone with a daily consumption of US$4-20 is middle-class, but also includes a “floating class” of people with a consumption of US$2-4 a day. The Standard Bank team says assessments have been “overly generous” and calls the AfDB view “exaggerated”. When the African Development Bank’s report was released, its chief economist Nthuli Ncube clearly tied it to a call for investment.

Speaking on Tuesday, Standard Bank economist Simon Freemantle tempered this view: the classes are changing, slowly. To classify the middle class, Freemantle applied a similar definition of South Africa’s living standards measure (LSM), with LSMs 1-4 low-income, LSM 5 and part of 6 defined as lower-middle, and the upper region of LSM 6 to LSM 10 defined as middle income. “Our assessment, while not as generous as the AfDB’s, does still accommodate the specific dynamics shaping largely small and low-income African economies, and adopts a more nuanced approach than, for instance, McKinsey, which considered households with discretionary spending power as those with income of more than US$5,000 a year,” reads the report.

Standard Bank zoomed in on 11 countries, chosen for, among other things, scale of population, growth and economy: Angola, Ethiopia, Ghana, Kenya, Mozambique, Nigeria, South Sudan, Sudan, Tanzania, Uganda and Zambia. Together, they have a combined population of over half a billion, a GDP of over a trillion US dollars, and, according to the most recent figures, an average growth of 6.5%.

Put on your stats hat. The report reads: “Since 2000 the collective GDP of the 11 measured economies has grown tenfold from US$120 billion to today’s level of over US$1 trillion. This compared to growth of just 25% between 1990 and 2000. The growth of the middle class has been similarly impressive: where the 11 countries had a total of 1.4 million lower-middle-class and one million middle-class households in 1990, and three million lower-middle and 1.6m middle-class households in 2000, currently there are almost 15 million households in these two categories (combined) – representing growth of 230% since the turn of the century.”

It continues: “Looking ahead, an even greater elevation in income growth is anticipated in the next 15 years; between 2014 and 2030, we expect an additional 14 million middle-class households will be added across the 11 focal countries – tripling the current number. Including lower-middle-class households, the overall number swells to over 40 million households by 2030, from around 15 million today.” The predictions, of course, depend on political and economic stability in the countries, but looking at each nation, Standard Bank made best- and worst-case scenarios and chose the middle ground.

Such growth obviously offers economic opportunities, but before you enter the new holy grail of investment, consider that according to the Standard Bank team, the middle-class in these 11 countries, including Nigeria, is roughly equivalent to the size of the middle-class in South Africa. In fact, Freemantle said Sub-Saharan Africa’s households remain predominantly low-income with a slow lift out of poverty. He found 86% of people in the 11 countries remain in the low-income category; Ethiopia is at one end of the spectrum with 99% of people defined as low-income with Angola at the other end on 65%.

While East Africa is lagging behind in pushing low-income earners to the middle, the region offers the most interesting findings in the report. In fact, it provides the counter to the economic obsession with the middle bands. Tanzania 97%, Uganda 96%, Kenya 92% – the share of low-income households across the region is high, but the figures illustrate something telling. Forget the middle-class; people are moving from the poorest of the poor to poor, but better off.

“The general findings are potent, indicating a broad upward shift within the low-income band as households shift from LSM1 (deeply marginalised) into LSM2 and beyond. Where today there are 28 million LSM1 [households] across the 11 countries, this represents a decline from 52 million in 2000 – and by 2030 we expect a drop to around 33 million. This despite fairly rapid population growth across all of the measured economies.”

Simply, the rise in the middle class has and will be secondary to the upward movement of low-income earners within the low-income group. “The contraction of LSM1 is being reflected in the growth of LSM2, as well, increasingly, of LSM3 and LSM4. Today there are 22.5 million LSM2 [households] across the 11 economies, up from 11 million in 2000. By 2030, we expect LSM2 will cover almost 37 million [households]. Today LSM3 covers almost 14 million [households]; by 2030 we imagine this could lift to 26 million. And LSM4 has grown from 3.7 million [households] in 2000 to 10 million today – by 2030 23 million [households] will reside in this band.”

Africa’s growing middle class, which is driving the rising narratives, does exist, but according to Freemantle the upward movement of low-income groups is where the most economic potential will be realised. It’s also these groups that will have the largest impact on political and social development. They’re the groups in the majority, the ones with the largest votes and the largest claim to the need for improved living conditions.

It may not sound exciting for many of the large foreign investors, but the narrative presented by Standard Bank is that in key African countries people are gaining purchasing power, not the sort that will see them buying passenger vehicles, though that’s also increasing, but the sort that takes citizens from dirt poor to poor.

On the whole, relatively few people are being catapulted into the middle class. But life for many is improving, at least in terms of spending power, slowly. In reality, the Africa’s growth is diverse, disparate and complex. The Standard Bank report shows that it doesn’t fit into a pop culture narrative; it’s hard to cheer about the situation, yet we need not despair.

From the South African perspective we need to pause. These countries are growing rapidly, while SA already has a developed middle class. Policy makers need to realise (some already have) that across our borders lies a direct line to boost our economy, if the game is played properly. The Standard Bank report provides a realistic view of where those opportunities lie. South Africa needs to take advantage of the nuances and leave the Hollywood narrative for Hollywood. DM

Photo: A photograph dated 16 April 2014 and made available 21 April 2014 shows heavy machines working at the construction site of the Addis Ababa Light Rail Transit system in Addis Ababa, Ethiopia. The construction of the railway system, undertaken by the China Railway Engineering Corporation, and which officially began on 31 March 2012, is nearly 60 per cent complete, according to the Ethiopian Railways Corporation, the local media reported. When completed, a 34km railway system will be able to transport 15,000 passengers per hour, according to reports. EPA/DANIEL GETACHEW