Pule and the Youth League: Then again, Mabe they won’t 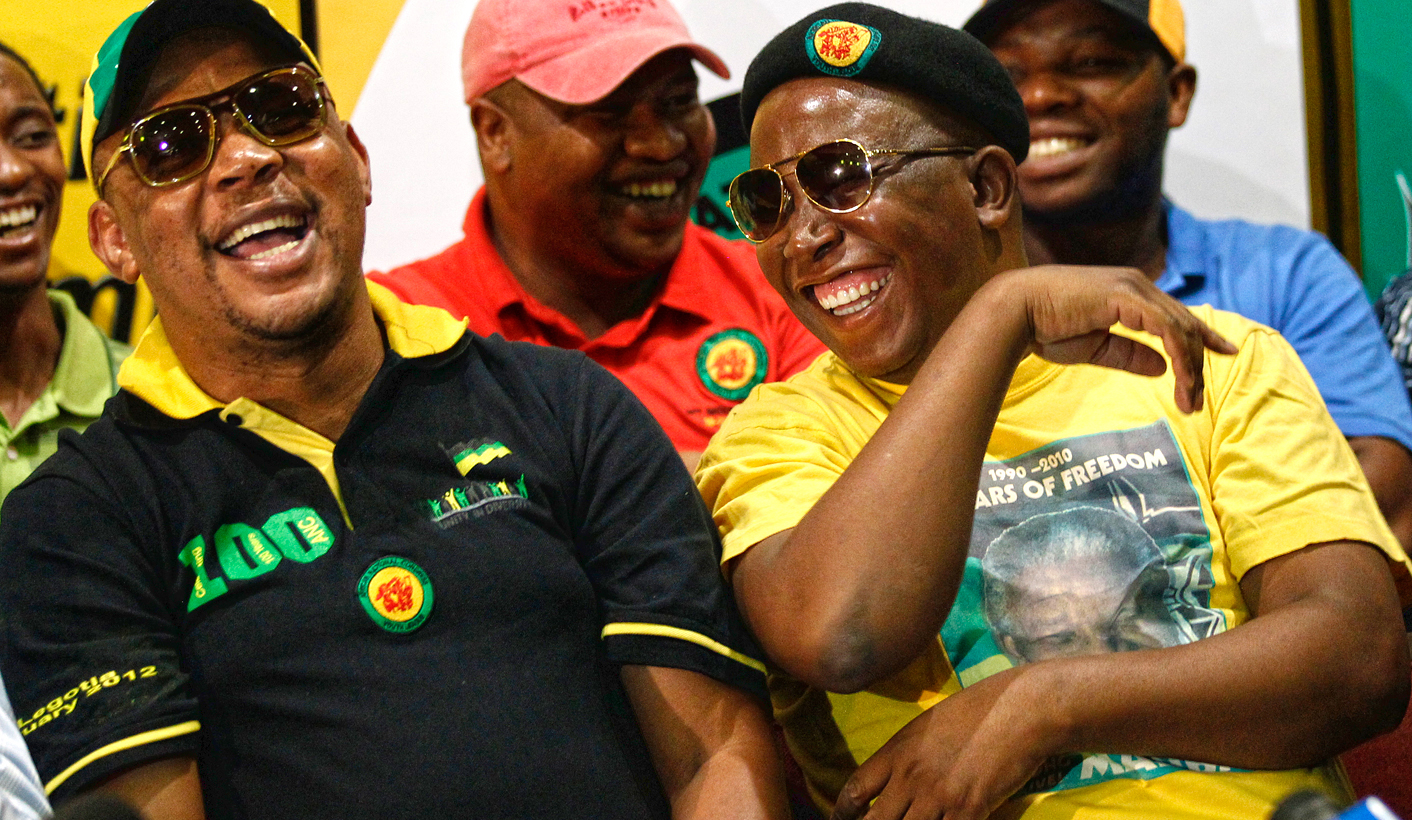 The ANC Youth league is now just five weeks away from holding its first national congress since its formal leadership was disbanded by the ANC’s National Executive Committee in March 2013. At that congress it’s due to reconstitute itself, and be welcome once more into the ANC family. However, it’s going to be a long hard slog for the League to try to live up to the history it has so gloriously painted for itself. And its first big test is whether the young lions are going to choose the right lion to lead their pride. By STEPHEN GROOTES.

There. I’ve said it. Not that you would have thought I would have three years ago. It’s easy to understand, really. During the period after Jacob Zuma ascended to the presidency up until the ANC’s Mangaung Conference of 2012, there was no bigger newsmaker. Much of that, of course, was due to its then leader, Julius Sello Malema, who claimed, repeatedly, that he would never form a new party.

It was a time when almost anything could happen at a League press conference. You could get thrown out. You could hear the immortal phrase “There is no word in Pedi for hermaphrodite”. Malema could “kill for Zuma”. Or the ANC could have moved “from a democracy to a dictatorship under Zuma”. It was always, always, political rock ‘n roll. Or to throw in a completely unnecessary reference to his predecessor: razzmatazz at its best.

But the party eventually came to an end. After three suspensions, Malema was expelled, Ronald Lamola became, briefly, leader of the League, and then eventually the NEC just wearily gave up, and folded the whole thing. Much of that decision possibly had to do with the fact that the ever-democratic Malema in his quest for dominance had basically shut down many of the structures of the League himself. Any provincial or regional body that went against him was disbanded. In the end there was really only one province running its own affairs.

And then there was the financial situation. Under Malema, the League had run up huge debts, and not bothered to pay them. I well remember his second conference, at Gallagher Estate in 2011, and the whiskey and food that was on offer in the “VIP Lounge”. For the only time in this reporter’s career, he was welcomed into said lounge and told to make himself at home. (After watching Malema claiming victory, and quite literally walking to the lounge and kissing a baby right in front of me, I may have had a drink. Just the one, mind.)

So politics has been slightly boring without the League. Things changed. Zuma won hands-down at Mangaung, and only the Gauteng ANC has appeared to be just the slightest bit critical of him.

Now there’s a chance to get things going again. And for the ANC, this matters. If there is one section of the vote among which Malema’s new incarnation has appeared to do well, it’s unemployed young black people. And this is where the newly formed League would have to campaign, and campaign hard.

This means the League will have to toe a careful line. It should maintain some of its reputation for radicalism, in a bid to attract those votes, while also being slightly closer to the ANC line than Malema’s Youth League ever was. A bit of realism would help too. It probably wouldn’t do to keep claiming that it has a role as “king-maker” in the ANC, after such a humiliating defeat at Mangaung. But aspiration is a powerful force in our society, so it will need to carve out a place as an entity worth courting in the leadership battle to come in 2017. In what for now looks like a contest between Nkosazana Dlamini-Zuma and Cyril Ramaphosa.

All of this means the choice of leader matters.

And boy is it so disappointing to see that Pule Mabe appears to be one of the front-runners at the moment. Mabe was the treasurer for Malema. It was on his watch that the League’s millions went missing. The National Task Team running the League has repeatedly said it wants to know what happened to that money. Surely Mabe is the first person to ask. And yet it seems at this point that, publicly at least, he has not provided a full explanation as to what happened to the money.

It gets worse. In the meantime, Mabe has been charged with fraud and corruption. In a wonderful detail in a City Press report it appears he used Social Security Agency money to pay his credit card bills, high-end boutiques, and home cinema equipment. In person, the man himself during the Malema era used to enjoy lecturing the press whenever he could, in the mistaken belief that somehow we would report on his diatribes. As a general rule, once Mabe started, it was usually time to pack up.

He also, and this is where one might need to be delicate, does not appear to be the vision of youth that comes to mind when one thinks of the Youth League. As one approaching early middle age myself, I feel his pain. But he is likely to face the age question and runs the risk of being asked to produce one of those pesky unabridged birth certificates if he does actually contest for the job in the end.

Luthuli House itself has a dilemma here. Should someone like Mabe win an election, it may send the worst possible signal about the future of the League. Those who are very cynical may suggest that based on his past form, he’s not above selling the vote of the League to the highest bidder. Of course, he could still be cleared of all the corruption charges, and there may be an explanation for the League’s missing millions. That said, there are supposed to be Mangaung resolutions that state people who are not suitable for leadership should not be leaders. In other words, someone facing criminal charges such as these should not be allowed to contest the election. Considering that John Block is still leader of the Northern Cape ANC and that Zukiswa Ncitha is still mayor of Buffalo City, despite the criminal charges they face, Luthuli House must surely be looking for someone to use to at long last set a precedent.

Mabe could well fit the bill.

However, there may be a reason for his apparent bullet-proofing. In 2012, quite unexpectedly, he became a sudden convert to the Zuma cause. As a result, he won a seat on the NEC. Clearly, a deal was done. He was somehow won over from the Malema side. And then he became an MP. Perhaps Zuma knew that it would only be a matter of time before the police and the courts caught up with him. Or perhaps it’s about having someone he can control. Or perhaps it has very little to do with Zuma at all, and far more to do with Mabe’s own abilities and ambitions.

Of course, Mabe is going to face competition. This should be a contested congress. And one that’s vital to the League’s future. DM