Centrafrique in crisis: Instagrams from the Edge

Centrafrique in crisis: Instagrams from the Edge 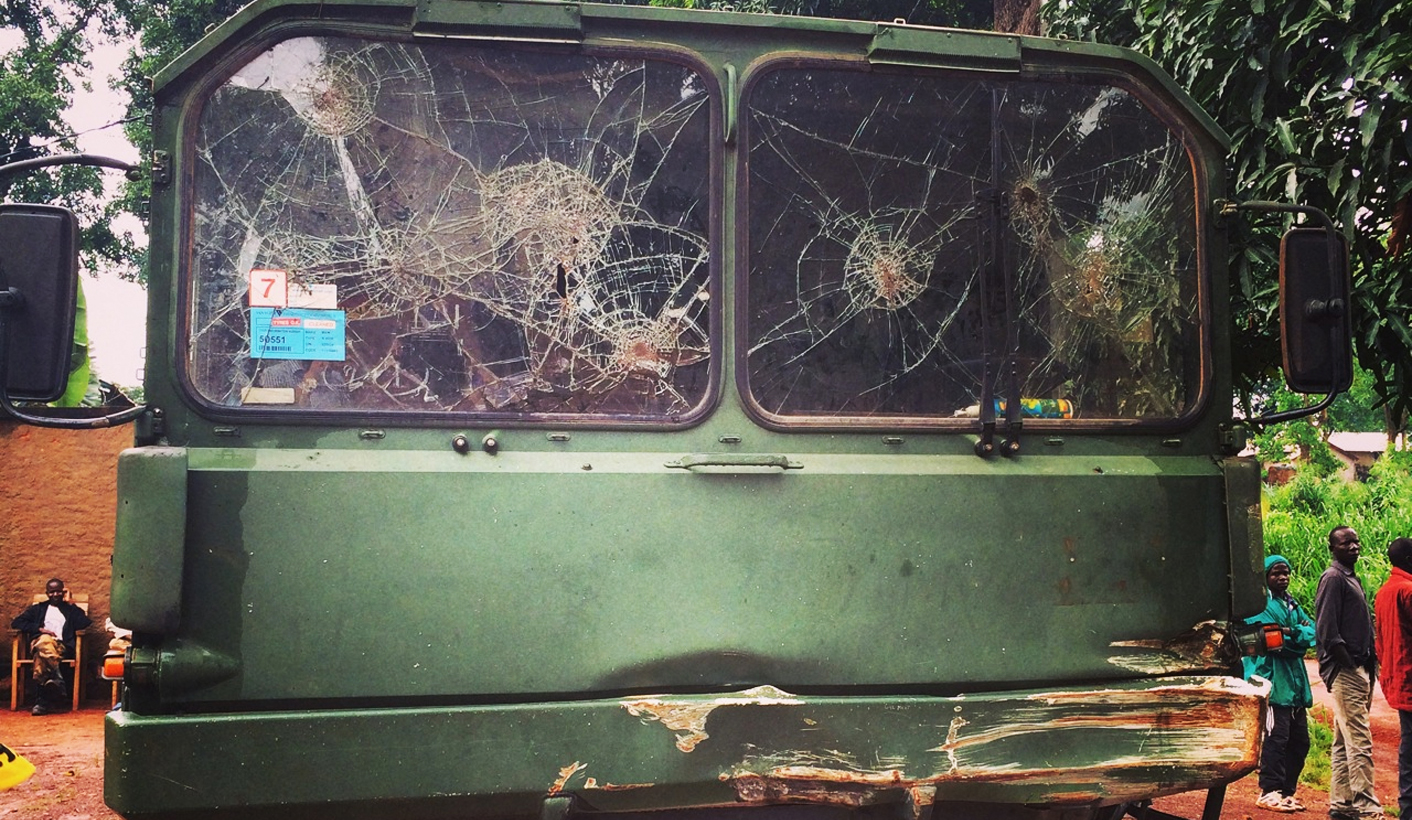 RICHARD POPLAK and KEVIN BLOOM have been travelling the Central African Republic, researching the conflict that has just birthed Africa’s newest balkanised state-let: Dar El-Kouti. This, then, is the contents of their iPhones.

Monday 11 August 2014. An armoured vehicle belonging to the French forces, known in CAR as Operation Sangaris, rolls down the street outside the Hotel Levy, where we were installed for the duration of our stay in Bangui. “Sangaris” is a reference to the beautiful red Centrafrique butterfly, but the French are not quite so gentle a presence. Their mandate is to disarm both rebel groups—Seleka and anti-Balaka—without engaging them in combat, which is sort of like legalising weed without criminalising its sale. And while we have literally seen Sangaris forces fist bumping babies, they are not widely adored.

Bangui, CAR’s capital, is studded with stunning examples of faded modernist architecture, much of it built from concrete, dating back to the liberation era. The South African photographer Guy Tillim referred to these types of structures, which seem vertiginously unmoored from the present, as “Floating Worlds”.

A resident of the enormous refugee camp nestled up to the sole runway at Bangui’s international airport gazes out at Sangaris forces rolling into their headquarters at Camp M’Poko. In December 2013, almost 100,000 people crowded into the camp, fleeing hostilities in the streets downtown. About 38,000 remain.

General Issa Issaka Aubin, 44, commands the Seleka rebel group in Bangui. He and his men have been confined to their barracks on the outskirts of the city with their considerable cache of arms. Aubin took up arms in 2006, at the relatively late age of 36, because he was outraged at how dismissive then-President François Bozizé’s regime was of Muslim communities in the north. “No roads, no schools, no development, no nothing,” he told us.

While Seleka is nominally a Muslim rebel movement—and their arch enemies, the anti-balaka, are nominally Christian—General Aubin refused to characterise the conflict as a religious war. “It is only the politicians who make it like this,” he said. “There are no Islamists or Jihadists.” Pointing to the men at his command, he noted that just as many were Christian as were Muslim.

An astonishing number of soldiers we encountered across the country, both Seleka (as pictured) and anti-balaka, were in their mid-teens. Child soldiering is an unfortunate but pervasive element of the conflict.

Anti-balaka’s Bangui-based spokesperson, Nicholas, 36, displaying his battle charms. When asked how many men in the country had joined his movement, he said “Almost the whole of the republic. Every Christian in the country.” He also offered to arrange for us our own battle charms at the relatively modest price of USD400.

CAR is the second poorest country in the world, and finishes last or next to last on just about every development indicator. And yet, on the arteries that ferry people and goods into and out of the capital, a frenzied commerce takes place. This truck was one of a number we encountered on the 400km stretch to Bambari that…

…and at around the halfway point, becomes this.

This is the village of Poumayassie, a place that the war found in January, when a Seleka contingent visited mayhem upon the locals. These young men were kind enough to repair our second flat tyre of the day. They employed a traditional glue called “banga”, sapped from the eponymous tree, that works as well as any industrial variant.

After taking refuge for the night in the Catholic mission of Grimari, we woke up to find on the wall this image of Sister Marie-Clémentine Anuarite Nengapeta, the first black African woman to be beatified by the Vatican. Like Poumayassie and most of the villages on the last stretch of road to Bamari, the town of Grimari had suffered much at the hands of the rebels.

Seleka national spokesperson, Ahmat Nedjad Ibrahim, in his compound in Bambari. Ibrahim told us that he joined the movement in December 2011, after Bozize’s soldiers shot him up and left him for dead. “I then knew I had to take my revenge,” he said.

The Ouaka River, Bambari. As a French Foreign Legion soldier told us, “The river is the city’s fracture zone, which makes it also the country’s fracture zone.” The north bank is Seleka controlled, the south bank belongs to anti-balaka. (The chicken was a non-combatant).

This is the MISCA base in Bambari, headquartering the African Union forces tasked with protecting civilians and refugees (and us, during our brief stay in town). The men in the picture are crack Gabonese troops, who happened to be celebrating their independence from France. Fifty-four years after that momentous event (17 August, 1960), they find themselves working alongside the French, trying to bring peace to a neighbour. DM