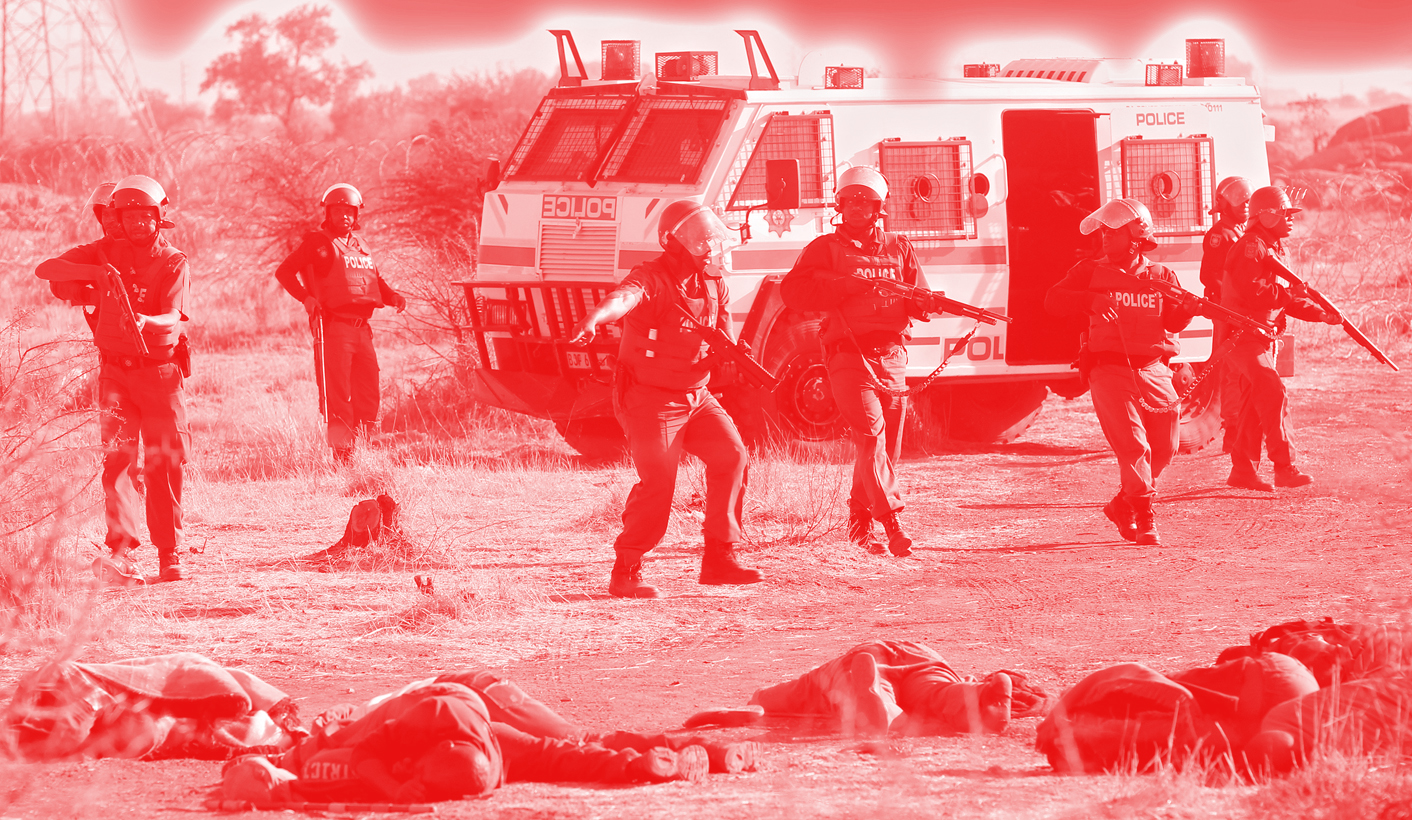 Two years after the killing of 34 miners at Marikana, no official memorial to the massacre has yet been established. Perhaps a state-sponsored memorial to state-sponsored violence can never be anything more than an expedient gesture. But in Cape Town this week, artists have brought the lives of those slain at Marikana into the city’s genteel streets in anarchic, confronting ways. By REBECCA DAVIS.

“We are sorry for what happened on that particular week.” – Former Police Minister Nathi Mthethwa, 18 July 2014.

“We will never replace your loved ones and I say we are truly sorry for that.” – Lonmin CEO Ben Magara, 16 August 2013.

On Thursday, almost exactly two years since 34 miners were gunned down at Marikana, street signs around central Cape Town underwent a transformation. They bore their regular street names, but beneath those, in lettering almost as large, a secondary street name had been attached

Molefi Ntsoele was from the mountain village Ha Tebesi in Lesotho. He was employed as a rock-driller on Lonmin’s Karee mine. City Press reported that he made the long journey home every two weeks to bring groceries to his family. He was killed by police on 16 August, 2012, at Marikana.

Darling St. also took on another identity: Anele Mdizeni St. Mdizeni was a 29 year-old Pirates fan from the Eastern Cape. “We were expecting so much. He was here just this past Easter. My son had big dreams,” his mother told City Press. Mdizeni too died at Marikana.

Pedestrian walkway St George’s Mall, where vendors sell curios and fabrics to tourists, became Thobile Mpumza St. Mpumza, we know from the proceedings of the Farlam Commission, was found dead at Marikana with 12 wounds in his body.

34 street signs, 34 miners. Affixed to each temporary sign was a short biography of each miner and, where available, a photograph.

Around Cape Town, too, a number of statues of colonial figures received a makeover. Old white men immortalized in stone suddenly appeared draped in mining overalls, their foreheads wreathed in head lamps. Banners outside the stately NG Kerk carried protest slogans. A miner’s face, illuminated only by a torch, with the words:

The right to life.

The right to a living wage.

Thousands of kilometres from South Africa’s mining belt, reminders of the industry which built South Africa’s wealth while exacting a terrible human cost were everywhere.

This was the work of a collective of anonymous artists acting early on Thursday morning, the African Arts Institute’s Jill Williams confirmed to the Daily Maverick. “They aimed to give a human face to the number 34,” she said, “using wording and imagery to evoke a sense of awareness and even emergency.”

They are not the only group using street art to commemorate Marikana on the second anniversary of the massacre. For the last few months, a distinctive graffiti stencil has appeared on walls and buildings around Cape Town. REMEMBER MARIKANA, it exhorts in blood-red paint. Beneath it, a stencil of the “man in the green blanket”: miners’ leader Mgcineni Noki, who was among those who died at Marikana.

A graffiti collective called ‘Tokolos Stencils’ is responsible for this work. Communicating anonymously with the Daily Maverick via email, one member explained: “We want to remind people both of this atrocity and the fact that people remain resolute and indignant in spite of it. That we still fight for what Mambush [Noki] stood for.”

Their Marikana stencil has appeared on highways, road-signs and bus stops. It has added a different kind of message to a number of existing murals, particularly those with a ‘rainbow nation’ sheen. “All happy go lucky democracy murals must be challenged!” Tokolos Stensils writes on its Tumblr.

“We like to try to play with other people’s art – improve their message,” the Tokolos member explained.

“We stencil it everywhere because everyone must be reminded about Marikana and see what we are trying to say. We can’t afford to advertise so this is our alternative form of advertising. We like spots that people see often – like at train stations and on busy streets and freeways.”

In May the collective painted its Marikana stencil on to a statue of Cecil John Rhodes in thinker pose on the University of Cape Town campus. “Tokolos reminds us that colonialism and the massacre at Marikana are not only interconnected but part of a long history of dispossession, exploitation and murder of blacks (and especially poor blacks),” the group explained in a statement at the time. UCT called it “an act of vandalism” which was an “insult” to students and staff.

“We don’t do this because it’s illegal. We do it because we have no choice,” says the Tokolos member. “It is the only way of speaking directly to the people through art. Most other art forms have been commodified and therefore don’t speak against the status quo. This is one of the few affordable avenues left for people like us that cannot afford to buy billboards or walls to do it on.”

But other artistic interventions memorializing Marikana over the past weeks have been of a more legal fashion. The African Arts Institute (AFAI) screened photographs in Church Square last week taken by photojournalist Yazeed Kamaldien of the women and children of Marikana. This week, the AFAI organized a mural-painting exercise in Nyanga, which saw artists and children together painting a wall with the iconic ‘miner in blanket’ image.

In Langa, the group has hosted two screenings of Rehad Desai’s Marikana documentary ‘Miners Shot Down’, followed by a public debate. (While a petition urging SABC and eTV to screen Desai’s film continues to circulate, you can watch it for free on YouTube this weekend.)

Thursday saw seven poets walk the streets of central Cape Town, together with 34 actors representing the miners killed at Marikana. Gold dust and red dust mingled underfoot, symbolizing ore and blood. “It was very powerful: there were moments where cars had to stop just to respect,” Williams said. “It was a performance art piece, like a poetic ritual, but in the form of a group mourning through the city.”

The event was deliberately kept low-key. “We didn’t want to tell too many people what we were doing, because we wanted it to be an organic process,” Williams explained.

The purpose of these interventions was not simply to pay homage to those killed at Marikana, but also to remind the public of the power of art to provoke discussion and evoke emotion.

“Artists have always been the most effective social commenters,” Williams suggests.

And perhaps the memorializing of horror like Marikana is best left to artists, rather than politicians. DM