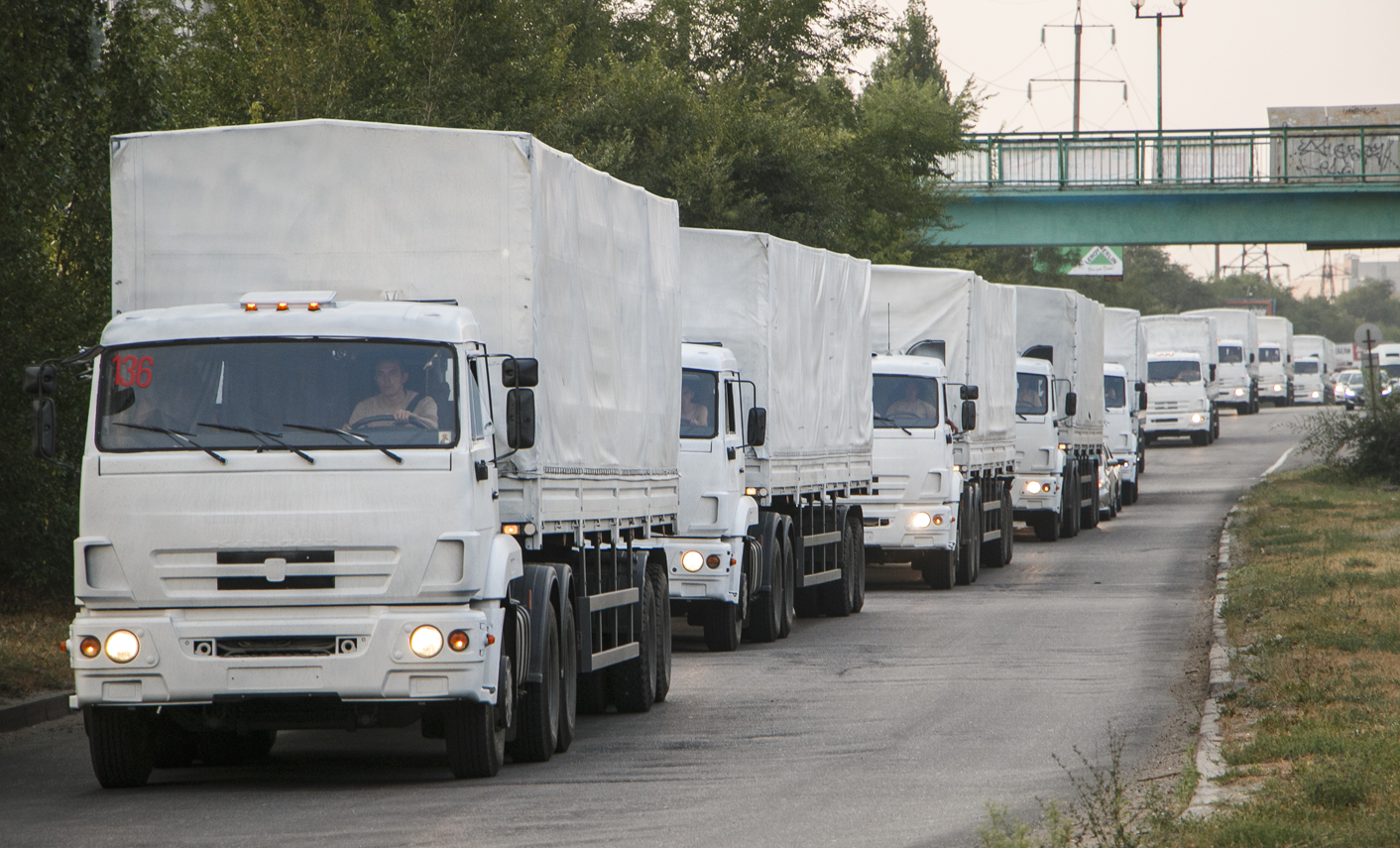 Ukraine described Russia's dispatch of an aid convoy advancing now towards its border as a cynical act designed to fan a pro-Russian rebellion the UN said on Wednesday had claimed nearly 1,000 lives, fighters and civilians, in two weeks. By Natalia Zinets and Dmitry Madorsky for Reuters.

Kiev declared that the convoy would not be allowed to pass; but a presidential spokesman later suggested a compromise might be found, bringing it under the control of the International Committee of the Red Cross (ICRC).

“First they send tanks, Grad missiles and bandits who fire on Ukrainians and then they send water and salt,” Prime Minister Arseny Yatseniuk said of a conflict that has killed over 2,000 since mid-April.

“The level of Russian cynicism knows no bounds.”

The comments reflected suspicions in Kiev and Western capitals that passage of the convoy onto Ukrainian soil could turn into a covert military action to help separatists in the Russian-speaking east now losing ground to government forces.

Russia, which sees Russian-speakers in the east under threat from a government it considers chauvinistic, said any suggestion of a link between the convoy and an invasion plan was absurd.

The convoy of heavy trucks rumbled out of Moscow region on Tuesday and traveled some 500 km (300 miles) to the southwestern Russian town of Voronezh. There it stopped at an air base behind high fences, according to a Reuters reporter.

Several people who entered the airbase and spoke to Reuters on condition of anonymity said dozens of trucks were still parked at the airbase. It was not clear whether the Voronezh convoy was the only one travelling towards Ukraine.

“How can I put it? It’s pretty difficult. But how could we not help our Slavic brothers? We are all for it.”

An ICRC spokeswoman in Geneva said Russia had given a “general list” of goods on its convoy to Ukrainian authorities and the ICRC, but the aid agency needed a detailed inventory.

“A number of important issues still need to be clarified between the two sides, including border crossing procedures, customs clearance and other issues,” Anastasia Isyuk said.

The list of contents on the 260-truck convoy provided by Moscow included food, water bottles and generators, she said.

The last few weeks has seen signficant government successes against rebels who have abandoned a string of towns under heavy fire. Kiev says rebel leaders, some of whom are Russians and who seek union with Russia, are receiving arms from Moscow, something the Kremlin denies.

U.N. human rights spokeswoman Cecile Pouilly said the estimated death toll had risen to 2,086 as of Aug. 10 from 1,129 on July 26. The figures included Ukrainian soldiers, rebel groups and civilians, but were “very conservative estimates”.

“This corresponds to a clear escalating trend,” she told Reuters in response to an inquiry.

It was not clear to what extent the figures reflected escalation of the fighting, which erupted four months ago after a pro-Russian president was driven from office by protests, or delays in gathering data from government and local agencies.

State-controlled Russian television presented a picture of fierce battles around the rebelstronghold of Donetsk, accusing the Ukrainian military of indiscriminate shelling or rocketing of civilian buildings. Residents interviewed said they were being bombed everyday and hiding in cellars.

The approach of the convoy presents Kiev with a dilemma.

Ukraine says it fears it could become the focus of tension and conflict once on its soil and provide pretext for a Russian armed incursion. At the same time, Kiev does not want to seem to be blocking aid and providing a moral basis for Kremlin action.

A presidential spokesman said that the Ukrainians, at a meeting late on Tuesday night, had agreed to accept the aid for Luhansk region in a bid to prevent “a full-scale invasion” by Russia.

One option he said was for the aid to come into Ukraine at a point further along the border closer to Luhansk itself after checks by Ukrainian border guards, customs and officials of theOrganization for Security and Cooperation in Europe (OSCE).

The aid could then be distributed under the supervision of the Red Cross, said the spokesman,Svyatoslav Tseholko.

Kiev accuses Russia of supporting and arming the rebels – who now appear to be on the verge of defeat by government forces – with tanks, missiles and other weapons. Moscow denies this.

Four months of fighting in the east has produced a humanitarian crisis in parts of eastern Ukraine. People in the main cities of Donetsk and Luhansk, on the border with Russia, are suffering acute shortages of water, food and electricity.

Yatseniuk said the Kiev government had received 6 million dollars from its Western partners which would be used to alleviate conditions in distressed areas. DM

Photo: A picture made available 13 August 2014 shows the Russian convoy carrying humanitarian aid for residents in rebel eastern Ukrainian regions moving along a road in the city of Voronezh, about 530 km from Moscow, Russia, 12 August 2014. Ukraine said that any foreign humanitarian aid will have to be delivered by the International Committee of the Red Cross, dealing a blow to a large Russian convoy en route to the country’s embattled east. The Ukrainian government fears the Russians could be supplying arms to separatists, under the guise of supplying 2,000 tons of food and medicine to civilians in the rebel-held areas. EPA/KIRILL USOLTSEV/MOE-ONLINE.RU