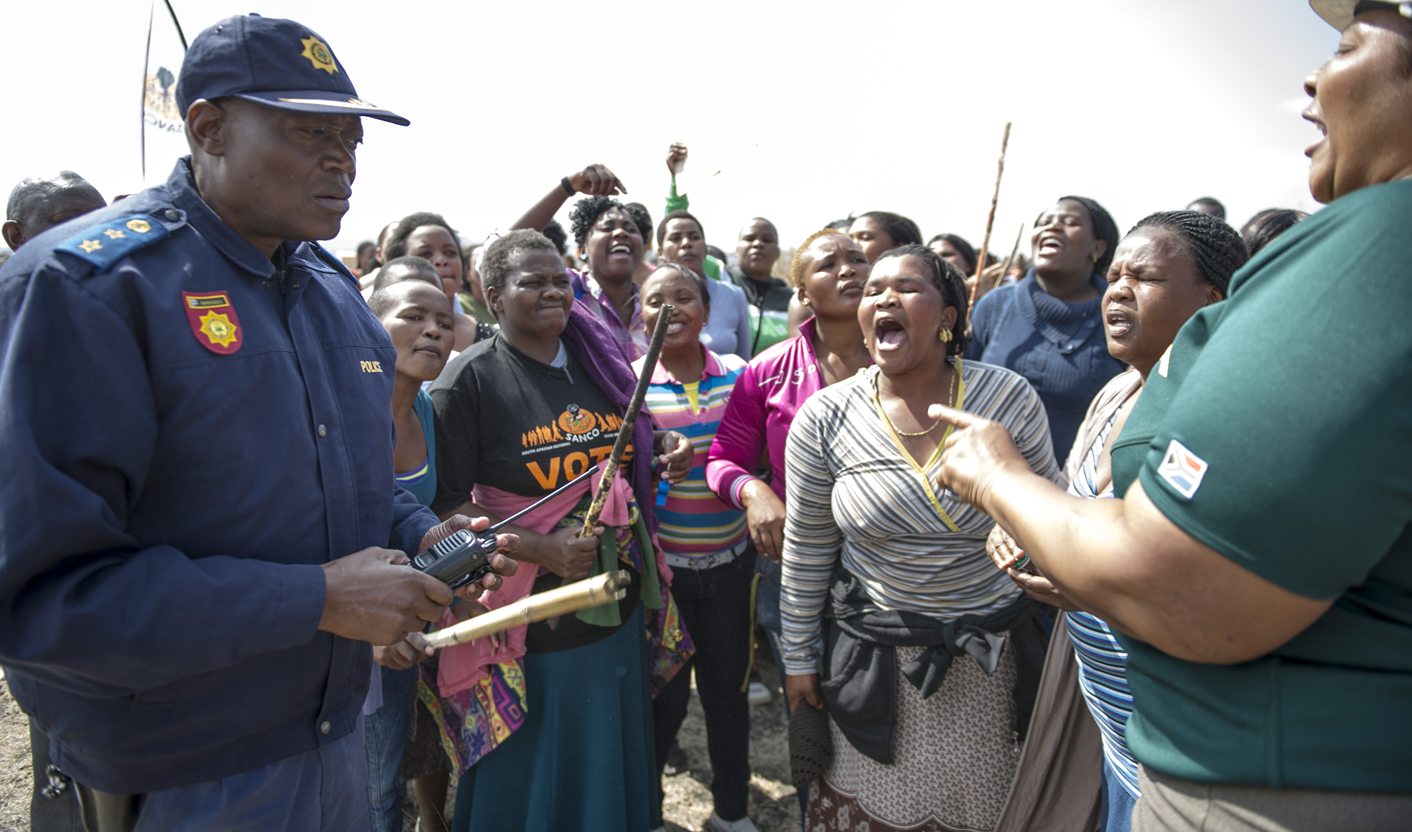 The collective pain was overwhelming at the Marikana Commission on Wednesday. Two years after the killings, the relatives of the victims took the floor and spoke of good men, justice, and finding a substitute for the unique. They spoke of men with names, faces and families, what they left behind, what can’t be replaced. By GREG NICOLSON.

“I am Andile Yawa, Cebesile Yawa’s father. I live in the Eastern Cape. My son was killed in the Marikana tragedy. He was very respectful and humble and he took care of his family very well. He liked sports a lot and he was liked in the village.”

Yawa held his fist against his face, had a sip of water. “I was forced to stop working due to my ill health. My son took over my job in the mine. He went to Marikana in 2007. As far as I know Cebesile rented a shack in the informal settlement Karee. He phoned us regularly, probably three times a week. He would come back home to the Eastern Cape twice a year, during the Easter and Christmas holidays to visit us. Cebesile took over my responsibilities. He was our only breadwinner.”

Yawa was one of the relatives of the 44 people killed in Marikana in the week to 16 August 2012 who spoke at the Commission on Wednesday. Family members of police officers, security guards and mineworkers all spoke, united in their lasting grief, demanding justice, and struggling to provide for their families. Good men, lost.

“Cebesile phoned me on Wednesday 15 August 2012. During the conversation he informed me that workers were on strike because of a wage dispute. He told me that he and other fellow workers from other shafts were at the koppie. They had invited the employer to come and listen to their grievance and their demand for a wage increase,” said Yawa, dressed in a grey checked coat and yellow polo shirt.

The relatives spoke of their last phone calls. The calls that didn’t go through. On a screen were the pictures of the deceased. Thobisile Zibambele even told his wife Nokuthula his bank details, as though he knew what was going to happen. Many relatives wanted their husbands to come home. They’d seen the reports. But it was a strike for rights, a strike to earn something decent for their hard work that could provide for their dependents. Good men, police, security, mineworkers, all were taking care of their families.

Yawa’s son took care of his child, four brothers, a sister and parents. “We observed that my son had a bullet wound in his abdomen and other wounds on his left shoulder. We went to the koppie and shack to collect his spirit. The events relating to how my son was actually killed remain unclear,” said Yawa of his trip to Marikana.

The relatives sat listening to each other; rows of widows, cousins, sisters, parents, all wearing headphones that played translations. Tissues in hand, they shared each other’s grief. “I personally lost the best part of my life. He was my soul mate,” said Warrant Officer Sello Ronnie Lepaaku’s wife.

Mphumzeni Ngxande’s wife Nonkululeko said her husband was quiet, liked soccer and built the family a house. “I am suffering. The whole family is suffering. I am deeply hurt by all this. Life is also so difficult without financial support. My husband was everything to us. How are we going to move on with life?” Her body was sobbing, shaking, and she never looked up while she cried.

Ngxande collapsed, setting off a wave of cries amongst the widows. Everyone was crying, their faces buried in tissues. Lawyers and officials tried to help, tears in their own eyes. Ngxande was taken to hospital. Others needed medical attention.

Pain filled the Commission chamber. “We feel devastated by Cebisile’s death,” said Yawa. “I have a constant sound in my head of the children’s cries. I never thought that my son would be killed over a wage dispute. Cebisile’s death means that we are left without a breadwinner. I don’t know how we are going to survive. I want to find out from the Commission: how did our children die? And now that our children died we want to know what is going to happen to our families now?”

He blamed Lonmin. Others blamed the government or police. Yawa raised his voice, “What Lonmin did to us is very painful. To sit and actually sell our children’s lives, I am saying this because of my experience with the mines, I worked in the mines for a period of 30 years, long before the existence of these unions…”

Listening, another widow started crying, a hum rising like a starting engine. “The life of a person who is working in the mines is cheaper than even chewing gum […] A manner will be devised to kill people who are working in the mines, but as it is it doesn’t matter.” The pain is worse, knowing some people involved are living well. “They will live nice and live with their children,” yelled Yawa, “and their wives! And their brothers! Our families will live the picture that has been shown here.”

From their statements on Wednesday, that picture is one of poverty. It’s one of loss. It’s one where you have to return home to tell the deceased’s children that, no, their father isn’t coming back from the mines. It must also be one of frustration; at the Commission, mineworkers are called murderers, so too are the police. The nature of the inquiry doesn’t immediately square with honouring the dead.

But at least on Wednesday, it gave the families a chance to be heard. “Even if I were to die my spirit would rest in peace because I have mentioned what has been hurting me to this Commission,” said Yawa. DM