Embodiment of the quiet world 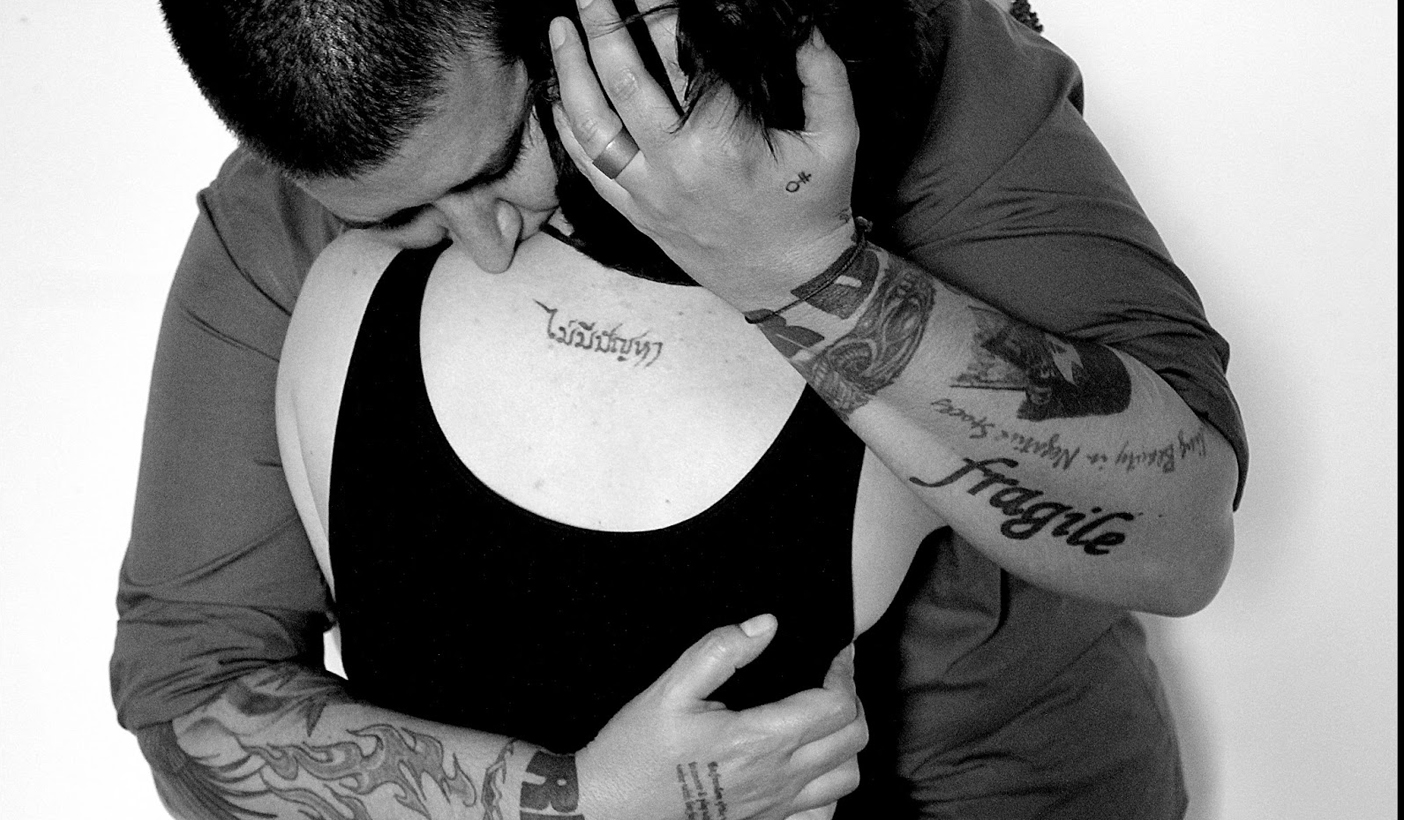 As women’s month passes most of us by, not really changing anything, one photographer is using her camera to capture the essence of South Africa’s gay and trans women. Not to celebrate, no; but to connect, and to capture a slice of their history. And to prove that they’re just like everyone else. By MARELISE VAN DER MERWE.

“I liked ‘Sobriquet’,” quips photographer Zunia Boucher-Myers, when asked about the choice of name for her latest series, “but I couldn’t pronounce it.”

That’s what you get when you speak to Boucher-Myers: to expect the unexpected. And that’s what’s behind her photographic series Embodiment, which – just in time for women’s month – aims to capture gay and trans women in their natural habitat. Those women who, in Boucher-Myers’ words, “slip under the radar”, lost in the everyday. Those who don’t stick out and whom you might not have noticed living around you but who simply exist, being as average as possible – with one difference.

She wanted to capture the unexpected, where it wasn’t supposed to be seen.

Boucher-Myers has enormous respect for the work of pioneer artists such as Zanele Muholi, whose work was (in)famously denounced as a perversion by former Minister of Arts and Culture Lulu Xingwana, and the “delightful” Ivan Coyote, whose much-circulated performance poem ‘To the Femmes’ praises the “invisible” lesbians who don’t fit gay stereotypes and therefore have to declare their sexuality verbally on a regular basis, often not to be taken seriously. But Boucher-Myers does not view herself as an activist per se, rather as a person in search of her tribe. She wants to find what isn’t usually seen, capture what generally goes unnoticed.

And it’s not hard to believe. Boucher-Myers herself looks deeply conventional: nails neatly painted, neatly coiffed greying hair, impeccable manners, mum of one, co-owning a successful business, namely the restaurant at the Avontuur wine estate in Somerset West. For the most part of her existence, she lived as a conservative, deeply religious Christian heterosexual.

And then the woman she refers to as “Special K” walked into her life, just in time for her 40th birthday seven years ago.

“Many things changed for me,” she says, in what one presumes is the understatement of her life. “Some things were damaged beyond repair – friends that walked out of my life because of my newfound sexuality – but some things changed for the better by infinite measures. I found my voice, which had been lying dormant my whole life.” She became interested in a more creative career path, and began exploring various means of self-expression.

But, she adds, she was also met with an unfortunate silence in some of the areas where she most wanted dialogue.

“What was glaringly obvious to me at that time was that there were no obvious lesbian role models in my immediate community,” she says. “Perhaps naively I imagined that I could go into the library or pick up a gay magazine at my local book store and find some sort of order or guideline for my rapidly changing life. But there was nothing. And so the search began to find my people, or more realistically, to find out about the community I was aligning myself with.”

It was a search that occurred behind the lens, mostly, but it was a revealing one. “My search for connection made me realise that so many of the gay women I know live very quiet lives,” she says. “Lives that for all intents and purposes go unnoticed and under the radar.”

But once she began advertising for models, the response was enormous, delivering a mass of volunteers from all over the country, aged from their twenties to their seventies. “What I wanted to capture was gay women in their immediate environment, the place where they felt most happy or with the person or people who mattered most. Environmental portraiture, if you will. And the response was overwhelming,” she says.

“What started as a small idea has grown into a historical documentary capturing the face of lesbians in South Africa.

“The mothers, daughters, activists, those trying to adopt or have babies, those who are pregnant, those on the cusp of marriage. Those who have lost a loved one. Those still in transition. These women have put a face where the label used to be for me.”

It was a step up from the library, certainly: the days of being locked up with Virginia Woolf, Vita Sackville West and Radcliffe Hall – and later she found a home in the local gay community, becoming an administrator of the Cape Town Lesbians organisation, which has grown exponentially in the last few years, now housing 5,000 members and hosting regular social and support events for them all over Cape Town.

Now, she believes, it’s crucial for the arts to move into a new area, especially where gender is concerned. Queer arts have for too long been boxed into heteronormative labels, she says – and it’s damaging.

“The stereotypical ‘dyke’ and ‘femme’ labels are archaic,” she says. “Out with the old and in with the new. New labels have evolved to capture our sexual fluidity. Hence the birth of Embodiment. Synonyms for ‘embodiment’ are also personification, label or picture – labels that we wear daily as gay women.

“For me personally, the label ‘lesbian’ is one that I do not wear with aplomb yet. I am much more than one simplistic sobriquet. I am many characteristics that do not shout ‘I am a lesbian’ at all.”

While depictions of queers in the arts and popular media have often focused on difference as a source of pride, and Boucher-Myers believes there is nothing wrong with that, she wants to include sameness, too, believing the mundane, the everyday, to also be an important source of inspiration. “My hope is that by taking these photos, capturing the day-to-day lives, doing the same things everyone else does; our interconnectedness, our ‘sameness’, our humanness, is exposed. And in so doing, perhaps make a difference in some way,” she says. “What I have learnt is that we all want the same things: a home, financial security, but mostly we want to be loved. And surely ‘loved’ is the ultimate designer label, one we should all be allowed to wear fearlessly, confidently and with joy?”

But isn’t that activism, then? Boucher-Myers isn’t anti-activism, she corrects. “In large part, this series does ask: What does it mean to be a lesbian in South Africa today? Who are the activists, the torch-bearers, and the voices of freedom? In a constitution where we are offered the same rights as our heterosexual counterparts, we have the liberty to marry whomever we choose. Or do we? On paper, freedom does not necessarily filter down to the everyday man or woman in the street, and hate crimes and prejudice are still widespread.

“There are some incredible voices that have risen out of the LGBTI darkness in South Africa; men as well as women…But this project was born out of a need to connect.

“I hope to show a softer side that has not been seen before. I want to dissect the antiquated ‘lesbian’ label that is no longer appropriate. We have evolved and changed…so many of us live sans obvious labels. I want to show us all in our multifaceted glory. I want to debunk the myth.”

From a technical point of view, Boucher-Myers keeps it as simple as possible: natural light, simple surroundings (“wherever the person is most happy or most comfortable”), letting the environment dictate the image. “I work quickly and instinctively,” she says. “The longest part is usually the filling in of the model release forms.

“I shoot with minimal equipment. A Canon 1100D, three lenses, two filters and two reflectors. I work alone, for the most part, or on the odd occasion have my son or fiancée holding the reflector boards for me. I don’t use a tripod.”

So what’s next? Boucher-Myers recently exhibited Embodiment at the Bossa gallery at the Old Biscuit Mill, and will be exhibiting at other venues in South Africa in the upcoming months. She also plans to publish the series in book form.

Her next project is called Changeling, photographing pre-teens and adolescents in transition. “I love their gawkiness, all arms and elbows. Freckles and big eyes. So grown up and yet so innocent,” she says. “The images are a snapshot of a time that is fleeting and so dear. I am always amazed at how they change right after and I am always so thankful to have recorded their transition.” DM

* If you would like to be involved in funding Boucher-Myers’ upcoming projects or would like to model, Tweet her at @zeepix. You can visit her photographic blog and keep abreast of upcoming exhibition details at http://thebholder.blogspot.com

Photos: From the Embodiment series