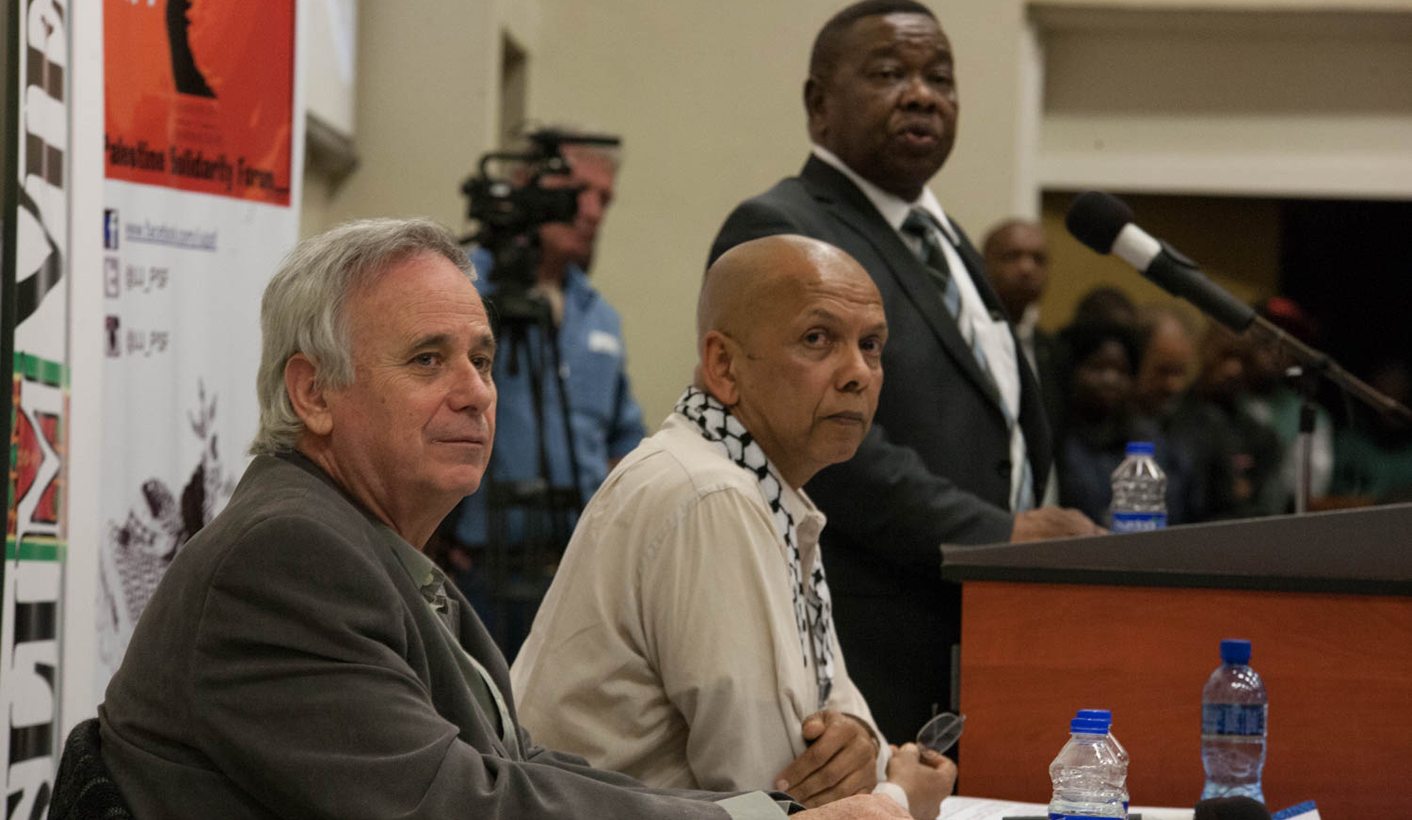 While there’s a brief reprieve in the conflict in Gaza between Israel and Palestine, the issue continues to heat up in South Africa. On Wednesday, Palestinian supporters met at the University of Johannesburg to discuss boycotting Israel. GREG NICOLSON reports.

“In many respects I felt that Israeli Apartheid is worse than South African Apartheid,” said Minister of Higher Education and Training Blade Nzimande to large applause when recalling a visit to Palestine over 10 years ago. The general secretary of the South African Communist Party (SACP) said his party thinks the Israeli ambassador should be expelled from SA, the South African ambassador should be recalled, and the SACP will help mobilise the boycott of Woolworths.

Nzimande was addressing a gathering hosted by Boycott, Divestment and Sanctions (BDS) South Africa, Muslim Views Newspaper, and the University of Johannesburg Palestinian Solidarity Forum. The newspaper brought Professor Ilan Pappe, an Israeli academic and activist who supports the Palestinian struggle, to SA to promote the idea of an academic boycott. The timing, which was a coincidence, meant much of the discussion reflected the current war in Gaza. The hall was full, with people standing and sitting on the stairs and others moving to an overflow room.

“We must also condemn the hypocrisy of the government of the United States,” Nzimande said to cheers.

“Our government stands firmly behind the Palestinians,” Nzimande told the audience.

He criticised some of the Christian groups in South Africa who have stood in solidarity with Israel, like as the African Christian Democratic Party, and said they were being mobilised on the basis of defending the Holy Land. The violence, he said, was due to denying Palestinians their right to self-determination and land policies similar to that of South African Apartheid.

The University of Johannesburg cut ties with its Israeli counterpart the Ben Gurion University in 2011 after the proposal was supported by academics, students and prominent South Africans. The SA Jewish Board of Deputies said at the time it was narrow-minded and a setback for constructive engagement.

Photo: A Pretoria student questions the speakers at the UJ event.

On Wednesday night, Professor Pappe, who was introduced as a “brave traitor” and compared to whites who fought Apartheid, called for more boycotts. He said it was difficult as a Jewish Israeli to promote a campaign effectively banning himself and institutions he could work at. It was essential, however, to convince those who wouldn’t think they had much to gain from an academic or general boycott of Israel to join the BDS movement, he explained.

“To say that [saying] I support Israel as a Jewish state is akin to saying I support South Africa as an Apartheid state,” continued Pappe, who has authored books such as Gaza in Crisis: Reflections on Israel’s War Against the Palestinians and The Ethnic Cleansing of Palestine. “Zionism believes in the extermination of the Palestinians. This is a far worse […] ideology than Apartheid was in its worst form when it was there.”

BDS is “a non-violent, humane stance against racism, state racism in the 21st century” said Pappe, who argued that people had to move beyond punting a two-state solution and start focusing on building one democratic state. The BDS efforts would be pointless otherwise, he said. “There is no point for this effort if it is not a part of a much larger campaign for full human rights […] for every Palestinian who lives in Palestine and used to live in Palestine.”

“There is no chance for a two-state solution anyway,” Pappe claimed.

“The two-state solution is like a dead body in a morgue. Every now and then an American secretary of state goes to the morgue, takes out the body, […] says it’s alive for a few days and takes it back to the morgue.” It’s difficult, he added, for any politicians around the world to support a one-state solution, but the world is looking to South Africa to lead the way and provide an alternative from the American-led proposals.

“Making Israel a pariah state, making Israel a rogue state, convincing governments to impose sanctions, following the people who already boycott is far more efficient, far more moral in my eyes, far more productive for the day after than any missile or any bomb that is thrown at people. We can have a vision which is non-violent through the BDS and ODS [one democratic state] movements,” said Pappe. He called on Nzimande and other politicians across Africa, Asia and South America to lead the way.

Wednesday’s event contrasted sharply with an Israel solidarity rally held in Johannesburg on Sunday, attended by over 10,000 people. There, speakers defended the state’s use of violence as justified and necessary given the threat to Israel. They called for peace, blamed Palestinian organisations like Hamas for the instability, and called Israel the only democratic country in the Middle East.

Supporters of Israel have consistently called comparisons between South African Apartheid and Israel-Palestine a distortion of history and an insult to the victims of National Party rule. On Sunday, there were numerous calls to keep supporting trade with Israel and to foster development between the two countries. “In South African we should be looking for a solution to the problem, not alienating and polarising. The BDS campaign is based on hate […] It is clear that these people are not concerned with solving the problem. We believe that people should sit down and get to a solution,” said South African Zionist Federation vice chairman Ben Swartz recently.

The BDS movement, however, is supported by the ANC, COSATU and the SACP, as well dozens of other organisations. The recent conflict in Gaza, which had a death toll of almost 1,900 Palestinians and 67 Israelis before a 72-hour truce began on Tuesday morning, has led to calls to boycott Woolworths and other retailers stocking products from Israel.

He also said the Department of Higher Education and Training “would be amenable” to opening Middle Eastern studies departments at universities to deepen knowledge of the issues and maybe collaborate with Palestinian institutions.

Supporters of Palestine are planning a number of demonstrations this weekend to show solidarity and push the boycott campaign. DM